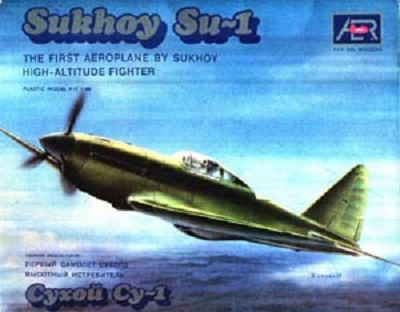 In 1939, the Sukhoi and Mikoyan aircraft groups started designing new high speed and high altitude type fighters. The main goal to be achieved, while designing the SU-1 fighter (also known as the 1-330) was to improve aerodynamics and diminish the whole construction weight.

A more compact fighter, with a M-105P engine of 1100 hp., was chosen as compared to the AM-35 engine used in the MIG-3. The M-105P engine altitude performance was lower than the AM-35 which demanded turbo-compressors running on the exhaust gases.

The plane had an unusual design. The water radiator scoop was placed under the cockpit. The radiator itself was arranged in the fuselage behind the the cockpit, with an outlet in the fuselage top. This helped to make the cowling of the plane much smaller.

The plane was constructed in the following way: wooden fuselage with the cowling area made of removable metal panels, all metal wings, metal ailerons, elevators and rudder covered with cloth, SHVAK cannon of 20 mm was placed in front of the cockpit in the vee of the engine to fire through the prop spinner, two synchronized SHKA5 machine-guns of 7.62 mm were arranged above the engine.

The SU-1 was factory tested in late 1940. All the design data was checked. The test pilot admired the plane and was looking forward to seeing it in the regular army.

However, frequent turbo-compressor faults destroyed the designer's and the pilot's plans and did not allow the aircraft to go into production beyond the one prototype.

The plane's top was painted in Khaki and the underside was light blue. It did not have any identification marks of any kind.

Years ago (more than I care to remember) I answered a classified ad in the back of the (now defunct) Scale Modeler Magazine.

A fellow in Krakow Poland wanted an American pen pal to trade model kits with. I corresponded with him and told him I was interested in any WWII aircraft or armor kit that I did not already have.

The AER 1/72nd scale SU-1 was one of the kits that he sent me.
This is a really obscure and off-beat subject. Mainly because only ONE was ever built.

This kit is now out of production with AER, but I noticed that another company has the aircraft listed under their brand. This is Interavia kit no. ITV-15. It may very well be the same mold??

I was recently re-arranging my stash in the basement and came across a whole carton of various kits that I received from this pen pal.

A lot of them are really obscure kits of things and I thought the readers would be interested in this one.
​THE KIT:

AER is based in Moldova.

The kit came in a very flimsy end-opening type box. It was not shrink-wrapped and is held shut with tape. The cardboard was of such soft and low quality that the box got very crushed. However, the contents were in good shape with only the prop spinner breaking off the larger tree of parts.

I am no fan of end-opening boxes, as I have said many times before. This is because parts or the decal sheet will find their way past one of the end flaps to become lost forever. Give me a tray and lid type box any day of the week.

The box art shows the Su-1 flying above the clouds. It is green over a light blue undercarriage and shows absolutely no markings. The actual aircraft was unmarked.

The bottom of the box serves as the painting guide. It shows a top, bottom and side view of the Su-1, with a green top and light blue undercarriage with no markings. A list of it's specifications is supplied in Russian and English. 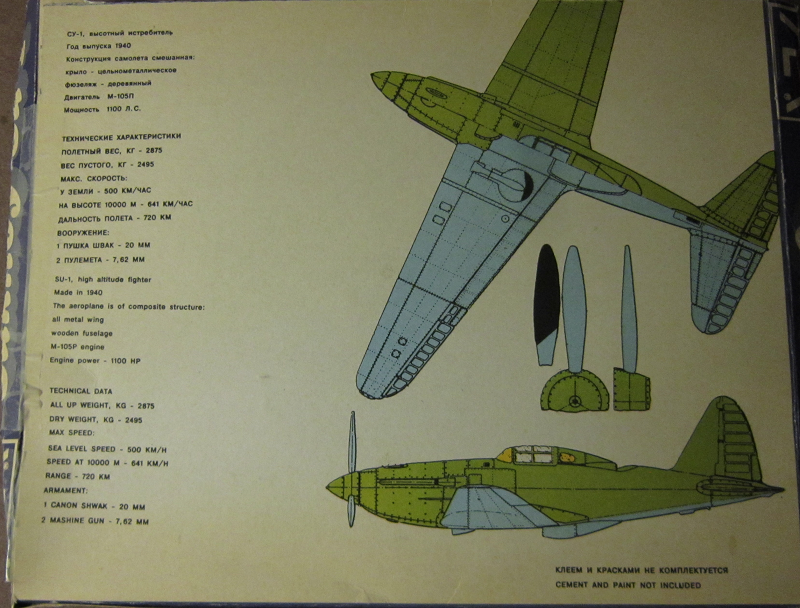 There is one large tree of dark green parts and a small tree of clear parts in the kit. 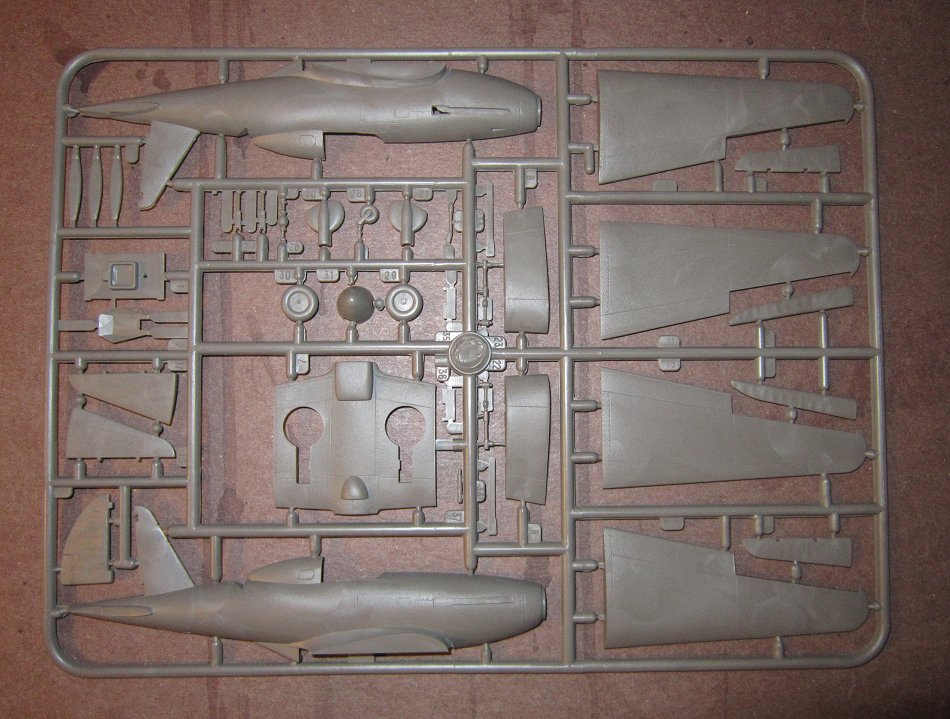 ​The instructions consists of a single-sheet folded in the center to create 4 pages in 7 1/2" x 10" page format.

Page 1 begins with a black and white repeat of the cover art, followed by the history of the Su-1 in English and Russian with specifications of the aircraft.
Pages 2 & 3 gives a total of 9 assembly steps.

Page 4 has the parts trees illustrations, international assembly symbol explanations, a color listing and pictures of how to use hobby tools. There is also a 6-view of the aircraft.

The cockpit parts are pretty sparse. So this is an area that could really be added to.

The seat back is also unusual, in that it is shaped like a pentagon. I don't know how accurate that is, because this is really an obscure aircraft and I doubt any pictures were ever taken of the interior that a person could find anyplace.
This was a very smooth aircraft and panel lines, and a few rivets, on the kit parts are well done and engraved.

Air intakes, under the fuselage, are all molded open nicely. A small, tear-drop shaped, window at the rear of the cockpit on each side will have to be drilled out and some crystal clear used to create clear glass there.

This aircraft had landing gear that operated like the gear on the P-40.
It rotated and then folded rear-wards into the wings. I also thought that, in profile, it kind of looked like the Italian Macchi 202 fighter.

One can only speculate how it would have been in combat if the SU-1 had ever got the bugs worked out in the turbo-compressor.

I recommend this kit to any modeler. It will be an easy build, with no decals to worry about because it had no markings.

However, it could really be a contest winner if more detail was added to the cockpit and better clear parts were vacuformed over the kit ones and used.
The kit supplied ones are thick and about as transparent as a coke bottom bottom.

I have some other odd-ball and obscure aircraft kits, sent to me by my pen pal in Poland, and will probably review them in the future.