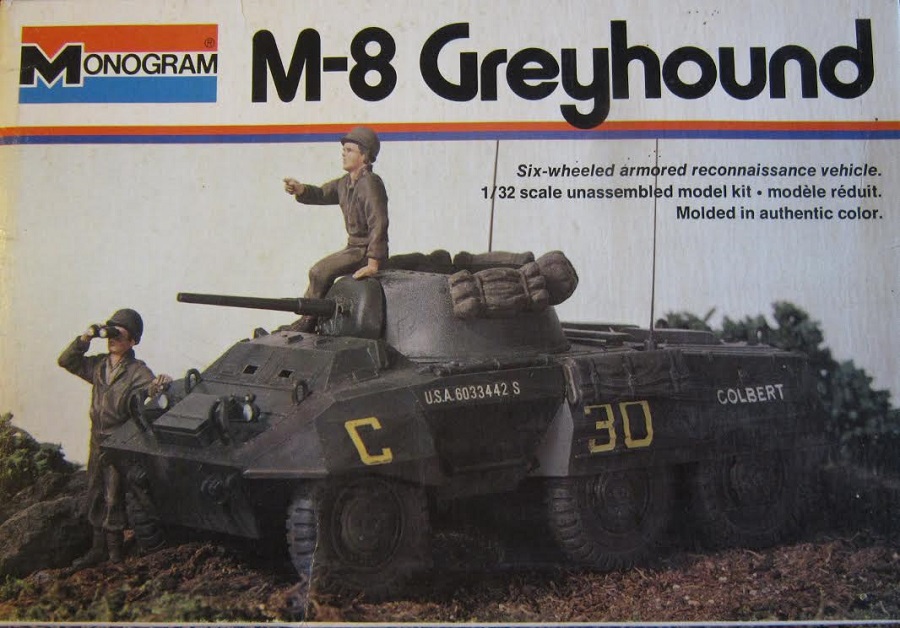 The M8 light armored car is a 6x6 armored car produced by the Ford Motor Company during World War II. It was used by the United States and British troops in Europe and the Far East until the end of the war.[2] The vehicle was widely exported and as of 2006 still remains in service with some third world countries.

In British service, the M8 was known as the "Greyhound". The British Army found it too lightly armored, particularly the hull floor, which anti-tank mines could easily penetrate (the crews' solution was lining the floor of the crew compartment with sandbags). Nevertheless, it was produced in large numbers. The M8 Greyhound's excellent mobility made it a great supportive element in the advancing American and British armored columns.

In July 1941, the ordnance department initiated the development of a new fast tank destroyer to replace the M6 37 mm gun motor carriage, which was essentially a ¾-ton truck with a 37 mm gun installed in the rear bed. The requirement was for a 6x4 wheeled vehicle armed with a 37 mm gun, a coaxial machine gun mounted in a turret, and a machine gun in the front hull. Its glacis armor was supposed to withstand fire from a .50 in (12.7 mm) machine gun and side armor from a .30 in (7.62 mm) machine gun. Prototypes were submitted by Studebaker (designated T21), Ford (T22) and Chrysler (T23), all of them quite similar in design and appearance.

In April 1942, the T22 was selected, despite complaints about deficiencies, due to the need for vehicles. By then, it was clear that the 37 mm gun would not be effective against the front armor of German tanks; so, the new armored car, now designated the M8, took on a reconnaissance role instead. Contract issues and minor design improvements delayed serial production until March 1943. Production ended in June 1945. A total of 8,523 units were built, excluding the M20 armored utility car.The M8 was manufactured at the Ford Motor Company plant in Saint Paul, Minnesota.

In May 1942, having viewed the prototype, the British Tank Mission turned down the offer to acquire the M8 through Lend-Lease. It was named "Greyhound" in keeping with other U.S. armored cars already ordered by the British, such as the (cancelled) T18 Boarhound, the T17 Deerhound, the T17E1 Staghound and the (also cancelled) M38 Wolfhound.

The M8 was fitted with a 37 mm M6 gun (aimed by an M70D telescopic sight) and a coaxially mounted .30 in (7.62 mm) Browning machine gun in a one-piece, cast mantlet, mounted in an open-topped, welded turret. The M8 was initially fitted without any kind of anti-aircraft defense; as a stopgap solution, a .50 caliber Browning M2HB machine gun on a ring mount was retrofitted to nearly all vehicles already in service. A purposefully-designed pintle was mounted on all late-production vehicles, but it saw comparatively little action due to a troubled development process.

The vehicle carried 80 37 mm rounds (16 in the turret and 64 in an ammunition rack in the right sponson) when fitted with a single radio. Vehicles with a second radio installed only carried 16 main gun rounds. Some units solved this problem by cutting up the removed main ammunition rack and stowing 18 rounds in each sponson, under the radios. This raised the number of main gun rounds able to be carried to 52. Another modification (the most common one) involved fabricating (again from the discarded main ammunition rack) a 43-round bin to be placed behind the driver's seat, and a 20-round bin attached to the framing of the turret basket. This raised the ammunition capacity up to 79 rounds. Machine gun ammunition consisted of 1,500 .30 caliber rounds and 400 .50 caliber rounds. In addition, the vehicle carried a mix of 16 smoke and hand grenades, four smoke pots, six M1 anti-tank mines and four M1 carbines for the crew.

The M8 was powered by a Hercules Model JXD in-line six-cylinder 320 in³ gasoline engine giving it a top speed of 55 mph (88 kph) on-road, and 30 mph (48 km/h) off-road. With a 59-gallon fuel tank and an average fuel consumption of 7.5 mpg, it could manage an average road range of 200-400 miles (320-640 km) The Hercules JXD ran more quietly than other engines of comparable power, which helped the M8 maintain an element of surprise and reduce the chance of being heard by the enemy. Because of this, the M8 armored cars in Patton's

Third Army were known as "Patton's ghosts", since they were almost never detected by the Germans until it was too late.

​Monogram is an older prolific model company based in Morton Grove, IL U.S.A. They make all manner of model subjects in the popular scales. However, I think over the years they dropped 1/32nd scale (the scale of this kit) for AFV models and now do them in 1/35th.
​THE KIT:

The box art shows a M-8 parked in a field near some bushes and a rock. It is in overall olive-drab with a yellow letter C on the sides of the front of the side skirts, followed by a white serial number U.S.A. 6033442S, then a yellow 30 followed by the nickname COLBERT in white.

A crewman is sitting on top of the turret and pointing. A second crewman is standing behind the nose of the M-8 and looking through a pair of binoculars.

One side panel has 2 color walk-around type photos of the model make up in the box art scheme, followed by "1/32 scale model kit. Details may be painted to match photo on the box", over Monogram Models INC's street address in Morton Grove, IL and MADE AND PRINTED IN THE U.S.A.

The other side panel has a little history and a list of the kits features: The kit has bedrolls, tarps and storage packs strapped to the sides. Ther turret turns and the guns move up and down. The undercarraige is detailed with shock absorbers, drive shafts with U-joints, transfer cases and differentials. The kit includes 2 crewmen and authentic decals. Cement and paint not included.

This is followed by a color side view of the M-8 made up in the box art scheme and Monogram's street address in Illinois again.
​WHAT'S IN THE BOX:

This kit contains 5 olive-drab trees of parts, the decal sheet and the instructions.

Parts trees are all loose and not in cello bags.

The instructions consist of a single sheet, folded twice to fit the box. It begins with the history of the M-8 in English, followed by READ THIS BEFORE YOU BEGIN instructions, a copyright date of 1976 and MADE IN U.S.A.

There are 8 assembly steps, a list of additional parts, decal application and painting instructions (that say to use the box art for the painting) and information about the crew figures.

There are no parts trees illustrations in the instructions or any clear parts.

The trees are numbered, but not alphabetized. 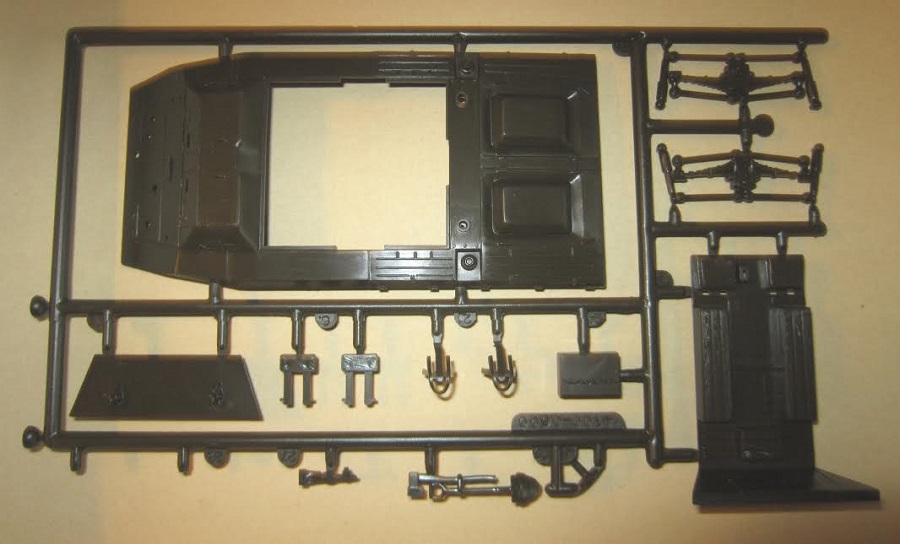 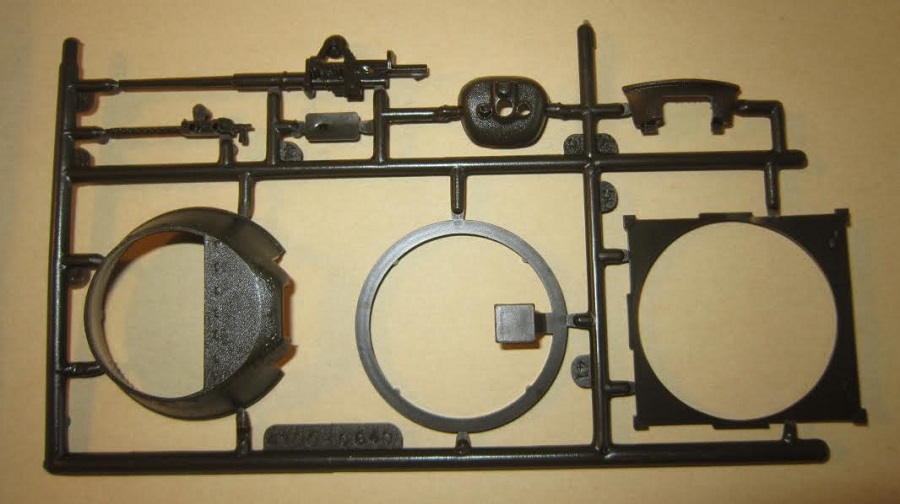 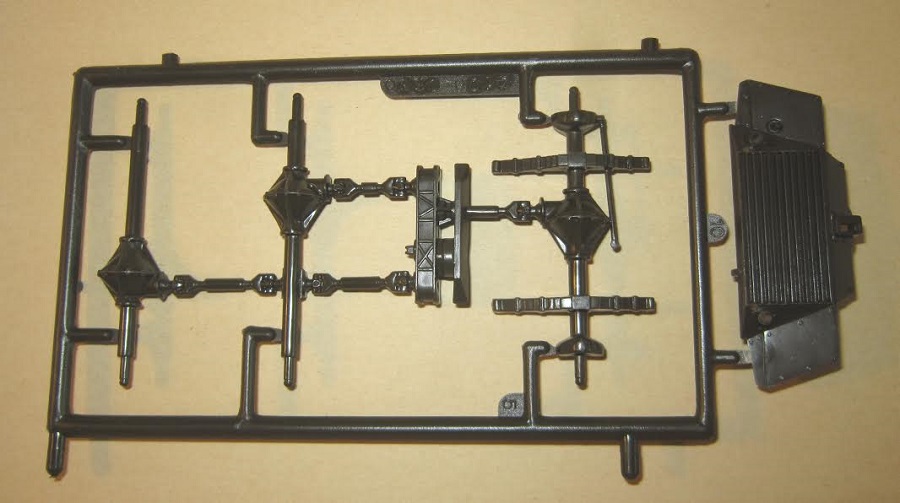 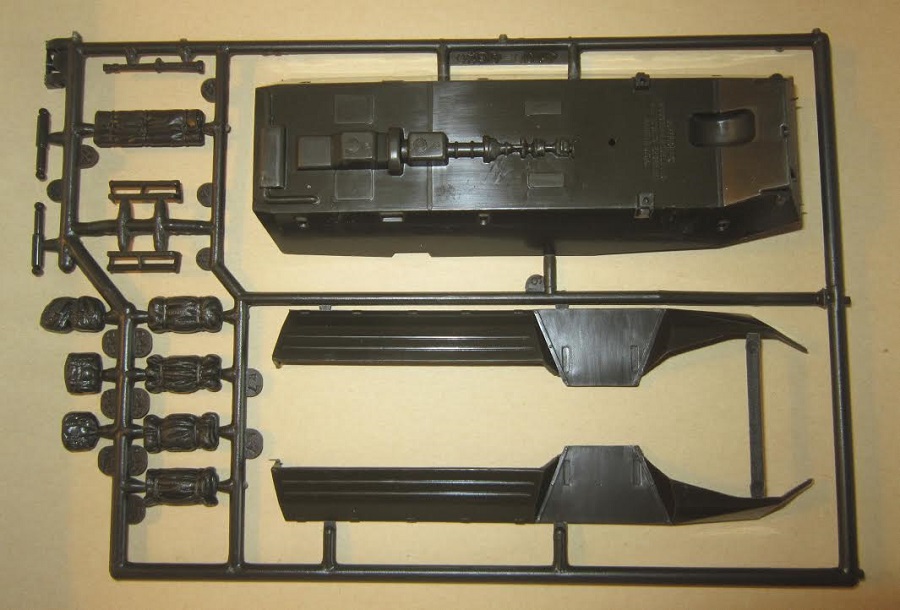 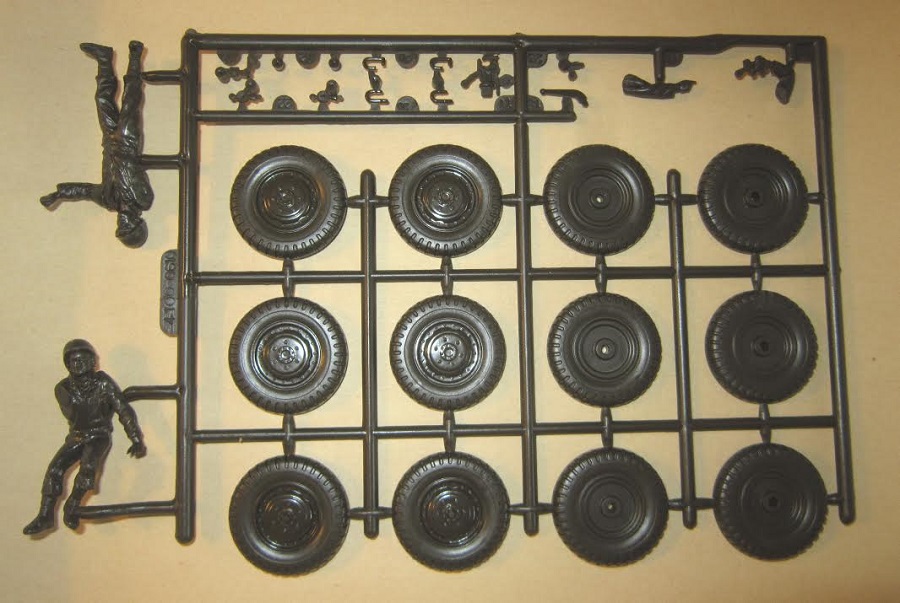 The decal sheet, with just the lone box art scheme marks on it completes the kit's contents. 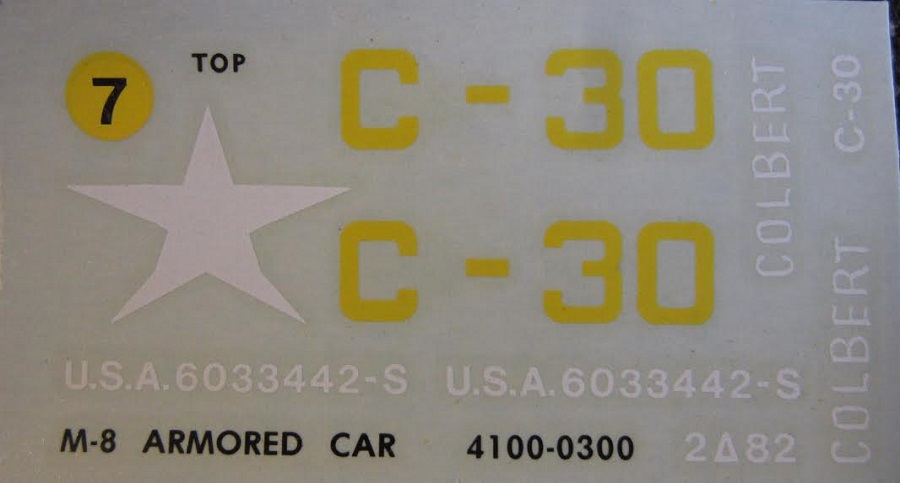 This kit was compliments of my wallet 40 years ago.