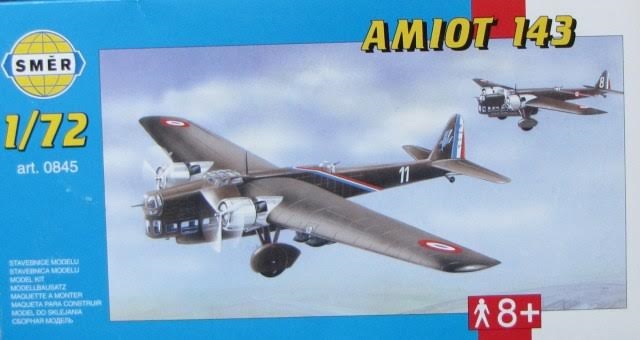 The Amiot 143 was a French bomber. Unlike most of the ugly and indifferent French multi-engined combat aircraft built between the world wars, the 143 saw a lot of action in the spring of 1940. It’s origin ws a 1928 Multiplace de Combat specification for a day and night bombing, reconnaissance and escort aircraft. The Amiot 140, flown in April 1931, beat three other prototypes and led, via the Hispano-powered 142, powered by two 740hp Gnome-Rhone 14Krsd two-row radial engines.

In November 1933, an initial order for 30 was placed. These were designated BCR (Bombardment, Chasse, Reconnaissance), but were destined to serve as five-seat night bomber and reconnaissance machines. Features included a large and roomy fuselage littered with windows, turrets and gun positions (originally fitted with Lewis machine guns, but eventually carrying a total of four 7.5 mm MAC 1934 machine guns), an extremely thick wing with no flaps, but long narrow ailerons. A mainly unstressed skin of light alloy throughout, fixed spatted landing gear, and a bomb load of up to 900 kg (1,984 lbs) in racks on the left side of the centre fuselage.

They were solid, lumbering, reliable and quite popular aircraft, which on two 900 hp GR14 Kris/Kjrs Mistral Major engines had a performance that still looked good in 1935 (when deliveries began to GB III/22 at Chartres), but proved suicidal in the face of the Bf 109 five years later.

By 1937, a total of 138 Amiot 143’s had been delivered, but several later prototypes, mostly with more powerful engines and retractable main gears, had failed to secure orders. The Amiot could defend itself against attack from any direction (unlike the early Wellington, with its power turrets unable to fire to the beam), but was a sitting duck for modern fighters flown with determination. By 1940, about 60 were still in use, with GBI/34, II/34, II/35, I/38 and II/38. After arduous ten-hour leaflet raids through the winter they plunged into heroic bombing missions on May 10th, 1940.

The classic mission was the daylight attack by GB I/38 and II38 on the Sedan bridges from 750 m (2500 ft). A single survivor, shot to pieces, came back. By night, however, only four aircraft were lost in 197 sorties during which 153,600 kg (338,636 lbs) of bombs were dropped. These tough old buzzards continued in North Africa, some serving with the Allies in Tunisia until February 1944.
​THE KIT:

The kit comes in a shrink-wrapped sturdy tray and lid type box. The box is a little blousy and could have been a couple inches narrower.

The box art shows two Amiot 143’s flying along. The lead aircraft has the white number 11 on the rear fuselage with a diagonal red, white and blue stripe in front of it. There is a blue diving eagle insignia on the tail. This is the single marking provided on the decal sheet along with the large white numerals E-171 that go underneath the wings.

The second aircraft on the boxart has the white numeral 8 on the tail, the same diagonal stripe, but the stripe has the French roundel in the middle of it (this roundel over the stripe is not present on the lead aircraft).

I like the box art, as it is not covered with a lot of text and can be perhaps framed and hung on the wall. A lot of good artwork on kit boxes are festooned with text making them worthless to do this.

Inside the box are 70 parts molded in medium gray and clear plastic. These are in three cello bags. There is one medium gray parts tree and individual fuselage and wing halves. The clear parts are the many windows on a single sprue and two loose parts that make up a display stand. The decal sheet and instructions complete the contents.

There is one part tree in the kit that has all the parts on it, other than the wings, fuselage and (of course) the clear parts. It holds the props, bombs, main wheels, spatted landing gear, engine cowling fronts, machine-guns, under-wing bomb shackles, horizontal tail surfaces and their support arms etc. (46 parts)

The instructions consist of a single large sheet that folds out into 4 pages.

Page one of the instructions begins with a black and white repeat of the box art. This is followed by the history of the Amiot 143 in Czech only.

Pages 2 and 3 have a total of 15 assembly step drawings. To the left of these drawings (from what I can determine) is a blow by blow text of instructions in Czech only of how to proceed with the assembly. It would have been nice if this had been in English also.

A study of the assembly steps reveals that there are absolutely NO interior parts provided in the kit. This is especially sad in the cockpit area and the lower gondola, which are voids covered by a lot of windows. Some judicious scratch-building here would sure help as these areas are big greenhouses.

Page 4 has a three view drawing of the only marking in the kit (already mentioned above). It is overall khaki with bright aluminum cowlings. We are not told what outfit this represents. This is followed by a customer service coupon (again only in Czech) and a list naming all the parts in the kit (in Czech). The numerals on the decal sheet for this marking are printed in a cream color.

The box art does not bear that out, showing them as chalk white. At first, I thought that these numerals had yellowed on the decal sheet with age. However, the white in the roundels and on the fuselage stripe are bright white so that is not the case.

The Amiot 143 was a real homely aircraft, but had a certain beauty to it anyways. France, early on, produced some real slab sided aircraft and this was one of them. It will be a welcome relief from all the Bf 109’s and Fw 190’s flooding the market.
The kit fuselage pieces. 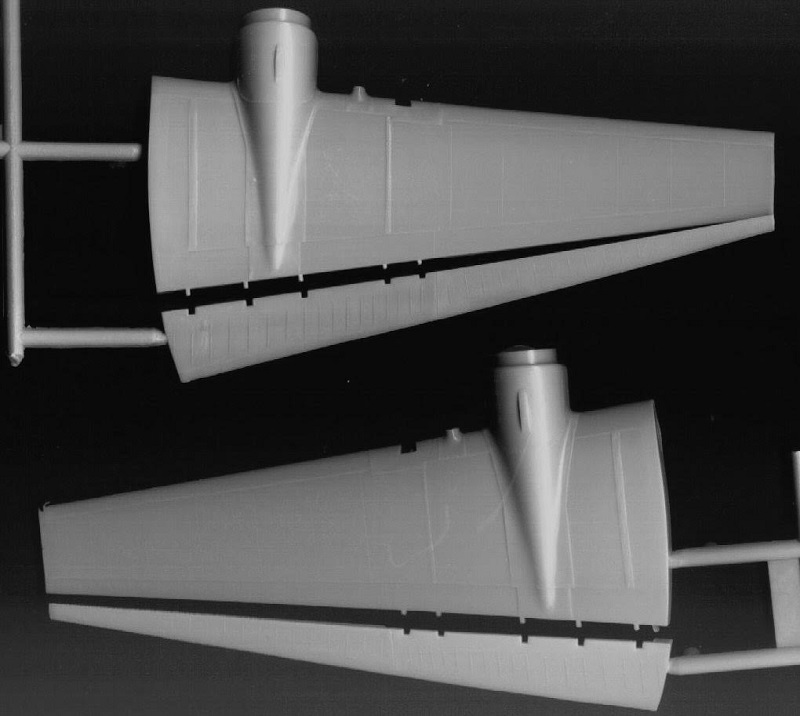 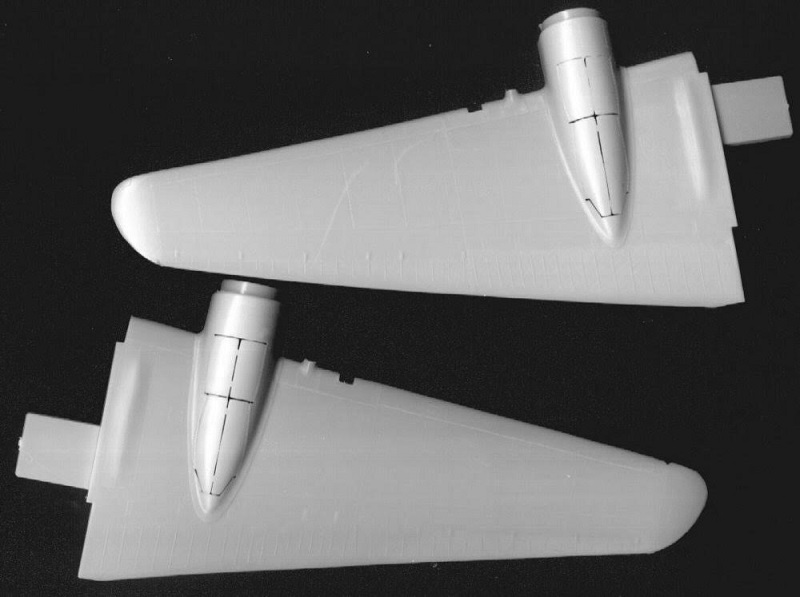 The transparencies include the side windows, cockpit canopy, etc. 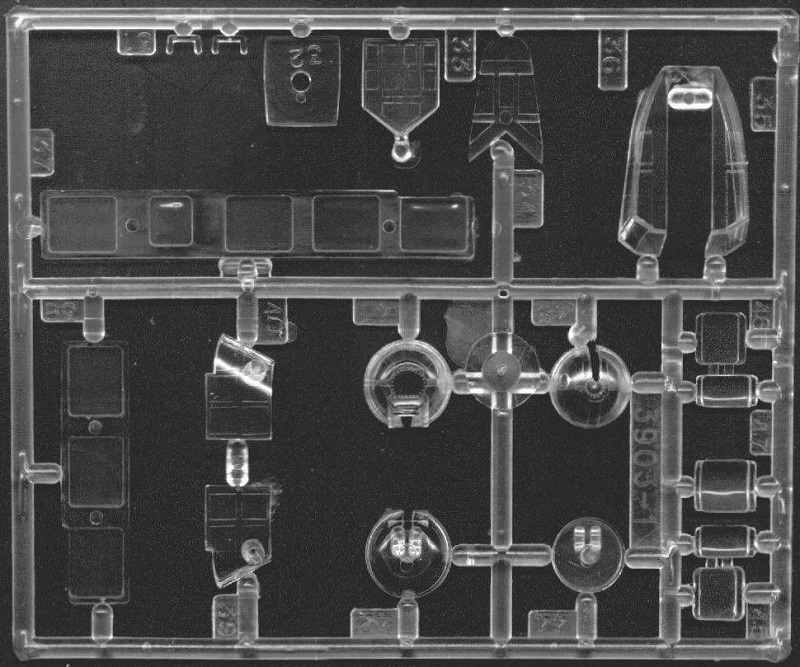 The last item is the decal sheet described above. 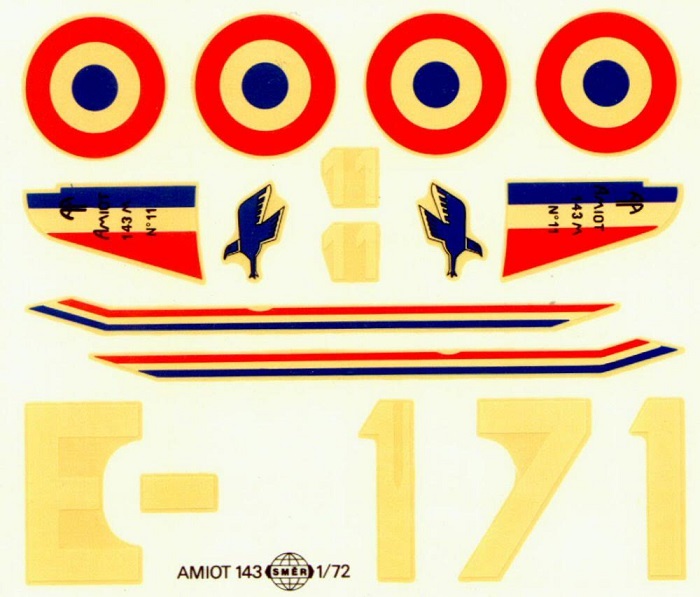 ​
The kit is state of the art for 20+ years ago and the panel lines and detail is mostly raised. This may not please some modelers. However, in the hands of a good modeler it can be made into an attention getter on a shelf.

I got this kit in trade with a modeler in Warsaw years ago.