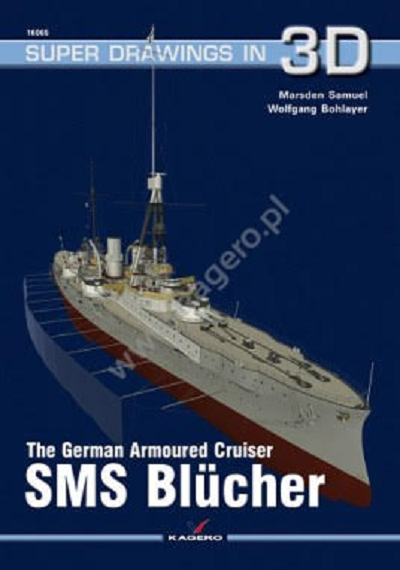 The ship was named after the Prussian Field Marshal Gebhard von Blücher, the commander of Prussian forces at the Battle of Waterloo in 1815.

Blücher was built at the Kaiserliche Werft shipyard in Kiel between 1907 and 1909, and commissioned on 1 October 1909.

The ship served in the I Scouting Group for most of her career, including the early portion of World War I. She took part in the operation to bombard Yarmouth and the raid on Scarborough, Hartlepool and Whitby in 1914.

At the Battle of Dogger Bank on 24 January 1915, Blücher was slowed significantly after being hit by gunfire from the British battlecruiser squadron under the command of Vice Admiral David Beatty.

Rear Admiral Franz von Hipper, the commander of the German squadron, decided to abandon Blücher to the pursuing enemy ships in order to save his more valuable battle-cruisers.

Under heavy fire from the British ships, she was sunk, and British destroyers began recovering the survivors.

However, the destroyers withdrew when a German zeppelin began bombing them, mistaking the sinking Blücher for a British battle cruiser.
The number of casualties is unknown, with figures ranging from 747 to around 1,000. Blücher was the only warship lost during the battle.

Kagaro is based in Lublin, Poland.

The cover art shows a color illustration of the SMS Blucher, head-on and from above with its anti-torpedo nets extended.

The back cover has a color illustration of the SMS Blucher as an above stern view.

On the reverse side there are 26 more line-drawings of compartment sections of the Blucher, also in 1/350th scale. The sheet is folded 4 times and then inserted into the book.

This book will be of great interest to modelers and naval historians alike.
Combrig Models brand makes a kit of the SMS Blucher in 1/350th scale. Copyright 2013.

This book is highly recommended.

Casemate is the N. American distributor of Kagero books. All Kagero titles can be seen on Casemate's web site at:
www.casematepublishers.com