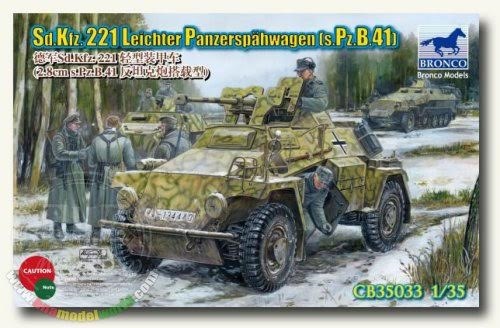 The Leichter Panzerspähwagen (German: roughly "light armoured reconnaissance vehicle") was a series of light four-wheel drive armoured cars produced by Nazi Germany from 1935 to 1944.
Designed to meet operational requirements including reliability, run on a variety of grades of fuel, simple construction and good off-road performance the first such vehicle was the Sd Kfz 221 but this proved too small and too lightly armed, so in 1936-37 a heavier version was planned, using one of two standard chassis for four-wheel armoured cars, one with a front-mounted engine, the other rear mounted version, was used in the Sd Kfz 222, which became the standard light armoured car in German army service until the defeat of Nazi Germany.

The vehicles were developed by Eisenwerk Weserhutte of Bad Oeynhausen by using the chassis of the type Horch 108 standard heavy off-road car with an angled armoured body and turret.

Chassis were built by Horch (Auto Union) in Zwickau and assembled by F. Schichan of Elbimg and Machinenfabrik Niedersachsen in Hanover-Linden.

Used by the reconnaissance battalions (Aufklärungs-Abteilung) of the Panzer divisions, the type performed well enough in countries with good road networks, like those in Western Europe. However, on the Eastern Front and North Africa, this class of vehicle was hampered by its relatively poor off-road performance. In those theaters, it gradually found itself replaced in the reconnaissance role by the Sdkfz 250 half-track.

The Sd Kfz 222 was fitted with heavier armament and larger turret than the Sd Kfz 221 but it was still comparatively cramped and lacked top protection other than a wire screen designed to allow grenades to roll off, but this made using the main armament problematic. Co-axially mounted with the machine gun both weapons were pintle-mounted, and fitted with an elevation and traverse mechanism and floor-mounted firing mechanisms.

(In other words the turret was rotated by the traversing weapons rather than the weapons being fixed to a traversing turret. There was thus no bearing-ring and no turret basket, just a fighting compartment largely obstructed by the breaches of the weapons.

When the limitations of the vehicle were highlighted during the invasion of the Soviet Union in 1941 the Sd Kfz 222 was gradually replaced in the reconnaissance role by the Sd.Kfz. 250 half-track, but the turret and armament of the Sd Kdz 222 was sometimes retained, despite its shortcomings (the Sd Kfz 250/9 variant was a Sdkfz 250 fitted with a top plate surmounted by the same turret used for the Sd Kfz 222 with the same pintle-mounted guns refitted to the half-track) and captured Sd Kfz 222s were examined by Soviet designers before they created the similar BA-64 light armored car.

Front and sides were made of 8 mm (0.3 in) RHA; thinner 5 mm (0.2 in) plates protected the top, rear, and bottom. Cast vision ports later replaced ports cut into the armour. The open-topped turret was fitted with wire mesh anti-grenade screens. Beginning in 1939, the front armour was increased to 14.5 mm (0.6 in). In 1942, the Ausf. B chassis was introduced; this had 30 mm of frontal armour, as well as a more powerful engine.
​THE KIT:

Bronco is a prolific model company based in Hong Kong.

The box art shows a Sd.Kfz. 221 in the for  ground with 2 half-tracks in the background. They are parked in a snow-covered clearing in a woods. Next to the 221 is an officer and two enlisted men talking. They all wear winter gear and the officer is shouldering a captured Soviet sub machine gun and has a pair of binoculars around his neck.

The 221 is in a base of earch yellow with dark green thin wave bands. A crewman wearing earphones is manning the gun. Another crewman is exiting the side hatch. The 221 carries the white license plate on the front with black lettering SS-134440.

The 2 halftracks in the background csarry the same camouflage pattern as the 221 and one of them shows 2 crewmembers standing in it with steel helmets.

One corner of the box art says that the kit is for modelers 14 and older.

One side panel of the box says there are decals for Germany above a color illustration of the modern German flag. This is followed by photos of the decal sheet and the brass PE fret included in the kit. Next is the comment again that the kit is for mdelers 14 and older in 10 languages including English. Bronco's street address in Hong Kong, China, their e-mail address and web address are provided.

The other side panel has a full color 4-view of the 221 in overall panzer-grey with white skeletal crosses on the sides and the license no. WH-12625. This is followed by the warning to keep the kit away from kids under 3 due to small parts with sharp points that they may accidentally ingest.
​WHAT'S IN THE BOX:

This kit contains 11 medium-grey parts trees and a clear tree, some metal springs, a large decal sheet and a small one and a brass PE fret. These last 4 items are in a zip-locked cello bag.

The instructions complete the kits contents. It consists of a staple-bound booklet printed on slick coated paper on 16 pages in 8 1/4" x 11 1/2" page format.

Page 1 begins with a color repeat of the box art, followed by the history of the Sd.Kfz. 221 in English, German and Chinese.

Pages 4 through 14 give a grand total of 21 assembly steps.
​Page 15 has two 4-views for marking and color schemes.

2. A 221 of an unknown SS unit, Russian Front, 1942. It is in a base of dark yellow with red brown and dark green narrow squiggle camouflage.

4. A 221 again of an unknown unit, Eastern Front, with truck style road wheels, 1943. It is in a base of dark yellow with wide wavy bands of dark green and red brown

The copyright date at the bottom of the page is 2009.

Medium-gray letter A parts tree holds: the top and bottom of the body, the drive chain, frame members etc. (11 parts) 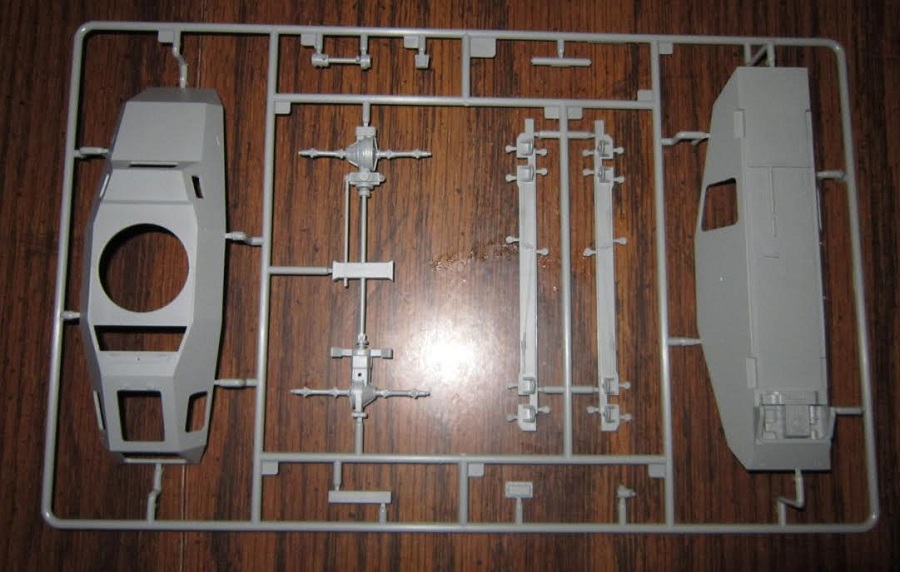 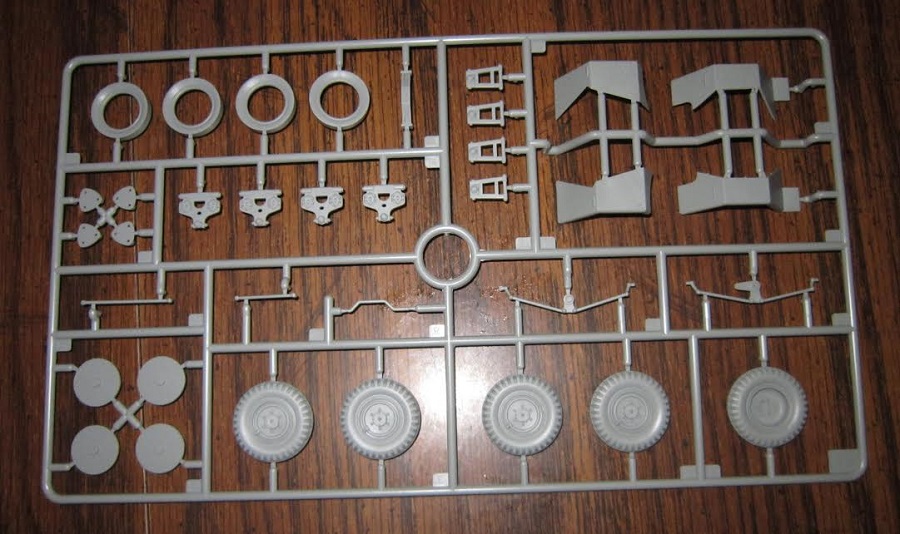 ​Medium-gray letter C parts tree holds: hatch doors, turret parts etc. (51 parts) 14 of these parts are shaded out in the parts trees illustration as being excess and not needed to complete the model. 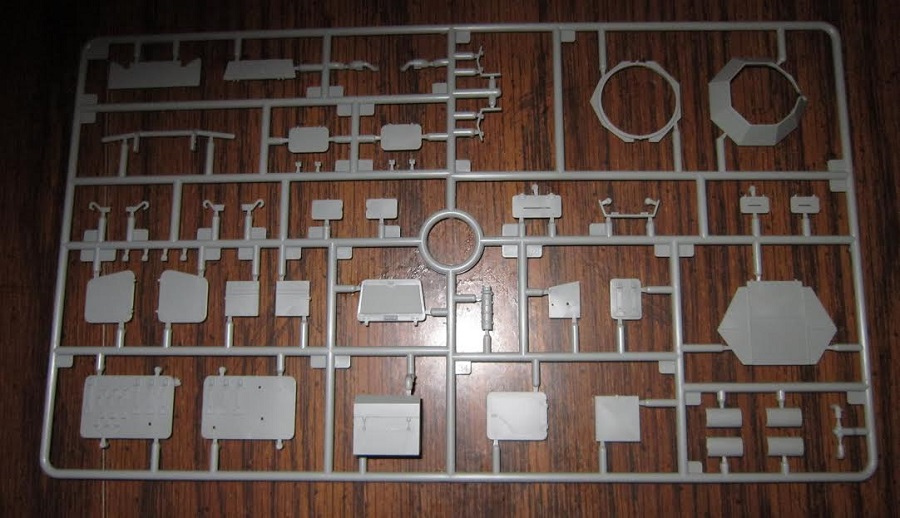 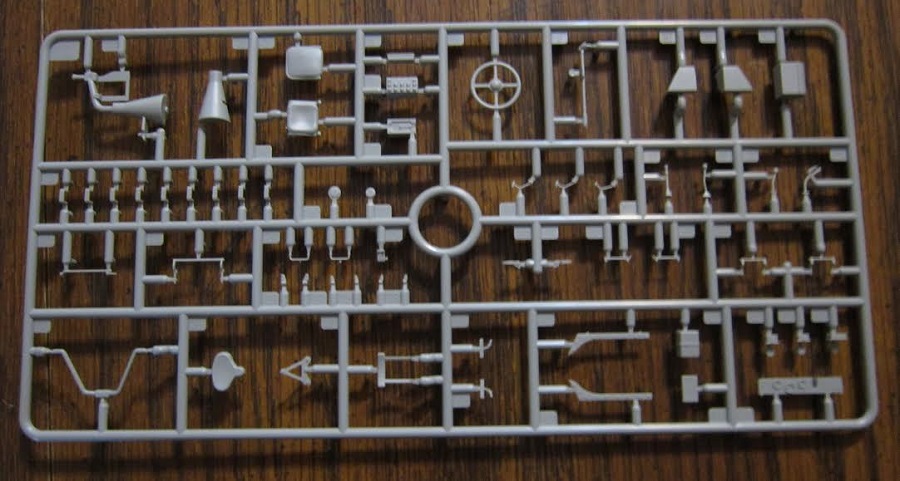 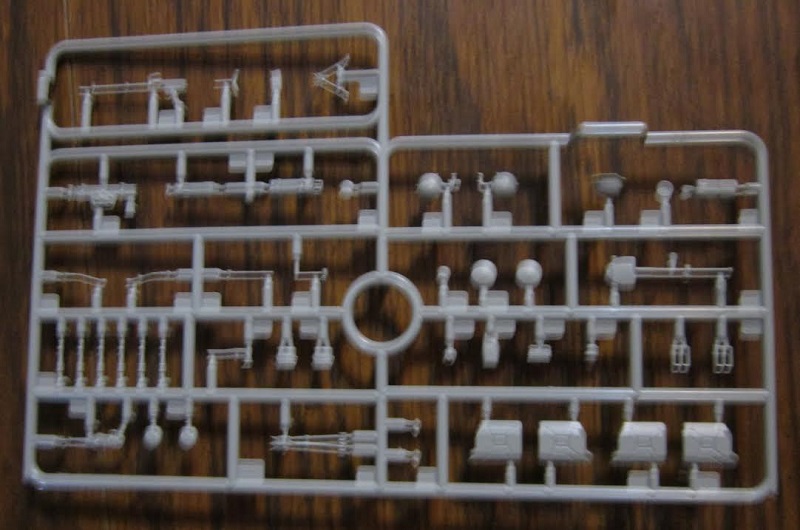 There is no letter G parts tree. 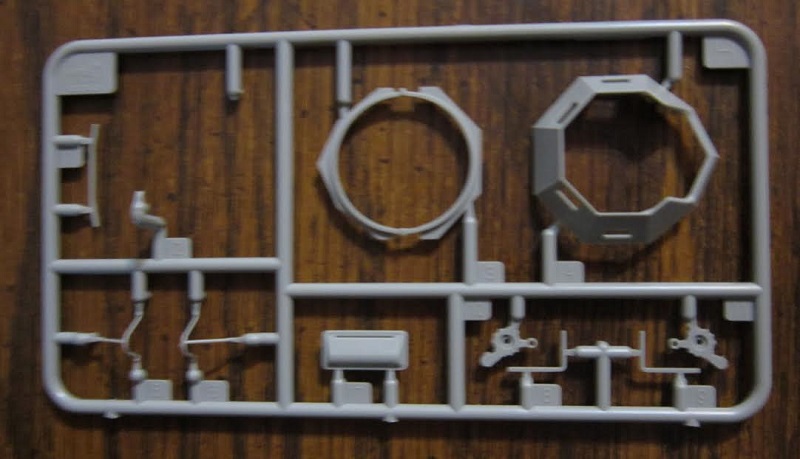 There is no letter K parts tree. 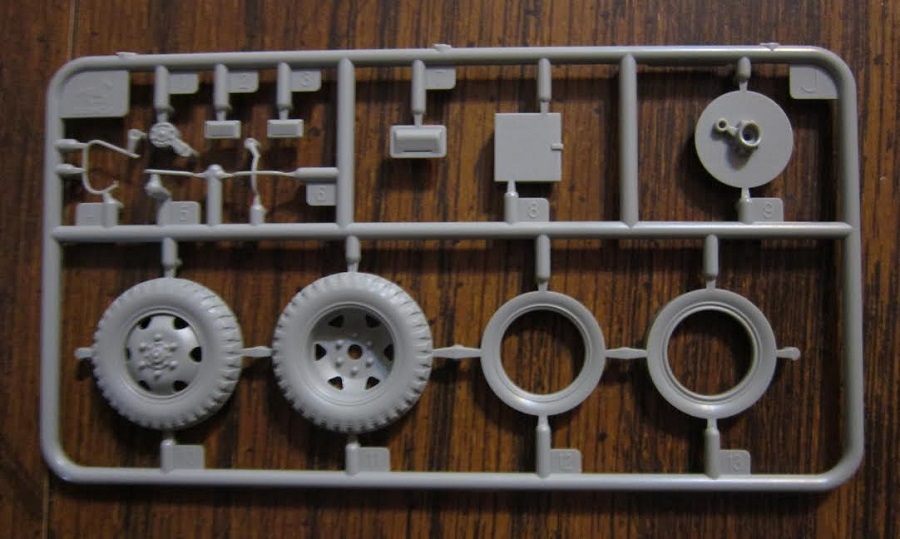 ​Letter L is the smaller sized metal springs. There are 2 of these.
​Lettering now jumps to the letter P brass PE fret. I wont attempt to name these parts. There are approximately 40 parts here. 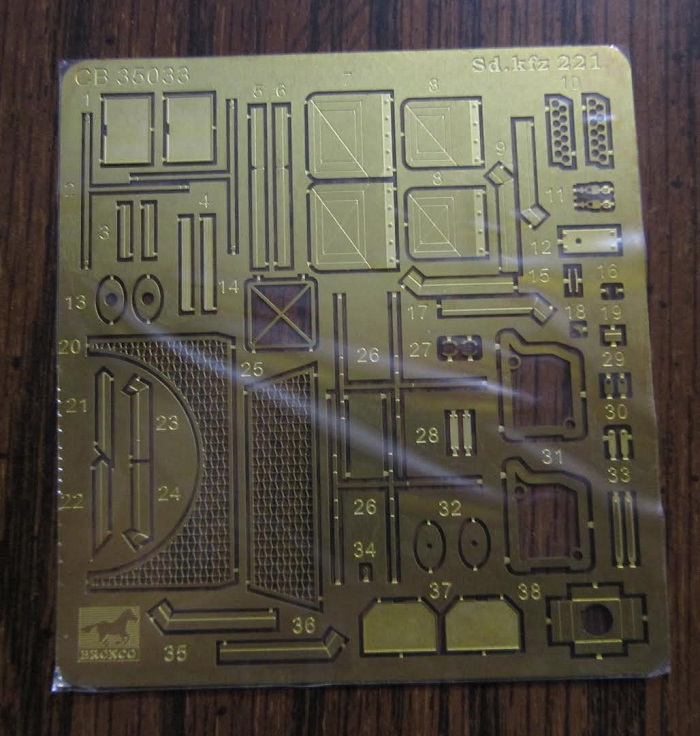 ​Finally there are the 2 decal sheets. A larger one with the license plate numbers and crosses and a tiny one with just some white numbers on it. 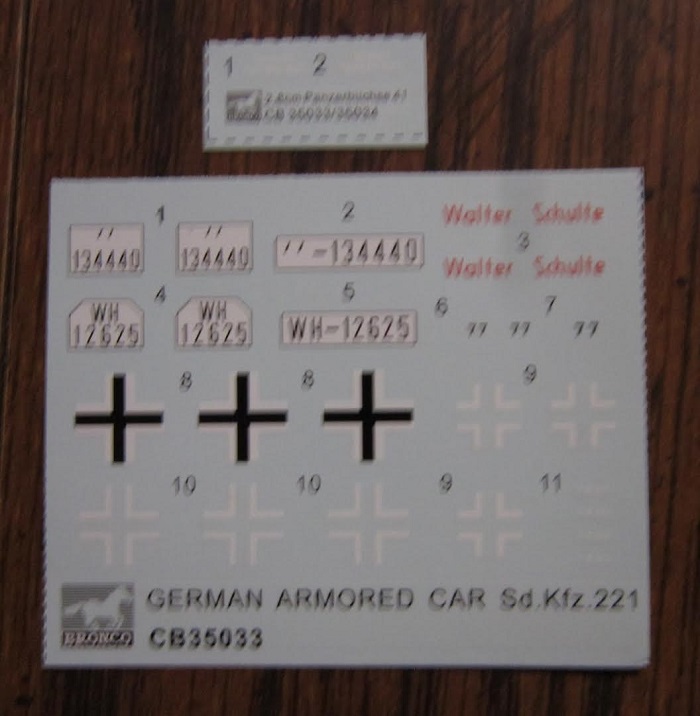 ​This is a highly detailed kit. Unfortunately there are no crew figures provided and I wish that the markings weren't all UNKNOWN units. That just shows a lot of lack of research on Bronco's part.
​Because of the high parts count and complexity of the kit I can only recommend it to advance modelers.