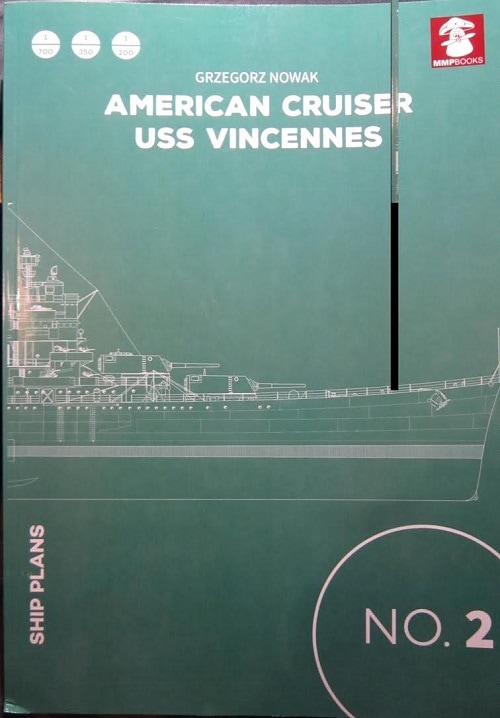 The USS Vincennes (CA-44) was a United States Navy New Orleans-class cruiser, sunk at the Battle of Savo Island in 1942. She was the second ship to bear the name.

She was laid down on 2 January 1934 at Quincy, Massachusetts, by the Bethlehem Shipbuilding Company's Fore River plant, launched on 21 May 1936, sponsored by Miss Harriet Virginia Kimmell (daughter of Joseph Kimmell, mayor of Vincennes, Indiana), and commissioned on 24 February 1937, Captain Burton H. Green in command.

The New Orleans-class cruisers were the last U.S. cruisers built to the specifications and standards of the Washington Naval Treaty of 1922. Such ships, with a limit of 10,000 tons standard displacement and 8-inch caliber main guns may be referred to as "treaty cruisers." Originally classified a light cruiser when she was authorized, because of her thin armor, Vincennes was reclassified a heavy cruiser, because of her 8-inch guns. The term "heavy cruiser" was not defined until the London Naval Treaty in 1930. This ship and Quincy were a slightly improved version of the New Orleans-class design.

The cover art is a white line drawing of the U.S.S. Vincennes against an all green background.

The first plan in the book is to 1/350th scale. It shows the U.S.S. Vincennes CA44 1942, American Heavy Cruiser, New Orleans Class middle and stern section from the side and the bow and middle section from above.

The reverse side of the first plan shows the Vincennes in 1/30th showing a side profile of the forward and center part of the ship and an above-view of those sections.

The second plan has illustrations of the inner bulkheads of the Vincennes to 1/350th scale.

The reverse side of the second plan has a 1/350th head on bow view and stern view, illustrations of the propeller guard, 1.1' gun shield on the main deck , bollards (1/175 scale), propellers, stowage , aviation workshop and storeroom, crew's washroom & W.C., the main and well deck plan and the upper deck plan.

The reverse side of the third plan has illustrations in 1/350th scale of the construction of the superstructure showing a stern and starboard view of it, a 1.1 in AA gun, main mast & S.C. search radar antenna, 36 in searchlight, searchlight platforms, main funnel, 40 ft. motor launch, 26' motor whaleboat, aft funnel and the catapult towers on the port and starboard sides.

The reverse side of the fourth plan has a 1/200th scale side view showing the  stern of the Vincennes.

The fifth plan shows the center section side view of the Vincennes in 1/200th scale.

The reverse side of the fifth plan shows the bow section of the Vincennes side view in 1/200th scale and the bow from above.

The sixth plan shows 1/200th scale illustrations from above of the center section and stern sections of the Vincennes.

The reverse side of the sixth plan has illustations to 1/700th scale of a side profile, above view and interior bulkheads of the Vincennes. One corner of the sheet has specifications of the ship and the other corner has a listing of all the New Orleans Class Heavy Cruisers, when their keel was laid, when launched, when commisioned and their fate. 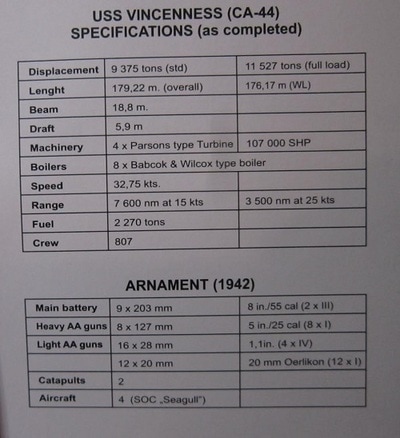 ​I only found one kit of it around, to 1/700th scale from Trumpeter and available at Sprue Bros.
This is a nice set of plans and should appeal to both modelers and naval historians alike.

All MMP titles can be seen on the Casemate site at: