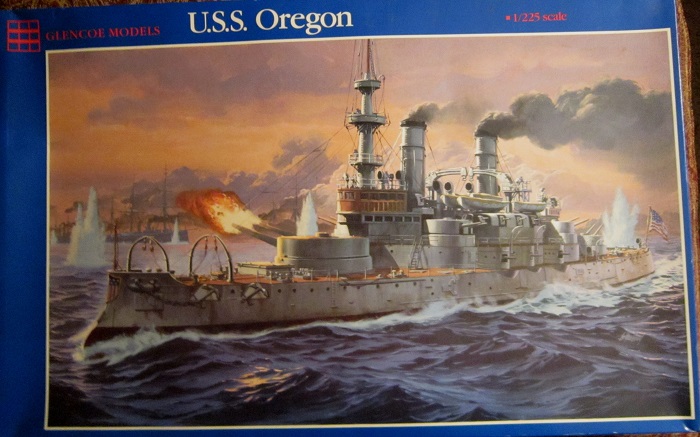 Launched in October of 1893, the battleship Oregon was the third of the “modern” Indiana Class battleships heralding the new firepower of the U.S Navy. The heavily armed ships carried two twin 13 inch  main turrets located fore and aft, four twin 8 inch wing turrets, four 152 mm guns amidships and six torpedo tubes, one each in the bow and stern and two aimed from each side. Small armament included 20 six-pounders, 6 one-pounders and four Gatling guns.

Unfortunately, the new ships had too little freeboard, were too heavy and had limited endurance for effective ocean work. One of the main problems was caused by the Navy, who insisted on using the old “Pillbox” cylindrical turrets. This requirement forced the designers to place heavy guns near the edge of the turret to reduce the size of the gun ports needed for elevation. This placed the center of balance too far forward and caused the ships to list sharply toward the opposite side when the guns were fired in broadside.

It was also found that the big guns could not be fired within ten degrees of the center line without deafening the aiming crew. In fact, the real value of these ships was as coastal defense vessels, and as such a role they were indeed formidable weapons.

Despite their problems, the Oregon, Indiana and Massachusetts did serve with distinction during the Spanish-American War of 1898. At the outbreak of the war, the Oregon was in the Pacific and was ordered to the Caribbean Sea to join the fleet blockading Cuba.

After a historical record-breaking run of 14,000 miles around Cape Horn, the Oregon was in action with the rest of the fleet within a month of the beginning of the war. During the Battle of Santiago Bay, she participated in the destruction of the Spanish fleet.

In her heyday, the Oregon could be urged to a speed of 16.78 knots. Her main battery could pierce 35 inch thick steel plating at 1,500 feet.

In 1911, the three ships were upgraded and wooden masts were replaced with the distinctive cage masts typical of the era. By World War I, however, the 3 ships were obsolete and were stricken from the rolls after the Armistice in 1918. In 1920, the Indiana and Massachusetts were sunk as targets, and only the Oregon took up a collection from citizens and purchased the historic ship as a memorial.

In 1942, President Roosevelt ordered the Oregon back into service and it was converted into an ammunition-storage depot ship. It was towed to Guam, where it spent the duration of WWII.

In March 1946, under the ignominious title of Hulk IX-22, and despite the pleas of the citizens of the state of Oregon, the historic U.S.S. Oregon was reduced to scrap.

The Oregon, as well as the Indiana and Massachusetts, normally displaced 10,288 tons. It was 351 feet long overall, with a beam of 69 feet 3 inches. Draft was 24 feet. The steam engine provided 9,000 hp through two shafts and gave a normal speed of 15.5 knots.

Armor plating at the belt line was 18 inches. The turrets were 15 inches thick and the superstructure was 17 inches thick. The normal crew compliment was 473.

Glencoe Models is a prolific model company based in Northboro, MA U.S.A. They are a  prolific marketer of all manner of model subjects in various scales.

The box art shows the Oregon in action in the Battle of Santiago Bay during the Spanish-American War.

One side panel has a small color repeat of the box art followed by a short history of the Oregon.

The other side panel has color box arts of two other ship models that Glencoe markets: a U.S. Coat Guard Rescue Boat and a WWI U.S. Subchaser. No kit numbers are shown for either of these.

The overseas agent is given as International Hobbycraft Ltd. In the Uk with their street address in Bristol there. This is followed by a LIMIT OF LIABILITY statement and the copyright date of 1989.

Glencoe has a web site but the amount of kits shown on it have really been watered down over the years. A lot of the ones in this old catalog have been dropped.

The instructions consist of three 9” x 12” loose sheets printed on both sides to form 6 pages.

Page 1 has a black and white repeat of the box art, followed by a long history of the Oregon (repeated above) and a paint color listing with no hobby paint manufacturers mentioned.

Art work for this kit was done by Jack Leynnwood.

Page 2 has the parts trees illustrations and three side profiles of the Oregon calling out her colors before the Spanish-American War, during that war and after. Below these there are international assembly symbol explanations and Glencoe’s P.O. Box address and the copyright date of 1989 repeated again.

Pages 3 through 6 give a grand total of 8 assembly steps.

Trees are not alphabetized and the parts tree illustrations do not show illustrations of the white  hull halves and white part trees. 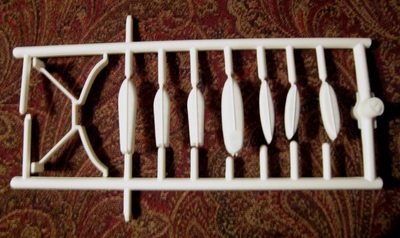 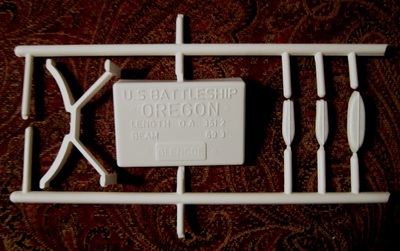 The large 2 grey trees hold all the rest of the parts, except for the single grey central deck section. 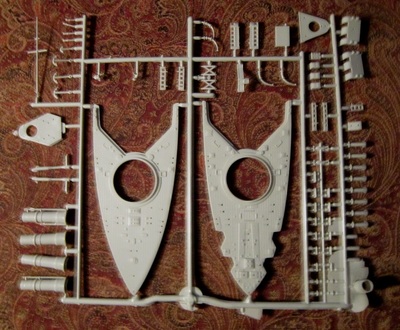 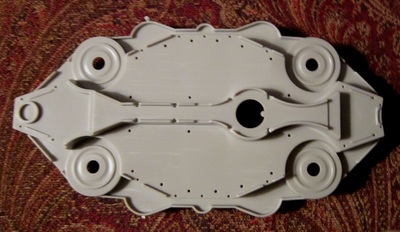 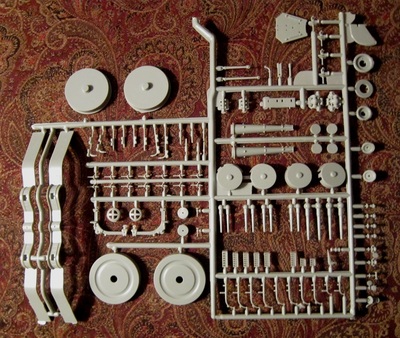 The decal sheet has markings for the Oregon, Indiana and Massachusetts. Also included is a sheet of signal flags. 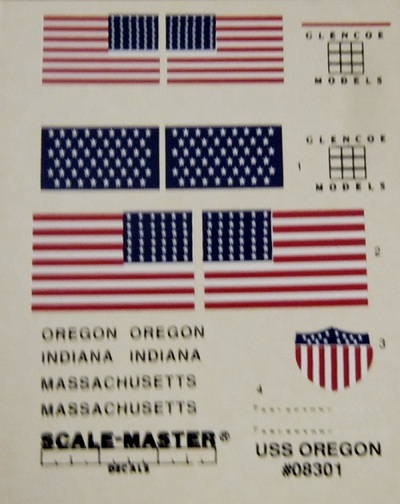 This kit first appeared under the ITC (Ideal Toy Corp.) label back in the 50’s. Thinking back to then, I believe I once built it in my teens.

It is state of the art for 50+ years ago and by today’s standards seems a bit clunky in areas.

There is an aftermarket set of turned gun barrels for all the turrets by a company named B & D Barrels for a whopping 50 bucks and a fret of PE parts by Tom’s Modelworks brand for $35.00.

However, fifty years ago this kit was much sought after. The basic price of it today is such that sinking another 85 bucks into it for more details might not seem so bad.

Recommended to modelers of average skills. Kit was courtesy of my wallet back in the early 90’s.