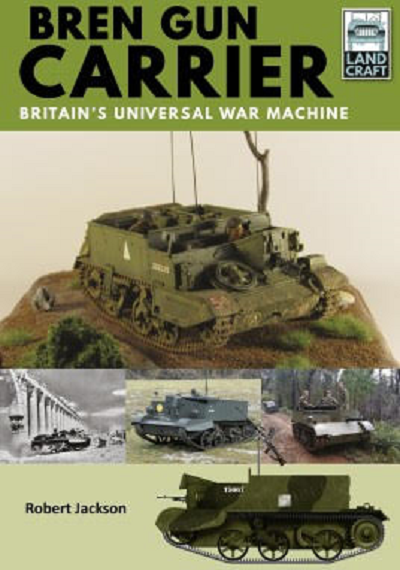 One of the most versatile fighting vehicles in the British Army and many other forces for a quarter of a century, the Universal Carrier – more popularly known by its original title of Bren Gun Carrier – was developed as a fast and agile infantry-support vehicle.

The Bren Carrier served in every theater of WWII, from northwest Europe, North Africa and the Soviet Union to the Far East. Then, with the war over it was operated by many belligerents in a string of other conflicts around the world, including Israel’s struggle for independence and the war in Korea.

The cover art shows at the top a color photo of a Riich Model brand 1/35th scale Bren Gun Carrier with a 2.8cm sPzB-41 anti-tank rifle by Bronco Models brand mounted atop it, with 12 color walk-around photos of it made up.

On the left, below that, there is a black and white photo of a Bren Carrier manned by Free French soldiers in action during the campaign in Syria in June 1941. It is shown passing under a columned aqueduct.

On the right is a color photo of a Bren Carrier moving through a woods.

At the bottom of the cover art there is a color side profile of a Universal Carrier Mk.1 depicting two headlights, HE multiple box storage arrangement at the rear and block shaped wood or rubber guards. The counter camouflage scheme was applied during the Mk.1’s service. It is in a splinter-pattern of 2 shades of tan, green and black. This Carrier is in in the profile section of the book as a 4-view.

Down the right column of the back cover shows a color photo at the top of a Australian-built Universal LP2A Carrier sitting on a grassy field. It is in a splinter of tan and dark green.

The 2nd photo below it is a color photo of the IBG brand 1/72nd scale Universal Carrier No.2 Mk.II made built up.

The 3d photo below is a color photo of a Canadian Universal Carrier pictured during a WWII reenactment show in 2006.

The left hand column has the history of the Bren Carrier.

At the bottom of the page there is a color profile of the Carrier Universal T-16 Mark 1 that was a significantly improved vehicle based upon those built by Ford of Canada, manufactured under Lend Lease by Ford in the U.S. from March 1943 to 1845.

In this volume in Pen & Sword Land Craft series, Robert Jackson traces its design and manufacturing history and describes its operational role throughout its long career.

A selection of 164 combined black and white illustrations are in the book.

There are eight 4-view profiles included.

Included, there are 4 build reviews in the book of the Universal Carrier.

The first one is of the 1/72nd scale IBG brand Carrier Mk.II by Timothy Neate, with 17 color walk-around type photos of the model made up.

The second one is the Tamiya 1/35th scale Bronco brand Carrier, pulling the Riich’s brand 6 pdr. Anti-tank gun by Michael Roof in a diorama, with 10 color walk-around type photos.

The third one is also the Tamiya 1/35th brand Carrier, with the Bronco brand 2.8cm sPzB-41 anti-tank rifle mounted atop it, by Morgan Violet-Harris, with 12 color walk-around type photos of it made up.

The fourth one is  the Resicast Multimedia brand in 1/35th scale of the T-16 Carrier by Patrick Bernier, with 12 color photos of it made up.

There are 6 color walk-around photos of the Accurate Armor brand Carrier kit made up, but no modeler’s name mentioned.

There are 2 color photos of the Airfix brand 1/76th scale Carrier, with a 6 pdr. Anti-tank gun, showing its tracks and crew figures.

There are 4 color photos of the IBG brand Carrier Mk. 1 of the kits parts, 4 different box art for it and 7 color walk-around photos of the model made up.

There are 9 color photos of the 1/76th scale Minicraft brand Carrier Mk. 1 made up.

There are 5 color box art photos of the Resicast boxing's of the Carrier Mk. 1 in 1/35th scale and 7 walk-around type photos of the kit made up.

There are 8 color box arts photos of the Riich brand 1/35th scale kits of the Carrier Mk.I and Mk. II and 4 color photos of the models made up.

There are 2 color photos of the Tamiya brand Carrier Mk. II in 1/35th scale model made up

Robert Jackson is the author of over 80 books on military, aviation, naval and scientific subjects. He was defence and science correspondent for a major British newspaper publishing group. He has written five books in the Tank Craft series and has contributed to the Flight Aircraft series. This is his first book for the Land Craft series.

The last page of the book shows 15 black and white cover arts of other Pen & Sword AFV books and a listing of 20 more.

This is one neat book. It will be of great interest to modelers planning to build a Universal Carrier and to armor historians alike.

I want to thank Casemate Publishers, who are the North American distributor for Pen & Sword books. All Pen & Sword titles can be viewed on Casemate’s website at:
www.casematepublishers.com