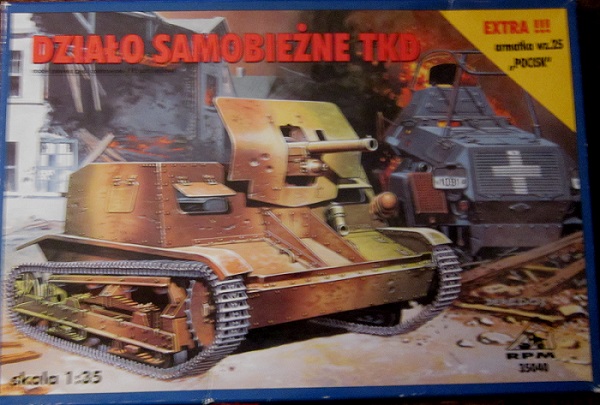 The TK(TK-2) and TKS were Polish tankettes used during WWII. The TK tankette was a Polish design, produced from 1931, that was based upon an improved chassis of the British Carden Loyd tankette. The TKS was an improved model with a new hull and more powerful engine. The armour of the TK was up to 8mm thick (10mm on the TKS). In 1939, re-arming of the tankettes with 20mm guns began, but only about 24 were completed before the outbreak of WWII.

The 575 TK/TKS tankettes formed the bulk of the Polish armoured forces before the outbreak of the war. They suffered heavy losses during the invasion of Poland by the Germans, often being the only armoured fighting vehicle available.

Due to their light armament of a single machine-gun, they stood no chance in combat against German tanks, except for the Panzer I (also based on the Carden Loyd tankette). Their small size suited them for reconnaissance and infantry support. Only a handful of tankettes armed with 20mm guns had a fighting chance against the enemy tanks.

The TKD (subject of this kit) was only a prototype, armed with a 47mm gun. Only 4 were ever produced.

RPM is a model firm based in Warsaw, Poland. They make quite a number of 1/35th scale kits.

This kit  is in a shrink-wrapped tray and lid type box. The box art shows a TKD on a city street with a knocked out German armored car behind it that is sitting in a pile of rubble.

A side panel of the box has the box arts of 4 other models in the RPM line. A Soviet T-60, a German Kubelwagen in DAK marks, a French FT-17 and a Polish Ford Tc armored car. I have this last mentioned kit built in my display case. Next to these box arts is an illustration of the decal sheet in the box.. Luckily I knew what each of these AFV’s was and could identify them, because the color illustrations just show the box arts with no mention of what the vehicles are.

The box art also says that there is a 47mm cannon on it’s wheeled carraige included in the kit. So, this is a 2-in-one kit.

The other side panel has a small color repeat of the box art, followed by the statement that the kit is suitable for age 8 to adult, that it contains details and instructions for assembly and there is no paint or glue included. This is said in German, Polish and English marked with color illustrations of the flags of the countries that speak those languages.

Inside the box are 4 very pale gray trees of parts, 3 chalk white trees and a fret of brass PE in 3 sealed cello bags. The decal sheet and instructions complete the contents of the kit.

Page 1 begins with a black and white repeat of the box art. This is followed by a one paragraph history of the vehicle in Polish and  illustrations of the decal sheet, a 47mm cannon on it’s wheeled carraige and a side view of a TKD in a two tone camouflage called out in what I believe are Humbrol brand “H” paint numbers, but not what those colors are.. Unfortunately, all the text is in Polish only., so I don’t have a clue what else is said here. The TKS only has one marking on it. It is a white square with a smaller red square in it’s center. The bottom of the page has illustrations of 3 of the 7 parts trees and RPM’s address in Warsaw. Some of the parts on the largest tree are shaded out, indicating that they are excess and not needed to complete the model.

Page 2 begins with illustrations of the other 4 parts trees and the PE fret. This is followed by the first 6 assembly steps.

Pages 3 and 4 give a balance of 19 total assembly steps. Two of these steps are for the assembly of the wheeled 47mm. The rest are for just the TKD.

This kit has a pretty complete interior, with driver and commander seats, battery, transmission, steering wheel, levers etc. Darn nice..really. Being an open-topped vehicle, much of this will be visible when the kit is complete. Too bad it does not include any crew figures.

Only the parts tree drawings are numbered. The parts trees are not. This means you will have to constantly refer to the drawings to find parts on the actual trees. This makes for very tedious building of a model and really bad move by RPM.

The first large parts tree,which is pale grey, holds: the floor, sides, muffler, engine compartment roof, and nose roof parts etc all molded in the center section of the tree mostly for the TKD version, a few of these same parts in the center also would go on the TKS version, both sides of this tree have 2 different sets of parts for the TKS type: the fighting compartment roofs and nose panels, machine gun ball mount, split hatch doors and nose top panels (32 parts) Thirteen parts of one version are for the TKS and 7 are for the other TKS version. A whopping 16 of these are excess and are nor needed to complete the TDK. 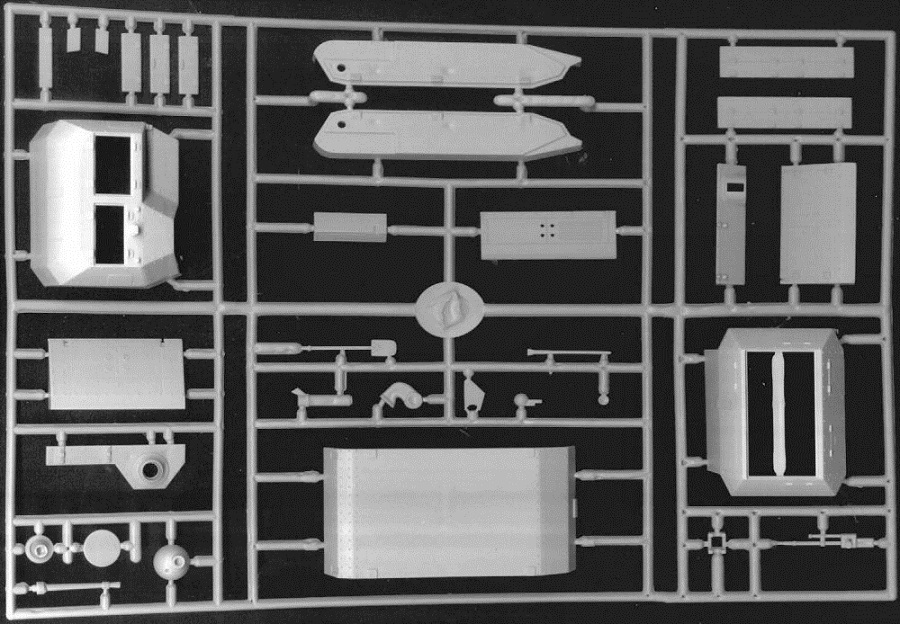 There are 2 pale grey medium sized, identical trees of parts. These hold: the road wheels, drive sprockets, return rollers, idler wheels, leaf springs, boggies and their supports and link and length type tracks etc. (45 parts per tree) Two parts on each tree are shaded out as excess in the parts illustrations. 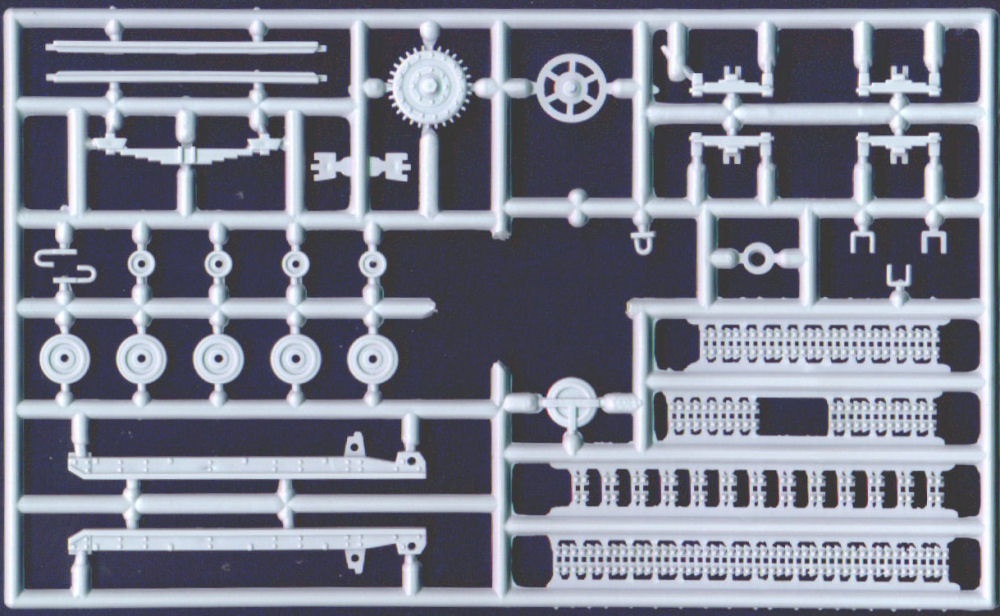 The next chalk white  medium sized tree holds: the side panels for the TKD’s open-topped fighting compartment and vision flaps etc. (18 parts) Three of these parts are excess. 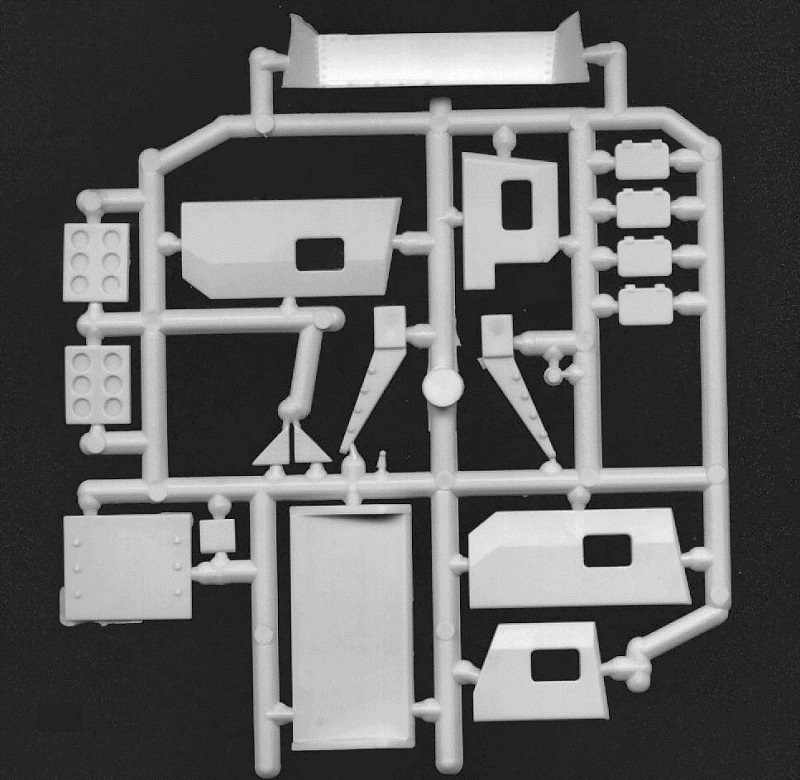 The next pale grey medium sized  tree of parts holds: the steering wheel, transmission, battery, seats and other internal details (43 parts) Twenty-four of these parts are excess. 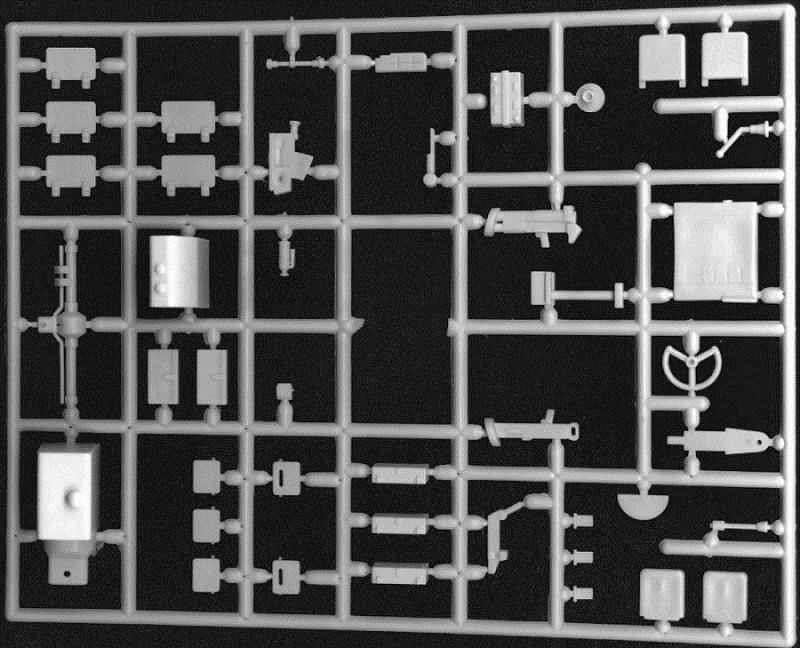 There are two identical chalk white small sized parts trees that hold parts for a wheeled 47mm. One of the trees is to be partially used for the 47mm that goes on the TKD. The other tree is completely used to do a 47mm on it’s wheeled and trailed carriage. (57 parts per tree) Now, although not shaded out on the parts tree drawing, naturally some of the parts on one tree will become excess as you will only be using the gun and it’s shield. Not the carraige and trail pieces. 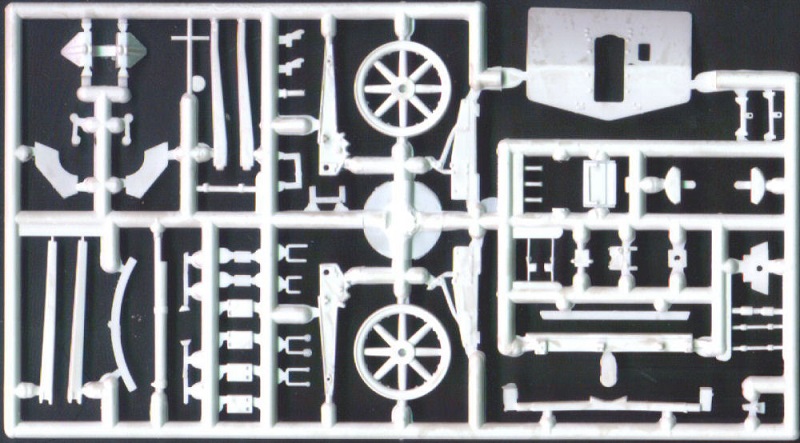 The brass PE fret is next. I found it impossible to give names to all the parts on this fret, other than an ammo rack and an air intake screen. You will have to look for yourself at the picture of it. Sorry. 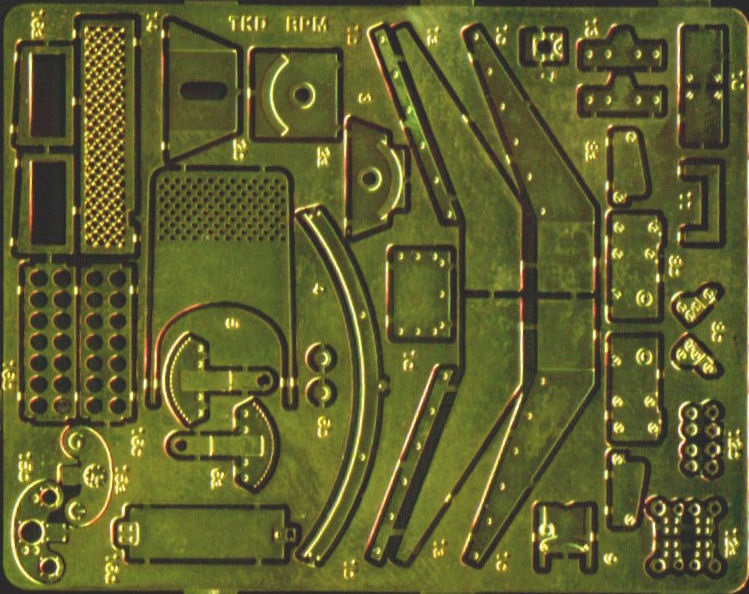 The decal sheet has several different insignia on it, however – only the white square with red square in the center is shown for a single marking scheme on the instructions. I assume this sheet is common to RPM’s other kits of the TKD series of tankettes, like the body parts on one of the trees that are obviously for other variants than the TKD. The instructions state that the markings were used for maneuvers ONLY and not in combat. 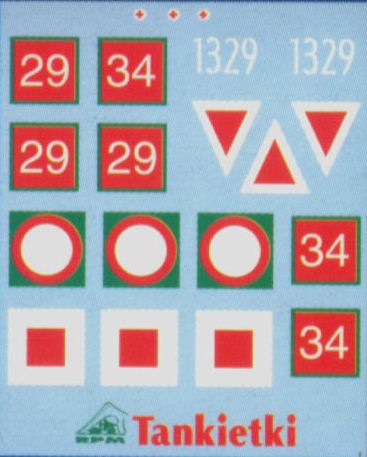 Care will have to be taken when removing parts from the trees, as the pour points are quite large compared to the parts and damage may occur.

Except for the lack of part numbers on the trees, I recommend this kit.

I purchased this kit at my local hobby shop years ago.