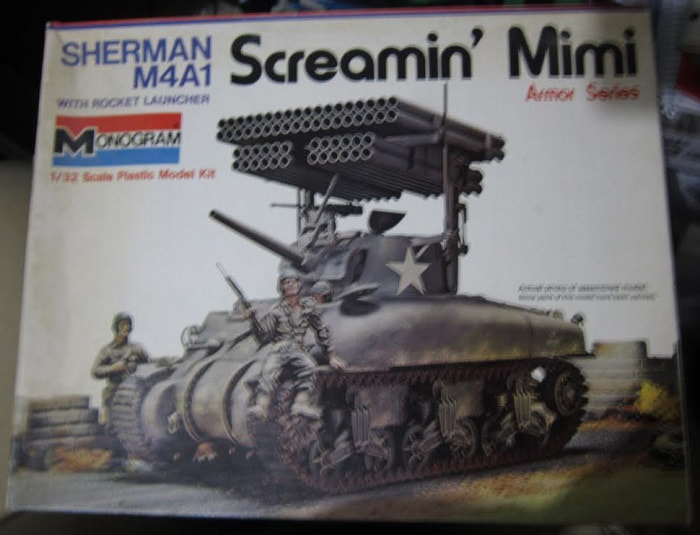 The Sherman family of armored vehicles was the mainstay of the Allied armored forces in WWII. Shermans saw extensive service in every theater of the war.

This is really a remarkable record when one recalls the ressures under which the vehicle was designed. The United States had entered the war without a satisfactory medium tank and the M3 Lee had been thrown together as a stop-gap measure. The Ordinance Department was hard at work on a successor even before the Lee went into production.

With only two inches of armor on the front of the hull and one and a half inches on the sides, the Sherman was not very well armored. This was a flaw that troubled its crews throughout its existence. To make up for this deficiency, the men supplemented the armor with whatever happened to be available - sand bags, steel plate, logs, timber, spare track sections, concrete - and held it in place by whatever means they could devise. This was effective, but frequently made the tank look like a rolling junk-pile.

In active service, particularly as the war progressed, the tank revealed other flaws, some of which could be corrected, others of which could not. The ammunition and engines were very prone to catch fire when hit, often burning out of control or exploding before the crew could escape.
The main armament, adequate in the beginning, later proved to be hopelessly outclassed by the powerful long-range guns of the German Tigers and Panthers. It soon became axiomatic among allied tankers to expect to lose three Shermans for every Tiger or Panther destroyed.
They could afford such losses. The Sherman was designed for mass production, and the production statistics are impressive Nearly 50,000 had rolled off the production lines by the end of the war.

The real strength of the Shermans lay in their mobility, ruggedness and mechanical reliability. Road marches of a hundred miles a day were not unheard of, and when they did break down they were easy to repair.

There were numerous models of the Sherman produced, differing primarily in the form of the type of engine employed. Although common practice called for on model number to succeed another, the various Sherman models were all in production until the end of the war. The different types of power-plants were masterpieces of improvisation. Two, the M4 and M4A1 were actually powered by radial aircraft engines, while another used five automobile engines hooked pp to a central shaft.

The T34 "Calliope" rocket launcher was born from a desire to give the armored forces a source of massive artillery support, particularly when working with infantry. Ground mounted rocket launchers of this type had long been used by the Germans and Russians. Their hideous shriek as they descended on the target caused the GI's to nickname them the "Screamin' Mimi", and few weapons in the German inventory were as dreaded as this one.

The M4A1 was the first Sherman to see active service, and differed from the other models in having a cast hull, a compled bit of engineering that only America industry was equipped to do. By the end of the war 9,677 had been produced.

The apparatus was designed so that the rockets could be armed and fired from inside the turret; they were launched in staggered sequence, either in small groups or all at once in rapid succession. Since a clumsy apparatus like this could proive a severe handicap in a free-wheeling tank battle, the entire rig - frame, tubes and all - was designed so that it could be jettisoned at a moment's notice simply by flicking a swich inside the turret.

"Calliope" equipped Shermans were first used in combat by the 2nd Armored Division in August 1944, and saw limited service with a number of other divisions before the war ended.
​THE KIT:

Monogram is a prolific model company based in Morton Grove, IL . At the time of this kit's release...1975...they were under the Mattel Toy Co.

The box art shows a Screamin' Mimi parked near some damaged walls. It is overall olive-drab with a large white star on the sides of the turret and a white serial no. USA over 3022851. A crewman is looking out of the driver's hull hatch. Another crewman is sitting on the fender holding a rifle and the third crewman is standing behind the tank at front. All of them wear leather tanker's helmets.

One side panel of the box has two color photos of the model made up as the rocket launcher in a diorama by Sheperd Paine. It shows the tank parked under a tree in the snow.
​The other side panel has some features listed about the kit, followed by a color photo of the side of the tank in the version without the launcher. It is overall olive-drab with a large white star on the sides of the turret and a serial no. USA over 301821.

Monogram's street address in Morton Grove, IL is provided and the copyright date of the kit is 1975. Kit was made and printed in the USA. Monogram was under the Mattel Toy Co. at the time and their logo is shown.

Also included is a catalog for Monogram's Armor Series of U.S.  vehicles. 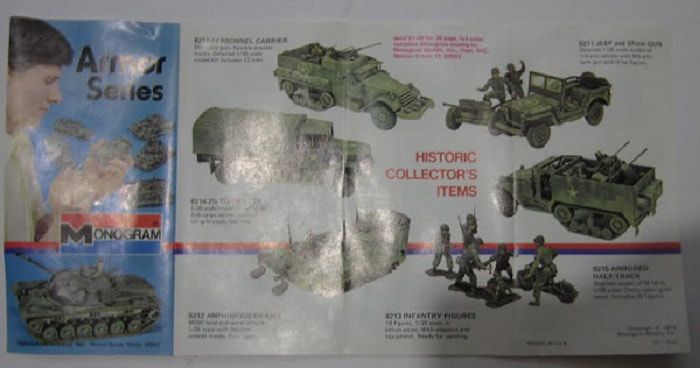 A sheet with profiles of tank models made by monogram is in the kit. 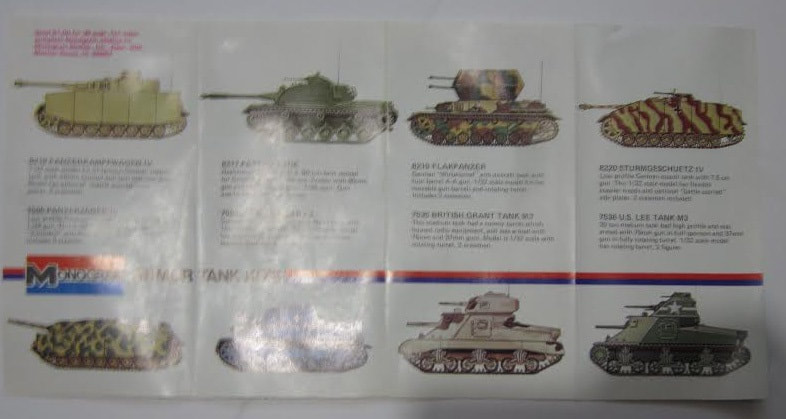 The kit contains 5 olive-drab trees of parts, a olive-drab hull tub and a loose crew figure, two loops of grey vinyl treads, the decal sheet, instructions and a small color catalog of other AFV kits that Monogram produced.

Page 1 of the instructions begins with a black and white repeat of the box art, above the history of the M4A1 sherman and READ THIS BEFORE YOU BEGIN ASSEMBLY instructions. The bottom of the page has Monogram's stree address in Morton Grove, IL provided, copyright of the kit is 1975 and kit was made in the USA.

Page 2 to the top of page 6 gives a grand total of 21 assembly steps.

A second sheet is printed in full color on slick coated paper. It is the same page format size on a single sheet folded in the center to create 4 pages.

It shows Shep Paines winter diorama with the Screamin' Mimi. There are 7 color walk-around type photos of his diorama and 6 black and white photos of various parts of the tank. He tells step by step how he built the diorama. 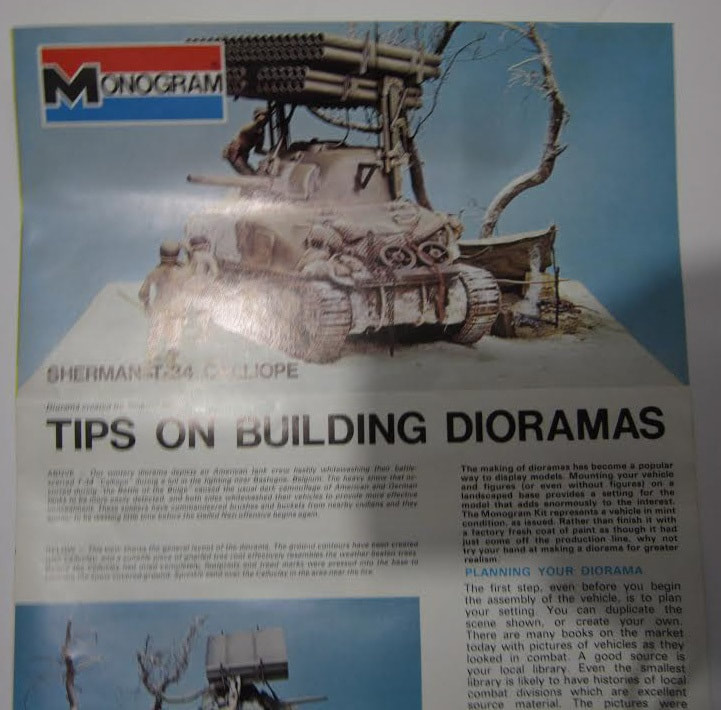 ​Part trees are not alphabetized or illustrated in the instructions. They do however have part number tabs on them next to the parts. Trees are not cello bagged. 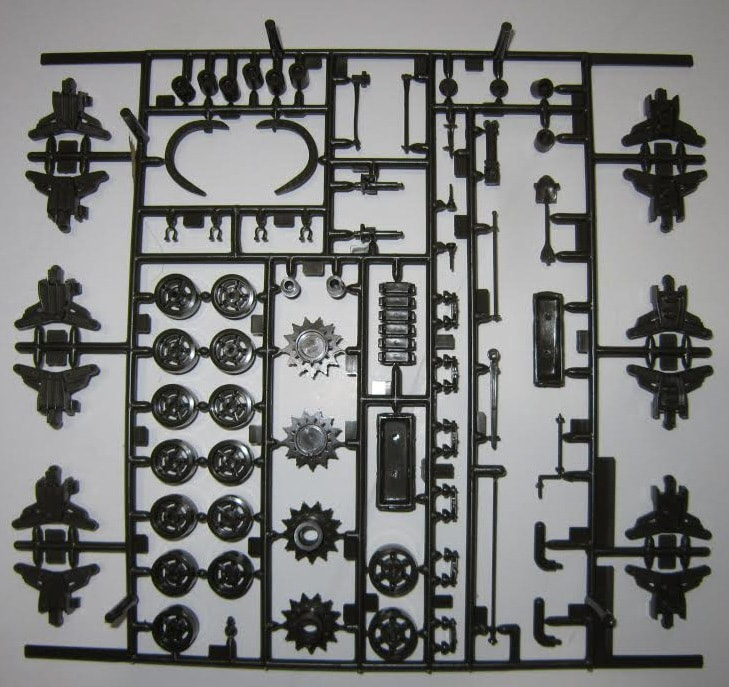 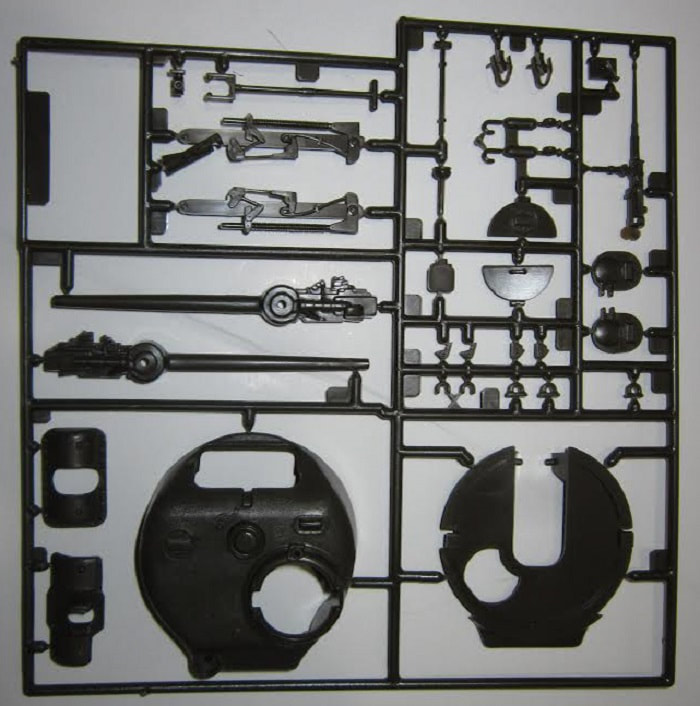 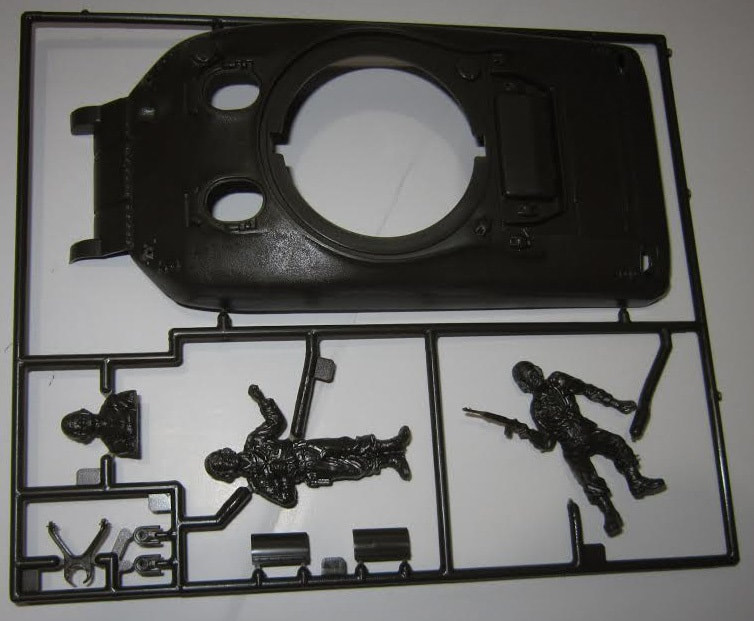 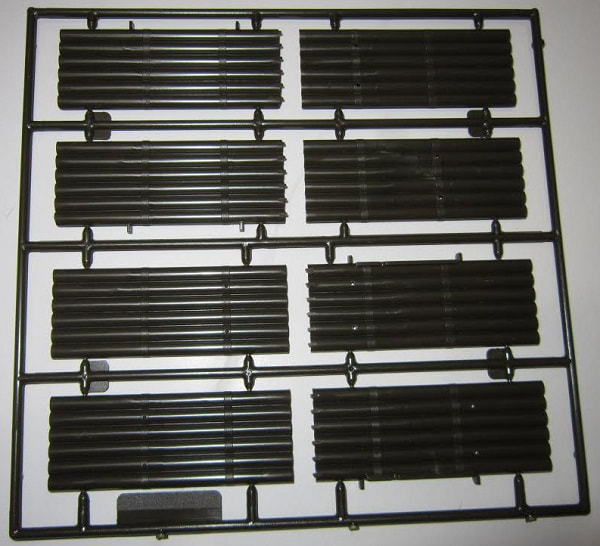 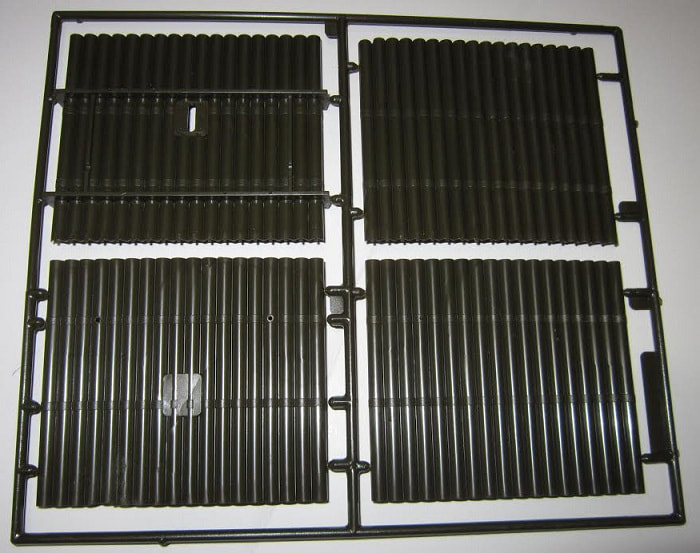 ​The loose olive-drab hull tub and the figure holding the rifle are next. 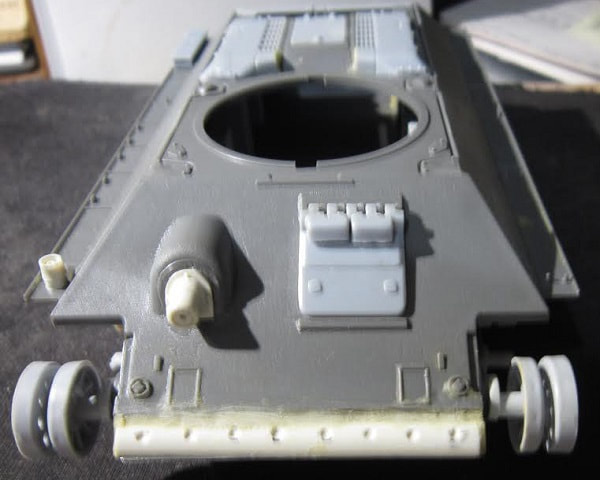 ​The two loops of grey vinyl treads and the decal sheet complete the kits contents. 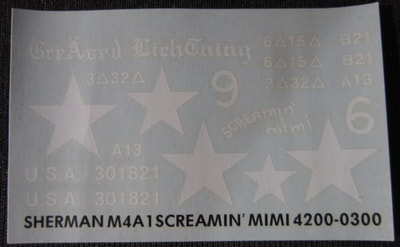 There are no clear part in the kit nor any interior detail other than the main gun breech. Hatches can be posed open or shut but there is nothing to see inside. The driver figure can plug one hatch opening anyways.

This is a nice kit externally. It is not that much scale difference from the normal 1/35th scale, being as it is 1/32nd which used to be the norm for some Monogram and Airfix kits.

It can still be found here and there in the internet as well as stores.