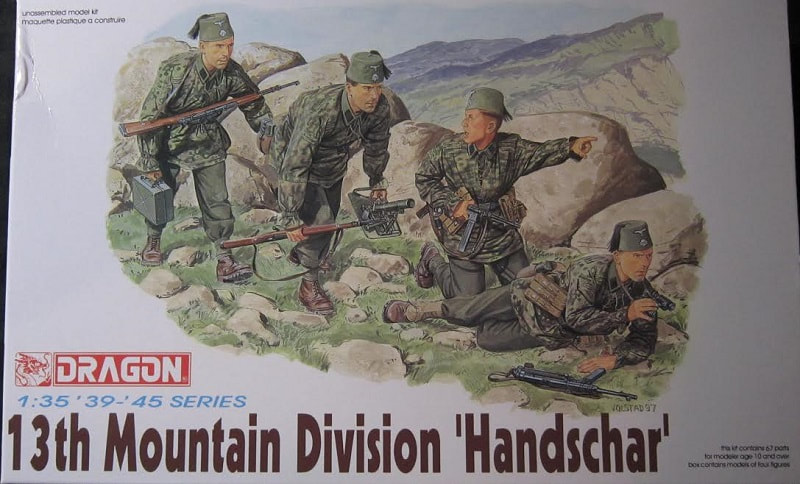 MSRP: $8.50
​DML Dragon is a prolific model company based in the U.K. They make all manner of model subjects in the popular scales.
​
HISTORY:

The 13th Waffen Mountain Division of the SS Handschar (1st Croatian) was a mountain infantry division of the Waffen-SS, an armed branch of the German Nazi Party that served alongside but was never formally part of the Wehrmacht during World War II.

From March to December 1944, it fought a counter-insurgency campaign against communist-led Yugoslav Partisan resistance forces in the Independent State of Croatia, a fascist puppet state of Nazi Germany that encompassed almost all of modern-day Croatia, all of modern-day Bosnia and Herzegovina as well as parts of Serbia.

It was given the title Handschar after a local fighting knife or sword carried by Turkish policemen during the centuries that the region was part of the Ottoman Empire.

It was the first non-Germanic Waffen-SS division, and its formation marked the expansion of the Waffen-SS into a multi-ethnic military force. Composed of Bosnian Muslims (ethnic Bosniaks) with some Catholic Croat soldiers and mostly German and Yugoslav Volksdeutsche (ethnic German) officers and non-commissioned officers, it took an oath of allegiance to both Adolf Hitler and the Croatian leader Ante Pavelić.

It also fought outside the security zone on several occasions, and earned a reputation for brutality and savagery, not only during combat operations, but also through atrocities committed against Serb and Jewish civilians.

In late 1944, parts of the division were transferred briefly to the Zagreb area, after which the non-German members began to desert in large numbers. Over the winter of 1944–45, it was sent to the Baranja region where it fought against the Red Army and Bulgarians throughout southern Hungary, falling back via a series of defensive lines until they were inside the Reich frontier.
Most of the remaining Bosnian Muslims left at this point and attempted to return to Bosnia. The rest retreated further west, hoping to surrender to the western Allies.

Most of the remaining members became prisoners of the British Army. Subsequently, 38 officers were extradited to Yugoslavia to face criminal charges, and 10 were executed.
Mortar as used by the Handschar. 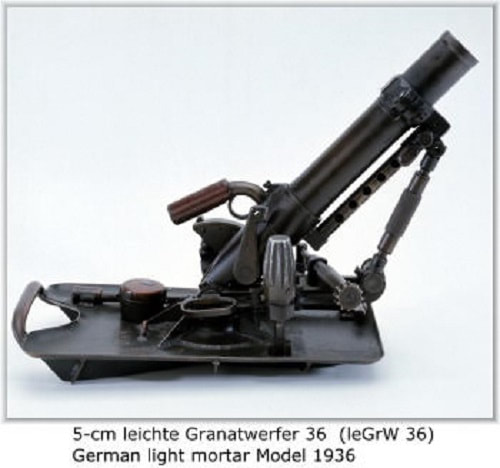 The box art shows 4 Handschar men in rocky terraign. They all wear camouflaged smocks, field grey trousers boused into "styrian gaiters" above low shoes and have field grey fex hats on their heads.

The first man is prone and looking through a pair of binoculars. He is armed with a MP40 submachine gun that is laying by his side. He has an ammo pouch for it on his belt along with a canteen.

The second man behind him is kneeling on both knees and pointing with his left arm while talking to the man behind him over his right shoulder. He too is armed with a MP40 and has the ammo case for it on his belt along with a canteen and a canvas bread sack.

The next man is crouched and running. He carries a small light mortar known as a 5-cm leiche granatwerfer 36 (LeGrW 36) model 1936. He is armed with a 98K carbine. He has a canteen, canvas bread bag and a bayonet in its scabbard on his belt.

The fourth and last man is in a crouch and carrying the ammo case for the mortar in his right hand. He is armed with a 98K carbine slung across his chest. He too has a canteen, canvas bread bag and bayonel in its scabbard on his belt.

One corner of the box art says the kit is intended for modelers over 10 years of age and that it contains 67 parts.

One side panel of the box has 2 color box arts of other figure kits that DML manufactures: kit no. 6058, German Panzerjagers (Eastern Front 1944) and kit no. 6061, German Feldgendarmerie (Field Policemen).

​The other side panel says the kit contains parts for 4 figures and that paint and glue are not included, in 6 languages including English.

This is followed by the copyright of the kit that is 1997, over DML's street address in Hong Kong, China and that the kit was made there.

The bottom of the box serves as both the assembly and painting instructions. There is a color 2-view of each of the four figures and 2 splotchs of camouflage patterns.

Below this is black and white line drawings of the mortar ammo case, the Styrian gaiters and a fez.

All the illustrations are by DML's resident artist Ron Volstad. 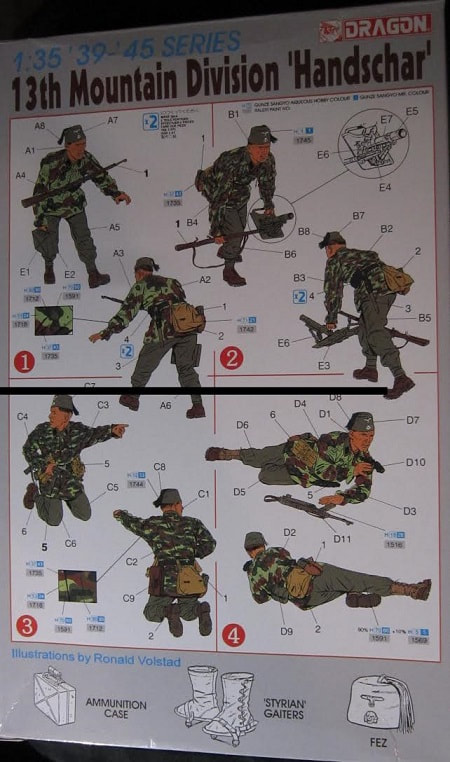 This kit contains one large light-grey tree and 2 small light-grey ones in 3 sealed cello bags. 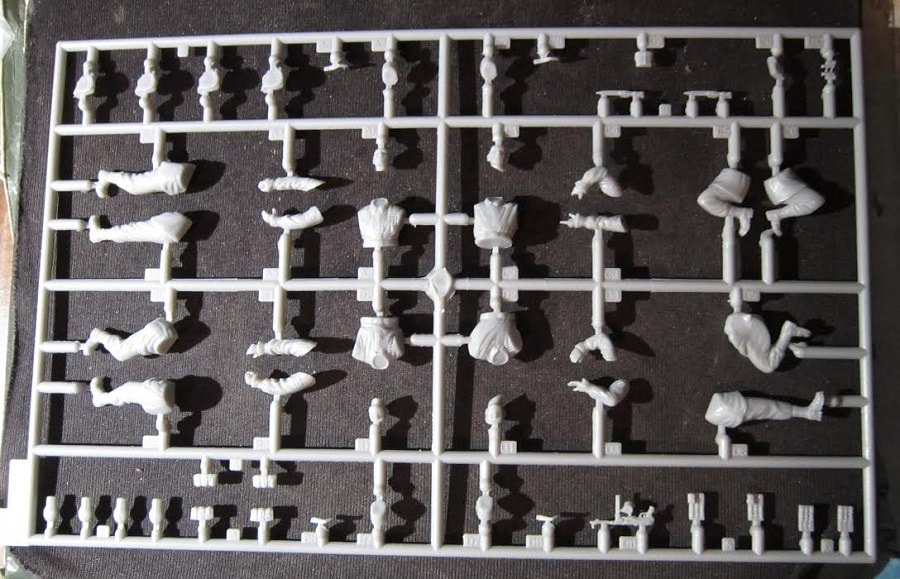 ​The first small light-grey tree holds: the parts of the mortar, its ammo case and rounds (10 parts)

​The second small light-grey tree holds: a MP40 submachine gun, a MP44 assault rifle, 2 98K carbines and magazines of ammo for the MP40 and MP44 (7 parts)

​This is a neat kit with figures in unusual uniforms and nicely done poses.

I bought my kit at my local hobby shop back in the late 90s.