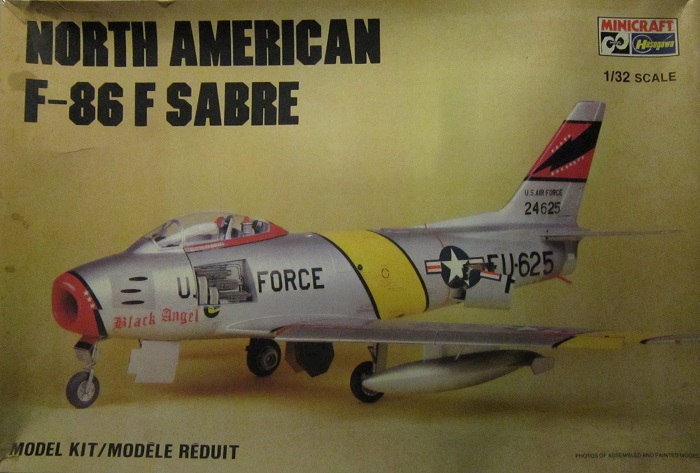 The outstanding success of the North American Sabre as a fighting machine is due to the wartime research of the German aircraft industry. Originally, the P-86 was to be a land-based version of the U.S. Navy’s FJ-1 Fury. The Fury was a stubby, straight-winged fighter with a top speed of 568 mph, but it was apparent, even on paper, that the FJ-1’s blunt shape could not be pushed to the maximum speed of 582 mph required by the Air Force. Faced with the cancellation of the P-86 project, North American’s engineers examined the possibility of using swept-back wings similar to the Me-262, to increase speed and reduce drag and compressibility. In the new configuration the P-86 had an estimated top speed which was 70 mph faster than the FJ-1.

On October 1, 1947, the XP-86, powered by a 3,750 lb thrust engine, made its maiden flight. The new fighter fulfilled the needs of the Air Force and its flashing performance led to an immediate production order. By June 1948, the designation had been changed to F-86 and the name Sabre, inspired by the swept-wings, was officially adopted. On September 15, 1948 the third production F-86A-1, pushed by a more powerful engine, set a new worlds speed record of 670.89 mph.

On the morning of June 25, 1950, North Korean forces invaded South Korea and the world was plunged into war again. On November 1st, swept-winged, Russian-built Mig-15 fighters began attacking South Korean P-51 Mustangs and USAF F-80 jets. The communist forces from the north were making a bid for air supremacy, a necessity for victory. Within a month, America responded when the first wing of F-86 Sabres arrived and began operations. From this point on the Sabres took the upper hand and began sweeping the Migs from the sky. The Mig pilots soon learned to respect their new foe and, as their own loses mounted, began to run from the Sabres. As they became more familiar with the performance of their mounts, Sabre pilots began to decimate their opponents and the Sabre became the mount of the Aces. Aces of WWII became aces in Korea in the Sabre. By the conclusion of the Korean War in July, 1963, Sabres had literally run the Mig-15’s out of the sky with a kill/loss ratio of 4 to 1. This sweeping victory placed the Sabre in that elusive class reserved for only the greatest and the F-86 became a classic.

Following the Korean War, improved Sabres rolled from the production lines. License-built Sabres were made in Canada and sold to many of the nations of the free world. German and British Sabres guarded the skies over Europe while in Asia, Nationalist China and Japan built their strength around the F-86. By 1968, the F-86 was the most widely used jet fighter in the world.

The performance of the Sabre was so superior to the original Navy FJ-1 that it was only natural that a Navy version be built. Modified to fit carrier standards with arresting gear and folding wings, the “navalized” Sabre was dubbed FJ-2 Fury and began replacing the tubby little FJ-1.

The F-86F Sabre was built in greater quantities than any other version, 2,540 of this type being built in the United States alone. Another 300 F-86F’s were built by Mitsubishi in Japan. On December 28, 1956 the last Sabre, an F-86F was delivered and the production life came to an end. At the end of its production life, this great aerial weapon had been delivered to perform several special services. From an interceptor, the Sabre had been modified to serve in ground-attack, bombing, photo-reconnaissance and all-weather fighter roles. Still on active duty for a long time, some F-86’s carried sidewinder AIM missiles and sophisticated radar.

This kit came in a very large (19 ¼” x 13”) shrink-wrapped tray and lid box. The box lid is kind of flimsy cardboard. At least mine is very crushed from being under a few other kits in my basement.  However, the tray is sturdy cardboard. I cannot help but think if Hasegawa had made the parts trees smaller they could have gotten away with a much smaller box. Tree letter A is the biggest tree in the box and there is a 2” void at one end of the box to the edge of this tree.

The box art shows this F-86F  model made up in the ONLY scheme provided on the kits decal sheet. It is overall bare metal. It has a red air intake lip outlined with a black lightning bolt and has 3 white stars on the red. The nose has the name Black Angel on it in black old English lettering followed by large black U.S. AIR FORCE. A diagonal yellow fuselage band outlined in back is behind the cockpit, followed by the red, white and blue U.S. star insignia with the bars  with a large serial no,. FU-625 behind the star. The tail has a wide red band around it outlined in black with a black lightning bolt and 13 white stars on it. Below this is U.S. AIR FORCE in small black letter and the serial no 24625 in black. The wing tips also have wide yellow bands outlined in black. The machine gun compartment door is off this model showing the interior and the dive breaks doors are deployed on the sides of the fuselage.

One side panel of the box has 4 color walk-around type photos of the model made up. It says here “Manufactured in U.S.A. under license from Hasegawa Model Co, Yaizu, Japan and Minicraft Models Inc., Torrance, California 90501, MADE IN U.S.A, PRINTED IN U.S.A and CANADA Hobby Industries, 24 Ronson Drive, Rexdale, Ontario.

The other side panel has kit specifications:

This is followed by a small color repeat of the box art and the history of the F-86 in English.

This kit contains 6 light gray parts trees that are loose and not cello bagged, a tree of clear parts and a length of black wire in a sealed cello bag, the decal sheet and the instructions. 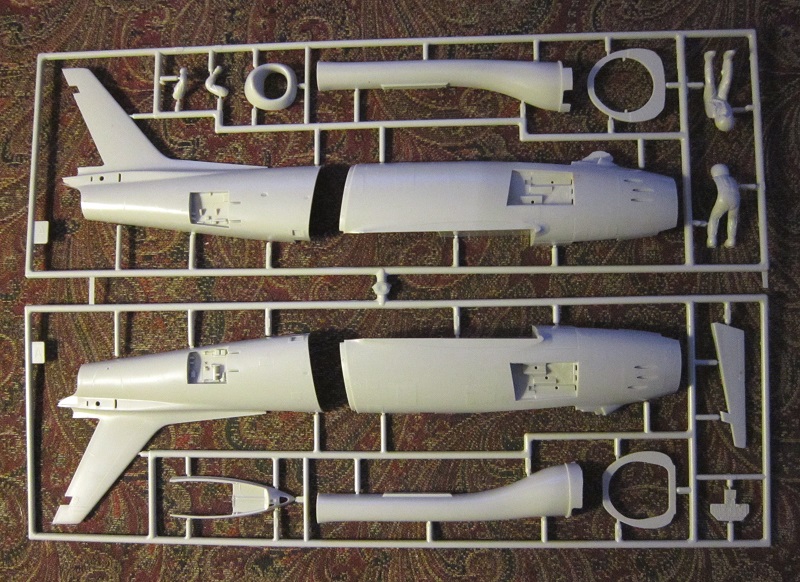 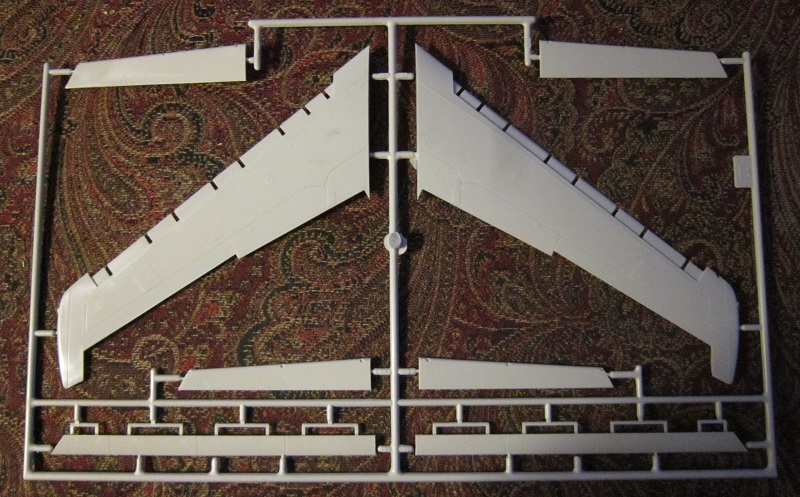 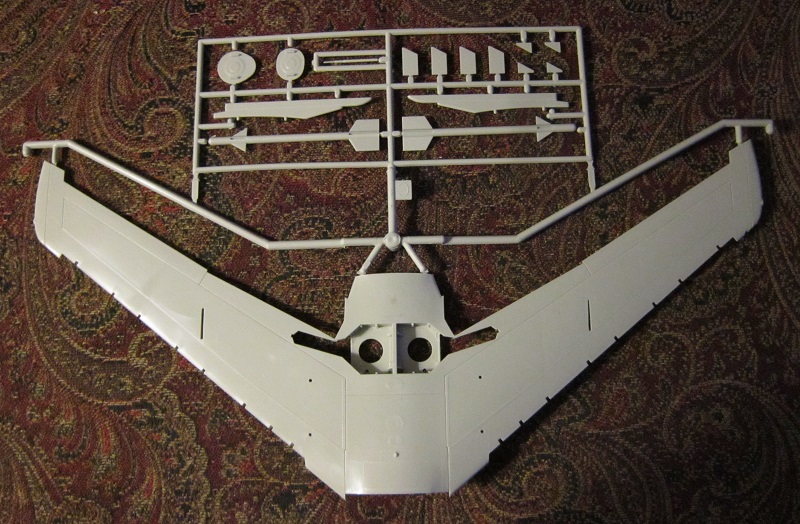 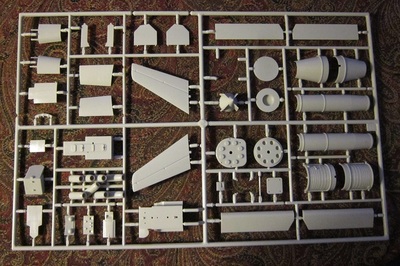 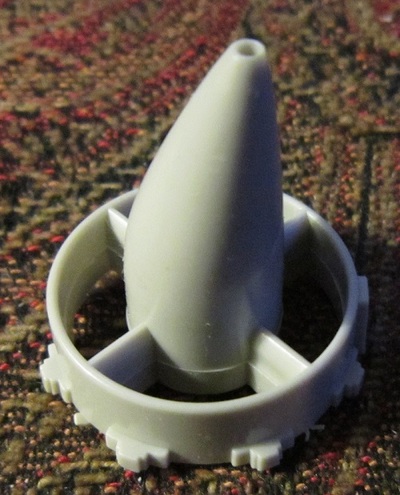 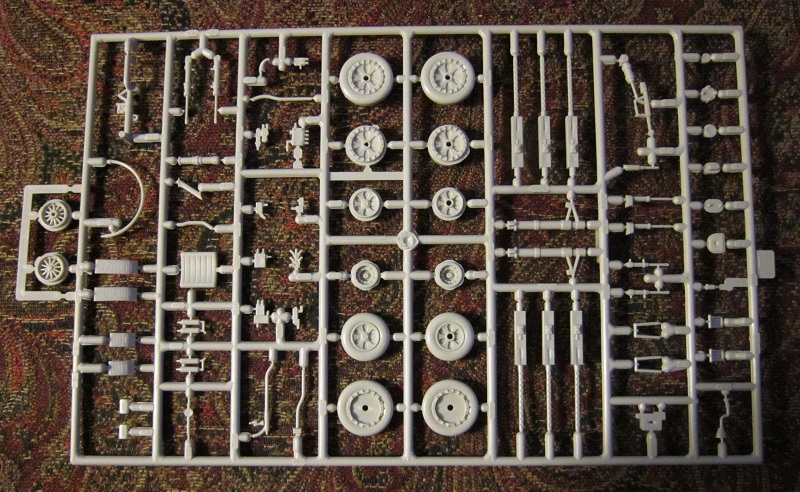 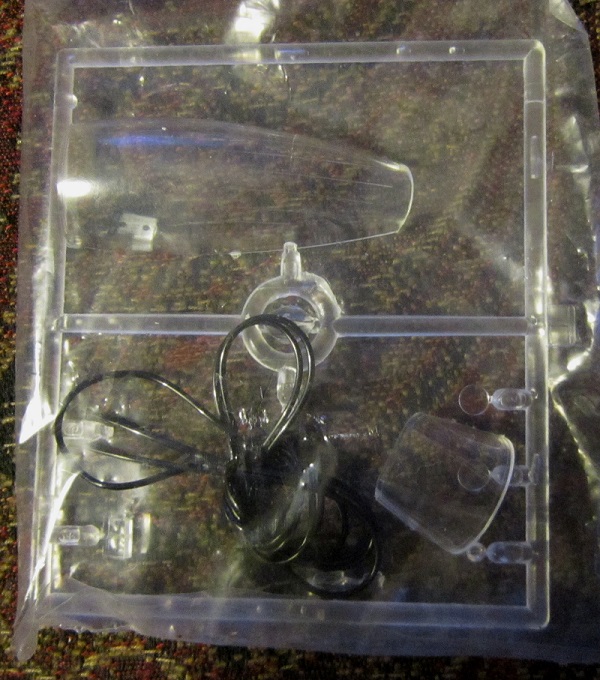 The decal sheet is next. It and the instructions complete the kits contents. 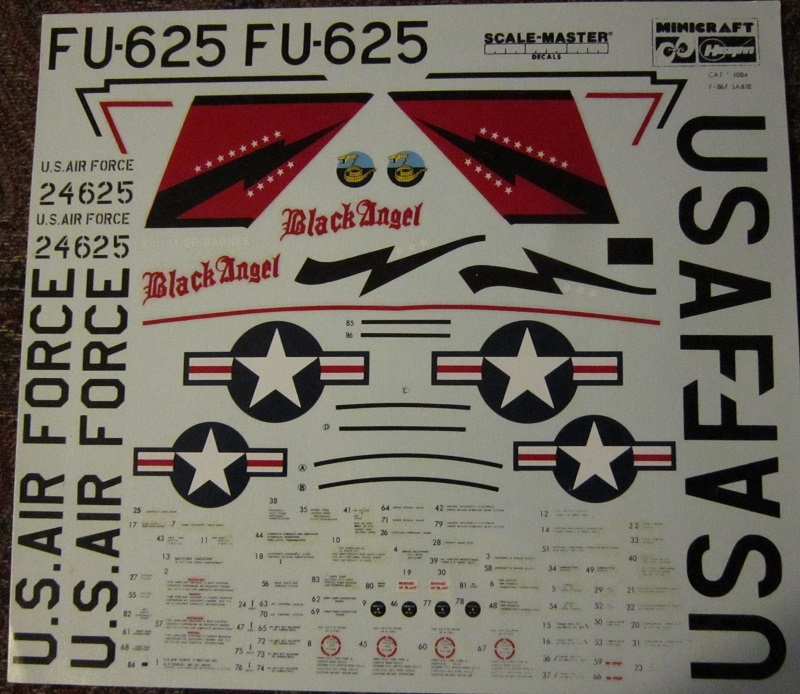 The instructions consist of a staple bound booklet of 12 pages in 8 ½” by 11” page format.

Page 1 begins with a black and white repeat of the box art, followed by the history of the F-86 in English. Minicraft-Hasegawa’s street address in Torrance, Ca appears at the bottom of the page.

Pages 2 trough 6 give a grand total of 12 assembly steps.

Page 7 gives a 2-view, showing the top and bottom of the box art scheme. Which is the ONLY scheme provided in the kit.

Page 8 has a side view of the box art subject with 5 grainy black and white walk around photos of an actual F-86.

Page 9 has a 2-view illustration of both sides of the F-86F showing where to place stencil markings. Below these is 3 more grainy black and white photos of a F-86’s cockpit instrument panel and main landing gear

Page 10 has a 2-view illustration of the top and bottom of the F-86F showing where the stencil markings go there.


Page 11 and 12 have the parts trees illustrations on them. Next to the trees is names of what all the parts are. This sure helped me with this review, as I had no idea what half the stuff was….sigh. Thanks Minicraft-Hasegawa.


After I won this kit in a raffle at what was a IPMS National Contest in St. Louis I purchased some after-market things for it.

One was a sheet of Micro Scale brand decals that gives me 3 alternate markings, so that I’m not locked in on the one option in the kit that every modeler that has this kit is going to mark their kit as.

I bought a second sheet of decals, also by Micro Scale that is a long strip with just black and white checkerboard on it. These were used on the tails of several F-86’s. 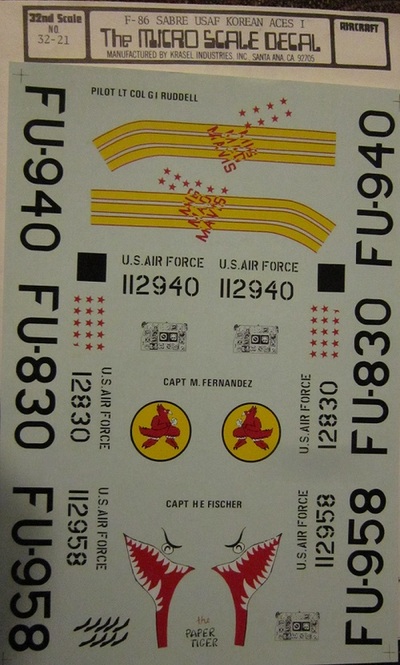 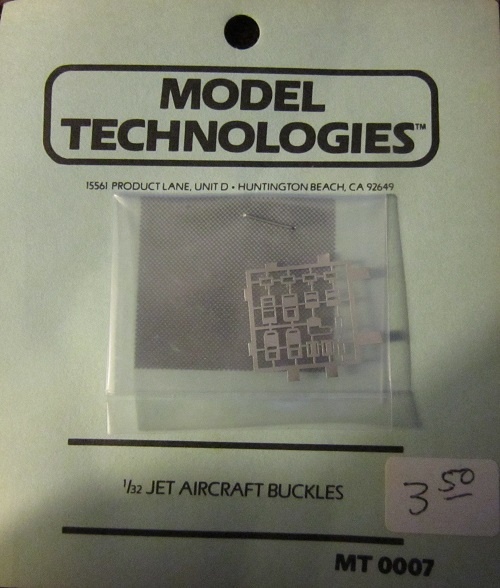 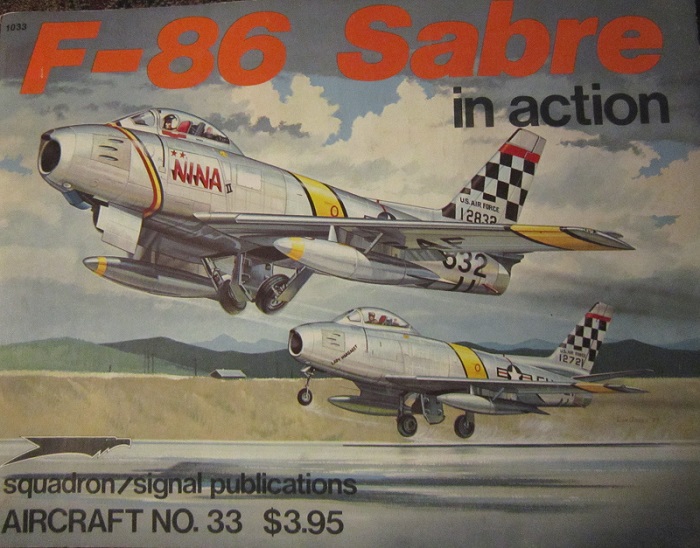 I bought the Air Classics magazine for August 1981 that has an article in it titled “Nifty Fifties Air Force”, pages 24 to 35 all about Sabres. 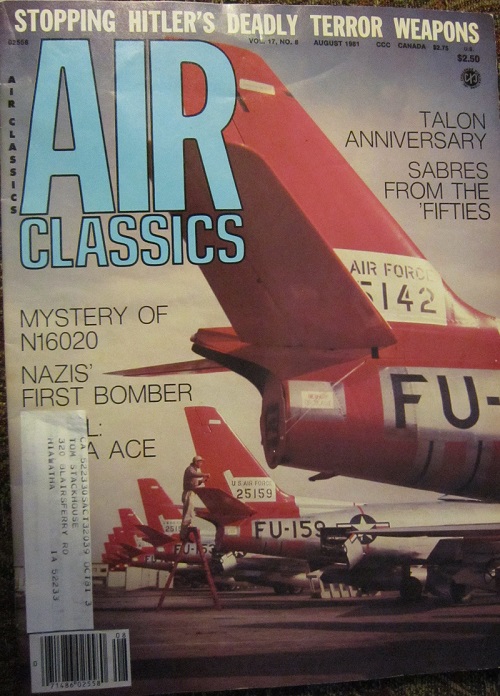 This kit still had a price tag left on it by the store that donated the kit for the raffle. It says $14.00. Wow….I can just imagine what a kit of this quality and size would cost today.

Highly recommended to modelers of advanced modeling skills, due to it’s complexity (especially doing the wiring on the jet engine).