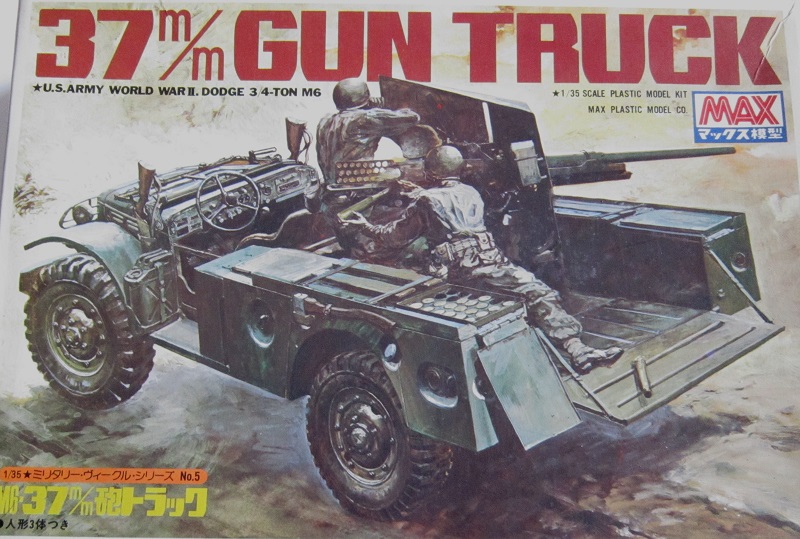 
The Dodge WC-55 M6 anti-tank gun truck is based on the ¾ ton, all-wheel-drive, standard truck of the U.S. Army. A number of special vehicles were based on the 3/4 ton chassis.

The Dodge WC-55 M6 truck was equipped with a 37 mm anti-tank gun with a light shield for the gun crew and first saw action in the early years of WWII. Due to its light shield, it proved to be rather vulnerable to enemy fire. However, it was fast and very mobile.

Max (sometimes Peerless Max) was a company based in Japan that went out of business.

The box art shows a M6 with 2 men manning the 37 mm. It is overall olive drab and shows no markings.

One side panel has 2 color photos of the model made up, followed by what I think is a one paragraph history of the vehicle in just Japanese. The box is labeled MADE IN JAPAN.

The other side panel begins with a cartoon of 2 soldiers. One is pointing with his right arm outstretched and shouting at the other guy. This is followed by color box arts of three other kits that MAX marketed back in the 70’s: a Dodge ¾ ton weapons carrier “Beep” pulling a trailer, kit no. 3503, a Dodge ¾ ton command and reconnaissance truck, kit no. 3505. a Dodge 1 ½ ton personnel carrier, kit no. 3506.

This kit is the first boxing of the kit. It was later re-released by Italeri and Bilek brands.. Everything inside later on in the other brands - the instructions, decals, etc. were pretty much identical with very minor changes.

The molds go back to the mid 1970’s. This kit was originally produced by a Japanese firm called Max (later sometimes called Peerless/Max). Back then it was kit no. 3504 for them and sold for just under 8 bucks. Today’s prices for a similar kit would probably cost 3 to 4 times that with inflation. Oh…the good old days!

The decals are identical to the original Max kit in the 2 re-pops by the other 2 brands,.that I have in my stash too.

The parts trees are laid out differently in places, but the parts are the same in the 2 re-pops. This original kit has 2 figures in it though, where the Bilek and Italeri kits have boiled this down to just the driver.

The re-written Italeri instructions are easier to follow than the all Japanese ones in this original Max kit. . Italeri’s are multi-lingual, including English, and the assembly drawings are less complicated too. The very dark green plastic that the two kits are molded in is very similar in shade.

The parts seem to look good.  I found no flash or warpage in the kit.

By the way, Italeri sells this same kit under their banner as kit no. 245. Max puts all there parts in their kit into several cello bags, but Italeri insists on throwing the parts of their kits "naked" into their boxes- the Bilek boxing is this way too.

This is one of my pet peeves with Italeri - they need to put stuff in cello bags!.

My MAX kit arrived with the steering wheel and 2 other small parts ripped off the trees and floating around the box.

Although Max went bankrupt, and all their molds were eventually sold to Italeri, their products were highly detailed and years ahead of the state of the art for armor kits back in the 70’s. Their molds still can hold their own against other armor kit companies even in today’s market.

Max’s last 3 announced armor kits were to be a U.S. dump truck, a Stuart M8 howitzer version tank, and the Styr RSO tractor with the wooden cab pulling a squeeze bore weapon. Italeri did do the wood cabin Styr later, but the first 2 subjects mentioned never have appeared nor the squeeze bore weapon from them. Tamiya however offered the M8 in their line.

There are 6 very dark green parts trees in the kit . Also included is a clear parts tree, some metal rods to use for the axles, the decal sheet, instructions and a booklet showing all manner of U.S. trucks in black and white photos of the actual vehicles and drawings of some. 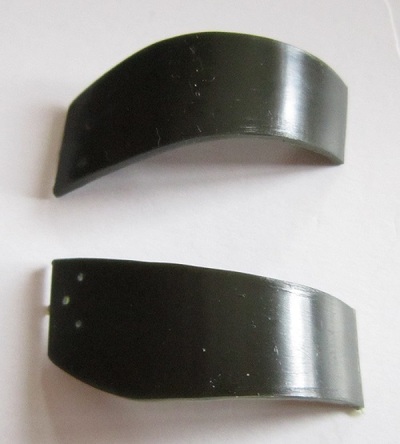 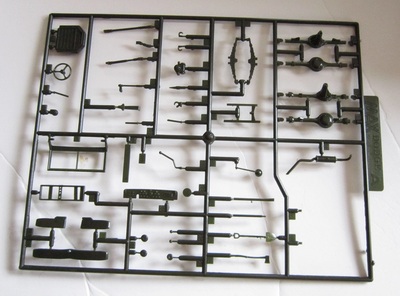 The dark green letter B parts trees holds: the tires, front floor board, seats, 2 alternate grills (one is not needed), & 4 very poorly detailed and inaccurate jerry cans with their holders molded integrally. These cans have only one central carrying handle on them. They should have 3 handles.

Tamiya’s U.S. truck cargo load kit will provide better alternatives to these. However, you will have to do the holders from scratch using the Bilek/Italeri ones as kind of a guide for making these. (42 parts) 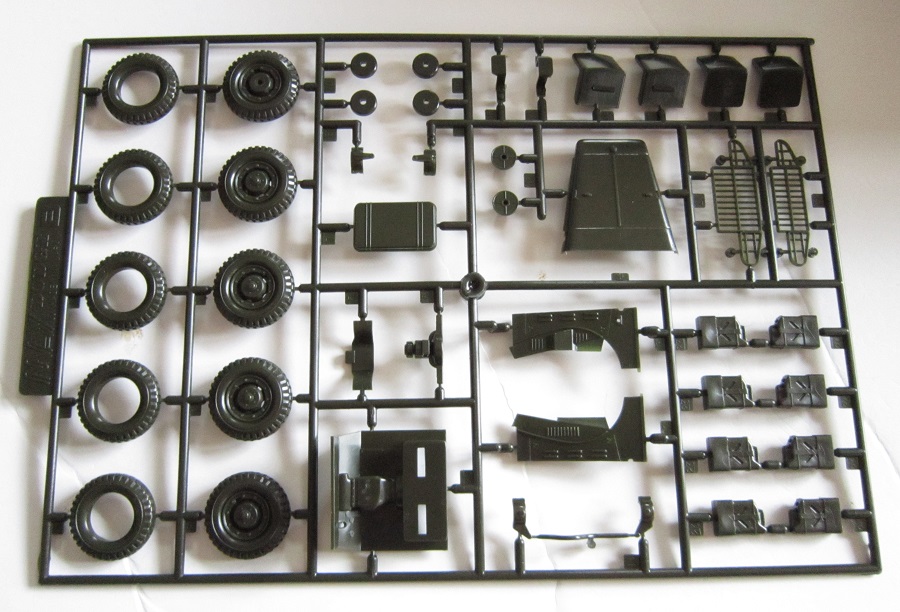 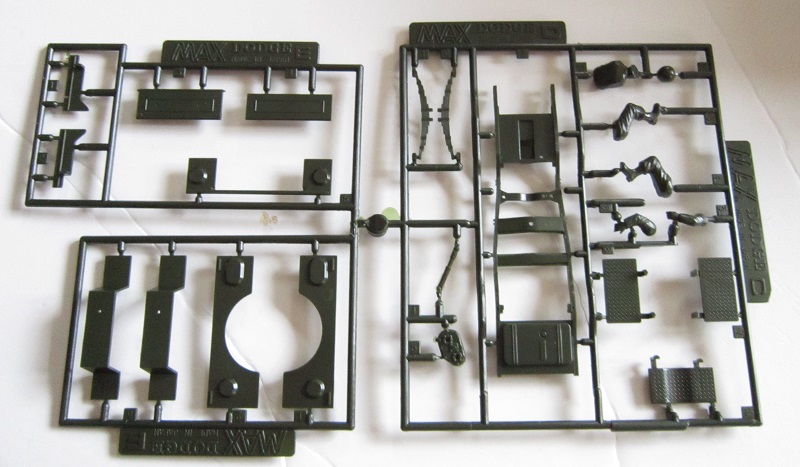 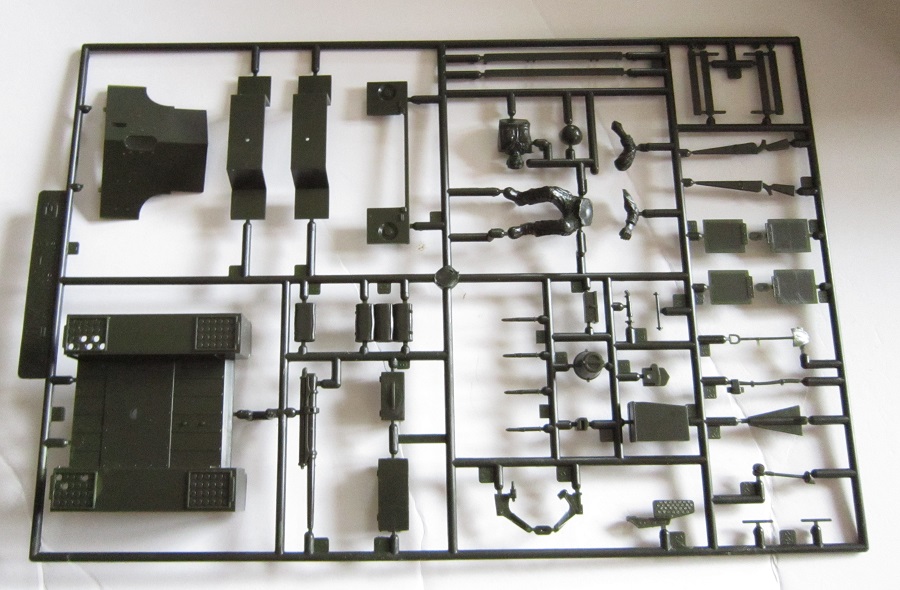 A clear plastic tree contains the windshield piece with the wipers molded into it. 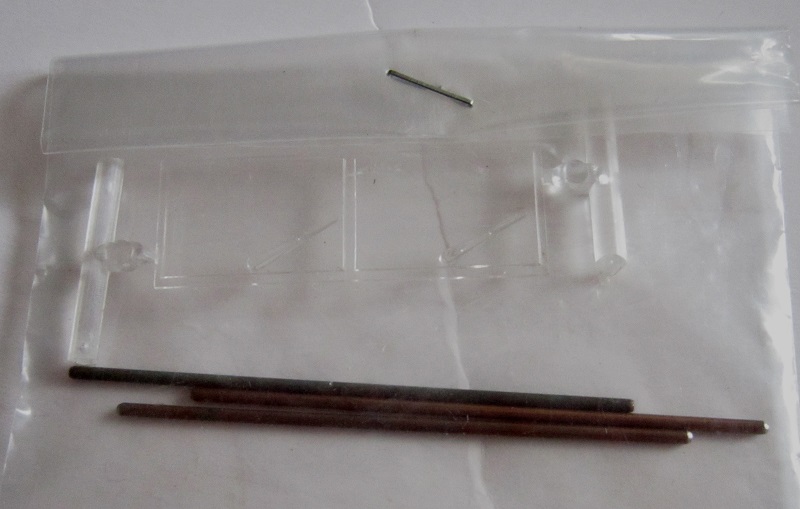 The decal sheet has turned yellow and discolored and best replaced by an after-market sheet. Which is exactly what I have done. I purchased the Microscale brand sheet of U.S. Armor Codes & Insignia, set no. 13-0011. 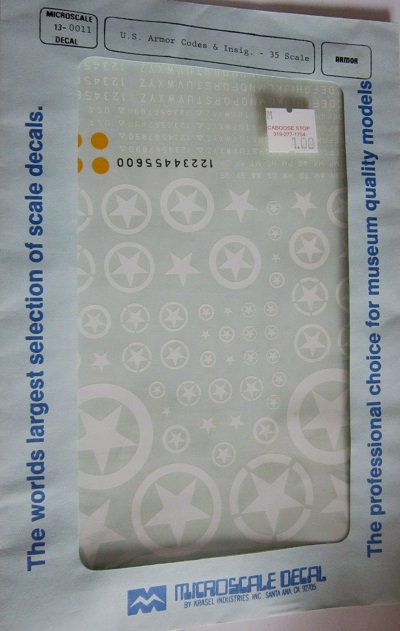 The instructions are in Japanese only.

They consist of a single sheet that accordion folds out into 6 pages in 7” x 10” page format.

Decals are only offered for one unit. Unfortunately, there is no mention as to what outfit this is or where it served. Too bad! No great loss because they’re yellow now and useless.

I highly recommend this kit to all those modelers who like US WWII soft-skinned vehicles.

The only gripe I have is with the inaccurate Jerry cans. You will also have to drill out the many cup marks molded into a breech guard, part no. G13. These were actually holes on the real gun and not cups as molded in the kit part. Some string will also have to be scrounged up to wrap around the winch on the front bumper.

All in all, it is a nice  old kit, later in what must be its third or fourth reincarnation. I am sure that it will find it’s way into a lot of new armor modeler’s collections that did not have a chance to get it in the Max box in the past.

Highly recommended. Kit was courtesy of my wallet back in the 70’s when kits were still reasonably priced.