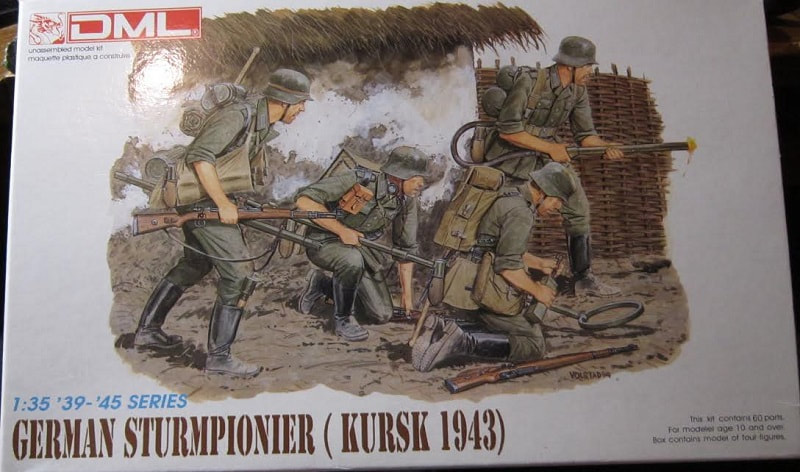 This kit comes in a shrink-wrapped end openting type box. I am no fan of this type of box, because invariably the decal sheet or parts find their way past one of the end flaps to become lost forever. Give me a tray and lid type box any day of the week.

One corneer of the box art says that the kit is designed for modelers 10 years and older and that it contains 63 parts.

The box art shows 4 sturmpionieers next to a white house with a thatched roof  and a fence woven from wood branches. All four figures wear field grey uniforms with steel helmets. Their pants are tucked into black jack boots.

The leading standing soldier is armed with a flame-thower. He has the fuel tanks on his back and an canteen on his belt.

The second soldier is kneeling on both his knees and has a large canvas bag on his back and a smaller one on his belt with a canteen. He has apparatus in his hands that I cannot identify. His 98K carbine is lying on the ground beside him.

The 3rd soldier has large canvas bag on his back and a smaller one on his chest. He has a canteen on his belt He holds a mine detector in his right hand.

The 4th soldier is standing and he has a mess kit and rolled canvas tarp on his back, a gas mask canister and a canteen on his belt, a large canvas bag slung over his right arm. He carries a replacement flame thrower barrel in his left hand and a 98K carbine in his right.

​The bottom of the box serves as the assembly and painting instructions. There are four color 2-views of each figure and a color swatch showing the color pattern on a rolled canvas tarp. Below these there are black and white line drawings of a flame thrower (flammenwerfer 41),  engineers assault pack and pouches and a mine detector Aachen 40.

All the illustrations were done by DML's resident artist Ron Volstad. 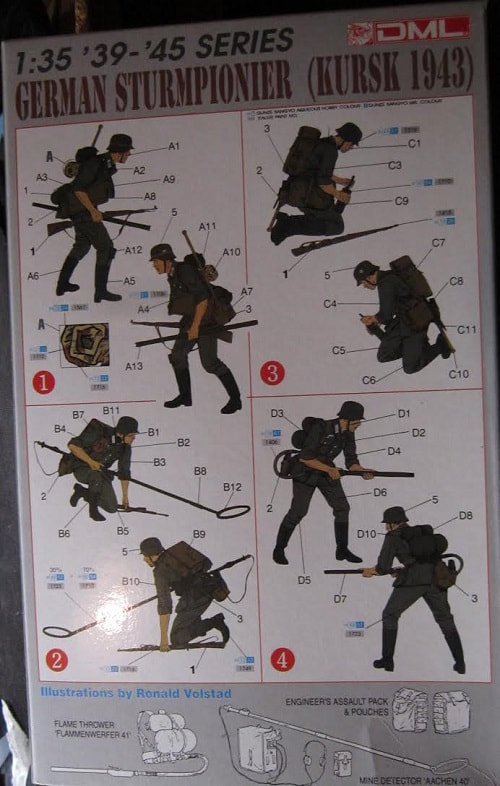 The kit holds a large light tan tree and a small light-grey tree. There is no decal sheet.

The large light tan tree holds: the four figures which are divided into separate heads, torsos, arms and legs. 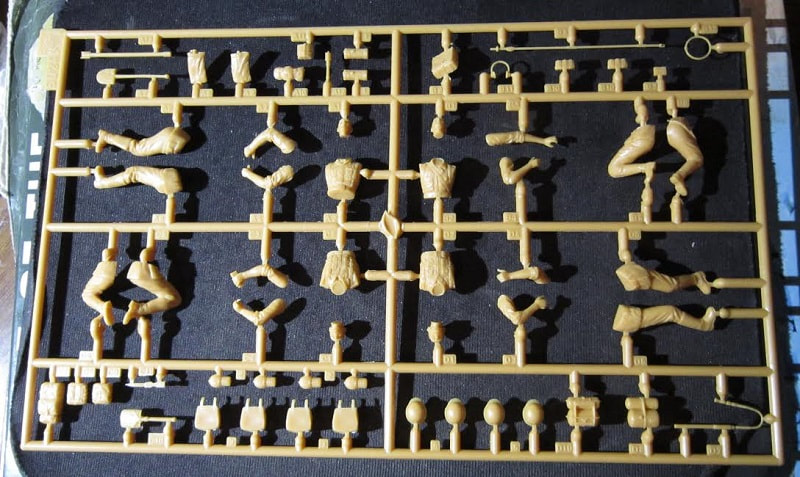 ​These figures are well detailed and posed and will make into a neat diorama.

Highly recommended.
I purchased my kit back in the 90's at my local hobby shop.