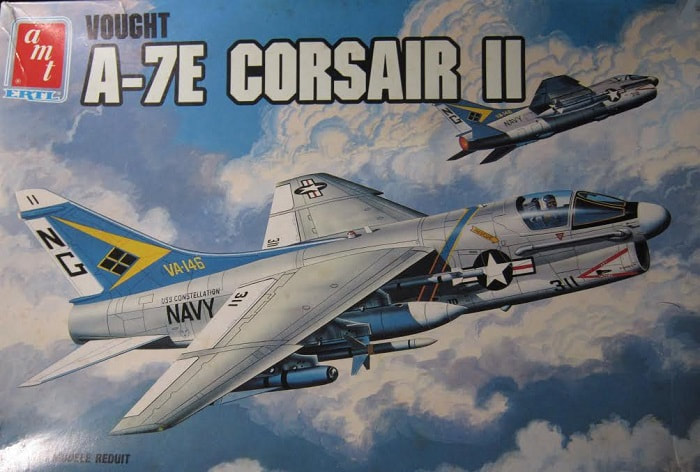 The LTV A-7 Corsair II is an American carrier-capable subsonic light attack aircraft designed by Ling-Temco-Vought to replace the Douglas A-4 Skyhawk. Its airframe design was a somewhat smaller version of the supersonic Vought F-8 Crusader.

The Corsair II initially entered service with the United States Navy (USN) during the Vietnam War. It was later adopted by the United States Air Force (USAF), including the Air National Guard, to replace the Douglas A-1 Skyraider and North American F-100 Super Sabre.

The aircraft was also exported to Greece in the 1970s, and to Portugal in the late 1980s.
In 1962, the United States Navy (USN) began preliminary work on the VAX (Heavier-than-air, Attack, Experimental), a replacement for the A-4 Skyhawk with greater range and payload. Particular emphasis was placed on accurate delivery of weapons to reduce the cost per target. The requirements were finalized in 1963, announcing the VAL (Heavier-than-air, Attack, Light) competition.

To minimize costs, all proposals had to be based on existing designs. Vought, Douglas Aircraft, Grumman and North American Aviation responded. The Vought proposal was based on the successful Vought F-8 Crusader fighter, having a similar configuration, but shorter and more stubby, with a rounded nose.

It was selected as the winner on 11 February 1964, and on 19 March the company received a contract for the initial batch of aircraft, designated A-7. In 1965, the aircraft received the popular name Corsair II, after Vought's highly successful F4U Corsair of World War II.[citation needed] (There was also a Vought O2U Corsair biplane scout and observation aircraft in the 1920s.)

Compared to the F-8 fighter, the A-7 had a shorter, broader fuselage. The wing had a longer span, and the unique, variable incidence feature of the F-8 wing was omitted.
To achieve the required range, the A-7 was powered by a Pratt & Whitney TF30-P-6 turbofan producing 11,345 lbf (50.5 kN) of thrust, the same innovative combat turbofan produced for the General Dynamics F-111 Aardvark and early Grumman F-14 Tomcats, but without the afterburner needed for supersonic speeds. VA-147 was the first operational USN A-7 squadron, in 1967.

The aircraft was fitted with an AN/APQ-116 radar, later followed by the AN/APQ-126, which was integrated into the ILAAS digital navigation system. The radar also fed a digital weapons computer which made possible accurate delivery of bombs from a greater stand-off distance, greatly improving survivability compared with faster platforms such as the McDonnell Douglas F-4 Phantom II.

It was the first U.S. aircraft to have a modern head-up display, (made by Marconi-Elliott), now a standard instrument which displayed information such as dive angle, airspeed, altitude, drift and aiming reticle. The integrated navigation system allowed for another innovation – the projected map display system (PMDS) which accurately showed aircraft position on two different map scales.

The A-7 had a fast and smooth development. The YA-7A made its first flight on 27 September 1965,[4] and began to enter Navy squadron service late in 1966. The first Navy A-7 squadrons reached operational status on 1 February 1967, and began combat operations over Vietnam in December of that year.

The A-7 offered a plethora of cutting-edge avionics compared to contemporary aircraft. This included data link capabilities that, among other features, provided fully "hands-off" carrier landing capability when used in conjunction with its approach power compensator (APC) or auto throttle.

Other notable and highly advanced equipment was a projected map display located just below the radar scope. The map display was slaved to the inertial navigation system and provided a high-resolution map image of the aircraft's position superimposed over TPC/JNC charts.

Moreover, when slaved to the all-axis auto pilot, the inertial navigation system could fly the aircraft "hands off" to up to nine individual waypoints. Typical inertial drift was minimal for newly manufactured models and the inertial measurement system accepted fly over, radar, and TACAN updates.

AMT/Ertl was a company based in Dyresville, IA, 52 miles NE of me. I went there often to their factory discount store and bought kits cheaply. This is one of them.

Ertl started out years ago as a manufacturer of metal farm toys - tractors, plows, combines etc. They later hooked up with Esci in Italy for plastic models and used their molds. They have gone out of business and the factory has been sold to another toy company.
This kit comes in a blousy shrink-wrapped box. It has a large letter "L" void around the parts inside.

The box art shows 2 A-7E's flying above the clouds.

Both are light-grey FS 36440 over gloss-white FS 17875. They have white noses and white wing flaps, elevators and rudder flap and a white rudder top. The rest of the rudder is blue, with a yellow chevron and black square divided into 4ths and a yellow VA-146.

The white rudder flap has large black letter N G on ti and the rudder tip has a black no. 11.
On the fuselage sides is USS CONSTELLATION over NAVY in black. Black no. 311 is above the wings on both the flaps and again on the sides of the nose.

The A-7E in the background has the black no. 312 on the sides of the nose, everything else the same.

These aircraft are from VA-146, AB-311 "Blue Diamonds" aboard the U.S.S. Constelllation carrier.

One side panel shows 3 color photos of the model made up in the box art scheme and one photo of the nose of the other scheme made up.

​This one is overall grey with ghost-grey markings. It has AB on the rudder with the squadron's logo and a black 314 on the rudder tip, sides of the nose and atop the wing flaps.
It is with VA-46, AB-314 "Clansmen" U.S.S. America carrier.

Features of the kit are given as: Includes decals for 2 versions: U.S. Navy VA-94 and VA-46, positionable canopy and landing gear, over 90 parts, paint and cement are not included, in English and French.

The other side panel shows this A-7E "Clansmen" aircraft again in a color photo made up and showing it all this time. 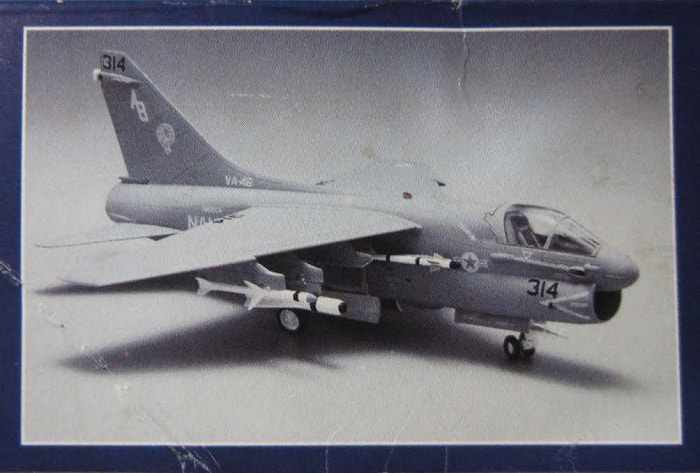 This is followed by a one paragraph history of the A-7E in English and French, followed by the 1989 copyright date of the kit and Ertl's address in Dyresville, IA and their Ontario, Canada office address. Kit was made in Italy (probably by Esci ?) and printing was done in the U.S.
​WHAT'S IN THE BOX:

This kit contains 6 chalk-white trees and a clear tree in a sealed cello bag, the decal sheet, instructions and a form to subscribe to Ertl's Blueprinter newsletter for $6.00 per year (now defunct). 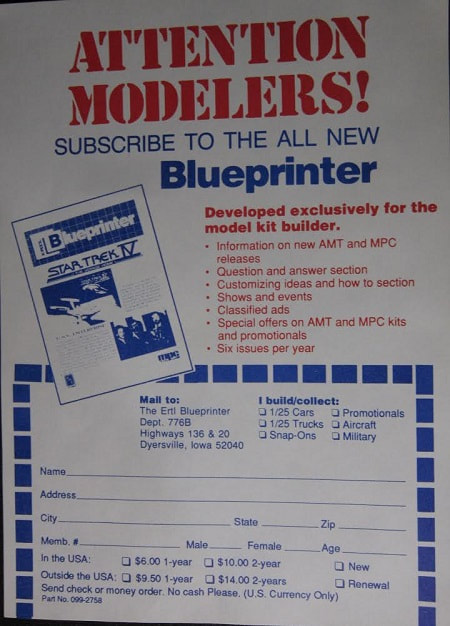 The instructions consist of a large single sheet printed on both sides that is accordion-folded into 6 pages in 7 1/2" x 17 1/2" page format.

Page 1 begins with a black and white repeat of the box art, over the history of the A-7E in English and French and Ertl's phone numbers to use to contact them with any problems with the kit.

Pages 2 through 4 have WARNINGS, a paint listing, decal applications instructions and 9 assembly steps.

Pages 5 and 6 have two 4-views of the two color and marking schemes (aleady described above). 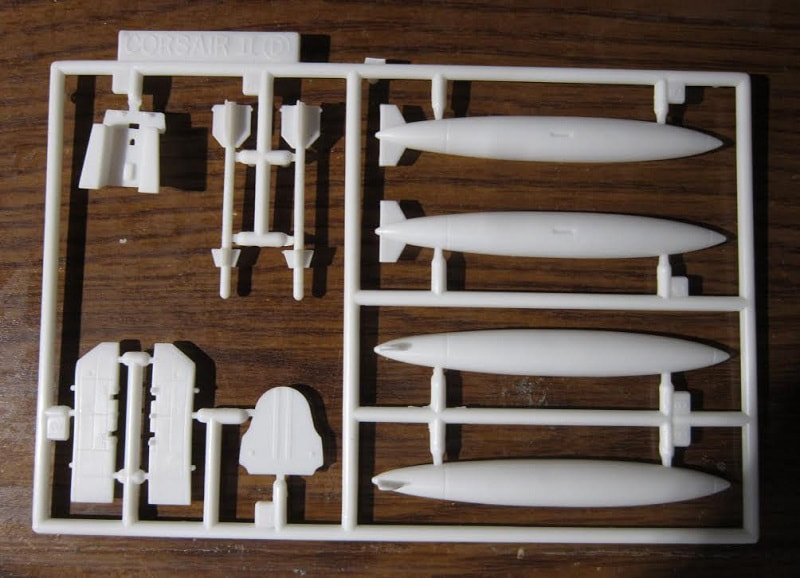 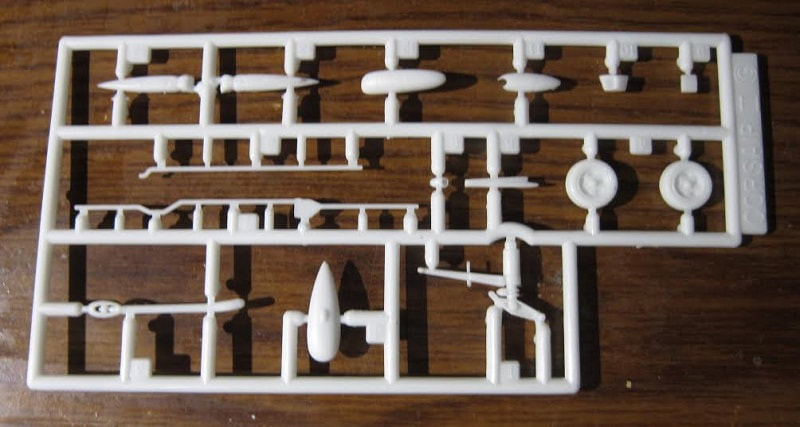 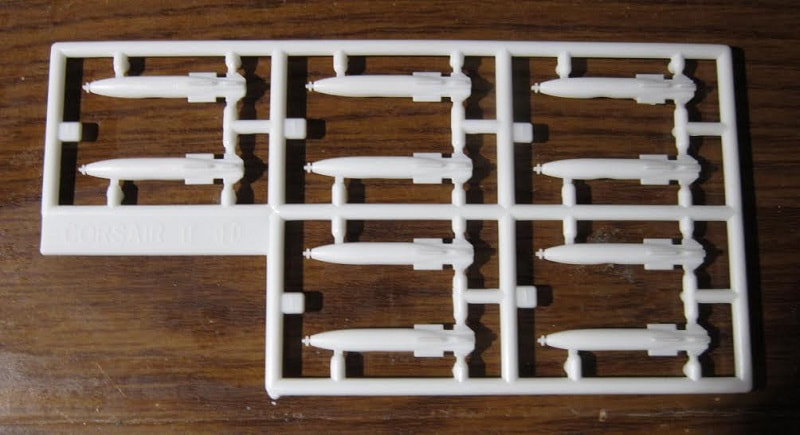 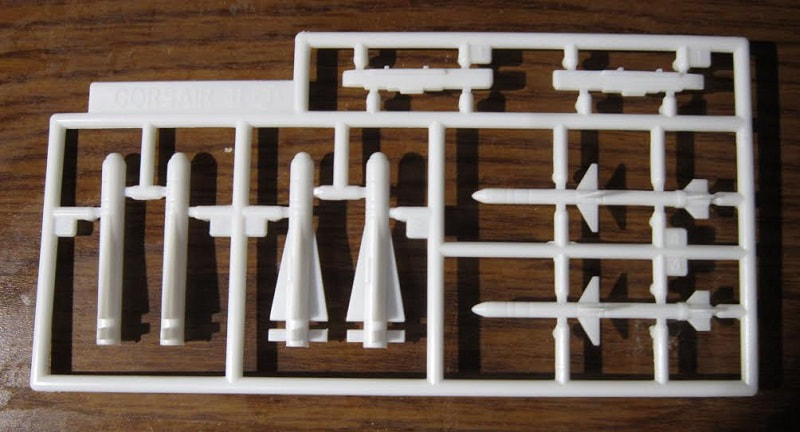 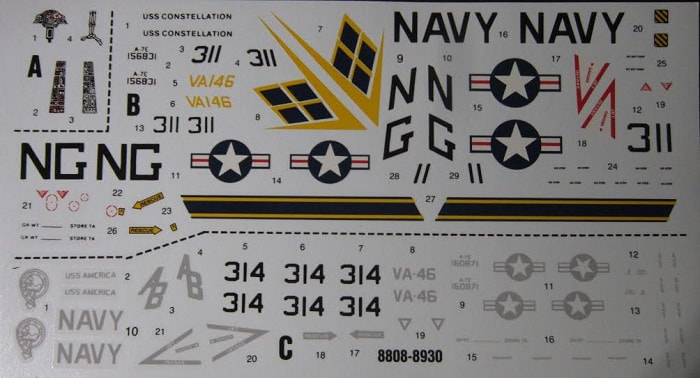 ​This is a neat modern U.S. Navy aircraft. However, my bag is WWII aircraft. So, this kit is for sale for a decent offer + postage.