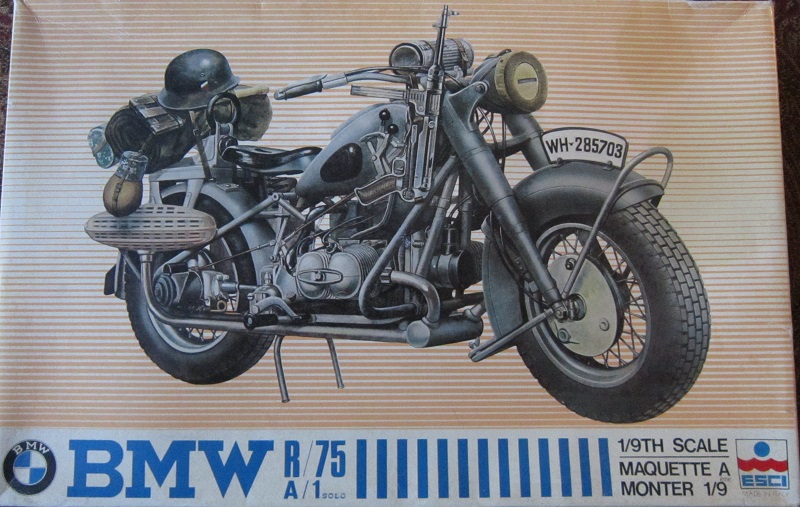 The BMW R75 is a World War II-era motorcycle and sidecar combination produced by the German company BMW.

In the 1930s BMW were producing a number of popular and highly effective motorcycles. In 1938 development of the R75 started in response to a request from theGerman Army.

Preproduction models of the R75 were powered by a 750 cc side valve engine, which was based on the R71 engine. However it was quickly found necessary to design an all new OHV 750 cc engine for the R75 unit. This OHV engine later proved to be the basis for subsequent post-war twin BMW engines like the R51/3, R67 and R68.

The third side-car wheel was driven with an axle connected to the rear wheel of the motorcycle. These were fitted with a locking differential and selectable road and off-road gear ratios through which all four and reverse gears worked. This made the R75 highly manoeuvrable and capable of negotiating most surfaces. A few other motorcycle manufactures, like FN and Norton, provided an optional drive to sidecars.

The BMW R75 and its rival the Zündapp KS 750 were both widely used by the Wehrmacht in Russia and North Africa, though after a period of evaluation it became clear that the Zündapp was the superior machine. In August 1942 Zündapp and BMW, on the urging of the Army, agreed upon standardization of parts for both machines, with a view of eventually creating a Zündapp-BMW hybrid (designated the BW 43), in which a BMW 286/1 side-car would be grafted onto a Zündapp KS 750 motorcycle. They also agreed that the manufacture of the R75 would cease once production reached 20,200 units, and after that point BMW and Zündapp would only produce the Zündapp-BMW machine, manufacturing 20,000 each year.

Since the target of 20,200 BMW R75's was not reached, it remained in production until the Eisenach factory was so badly damaged by Allied bombing that production ceased in 1944. A further 98 units were assembled by the Soviets in 1946 as reparations.

However the standardisation programme meant that machines that were produced by BMW and Zündapp used 70% of the same components. This simplifies the supply of spare parts for these vehicles, many of which are still in the hands of historic motorcycle enthusiasts. These vehicles are still highly desirable as collector's items because of their complex and durable technology, and are correspondingly expensive. A well-restored R75 can be still used for everyday purposes, on or off-road without problems.

In 1954 a small number of modified R75 models were produced at Eisenach (then in Soviet-controlled East Germany) for testing under the designation AWO 700, but were not put into full production.

Esci was a prolific model company based in Italy. They produced all manner of model subjects in the popular scales. I am pretty sure they went out of business. Their models were once sold under the Ertl label (Ertl in Dyresville, Iowa) and later even under the DML and the Revell of Germany labels. I have a kit or two boxed by these last companies.

This kit came in a shrink wrapped tray and lid type box. The box art shows a B.M.W. R-75A/1 in overall Panzer-grey with a white license plate on the front fender with the black serial no,. WH-285703 on it. (this number is on the decal sheet in the kit), It has a tarp, steel helmet and canteen slung on the back and a MP40 machine-pistol hung from it’s strap on the handle bars and a gas mask canister strapped to the top of the handle bars. It is posed against a background of narrow horizontal orange and white barber stripes.

One side-panel of the box has color illustrations of 4 other 1/9th scale military motorcycles that Esci also marketed:

The other side panel continues with color illustrations of 4 more 1/9th scale AFV’s that Esci marketed: 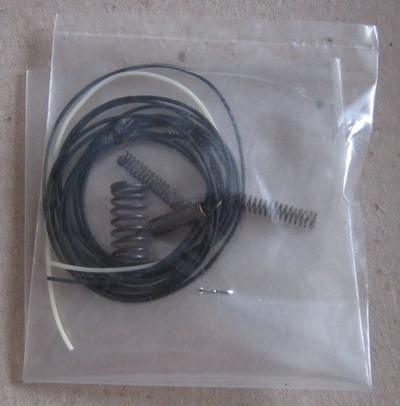 Page 1 of the instructions begins with a black and white illustration of the bike similarly equipped like the box art one, but with the license number WH-748488. This is followed by IMPORTANT INFORMATION regarding the kit in Italian, English, French, German and Spanish.

These threes are NOT alphabetized.

There are also no part numbers on tabs next to the parts on the sprues.

Each tree illustrations has a spread of numbers on it for the parts shown. This is going to make for extra work to make sure you get the right parts for each assembly. Bad move Esci !!

Page 3 through 7 give a grand total of 22 assembly steps.

Page 8 has a 5-view line drawing of the motorcycle with numbers pointing to where to place the numbered marked items on the decal sheet.

Badges for a signal unit. 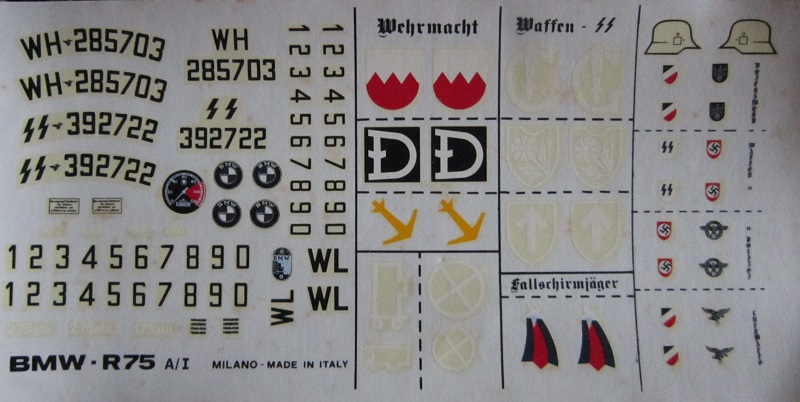 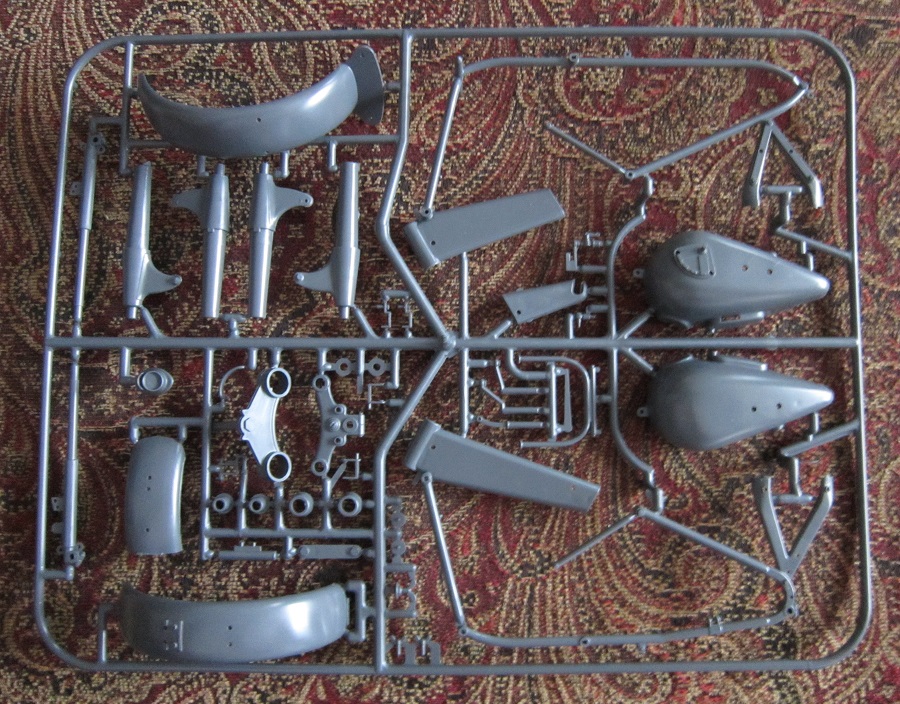 Panzer-grey parts tree numbered 37 to 98 holds: the engine parts, cylinders, tools etc. (69 parts) These tools must be excess, because they are not showed anywhere in the assembly steps. 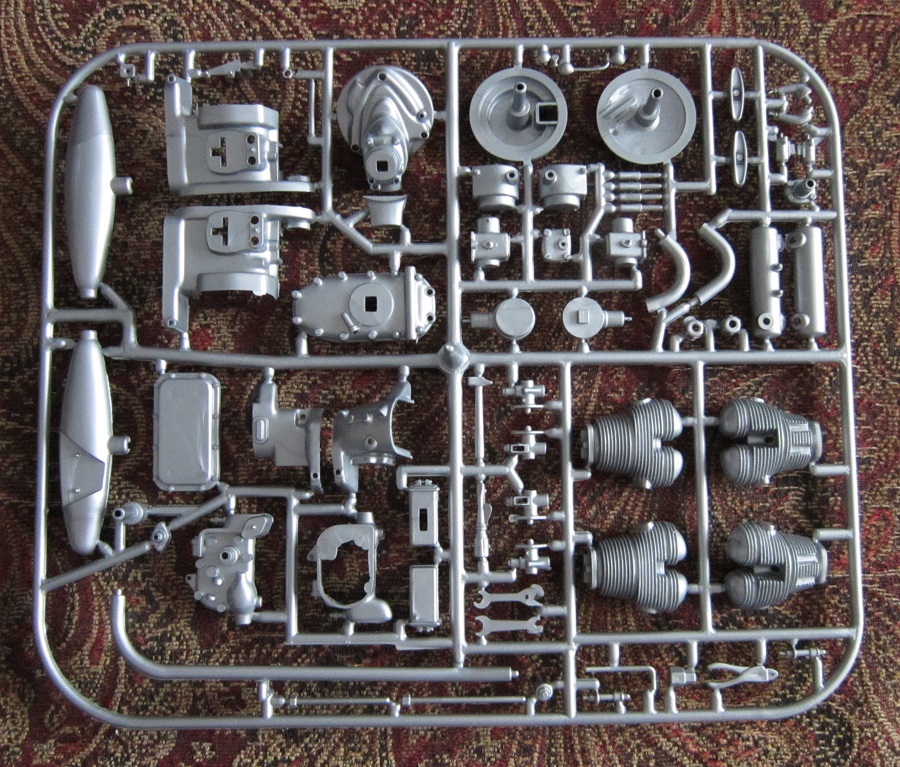 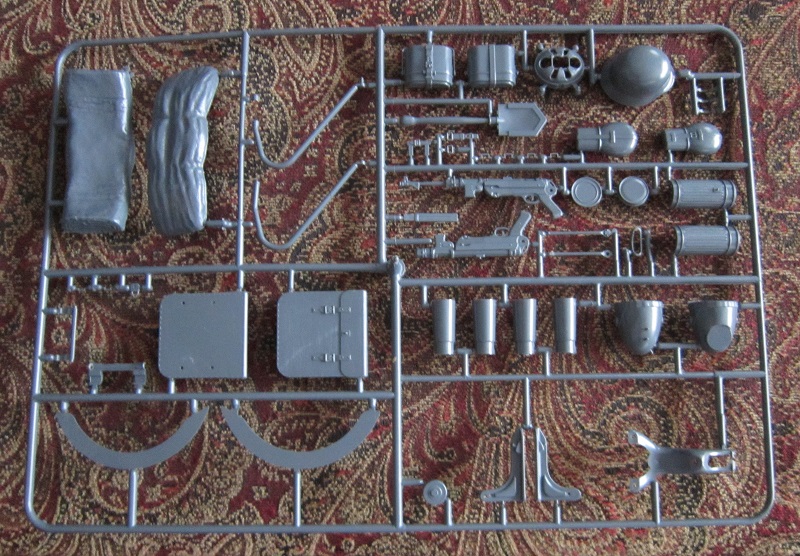 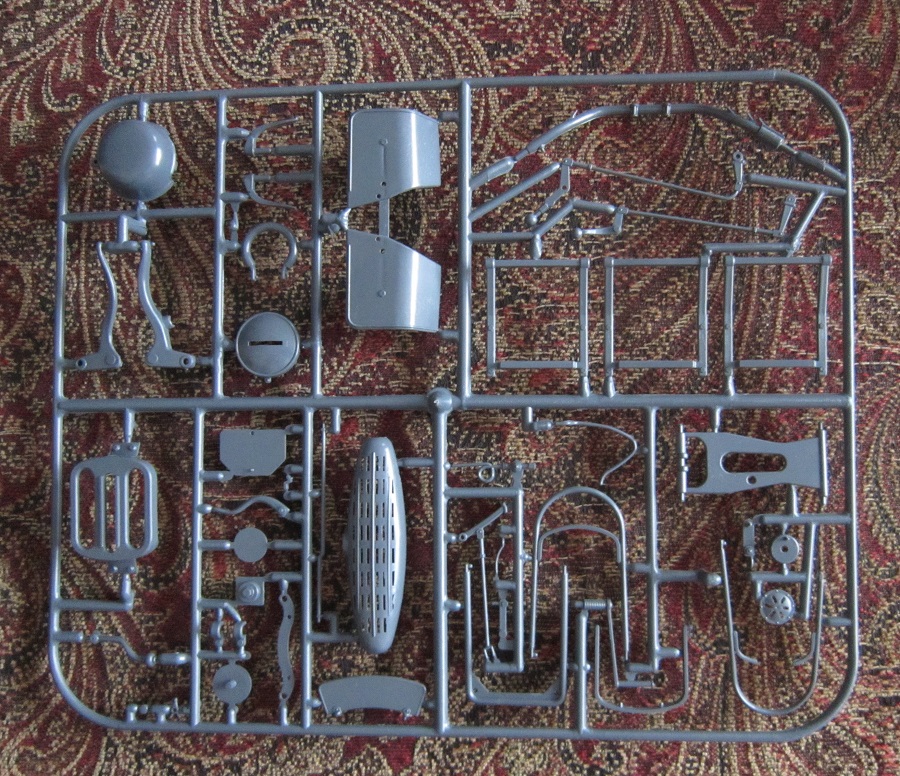 The clear parts tree is numbered 180 to 185. It holds light lenses and the base name plate (5 parts) 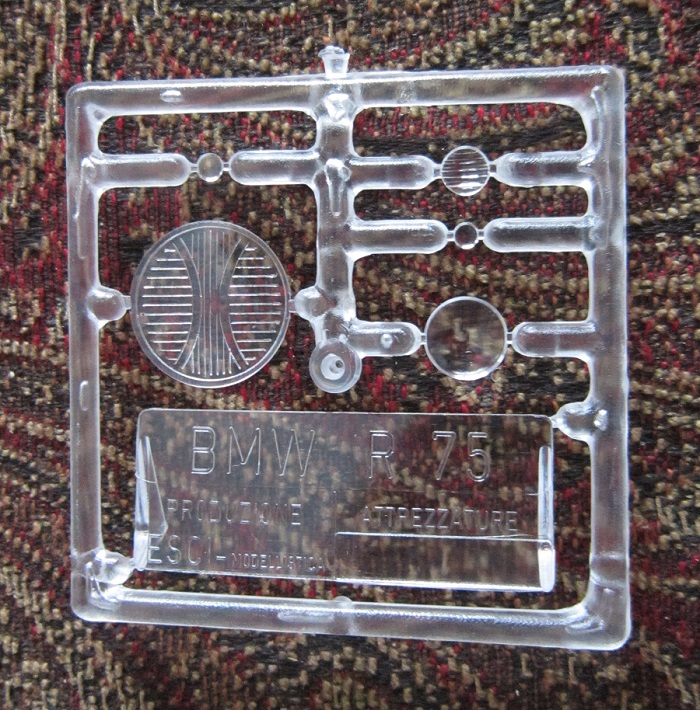 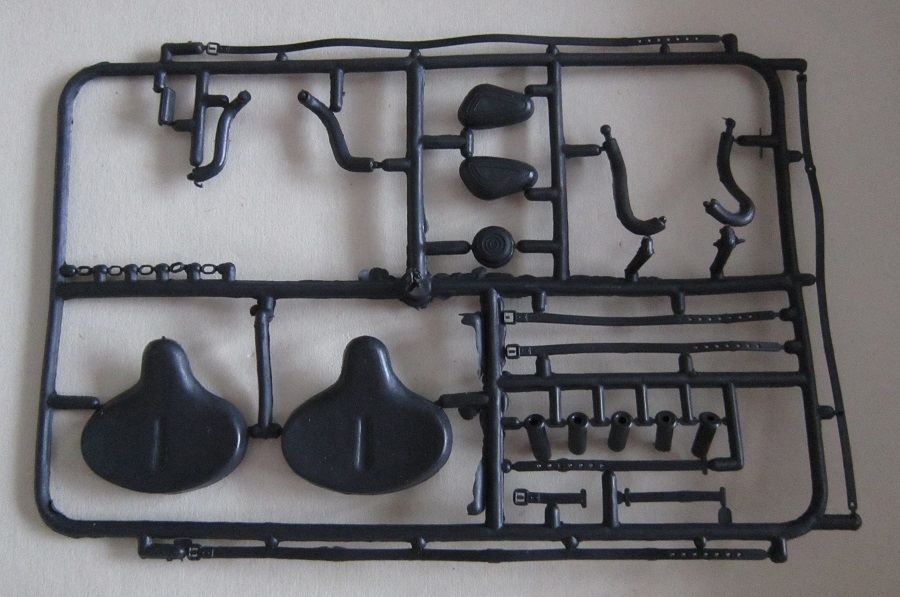 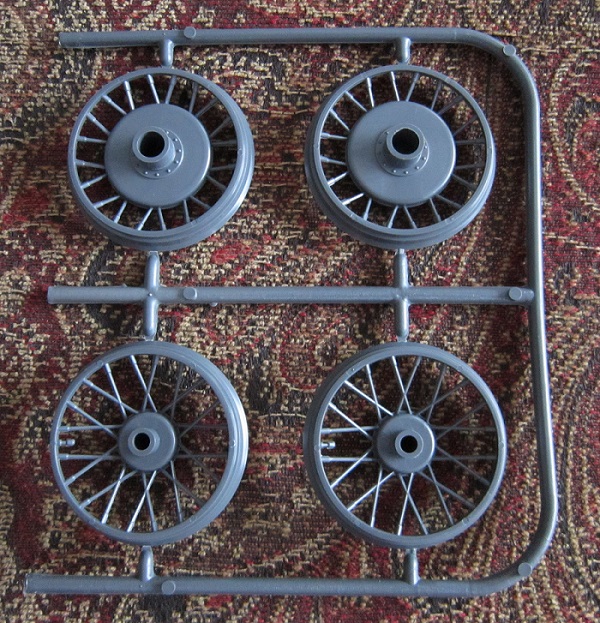 This is one neat large kit with a lot of detail.

Due to it’s complexity, it is not for the novice modeler nor is it a weekend project. I highly recommend it to modelers of advanced modeling skills.

Kit was courtesy of my wallet years ago. I’m pretty sure I got it back in the 70’s.