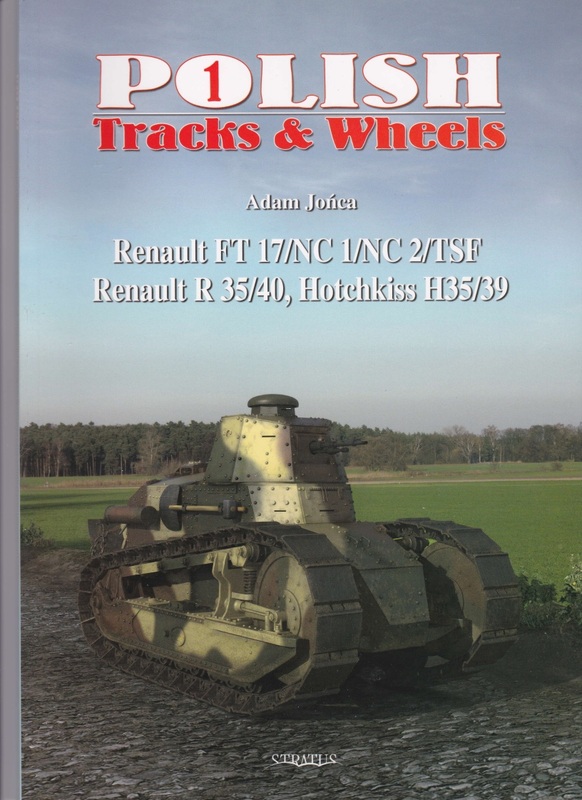 
MSRP (USD) $27.00
Reviewed by Ray Mehlberger
Mushroom Model Publications (MMP) is based in the UK. They have their books printed in Poland by Stratus in the English language. MMP now has a U.S. distributor for their books, located in Pennsylvania by the name of Casemate.

On 22 March 1919, the French 505 Tank Regiment (505 Regiment des Chars Blindes) stationed at Martigny les Bains in the Vosges Department, began it’s transformation into the Polish 1st Tank Regiment (1 Pulk Czolgow / 1-er Regiment des Chars Blindes Polonais. The newly formed Polish unit obtained all the equipment and armament, but a large part of the personnel remained French. The regiment retained it’s commander, most of the French officers and non-commissioned officers, as well as many tank drivers and gunners. The auxiliary sections consisting of the repair workshop and transportation units also kept most of their original staff.
This book is soft cover in 8” x  11 ¾” page format and tells this story in it’s 104 pages, with 204 black and white photographs and 2 in color on the covers. There are 25 highly detailed color profiles (one of these is a 2-view and one is a 4-view). Also included are 3 color illustrations of unit markings, a color illustration of a French tanker’s badge emblem and 17 photos of various Polish tanker’s badges.

The color profile illustrations are positioned on the same pages as the actual black and white photos of the vehicles being illustrated. Neat!
This book will be of great interest to military historians and enthusiasts, but most of all to modelers. There are kits around of the FT-17 and the Hotchkiss H-35/39.
Highly recommended.

I want to thank Mushroom Model Publications (MMP) and Casemate for this review sample.