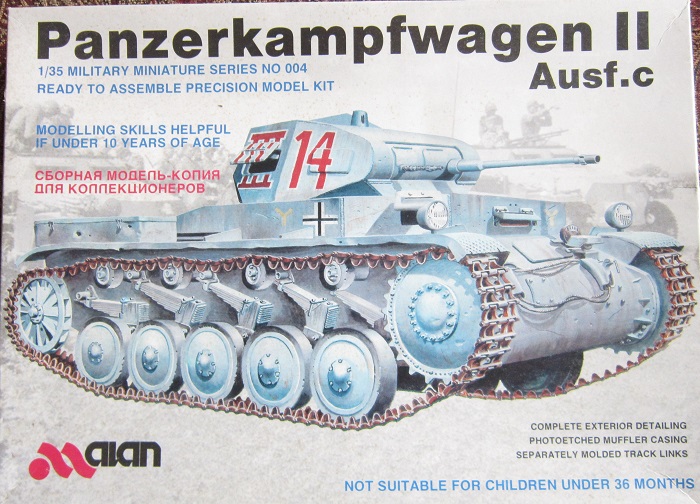 Alan was  a model company once based in St. Petersburg Russia and now out of business. The only ever did models of WWII AFV’s. All their molds went to the Ark model company.

The Panzer II is the common name used for a family of German tanks used in World War II. The official German designation was Panzerkampfwagen II(abbreviated PzKpfw II).

Although the vehicle had originally been designed as a stopgap while larger, more advanced tanks were developed, it nonetheless went on to play an important role in the early years of World War II, during the Polish and French campaigns. The Panzer II was the most numerous tank in the German Panzer divisions beginning with the invasion of France. It was used in both North Africa against the British and on the Eastern Front against the Soviet Union.

The Panzer II was supplemented by the Panzer III and IV by 1940/1941. Thereafter, it was used to great effect as a reconnaissance tank. By the end of 1942 it had been largely removed from front line service and it was used for training and on secondary fronts. Production of the tank itself ceased by 1943 but its chassis remained in use as the basis of several other armored vehicles, chiefly self-propelled artillery and tank destroyers such as the Wespe and Marder II

This kit comes in a shrink-wrapped tray and lid type box. The box are shows a Pz.Kpfw. II Ausf. C in a very pale overall grey with a red 14 outlined in white on the turret sides. There is a thin black German cross outlined in white on the sides of the hull. In the background are very pale (almost ghost-like) illustrations of some Sd,Kfz. 251 German half tracks with figures standing atop of them.

The box art says that modeling skills are helpful if under 10 years of age and the kit is not suitable for children under 3.

One side panel has a profile of a Pz.Kpfw. II Ausf. C in a wither white overall camouflage with a red Roman numeral III followed by a number 14, both outlined in white, on the turret sides. It has a small black German cross outlined in white on the hull sides. This is followed by a one paragraph history of the tank and the statement that the kit was made in Russia.

The other side panel has color box arts of 3 other AFV kits that Alan marketed. 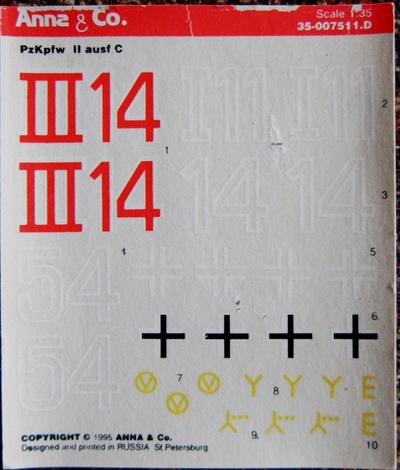 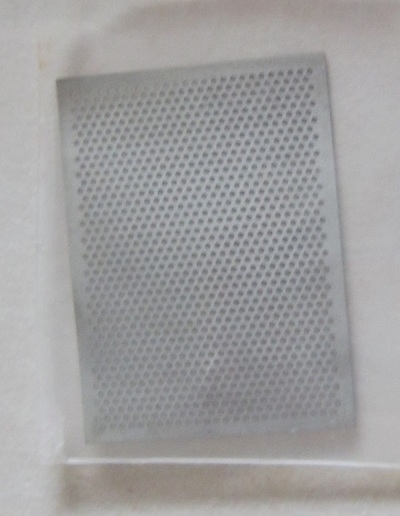 The instructions consist of a single sheet, folded in the middle to create 4 pages in 8 ½” x 12” format.

Page 1 of the instructions begins with a black and white repeat of the box art, followed by the tank’s history in Russian, English and German.

Page 2 and 3 give a grand total of 9 assembly steps.

Page 4 has a single 3-view line-drawing with numbered arrows pointing to where you put your choice of 4 different division markings.

Below these its says “Until 1943 all Wehrmacht tanks were painted standard tank grey. In the winter, grey surfaces were over-painted with white color that was easily washed off”. Six colors are listed and Alan’s P.O. Box address in St. Petersburg Russia is provided. 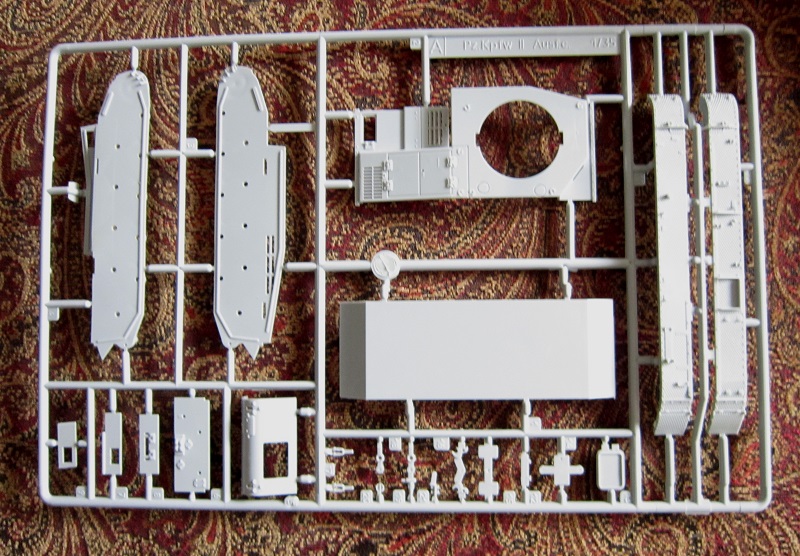 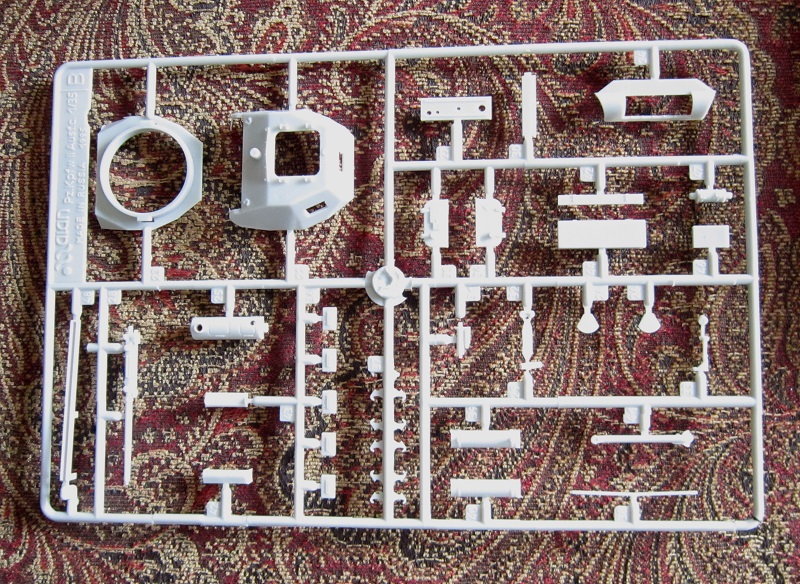 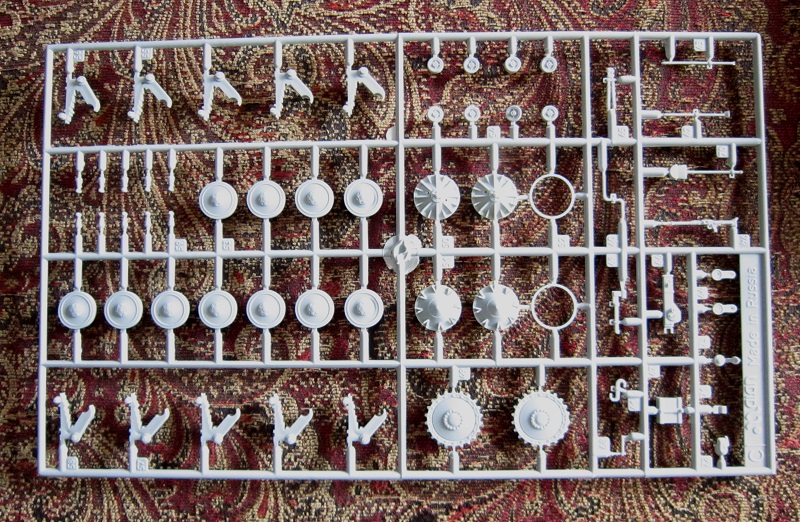 There are 2 identical small medium grey parts trees that are not alphabetized. They hold the individual track links. (62 parts per tree). 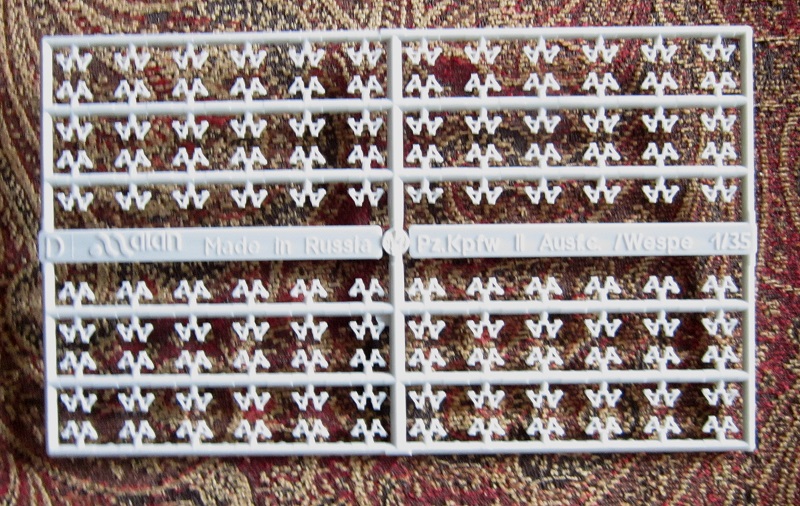 I highly recommend this kit to modelers of average building skills. It is an easy kit for even a beginner. I have several of the old Alan kits in my stash, that I traded the owner of Alan for years ago when we were once pen pals.

I want to thank John Kelley, who made me a gift of this kit.