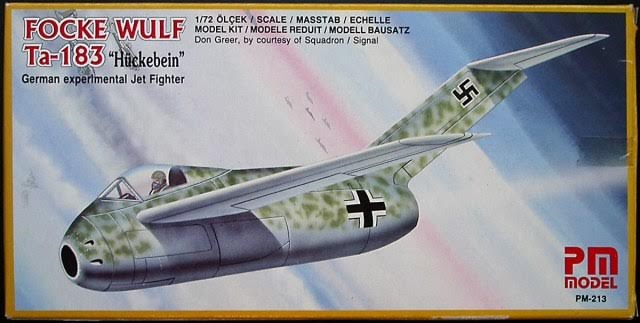 In early January 1945, approval was given by the R.L.M. (German Aircraft Production Authority) to the design concept and an order was placed for eight pre-production aircraft, designated V1 etc. Other sub-types planned were A1, A2 and A3 being photo reconnaisance version carrying a R820-30 camera At east two full size wooden mock-up wind tunnel models were built, one with anhedral, the other with a dihedral tailplane.

It is not known how far production had progressed by the end of the war, but, as les than 8 HeS 011 engines had been flight cleared, it isd unlikely that any Ta-183 reached flight stage.
The Ta-183 drawings and parts fell into Russian hands at the end of the war and the Ta-183 could be said to have finally taken to the air as one of the worlds most significant jet fighters, namely the Mig-15, which demonstrates a direct line of descent from the original Ta-183 design data.

PM Model is a model company based in Turkey.

This kit came in a shrink-wrapped end opening type box. I am no fan of this type of box, because invariably parts of the decal sheet find their way past the end flaps to become lost. Give me a tray and lid box any day of the week.

The box art is repeated on the top and bottom of the box. It shows a Ta-183 above the clouds. There is the silhouettes of 5 bombers way in the background. I assume they are Allied ones.
One side panel says that cement and paint are not included and that the kit is suitable for ages 9 to adult. This is followed by a side view of the box art illustration and PM Model's street address and FAX no. in Istanbul, Turkey.

The other side panel just repeats the address and FAX no.

Huckbein is a reference to a trouble-making raven.
​WHAT'S IN THE BOX:

This kit contains one off-white tree of parts, a clear tree and the decal sheet in a sealed cello bag. The instructions complete the kits contents.

The instructions consist of a single sheet that is printed on both sides. It is 6 1/4" x 12 1/4" format and folded twice along it length to fit the box.

The face side of the instruction sheet  begins with the history and specifications of the Ta-183 in Turkish, English and German. There is a 3-view illustration of the Ta-183 below the histories and a 2 view of a Mig-15.

The Ta-183 is in a wave pattern of brown-violet and dark green above the wings and as a dot-like mottle on the upper fuselage sides. The undercarraige is light grey. It only carries the German crosses and the swastika mark. The Mig-15 is totally bare of any marks.

The other side of the sheet has 3 exploded drawings for assembly. Below them is PM Model's stree address and FAX number in Istanbul, Turkey and PRINTED IN TURKEY.

There is not a parts tree illustration on the instruction sheet. However, there are so few parts it will not be a big chore to find what is needed in the 3 assembly drawings.

The lone off-white tree holds: the wings, landing gear doors and struts, nose wheel (it has tricycle gear), main wheels, cowling, cockpit floor and seat, joy stick, elevators etc. (22 parts)
There is no pilot figure and it will remain to be seen if this model will sit on it's gear without tipping to the tail without any weight added inside the nose. 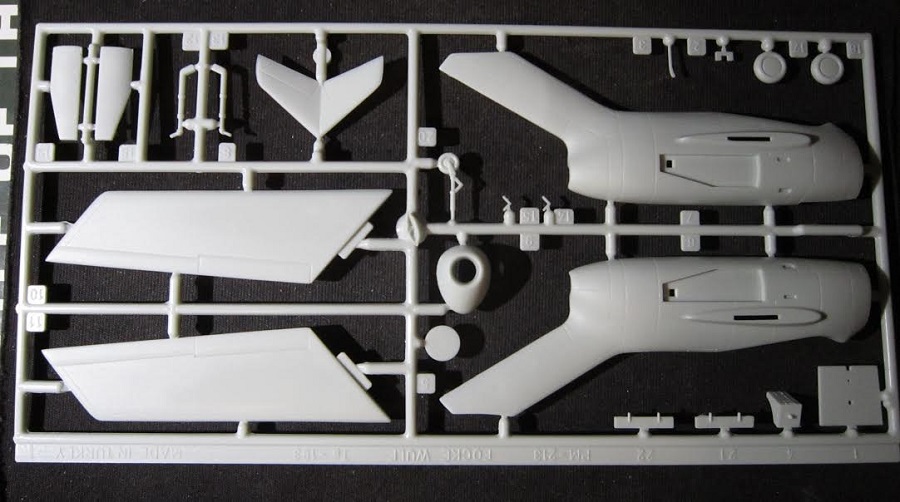 The clear trees is an all one-piece canopy. Surgery would have to be done to pose it open and then the cockpit is pretty nude. 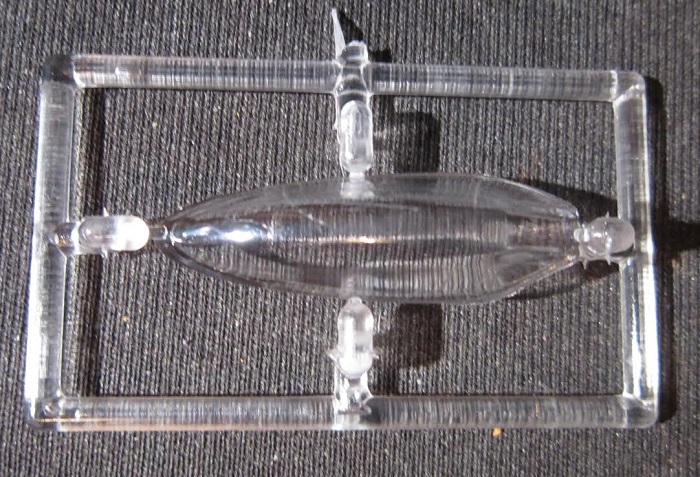 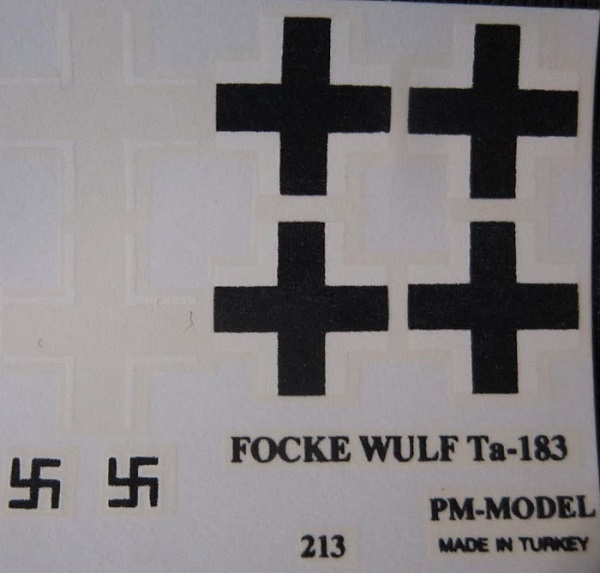 I recommend this kit to novice modelers as it is definitely a fast build
​
I bought my kit back in the 90's at my local hobby shop. I think it is the one...and only...PM kit I have in my stash