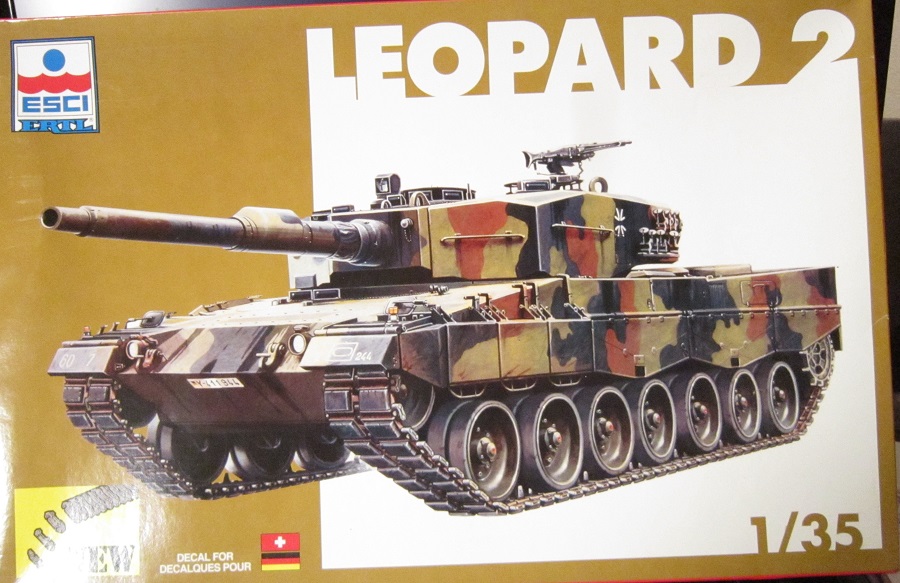 HISTORY:
:In general, the Leopard 2 was built to the same design as the previous Leopard I, but it is slightly bigger and had a larger turret with more sophisticated fire-control equipment. It was also fitted with a more powerful engine.

The Leopard 2 was carefully evaluated, and it was concluded that it was too expensive, the fire-control equipment was too involved, and the armor protection inadequate. It was therefore supplanted with the Leopard 2A version. It was more combat-worthy than the Leopard 2. The principal changes involved the turret. By replacing the optical range-finding apparatus with a laser range finder, it has been possible to give the turret a better shape. A U.S. manufactured Hughes fire-control system that was evaluated for the 2A series included a thermal-imaging night vision system and a television target-tracking camera.

The Leopard 2 was an offshoot of a cancelled joint development between the USA and West Germany in the late 1960’s. The project being the MBT-70. The West Germans continued the project, however. The first production vehicles were delivered in 1977 and exports were soon equipping the Dutch Army. The Leopard 2 has a NBC (nuclear-biological-chemical) defense system and has amphibious capability. It’s fire system is unusual in that the cartridge cases are combustible. When the shell is fired, all that remains is the base of the cartridge, which frees up extra space. It has a 30% better power-to-weight ratio than the Leopard 1 did. This resulted in increased cross-country mobility and thus better survivability too.

Ertl is a company based in Dyresville, Iowa. They are most noted for production of farm equipment toy replicas and have been in that business since 1945. In the late 1980’s till about the middle of the 1990’s, Ertl sold Esci models kits under their label. Esci was an Italian model company that has gone out of business. Ertl no longer makes armor or aircraft kits in plastic, only their AMT line is still active producing model car kits. The pressing of their plastic models has also been moved to Mexico.

This kit is a close representative of the Leopard 2A-3 out of the box (I am told). The kit came in a shrink-wrapped  tray and lid type box. The box art shows a Leopard 2 in West German marks and a 3-color wave pattern camouflage of black, dark green and tan. On the front of the right fender is the white letter numbers 60 7. There is a white license plate with the black numbers Y-411994 on it, with a small German flag to the left of the numbers. The left fender has white rectangle with an oval inside it, flanked on the left by the white number 2 and on the right with the white numbers 244. Modern German black crosses with white outlines adorn the turret sides. This illustration of the tank is posed against a plain background of orange and white that divides the box’s length. There is a small illustration of the link and length type tracks in the kit in one corner and mention that there are decals for West German and Swiss vehicles provided in the kit.

Side panels say that the kit is not advised for kids under 10 and that it contains small parts that could be a hazard to them and the kit does not include paint or cement. This is repeated in 6 languages, including English.

Inside the kit there are 3 large light tan parts trees. 1 medium sized tan tree and an off-white tree. All are in individual sealed cello bags.

The instructions consist of a single sheet that accordion-folds out into 8 pages in 8 ½” x 11” format.

Page one begins with a very inky black copy of the box art, followed by the history of the Leopard 2 in the same 6 languages as the box side panels.

Page two begins with general warnings about the kit, again in the same 6 languages. This is followed by a listing of Humbrol brand paints suggested to use to finish the model. The bottom of the page has decal application instructions.

Page 8 has a 5-view marking and painting illustration for a West German tank in the wave pattern of tan, black and dark green. The decal sheet offers the scheme shown on the bo xart, already described above. However, this scheme also has a coat of arms that goes on one side of the rear of the turret. The license plate number is repeated on the back of the tank.

This same camouflage can be marked on another West German tank that has a yellow triangle with 3 vertical bars inside it that goes on both sides of the rear of the turret, a white outlined number 325 that goes on the center of the side of the turret, a white circle with the number 60 inside it on the right front fender, a white license plate with the number Y-533718 in black letters on it, with the little German flag to the left of the lettering again. It has the white triangle on the left fender with the white oval inside it and the number 3 in white to the left of it and white 363 on the right. The license plate is repeated on the back of the tank.

A third scheme can be done for a Swiss tank. However, it is very vague as to  what color the Swiss one should be. No units are mentioned for the W. German two or the Swiss one either.

On the decal sheet is an area marked as group C. I think these are meant for a Swiss Leopard 2 in perhaps the same camouflage. As said, we are not really told much. A black license plate with a small white Swiss cross and the number M-0810 in white on it goes on the left side of the rear of the tank and a repeat of it goes on the bow. There is white square outlined in black that has the black letters DL above L2 on it. This mark goes on the right side of the rear and on the left front fender.

There are no parts illustrations in the instructions. However, the trees are alphabetized and part numbers are molded next to the parts on them. You will have to identify things from the parts drawings then, rather than having parts tree drawings to refer to. 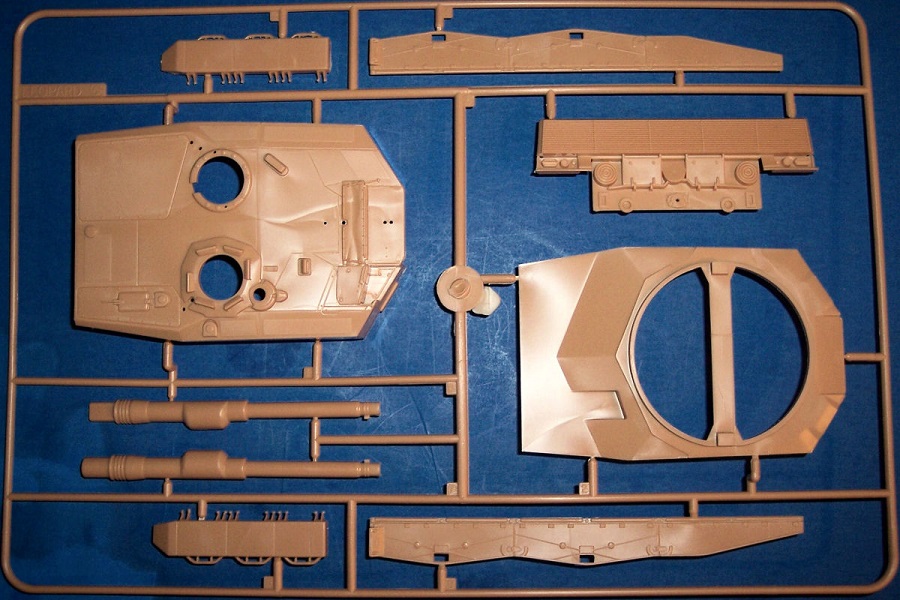 Medium sized off white letter B tree holds the link and length type tracks.(39 parts) Some flash is present on the sprue, but not on the parts themselves. 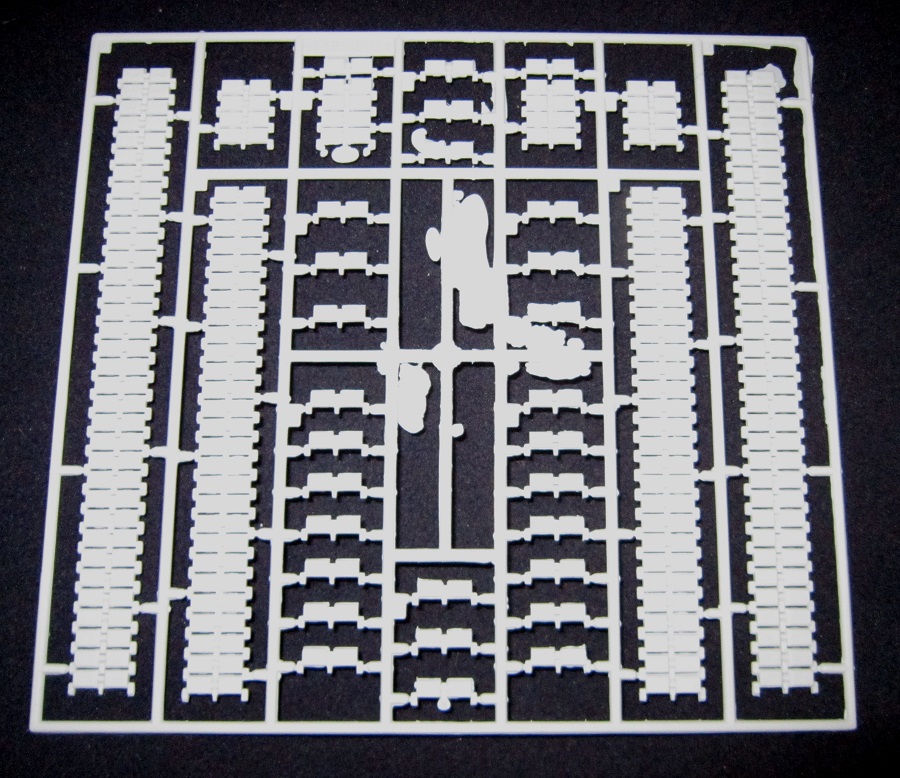 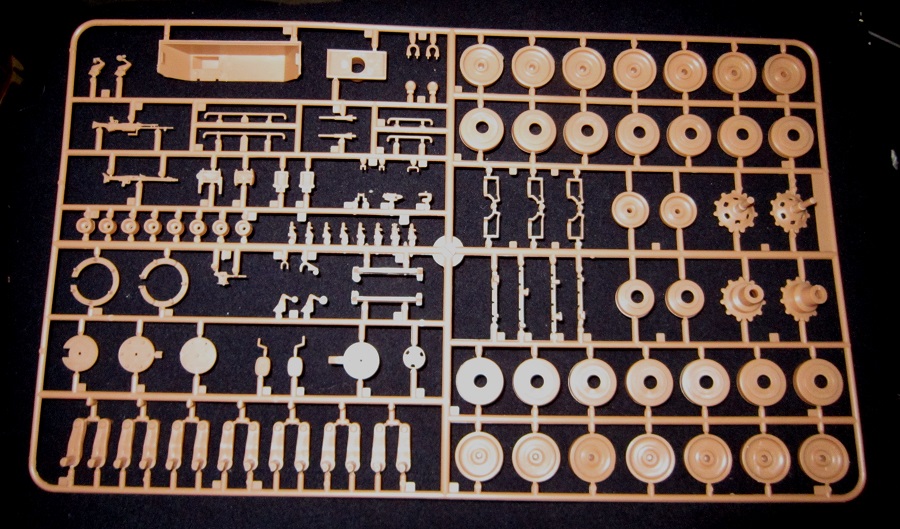 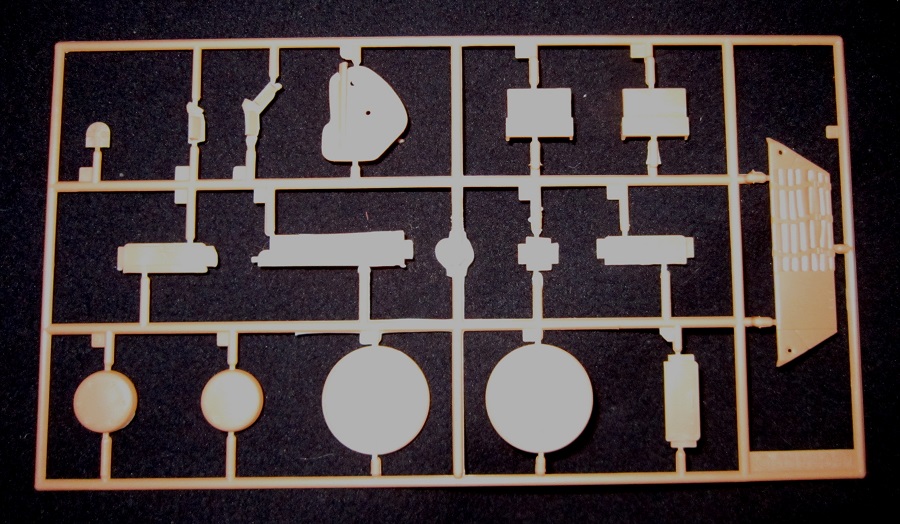 Large light tan letter E parts tree holds the hull top, bottom and side pieces and smoke launcher barrels. (32 parts) There are 6 each of parts numbers 5E and 6E on this tree, that are nowhere to be seen on the instructions and will therefore be excess. 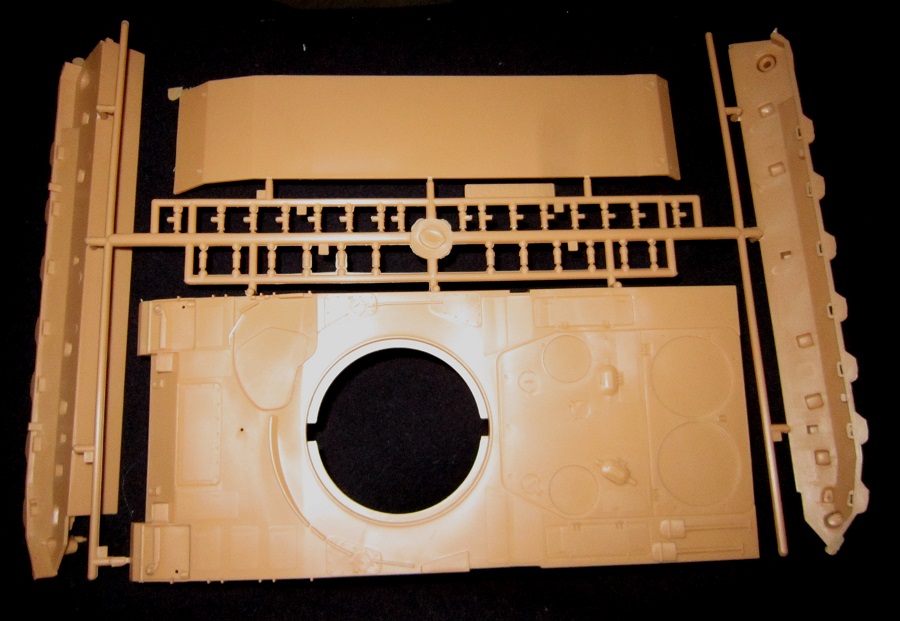 The decal sheet, already described above completes the kit’s contents.

There are no crew figures or clear parts for telescope of headlight lenses included in the kit. Although some hatches can be posed open, there are no interior details either.

I bought this kit years ago at the Ertl factory discount store in Dyresville, IA.