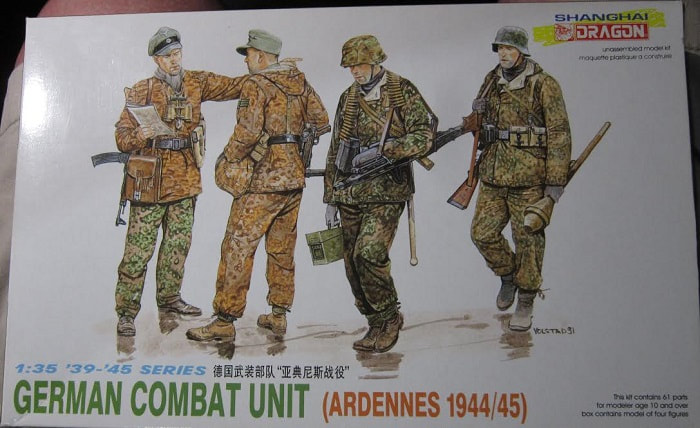 DML Dragon is a prolific model company based in Hong Kong, China. However, a few of their kits came from Shanghai - like this one. They manufacture all manner of model subjects in the popular scales.

The box art shows 3 German infantrymen and an officer. They are all dressed in camouflaged uniforms in no less than 4 different camouflage patterns.

The officer is wearing a field grey officer's hat. He is armed with a MP44, has a pair of binoculars around his neck, is pointing with his left arm and reading a map. He has a P.38 pistol in holster on his belt with a large leather case.

He is talking to a infantryman that wears a field grey soft cap. He has his camouflaged steel helmet in his left hand and is armed with a MP40. He has a ammo pouch on his belt and a potato masher type grenade tucked into it. His hooded jacket appears to be white in reverse.

The next infantryman wears a camouflage covered steel helmet. His jacket has a white reverse side also. He has a ammo belt strung around his neck for the MG42 machine gun he is armed with. He carries a ammo case for it in his right hand. He has a cantten, shovel in pouch and ammo case on his belt.

The fourth figure wears a bare steel helmet. His jacket reverses to white also. He has a panzefaust in his left hand and a 98K carbine slung over his right shoulder. He has ammo cases for the 98K on his belt, with a ammo case and canteen.

All 4 figures have their pants bloused into putties above low shoes.

One corner of the box art says the kit contains 61 parts and is designed for modelers over the age of 10.

​This is followed by the statement that the kit is unsuitable for children under 3 due to small parts and that the kit is designed for modelers over 10 years of age, in multiple languages including English.

The other side panel says that the kit contains parts for four figures and that glue and paint are not included, in 6 languages labeled with color illustrations of the flags of the countries that speak these languages. This is followed by DML's Shanghai Office street address, telephone and FAX numbers in Shanghai, China, the copyright date of 1997 and MADE IN CHINA.

The bottom of the box serves as the assembly and painting instructions. There is a 2-view full color illustration of each of the 4 figures in the kit, showing their front and back. Included is small patchs showing the patterns of 4 different camoufages.
​
Below them there are 6 black and white line drawings of: a P.38 holster, a MF34 accessory case, a M35 dispatch case, a G43 ammo pouch, a MP40 ammo pouch and a MP44 ammo pouch.
All illustrations on the box are by DML's resident artist Ron Volstad. 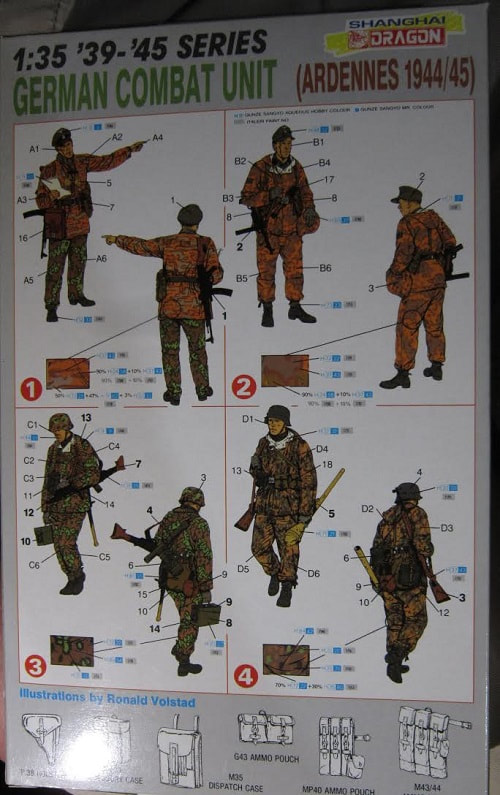 This kit contains 2 light-grey trees of parts. Neither tree is alphabetized.

The large light-grey tree holds the parts of the figures (divided into seperate heads, torsos, arms and legs), 2 canteens, ammo cases for the MP40 and MP44, an officer's hat, a soft field cap, 3 steel helmets, a pair of binoculars, 2 gas mask canisters, 2 canvas bags, a pistol in its holster, a potato masher type grenade, a small shovel in its pouch etc. (47 parts) 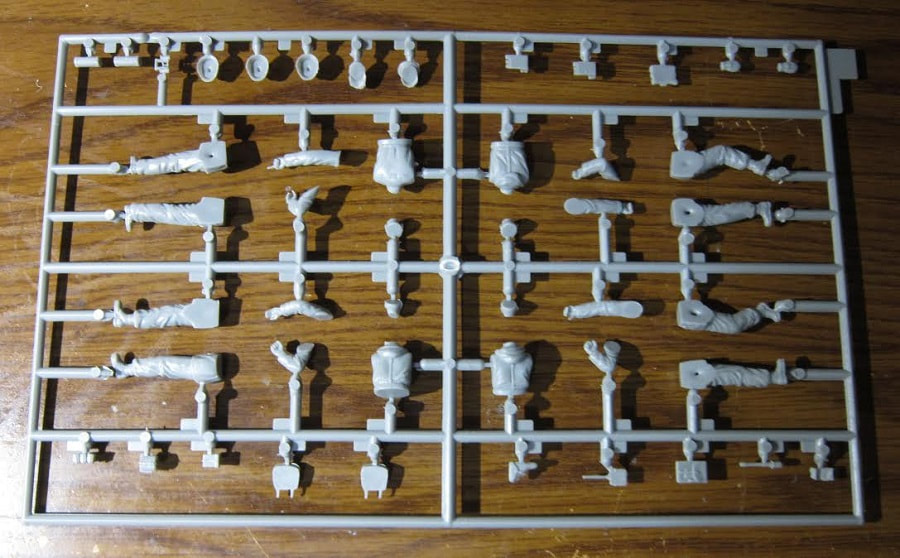 Nice detail and equipment. However, rather ho-hum poses. 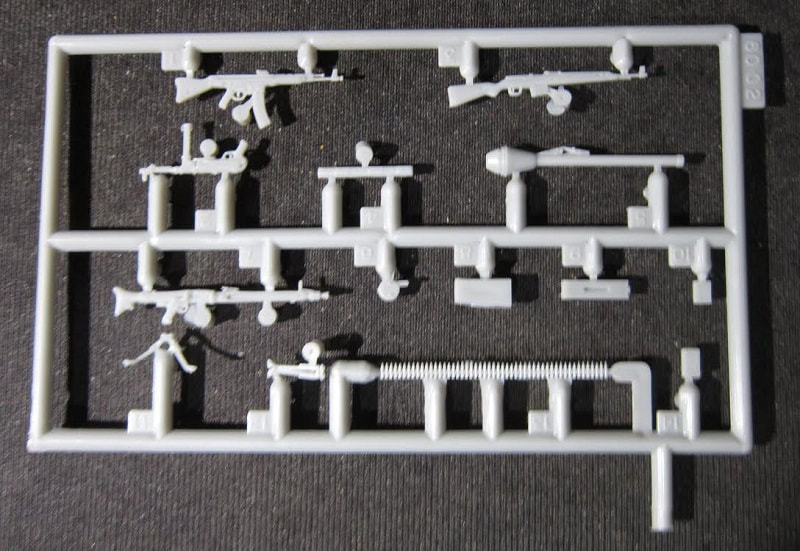