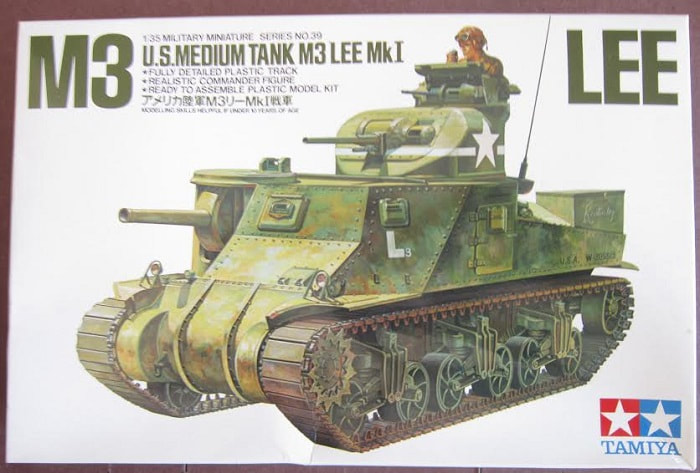 Under impetus from the activity of German tank divisions at the intial stage of WWII, Major general Adna R. Chaffee, Chief of the Armoured Force, met Major General Charles M. Wilson, Chief of Ordnance of the Department of the Army, on 28th August 1940 in a conferance room of Aberdeen Proving Ground, Maryland, for a conference on a development plan for main-strength tanks to be used by the newly organized armoured army consisting of one armoured corps, two armoured divisions and one seperate tank battalion under the direct control of the army and also by existing armoured divisions which were to be reinforced and sent to the European theatre of the war.

The U.S. Army planned to supply the armoured forces organized on 15th July 1940 with the M2A4 light tank carrying a 37 mm tank gun M5 (53.5 calibres long) which had grown from the T2 pilot light tank series designed and developed by Rock Island Arsenal in Illinois -- the only specialized tank factory in the United States of those days and also with the M2A1 medium tank having a 37 mm tank gun M6 (53.5 calibres long) on the new turret.
M2A4 light tanks and M2A1 medium tanks were to be produced at a ratio of three to one in number. The first order for M2A's was placed with American Car & Foundry in Berwitz, Pennsylvania.

Orders for them also went to Baldwin Locomotive Co. and Pullman Standard Car Co. An order for M2A1's was given to car-maker Chrysler Corporation. These manufacturers were to produce a total of 9,200 tanks by August 1942. In armament, the M2A4 light tank and the M2A1 medium tank were no match for the Pz.Kpfw. III Ausf. E with a 50 mm tank gun model 39 (42 calibres long) and the Pz.Kpfw. IV with a 75 mm short-barrelled tank gun model 37 (24 calires long) which both formed the main strength of the most powerful German Panzer divisions.

It was therefore concluded that the U.S. armoured forces needed a new medium tank able to attack the German tanks from out of their range. According to the requirements outlines, the new medium tank was to have weight (equipped) of about 30 tons, armour thickness of 39 mm to 75 mm, muzzle velocity of 600 metres per second and effective range of about 3,000 metres.

The new medium tank was to be designed and trial manufactured by Chrysler under the leadership of Rock Island Arsenal, but tank engineers knew from experience that it was impossible to complete in a short period the medium tank required by the commanders of the U.S. armoured forces. Therefore,

another tank was made instead on the basis of the T5E2 pilot medium tank having on the frontal right sponson a 75 mm pack howitzer M1 (15.93 calibres long) which the 7th Seperate Cavalry Brigade (mechanized) had been requiring and trial-manufacturing for their fire support since 1938 and in the light of the French B1 heavy tank equipped with a 75 mm tank gun, the body being designed by Rock Island Arsenal, the 75 mm  tank gun by Watervliet Arsenal and the cast revolving turret for the 37 mm tank gun by Aberdeen Proving Ground.

Chrysler Corperation, which had received a contract for the M2A1 medium tank, was now ordered to produce the new tank. After carefully studying the Ordnance Department's  requirements in a Detroit Arsenal office on high street in Detroit, Michigan, Chrysler engineers started preparing for the production of the new medium tank in August 1940. They started in January 1941 to trial-manufacture two new medium tanks which needed about 6,000 drawings and consisted of about 26,000 main parts and completed them on 11th April of that year. These prototypes were entirely different in shape froim existing standard tanks.

The prototypes equipped with such strong armament were designated M3 medium tank. Putting confidence in the M3 officers and men of the armoured forces called it "Moving Fortress" after the example of the great Boeing B-17 super-heavy bomber "Flying Fortress".

The M3 medium tank was also called "General Lee" after Robert Edward Lee, resourcful General. Robert Edward Leet was commander in chief of the Confederate army in the Civil War who obtained renown by pertinent command. Although he lost the war, he became president of Washington College and established his fame also as an educator. He has been idolized by people in the souther states.

In August 1941, the first production plan for 2,200 M3 medium tanks was put into action by Chrysler Detroit Arsenal.

In October 1941, the Lee Mk. I was supplied for the first time to the 69th Armoured Regiment of the 1st Armoured Division, the 67th Armoured Regiment of the 2nd Armoured Division and the 70th Seperate Tank Batallion. At the Second Battle of El Alamein in October 1942, the British 8th Army used 250 Lee Mk I's. In the Pacific theatre of the war, the 193rd Tank Battalion of the U.S. 8th Army first used the medium tank at about the same time for counter-offensive operations against the Japanese in the Solomon Islands.

In December 1942, a U.S. division equipped with the Lee Mk. I made a full-scale tank-to-tank fighting in Tebouba, Tunisia. The 2nd Batallion, 13th Armoured Regiment, Armoured Combat Group B, 1st Armoured Division under the command of Brigadier General Paul A. Robinett made a two-week fighting with the German 10th Tank Division supported by the 501st Tiger Heavy Tank Detachment and lost 54 out of its 60 Lee Mk. I's.

By inflicting serious damage also on the German tanks of the 10th Tank Division and checking the advance of the enemy. However, the Lee Mk. I's turned the timed of subsequent operations in favour of the Americans and prepared the ground for their victory in the Battle of Tunisia.

In April 1943 the General Lee was reclassified from "standard" to "limite standard" and in April 1944, was declared obsolete and struck off the equipment list. The General Lee completed production in a short period of only about eight months, which was without precedent in the development history of main-strength tanks.

The box art shows a M3 Lee posed against one of Tamiya's signature all white backgrounds that they used for the majority of their box arts.

One side panel repeats the box art in color smaller, followed by the history of the M3 in Japanese.

The other side panel shows the box arts of 4 other AFV kits that Tamiya manufactures: a M3A3E8 Sherman U.S. Tank, a M42 Duster U.S. AA Tank, a M41 Walker Bulldog U.S. Tank and a M3 Jackson U.S. Tank. No kit numbers for these is provided.

The instructions consist of a single sheet that accordion-folds out into 6 pages in 7 1/2" x 11" page format.

Page 1 begins with a black and white repeat of the box art, over the history of the M3 Lee and small black and white illustrations of a M2A1 and two versions of the Pz.Kpfw. IV.

Page 3 has the painting and decal application instructions down the left side of it and a 4-view and a 3-view of schemes down the right side of the page.

The 4-view is the tank no. 3 of F Company of 2nd Battalion of 13th Armoured Regiment of 1st Armoured Division, 1942. It is the box art scheme, but further shows the nickname in white cursic lettering of "Kentucky" on the rear end of the sides of the hull, above the serial no. U.S.A. W-309513. It also has an American flag on the nose.

The 3-view is the tank no. 4 of D Company of the 2nd Battalion of the 67th Armoured Regiment of the 2nd Armoured Division, 1942.

It is overall olive-drab with star insignia's on it that look exactly like the ones used on U.S. aircraft. Blue circles with white stars with a red ball in the center of them. these are on the hull sides and rear and the hull nose. On the sides of the turret is a white D-10 repeated on the right of the nose too.
​Page 4 has READ BEFORE ASSEMBLY instructions down the left side of the page.

From the right side of page 4 to page 6 there are a total of 11 assembly steps. 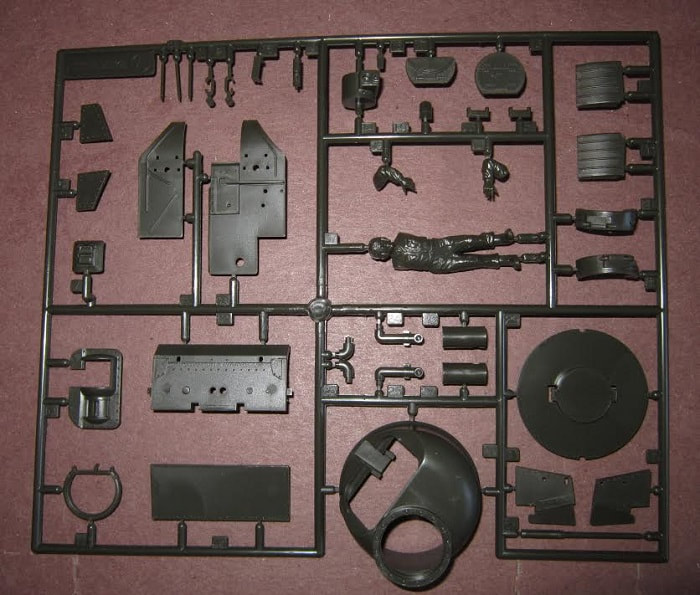 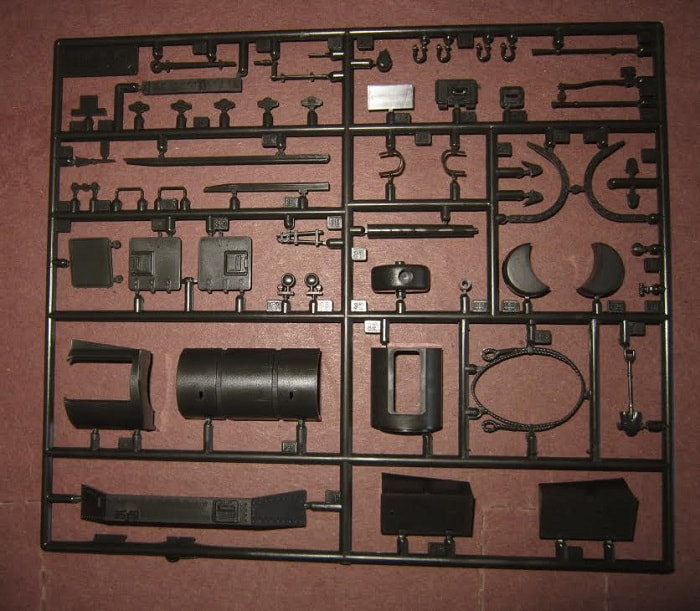 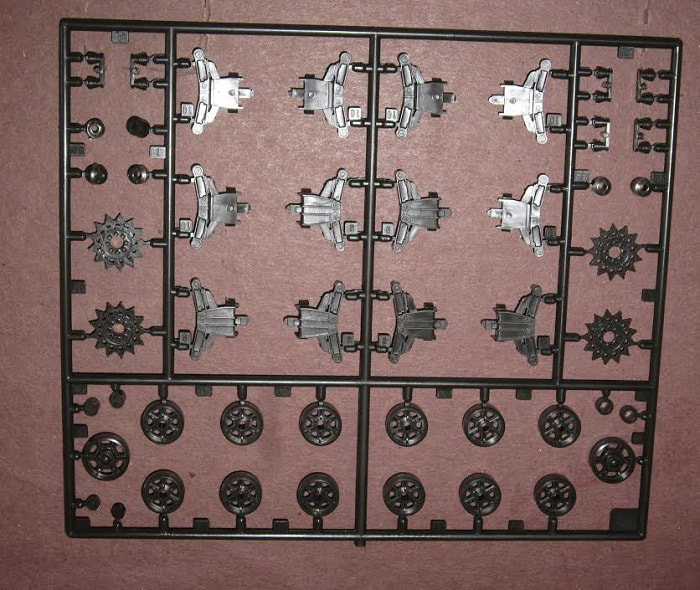 ​Next is the loose olive-drab hull tub and hull roof parts. 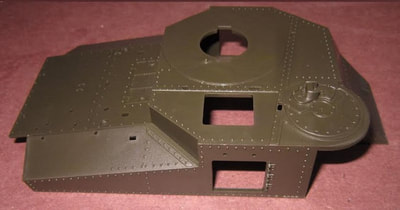 ​The two lengths of black vinyl treads and the decal sheet complete the kits contents. 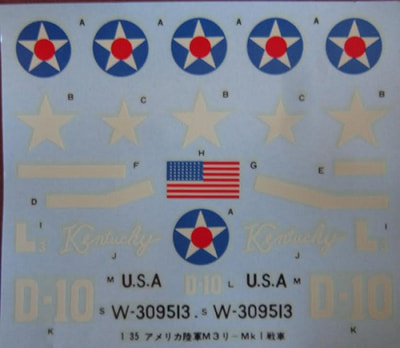 This is a nicely detailed model externally. There is no interior details
however or any clear parts.

Part trees are not illustrated in the instructions.

​I purchased this kit years ago at my local hobby shop.