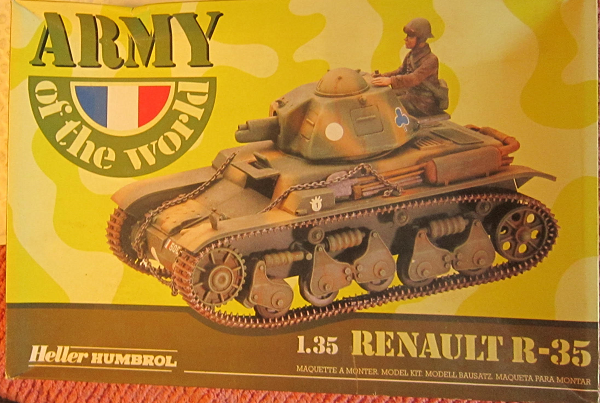 Army of the World Series
Kit no. 8133
By Ray Mehlberger

MSRP:  OUT OF PRODUCTION

The Renault R35, an abbreviation of Char léger Modèle 1935 R or R 35, was a French light infantry tank of the Second World War.

Designed from 1933 and produced from 1936, the type was intended as a light infantry support tank, equipping autonomous tank battalions, that would be allocated to individual infantry divisions to assist them in executing offensive operations.

To this end it was relatively well-armoured but slow and lacking a good antitank-capacity, fitted with a short 37 mm gun. At the outbreak of the war, the antitank-role was more emphasized leading to the development and eventual production from April 1940 of a subtype with a more powerful longer gun, the Renault R40.

It was planned to shift new production capacity to the manufacture of other, faster, types, but due to the defeat of France the R35/40 remained the most numerous French tank of the war, about 1685 vehicles having been produced by June 1940.

At that moment it had also been exported to Poland, Romania, Turkey and Yugoslavia. For the remainder of the war Germany and its allies would use captured vehicles, some of them rebuilt into tank destroyers.

Heller-Humbrol was a prolific old model company based in Paris, France. They made all manner of model subjects in the popular scales. They went out of business.

This kit came in a shrink-wrapped tray and lid type blousy box. It is 3" too long and 2" too wide, creating a letter "L" void around the parts inside.

The box art shows a color photo of the model made up. It is in a wave pattern of sand-yellow and green, with a white circle and a blue 3-pedaled shamrock outlined in white on the sides of the turret and a white exploding grenade symbol with 1 on it on the sides of the hull.

There is a French tricolor flag on the bow with a white number 500 46.

One side panel has a small color profile of the box art scheme and a R-35 that is overall khaki with a white triangle with a black ace-of-spades on it on the turret sides. It has a white exploding grenade symbol with a dark unrecognizable symbol on it on the sides of the hull and a white 50123 over the tricolor French flag on the left side of the rear of the hull.

This kit contains 4 dark-green trees, black vinyl treads and tow cable and a length of brass metal chain in a sealed clear cello bag, the decal sheet and the instructions.

Page 1 of the instructions begins with a line-drawing side view of the R-35 over specifications of the tank in 8 languages, including English.

Page 2 is the painting and marking instructions with two 5-views:

Page 3 through 8 give a total of 15 assembly steps.

Page 10 has more general comments about the kit in 6 languages, including English.

The parts trees are not alphabetized or illustrated in the instructions. They do have part number tabs next to the parts on them however. 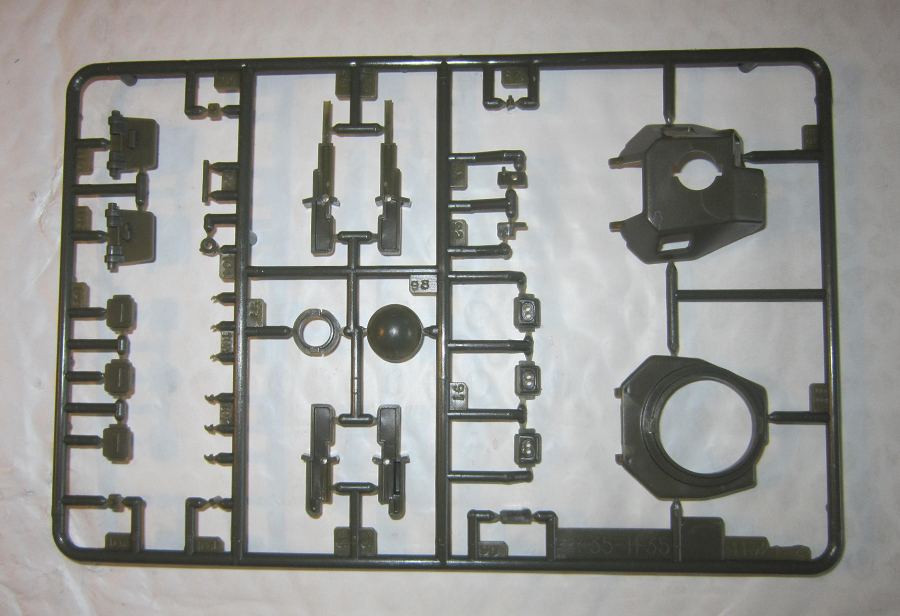 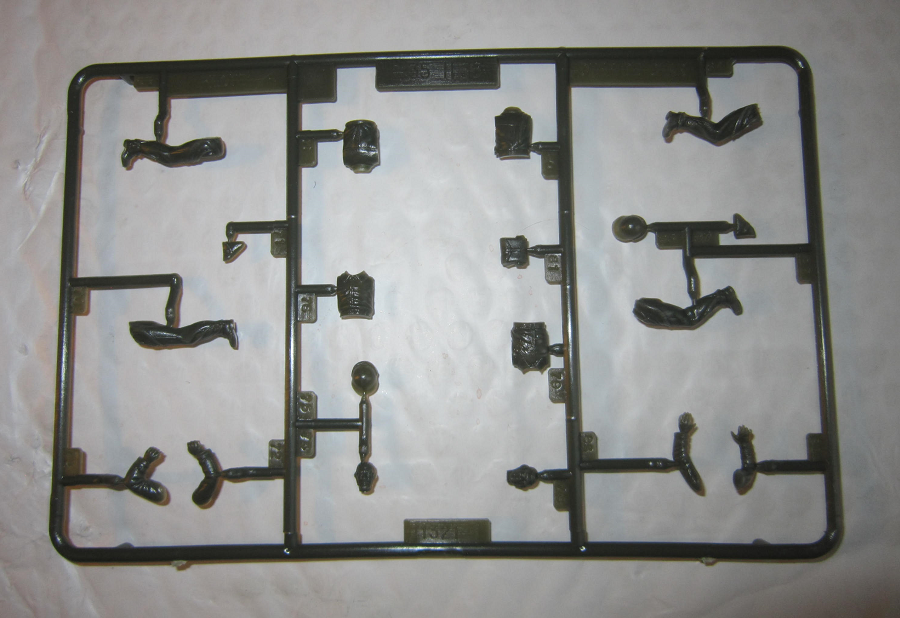 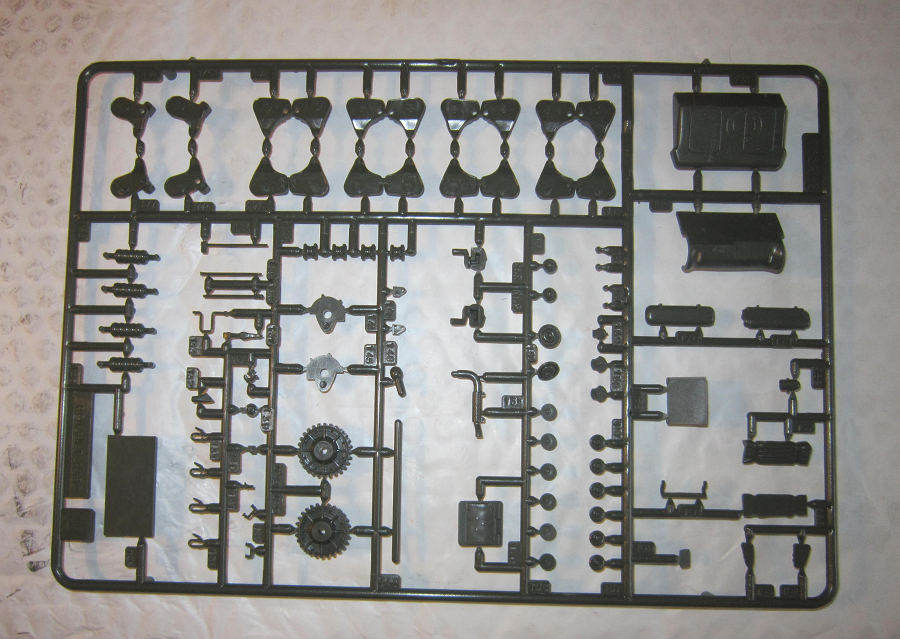 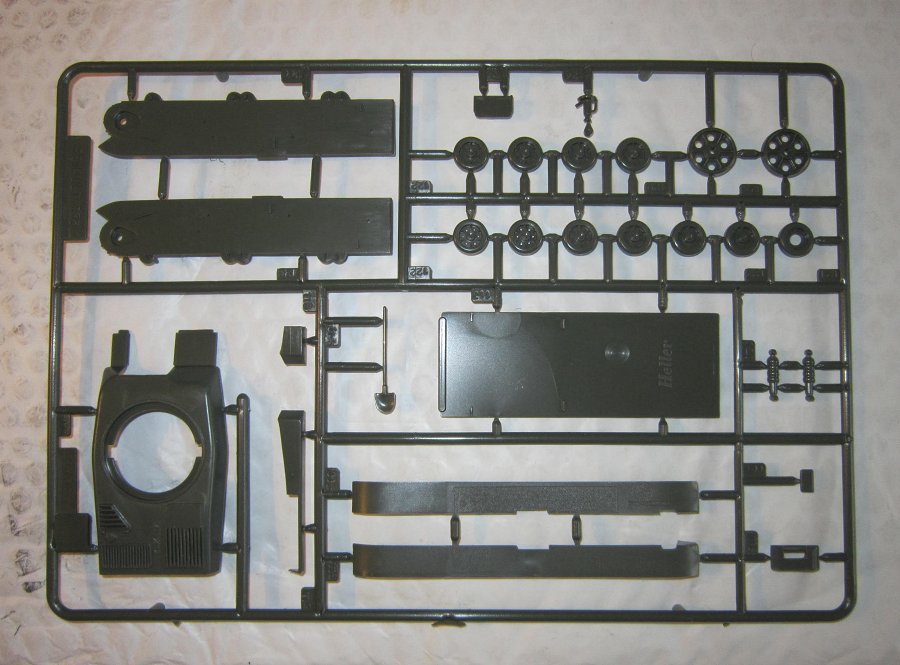 ​The decal sheet has a tissue to protect its face. It and the length of brass metal chain complete the kits contents. 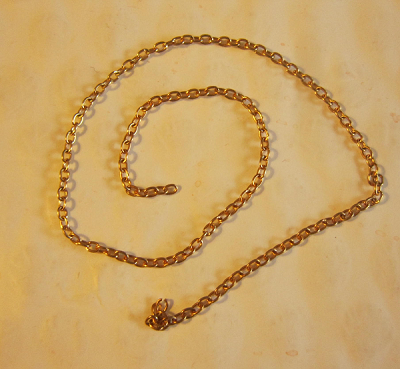 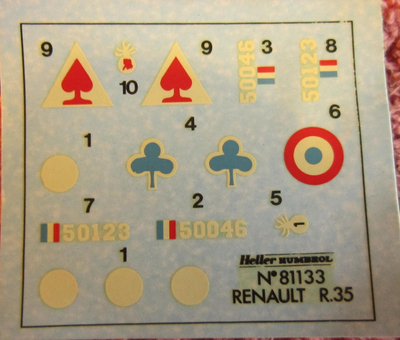