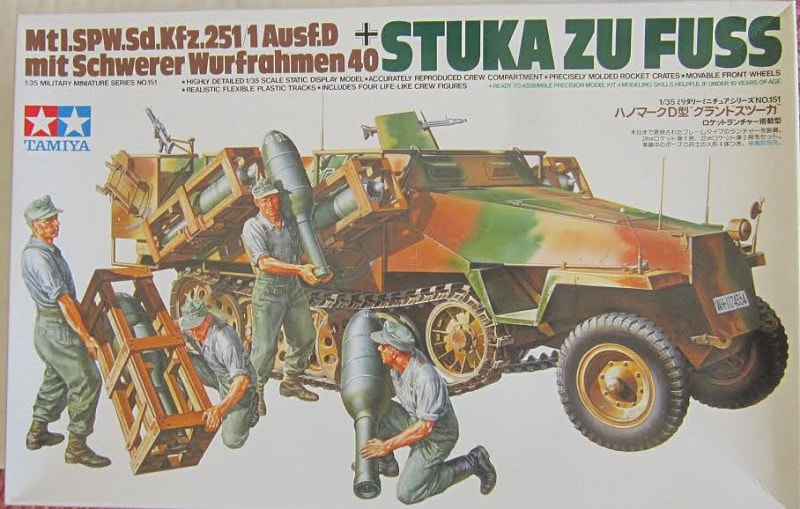 However, it is available at no less than 13 places overseas.
​HISTORY:

It was shortly after the invasion of Russia in 1941, that the German Wehrmacht began to seriously consider a necessity of increasing firepower in their motorized infantry formations. By applying some simple modifications to the Sd.Kfz. 251 infantry half-track, they partially fulfilled this requirement.

One of these variants was designated the "Sd.Kfz. 251/1 mit Wurfrahmen" (the Sd.Kfz. 251/1 with launching frames). It was adapted for six. externally mounted frames housing short-range rockets of 28cm and 32cm size.

The wooden or metal rocket containers were used as shipping crates during transport, and were attached to base plates on the sides of the vehicle for firing.
Aiming direction was provided by pointing the vehicle at the target. Two rods were attached on the front of the engine hood to help the driver align the vehicle on the target.

Elevation was adjusted by changing the angle of the container mounting plate. The rockets were fired electrically from inside the vehicle. With an effective range of more than 2000 meters, the rockets provided the German infantrymen withe effective fire support against close in area targets.

This highly effective half-track was affectionately called the "Stuka Zu Fuss", or Stuka on Foot, taken from the German Ju-87 series of dive bombing aircraft.
​THE KIT:

The box art shows the half-track and crew posed against one of Tamiya's signature all-white backgrounds that they use for the majority of their kit's box arts
.
The half-track is in a wave pattern of sand-yellow, red-brown and dark-green, with a white license plate on the front bumper with black serial no. WH-1724954 on it.

Four crewmen are loading the rocket rounds. They all wear blue shirts with the sleeves rolled up and field gray pants bloused over their shoes and field gray cloth field caps.

There are two of the rocket filled crates mounted on the side of the half-track.

One side panel has a color 3-view illustration of the half-track in the 3 color box art scheme. It has a black 536 on the sides and rear of the hull with a narrow German cross,  on each of the fenders on the rear there is a  white license plate with Black serial no. WH-1747254 on it and also one on the nose of the half-track.

​The other side-panel has 2 color profiles of the half-track:

1. In 3 color wave pattern with mostly washes of winter white-wash and a red 822 outlined in white on the sides of the hull.

A paragraph in Japanese is between these 2 illustrations and Tamiya's address in Shizuoka City, Japan is shown.

No clear parts are included and parts fit the box tight in all 4 directions.

Page 1 begins with a black and white photo of the model made up with the 3 color wave pattern scheme. licese no. WH-1724954 and white "Gretl" on sides of the hood, over the history of the half-track in 4 languages, including English.

Page 2 begins with READ BEFORE ASSEMBLY instructions, tools and paint colors suggested and a list of parts that are excess in the kit and not needed to complete the model. However, there are no parts trees illustrations in the instructions. This is in multiple languages, including English, over the first 2 assembly steps.

Page 3 through 9 give a balance of a total of 19 assembly steps.

Step 19 includes the assembly instructions for the 4 crew figures and what colors to paint them.

Page 10 is the painting and marking instructions for the half-track. It shows a 4-view of the scheme with "Gretl" on it (already described above) and decal application instructions. PRINTED IN JAPAN. 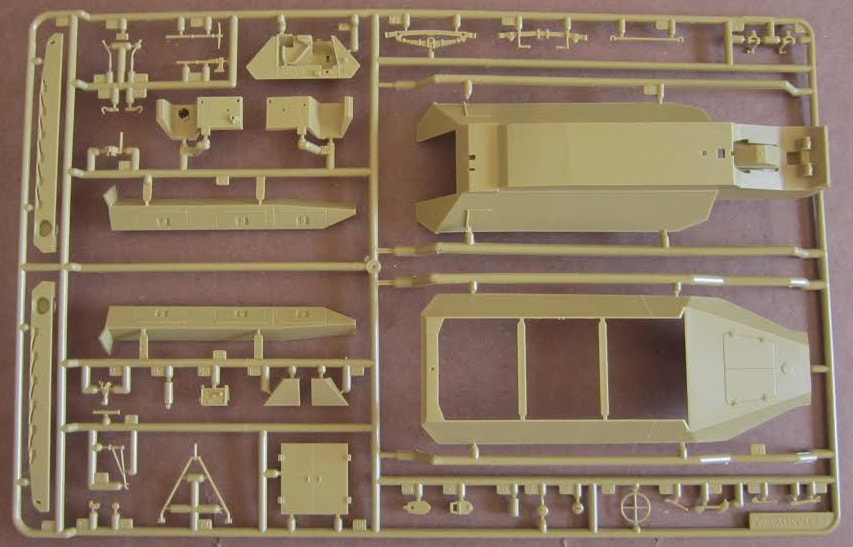 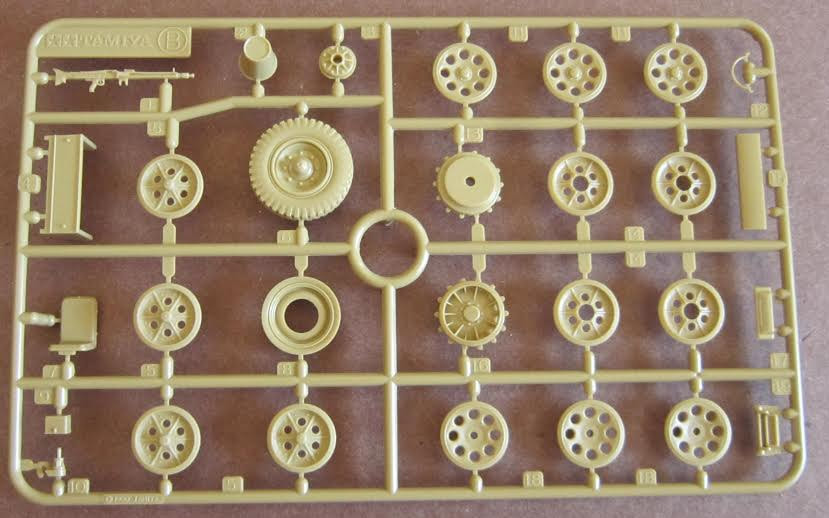 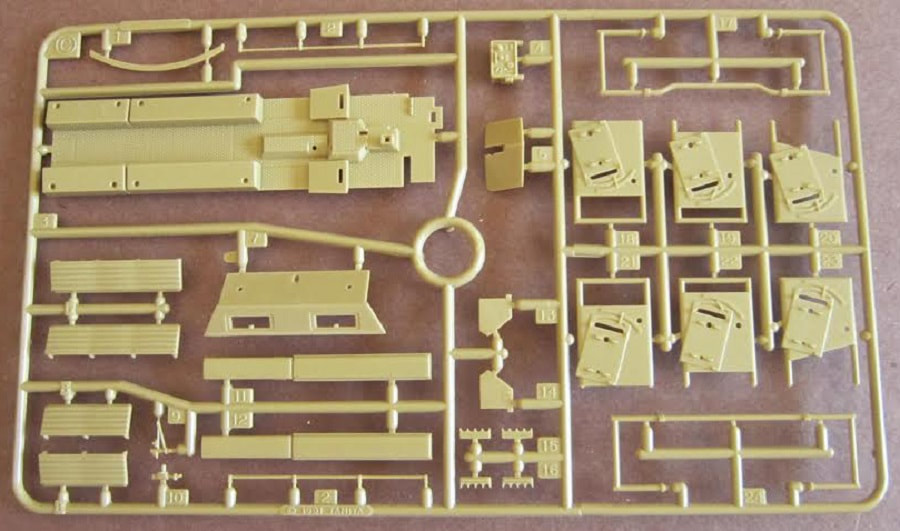 ​There are 2 identical medium-sized light-tan letter C trees. They hold: rockets and their wood crates, figures etc. (52 parts each) One part is excess. 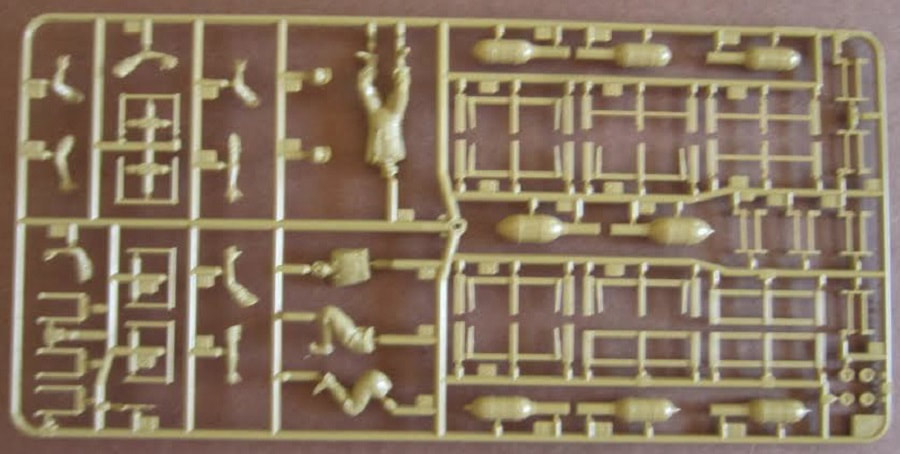 ​Next is the two runs of black vinyl rubber-band type treads. 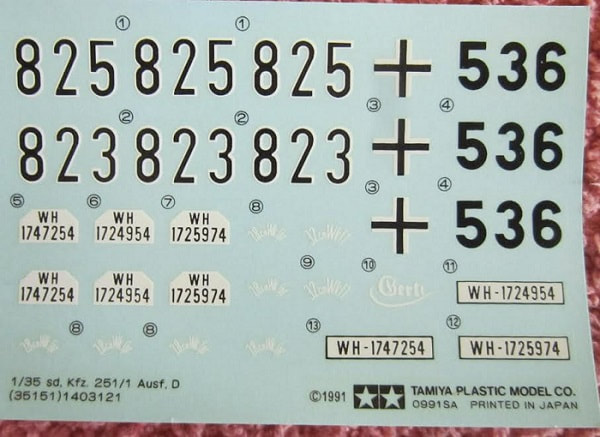 ​There are no clear parts included in the kit.