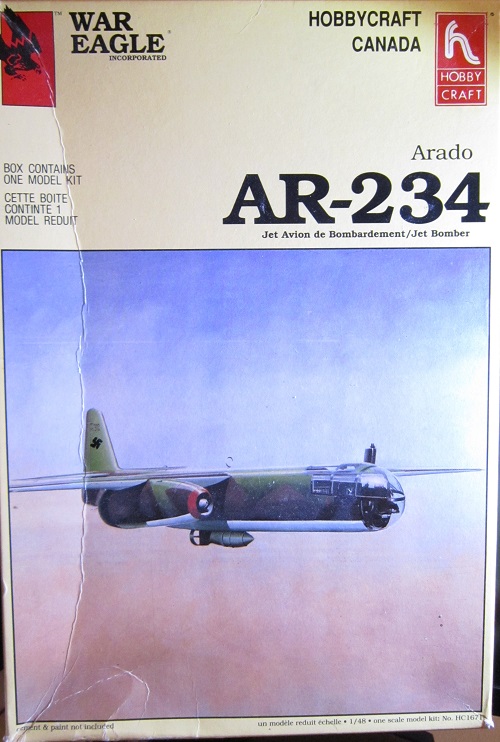 The Arado Ar 234 “Blitz” (Lightning) was the world’s first operational jet powered bomber. It was built by the Arado company in the closing stages of WWII. In the field, it was used almost entirely in the reconnaissance role, but in its few uses as a bomber it proved to be nearly impossible to intercept.

In the autumn of 1940, the RLM offered a tender for a jet-powered high-speed reconnaissance aircraft with a range of 2,156 km (1,340 miles). Arado was the only company to respond, offering their E.370 project, led by Professor Walter Blume. This was a high-winged conventional-looking design with a Junkers Jumo 004 engine under each wing. The projected weight for the aircraft was approximately 8,000 kg (17,600 lb). In order to reduce the weight of the aircraft and maximize the internal fuel, Arado deleted the typical integrated landing gear and the aircraft was to take off from a wheeled-trolley and land on retractable skids.

Arado estimated a maximum speed of 780 km/h at 6,000 m (485 mph at 19,700 ft), an operating altitude of 11,000 m (16,100 ft) and a range of 1,995 km (1,240 miles). The range was short of the RLM request, but they liked the design and ordered two prototypes as the Ar 234. These were largely complete before the end of 1941, but the Jumo 004 engines were not ready, and would not be ready until February 1943. When they did arrive, they were only cleared for static and taxi tests, considered unreliable by Junkers to be used for in-flight use. Flight-qualified engines were finally delivered that spring, and the Ar 234V-1 made it’s first flight on June 15, 1943. By September, four prototypes were flying. Of what ended up being eight prototype aircraft to be fitted with the original arrangement of trolley and skid landing gear, the sixth and eighth prototypes were powered with a quartet of BMW 003 jet engines each. The sixth had it’s engines housed in individual nacelles, and the eighth flown with them paired in a single nacelle on either wing. The remainder were all Jumo 004 powered, with the V7 prototype destined to make history on August 2, 1944 as the first jet aircraft ever to fly a reconnaissance mission.

The few Ar 234Bs that entered service in the fall of 1944 impressed their pilots. They were fairly fast and completely aerobatic. The long takeoff run led to several accidents. A search for a solution led to improved training as well as the use of RATO, or rocket assisted takeoff. The engines were always the real problem; they suffered constant flameouts and required overhaul replacement after about 10 hours of operation.

The most notable use of the Ar 234 in the bomber role was the attempt to destroy the Ludendorff Bridge at Remagen. Between March 7, when it was captured by the Allies, and March 17, when it finally collapsed, the bridge was constantly attacked by Ar 234’s of III/KG 76 carrying 1,000 kg (2,204 lb) bombs. The aircraft continued to fight in a scattered fashion until Germany surrendered on May 8, 1945. Some were shot down in air combat, destroyed by flak, or “bounced” by Allied fighters during takeoff or landing approach. Most simply sat on the airfields awaiting fuel that never arrived.

The box art shows an AR-234 in flight and there is no marking visible. It carries a bomb under it’s belly.

The box says both Hobbycraft and War Eagle on it, with the copy write of the kit belonging to War Eagle. I am not really sure who War Eagle is, but their address is shown as Richmond, Michigan. The instructions state that the kit was molded in South Korea. The copyright date is 1989.

The text on the box is in French and English. Probably because Hobbycraft is based in Canada where French is a second language.

One side panel gives War Eagle’s P.O. Box address in Richmond, MI with the copyright date. This is followed by a one paragraph history of the aircraft in English and it says that world-wide distribution is by Hobbycraft and gives their street address in Ontario, Canada.

The other side panel repeats War Eagle’s P.O. address and the copyright date. This is followed by a features of the kit list in French and English:

89 parts molded in grey and clear.

Inside the box is a large sealed cello bag that holds two trees of medium gray parts, loose fuselage and wing halves and the clear cockpit transparencies. The decal sheet and instructions complete the contents.

The instructions consist of a single sheet that is folded in the center into 4 pages in 9” x 11” page format.

Page one has a small black and white repeat of the box art, followed by a 2 paragraph history of the AR-234 in English. Below this is a listing of paint colors, called out in the RLM numbers for them and what those colors are in English, French, German and Italian. The bottom of the page shows 4 international assembly symbols and what  they stand for.

Page two and three give a grand total of 7 assembly step drawings. Colors, to paint individual parts as you proceed are called out in each assembly step. JATO rocket assembly is shown in step 4 and you can add the bomb to the underside of the fuselage in step 7 if you so desire. Panel lines are all engraved and the control surfaces are all solid, as is the cockpit transparency. The kit has quite a detailed cockpit, but you would have to do major surgery to the transparency to open it.

The fourth page has a 4 view illustration of the only scheme provided in the kit. It is for the Werknummer 40312 mentioned in the history above. It has a splinter pattern of RLM 81 brown violet and RLM 82 light green above and RLM 76 light blue underneath. The rear part of the engine nacelles is in RLM 22 black. It carries the fuselage code of F1 (in small black letters) + GS (larger letters) GS is black letters with red outlining. The fuselage cross is of the white outline type only. The swastika on the tail is all white and on the decal sheet it has been cut in two diagonally. This is probably to make it okay for distribution in Germany, where the symbol is a no no.

I started to do some rudimentary assembly of this kit years ago and then, for some reason, stopped building it. 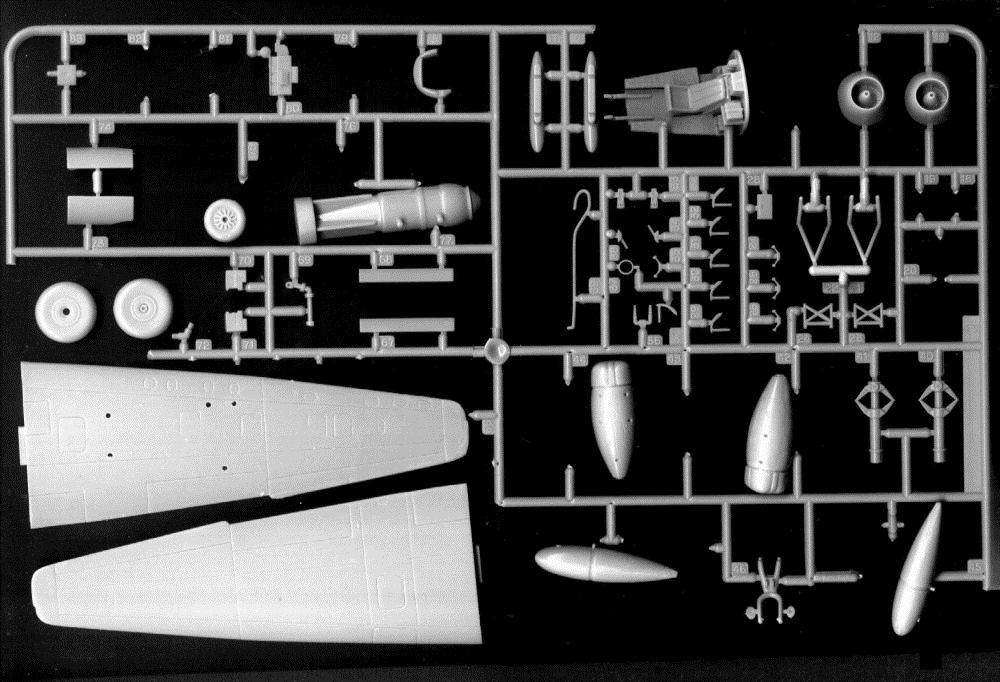 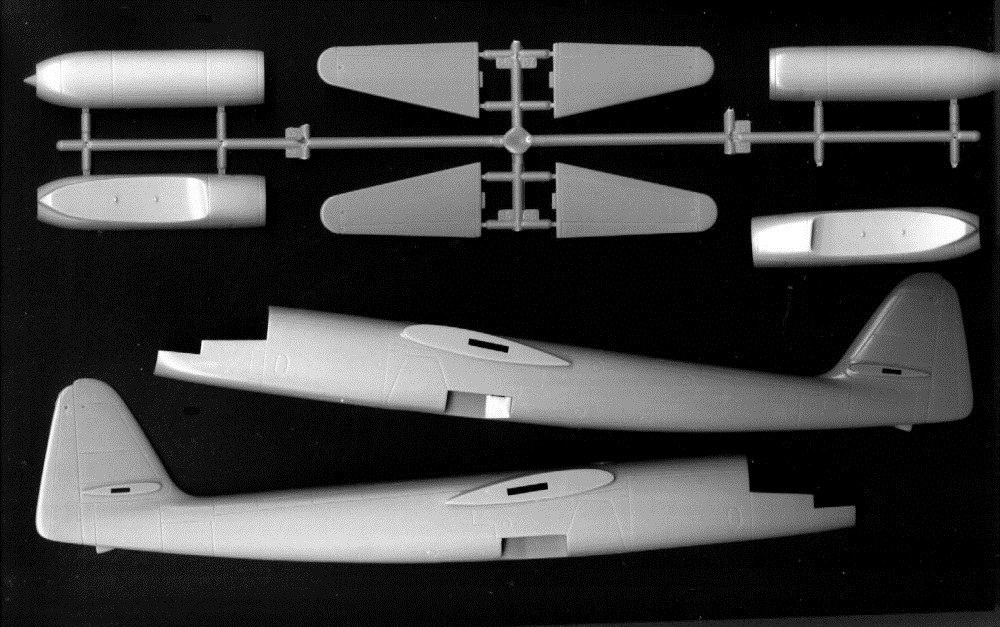 There are 4 wing halves and the fuselage halves. I have already glued the wing halves together. All control surfaces are molded solid and panel lines are engraved. My impression of the engraved detail is that it seems a little sparse. More could have been engraved into this model.

The clear parts for the cockpit are next and there are 2 parts on the tree.

The decals are next and to me they don’t look so hot. I would recommend replacing what’s there with some better ones, if you can match the markings. The large letter G’s look smeary. You have to piece together halves of the white swastika. All marks have a lot of carrier film to trim off the edges too. All together a lousy decal sheet. 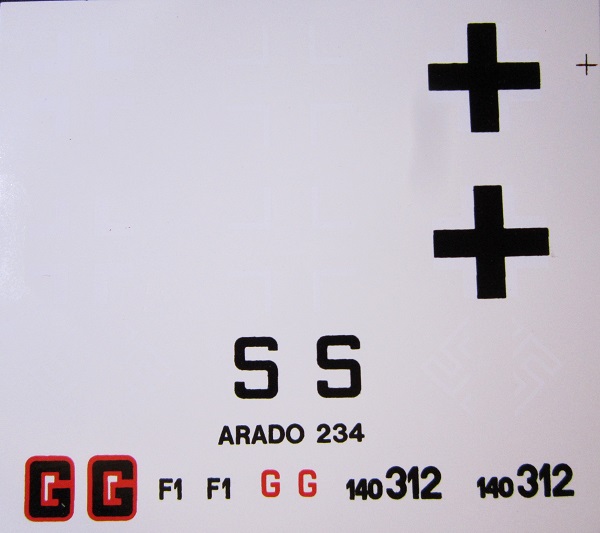 I purchased 2 after-market accessory sets to dolly up this model. One is the Airwaves brand brass PE set no. AC-4806 and the Black Magic die cut cockpit masking set no. CEBM48524. I have the Revell of Germany kit of the 4 engined AR-234 and usually there are more than one option for markings on their decal sheets that I can maybe use on this kit. 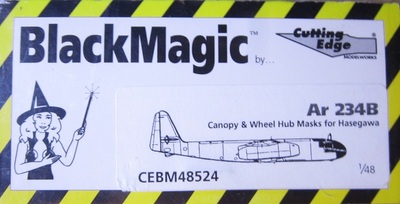 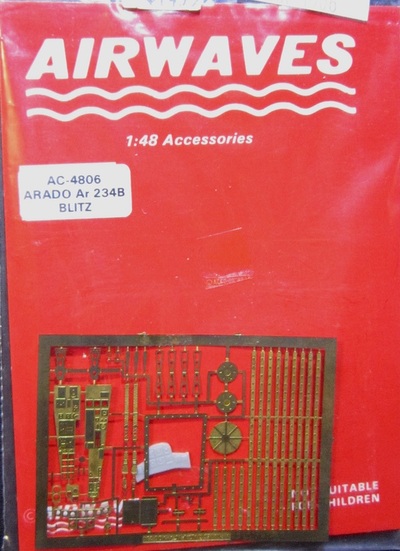 
I purchased my kit 35 years ago at my local hobby shop.