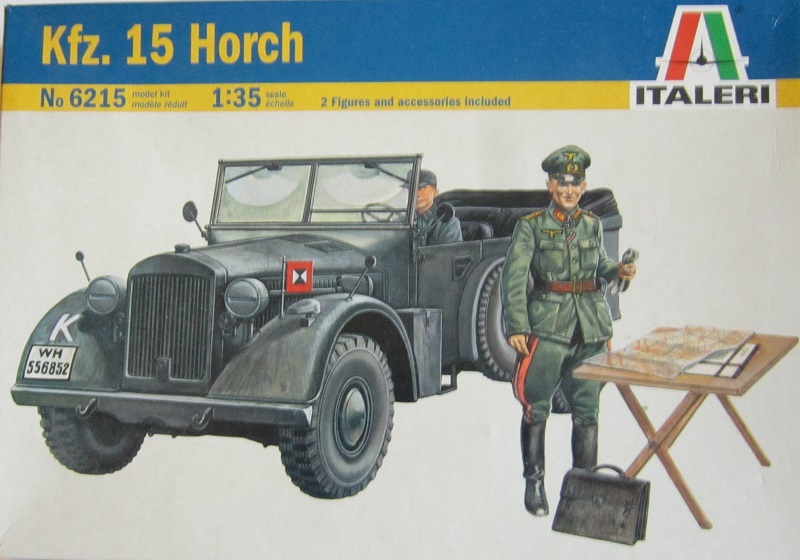 I paid $10.00 for this kit to a vendor at an IPMS contest. I don’t know if it is still available or not. Italeri does re-issue their kits constantly however.

HISTORY:
The Horch-manufactured Kfz.15 was widely used by German forces during WWII. A versatile 4WD vehicle, its well-designed chassis featured 4-wheel independent suspension, and it could carry a maximum of 4 passengers at speeds of up to 90km/h thanks to the 85hp 8-cylinder engine. In a unique design twist, its spare tires were kept on the side of the car and were able to rotate in their storage position, lending a hand should the Kfz.15 encounter rough terrain. Its production ran from 1937 to 1943, and the Kfz.15 could be seen in service in a range of locations: the Western Front, the Balkans, North Africa, and the Eastern Front. Perhaps its most significant action was in the hands of Rommel's Afrika korps, which put the sturdy and nimble vehicle to extensive use in their battle of attrition with British forces.
THE KIT:

This kit came in a shrink-wrapped tray and lid box when new. My second hand kit had already been opened by the vendor.

The box art shows a Horch in overall Panzer grey with a white letter K on the left front fender over a white license plate with the black license no. WH 556852 below it. A red flag on a pole is atop the right fender. It has a square in the center that is divided into alternate black and white triangles.

A diver figure is seated in the car and an officer is standing beside the car near a folding table laden with field maps. There is a brief case on the ground leaning against a leg of the table.

This scene is posed against an all white background, similar to how Tamiya does their box arts.

One side panel begins with 2 different web site addresses for Italeri. MADE IN ITALY appears and Italeri’s street address in Italy. This is followed by one paragraph histories in 6 languages, including English, all marked with color illustrations of the flags of the countries that speak those languages. It is said that the model makes up to be 13.4 cm long (5 ¼”).

The other side panel begins with the same two web addresses, followed by features of the kit and that the kit is designed for modelers over 10, in the multiple languages. The copyright date given is 2005.

Next is a listing of Model Master brand hobby paints and 2 walk around type photos of the model made up in the box art scheme.

This kit contains 2 medium grey trees, a clear tree, a tree of black vinyl tires, the decal sheet, and a sheet of “Important Information concerning the kit” in 20 languages.

The instructions consist of a single sheet that accordion folds out into 8 pages in 7” x 11” page format.

Page 1 of the instructions begins with a repeat of Italeri’s steet address in Italy, followed by a black and white side photo of a Horch that is in the Deutches Musium in Munich and the history of the Horch in Italian and English.

Page 2 begins with “Attention-useful advice” about the kit, in 8 languages including English, followed by the parts trees illustrations.

Page 3 through 6 give a grand total of 9 assembly steps.

Page 7 has three 3-views for marking and painting schemes:

2.     A Horch with Befehlshaber Pz. Gruppe Von Kleist, URSS 1942. It is in overall sandgelb with chocolate brown splotches. The license no. WH 556852 is on the front and rear along with a large letter K.

3.     A Horch with Batterie 5 Artillerieregiment 10 (MOT), Pz. Grenadier Division 10, Pz. Gruppe 2, Guderian, URSS October 1941. It is in overall sandgelb with chocolate brown and dark green splotches. The license no. is WH 603873 on the front and rear. A large letter G is on the front and rear along with a division mark.

Model Master brand paints are listed along with their RLM numbers for these colors. The bottom of the page gives the decal application instructions in 8 languages, including English.

Page 8 gives the history of the Horch in French, German, Japanese and Italian.

The sheet with the “Important information etc.” has a coupon on the other side of it to use to mail to Italeri about any problems encountered with the kit.

I have the Horch, the 2 figures, the folding wood table all assembled except for the wheels, tires and clear parts until after the kit is painted.

The parts trees are NOT alphabetized, but the part numbers are on them. 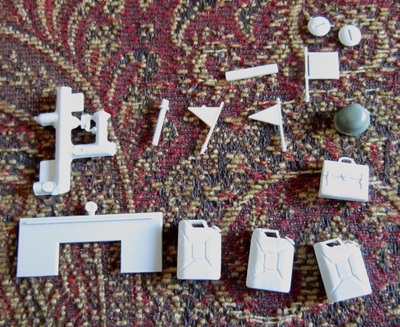 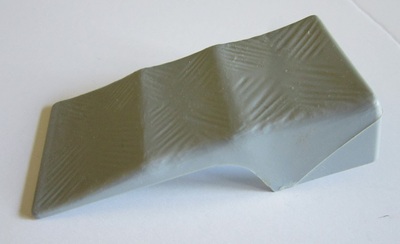 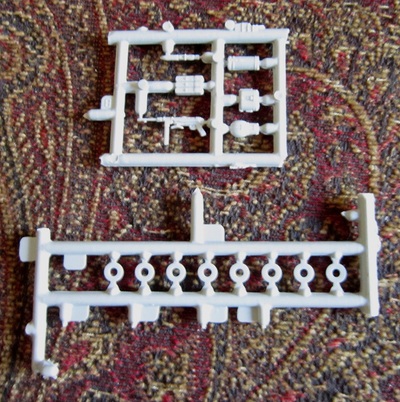 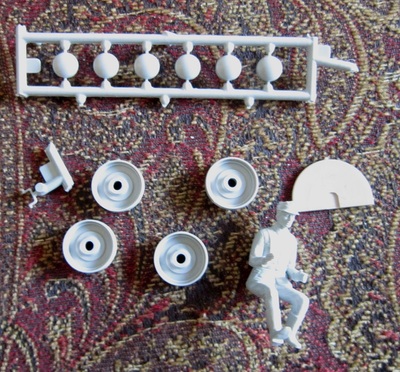 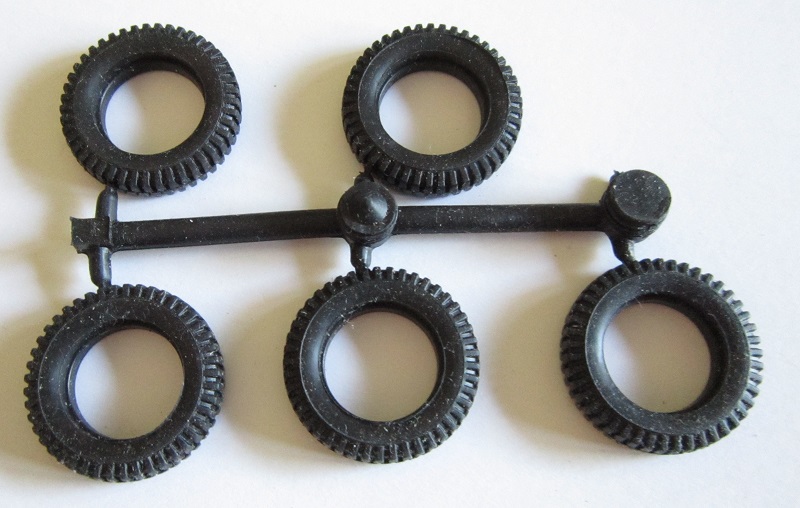 To further detail this kit I purchased the M.V. Products brand of light lenses, set no. LS11 and the Archer Dry Transfer brand set of rub-on type decals for German Afrika Korps Insignia in white, set. No. AR 35026W and their German Information Placards, set no. AR35215. 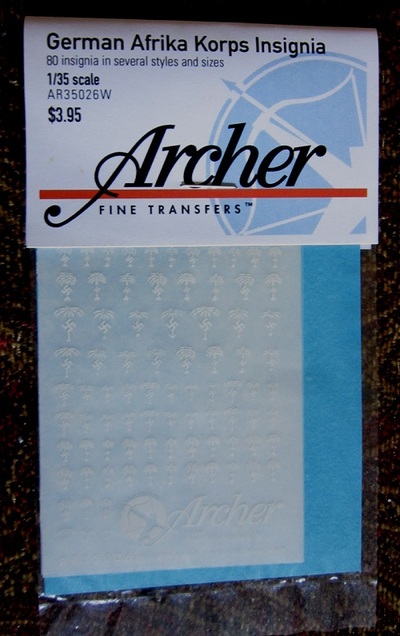 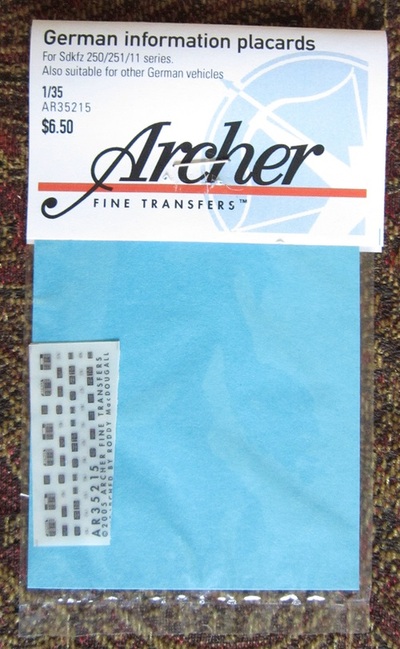 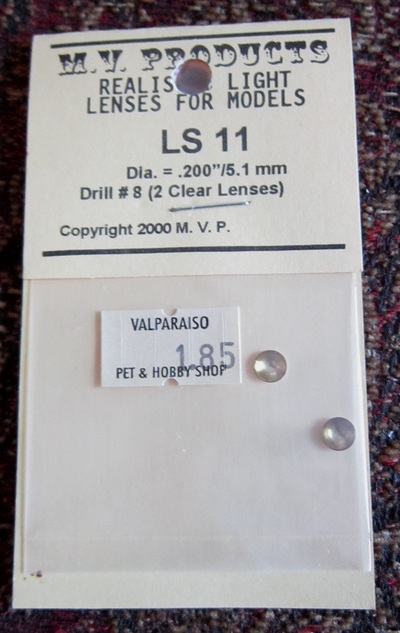 I bought the kit from a vendor at a IPMS contest years ago for just 10 bucks. Nice to get a bargain once in a while. I discovered when I got home and examined the contents that I had 2 trees of clear parts, 2 canvas roofs (one medium grey and the other tan) and double the black vinyl tires. Strange! 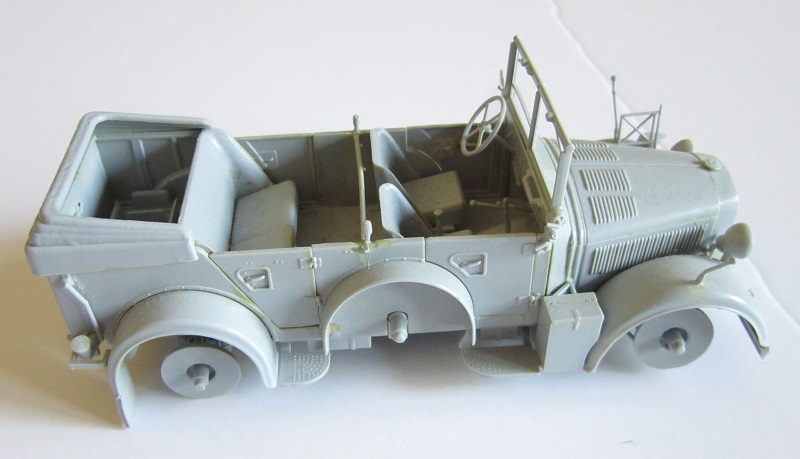 I recommend this kit to modelers of all building skills.