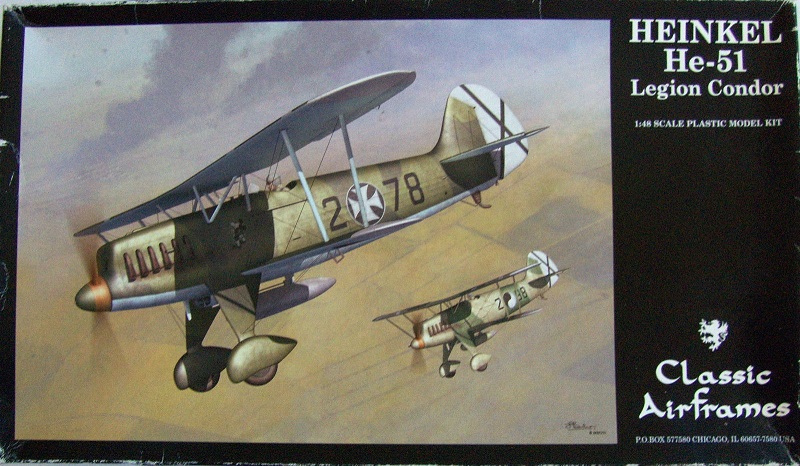 Classic Airfames was a model company based in Chicago, Illinois USA. I don’t think they exist anymore.

Developed from the He-49 series of aircraft in the 1930’s, the leaner and more refined He-51 truly marked the rebirth of German fighter aviation. Service delivery of the first A-series He-51’s was in summer of 1934, with its combat debut occurring in Spain in August 1936. Pilots accustomed to the much-lighter Arado 65 initially found the new Heinkel fighter to be a challenging precursor to later faster and more heavily loaded “modern” fighters.

Although enjoying various successes during the Spanish Civil War, it soon became obvious that the He-51 was simply not on a par with new developments in fighter design. Much like many biplane contemporaries, the He-51 was a successful design at the end of an era.

However, the overall success of the design led to manufacture by such companies as AGO, Arado, Erla and Fiesler. Although quickly rendered obsolescent by newer designs, the He-51 was still in active service in Poland in September 1939, and was used as an advanced trainer up until 1943.

The kit comes in a shrink wrapped tray and lid type box. The box art shows 2 He-51’s flying along in schemes of light gray with green wave patterns over it and blue undercarriages. They have white rudders with a black cross over them. The aircraft in the foreground has the fuselage code in black of a number 2, then a black circle outlined in white with a white cross on it and the black number 78 behind the circle.Inside the kit we are provided with the pilots names that flew some of the He-51’s, but not a pilot’s name for this particular one. I later found out on line that this was the mount of the famous ace Adolf Galland. It carries his personal marking of Mickey Mouse on the fuselage sides just forward of the windscreen.

The He-51 in the background has the same color scheme, also with the white rudder with black cross on it. The fuselage code is a black number 2, then a black and white “Ying Yang” insignia followed by a black 98. This aircraft was flown by Lt. Kurt Strumpell of the 3.J/88, circa February 1938 of the “Legion Condor” during the Spanish Civil War.

One side panel repeats the box art as a smaller illustration, followed by a list of the kits features:
Fully detailed plastic parts.
Complete cockpit interior.
Markings for several aircraft.
Complete assembly and decorating instructions.
It then says the kit was produced by MPM Productions LTD. And gives their street address in Prague, Czech Republic.

The decals, instructions and a sheet of painting and marking schemes completes the kit’s contents.

The instructions consist of a single sheet folded in the center. Another single sheet is inserted into this to form 6 pages in 9” x 8” page format.

Page 1 of the instructions begins with a profile line drawing of the He-51, followed by the history of the aircraft in English and the statement that the kit is intended for experienced modelers etc. and to use super glue for the resin parts. A fellow named Steven Eisenman is thanked for his research assistance on making this kit project.

Below this is Classic Airframe’s street address that was in Chicago.

Page 2 begins with international assembly symbol explanations and alphabetic codes that are shown throughout the assembly steps indicating what colors to use.

Below this is the parts trees illustrations.

Page 3 through 6 give a total of 11 assembly steps.

Another sheet is in the kit that is folded in the center to form 4 pages in 6” x 9” page format. This contains four painting and marking scheme.

1.  A 4-view of the aircraft shown in the background in the cover art. Already described above.

2.  A 4-view of a He-51 flown by Oblt. Harro Harder, 1.J/88, circa Summer 1937. Legion Condor, Spanish Civil War. It is in a light gray with green splotches above a blue undercarriage. The rudder is white with the black cross on it. The fuselage code is a black number 2 and then a black circle with a white swastika on it followed by a black number 64.

3.  A 4-view of a He-51 flown by Dr. Heinrich Neumann, circa December 1937. Legion Condor, Spanish Civil war. It also is in light gray with green swatches above the light blue undercarriage. The tail has the white rudder with black cross over it. Fuselage code is a black number 2 then a white circle outlined in black and a black number 85.

4.  A 4-view of a He-51 flown by Oblt. Hannes Trautloft, Escaiona Spain, circa August 1936. It has the same scheme as the above 3 aircraft. The fuselage code is a black number 2 followed by a black circle and a black number 4.

All of these aircraft have white wing tips. The 4th one only has a single black circle on it’s wings, where the others have 2 circles per wing.

Another fuselage marking on the decal sheet that is not mentioned in the schemes has the fuselage code of a black number 2 followed by a black circle with a white skeletal cross on it and the black number 102 behind the circle. I found an actual wartime photo of this aircraft on the internet that a modeling friend directed me to. However, they don’t say there who’s aircraft it was either.

This photo shows a white cursic  “Annalis” below the cockpit and a whole paragraph in white German over the fuselage circle. (No….I don’t know what the heck it translates into). Can anybody out there shed more light on this one ? 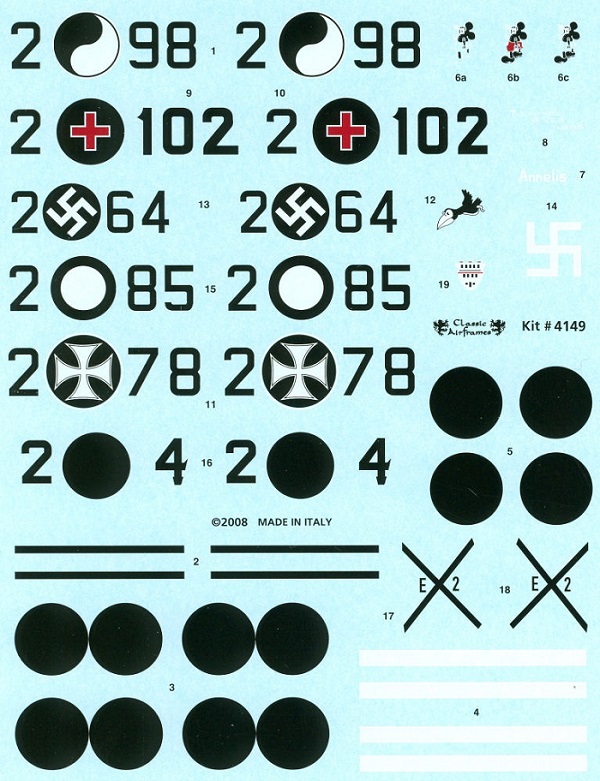 The decal sheet has a frosted sheet for the decal sheet that was obviously included to protect the face of the sheet from scratching. However, this sheet was floating around loose in the box and not protecting a darn thing. 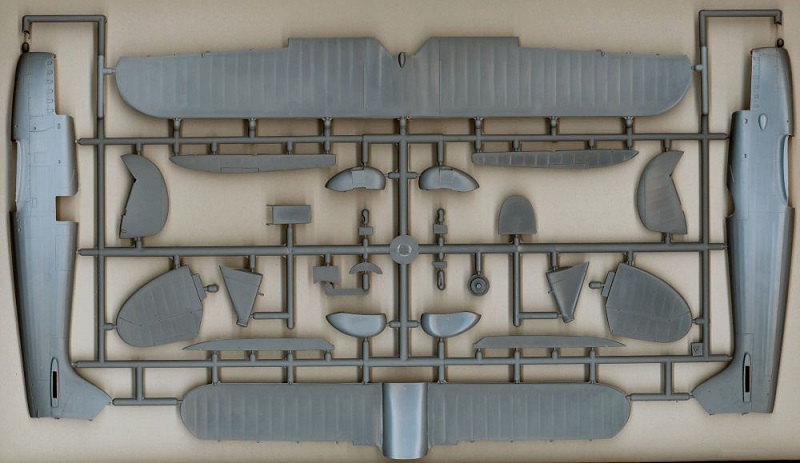 The clear windshield part and the decal sheet completes the kit’s contents. 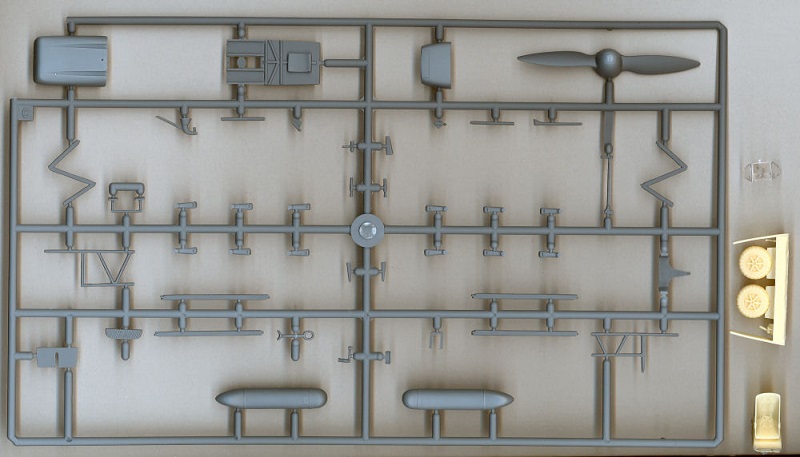 The molding of the kit is very nice, with finely done ribs where the aircraft was fabric covered. I recommend the kit to modelers of average building skills and experience with rigging a biplane model, which is chore I hate…so I will probably sell this kit off.

I believe this kit was first released just after the first of this century. It has appeared in several different box arts with different decal sheets. I've been told that Classic Airframes is out of business now.