The Piper J-3 Cub is an American light aircraft that was built between 1937 and 1947 by Piper Aircraft. The aircraft has a simple, lightweight design which gives it good low speed handling properties and short field performance. The Cub is one of the best known light aircraft of all time. The Cub's simplicity, affordability and popularity — as well as its large production numbers, with nearly 20,000 built in the United States — invokes comparisons to the Ford Model T automobile.
The Cub was originally intended as a trainer, and saw great popularity in this role and as a general aviation aircraft. Due to its performance, it was well suited a variety of military uses such as reconnaissance, liaison and ground control, and was produced in large numbers during the Second World War as the L-4 Grasshopper. Large numbers of Cubs are still flying today. Notably Cubs are highly prized as bush aircraft.

The Cub is a high-wing strut-braced monoplane with a large area rectangular wing. It is powered by an air-cooled piston engine driving a fixed pitch propeller. Its fuselage is a welded steel frame covered in fabric, seating two people in tandem.The Taylor E-2 Cub first appeared in 1930, built by Taylor Aircraft in Bradford, Pennsylvania. Sponsored by William T. Piper, a Bradford industrialist and investor, the affordable E-2 was meant to encourage greater interest in aviation. Later in 1930, the company went bankrupt, with Piper buying the assets but keeping founder C. Gilbert Taylor on as president. In 1936, an earlier Cub was altered by employee Walter Jamouneau to become the J-2 while Taylor was on sick leave.

(The coincidence led some to believe that the "J" stood for Jamouneau, while aviation historian Peter Bowers concluded that the letter simply followed the E, F, G, and H models, with the I omitted because it could be mistaken for the numeral one.).[3][4] When he saw the redesign, Taylor was so incensed that he fired Jamouneau. Piper, however, had encouraged Jamouneau's changes, and hired him back. Piper then bought Taylor's share in the company, paying him US$250 per month for three years.

Although sales were initially slow, about 1,200 J-2s were produced before a fire in the Piper factory ended its production in 1938. After Piper moved his company from Bradford to Lock Haven, the J-3, which featured further changes by Jamouneau, replaced the J-2. The changes mostly amounted to integrating the vertical fin of the tail into the rear fuselage structure and covering it simultaneously with each of the fuselage's sides, changing the rearmost side window's shape to a smoothly curved half-oval outline, and placing a true steerable tailwheel at the rear end of the J-2's leaf spring-style tailskid, linked for its steering function to the lower end of the rudder with springs and lightweight chains to either end of a double-ended rudder control horn.
Powered by a 40 hp (30 kW) engine, in 1938, it sold for just over $1,000.
A number of different air-cooled engines, most of flat-four configuration, were used to power J-3 Cubs, resulting in differing model designations for each type: the J3C models used the Continental A series, the J3F used the Franklin 4AC, and the J3L used the Lycoming O-145. A very few examples, designated J3P, were equipped with Lenape Papoose 3-cylinder radial engines.

The outbreak of hostilities in Europe in 1939, along with the growing realization that the United States might soon be drawn into World War II, resulted in the formation of the Civilian Pilot Training Program (CPTP). The Piper J-3 Cub became the primary trainer aircraft of the CPTP and played an integral role in its success, achieving legendary status. 75 percent of all new pilots in the CPTP (from a total of 435,165 graduates) were trained in Cubs. By war's end, 80 percent of all United States military pilots had received their initial flight training in Piper Cubs.
The need for new pilots created an insatiable appetite for the Cub. In 1940, the year before the United States' entry into the war, 3,016 Cubs had been built; wartime demands soon increased that production rate to one Cub being built every 20 minutes.

The aircraft's standard chrome yellow paint has come to be known as “Cub Yellow” or "Lock Haven Yellow".

Prior to the United States entering World War II, J-3s were part of a fund-raising program to support the United Kingdom. Billed as a Flitfire, a Piper Cub J3 bearing Royal Air Force insignia was donated by W. T. Piper and Franklin Motors to the RAF Benevolent Fund to be raffled off. Piper distributors nationwide were encouraged to do the same. On April 29, 1941 all 48 Flitfire aircraft, one for each of the 48 states that made up the country at that time, flew into La Guardia Field for a dedication and fundraising event which included Royal Navy officers from the battleship HMS Malaya, in New York for repairs, as honored guests. At least three of the original Flitfires have been restored to their original silver-doped finish; one, powered with a Franklin 65 engine, is on display at the North Carolina Aviation Museum in Asheboro, North Carolina. This Flitfire was flown by Orville Wright in a war bond promotion campaign.

The Piper Cub quickly became a familiar sight. First Lady Eleanor Roosevelt took a flight in a J-3 Cub, posing for a series of publicity photos to help promote the CPTP. Newsreels and newspapers of the era often featured images of wartime leaders, such as Generals Dwight Eisenhower, George Patton and George Marshall, flying around European battlefields in Piper Cubs. Civilian-owned Cubs joined the war effort as part of the newly formed Civil Air Patrol (CAP), patrolling the Eastern Seaboard and Gulf Coast in a constant search for German U-boats and survivors of U-boat attacks.

All L-4 models, as well as similar, tandem-cockpit accommodation aircraft from Aeronca and Taylorcraft, were collectively nicknamed “Grasshoppers”, though the L-4 was almost universally referred to by its civilian designation of Cub. The L-4 was used extensively in World War II for reconnaissance, transporting supplies, artillery spotting duties, and medical evacuation of wounded soldiers.

During the Allied invasion of France in June 1944, the L-4's slow cruising speed and low-level maneuverability — alongside examples of the Auster AOP aircraft occasionally used by the British Army and other Commonwealth forces for the same purposes — made it an ideal observation platform for spotting hidden German tanks, Sturmgeschütz and Jagdpanzer tank destroyers waiting in ambush in the hedgerowed bocage country south of the invasion beaches.
For these operations the pilot generally carried both an observer/radio operator and a 25-pound communications radio, a load that often exceeded the plane's specified weight capacity.

After the Allied breakout in France, L-4s were also sometimes equipped with improvised racks, usually in pairs or quartets, of infantry bazookas for ground attack against German armored units. The most famous of these L-4 ground attack planes was Rosie the Rocketeer, piloted by Maj. Charles "Bazooka Charlie" Carpenter, whose six bazooka rocket launchers were credited with eliminating six enemy tanks and several armored cars during its wartime service, especially during the Battle of Arracourt.

After the war, many L-4s were sold as surplus, but a considerable number were retained in service. L-4s sold as surplus in the U.S. were redesignated as J-3s, but often retained their wartime glazing and paint.
​THE KIT:

Smer is a model company based in Czech Republic.

This kit came in a long shrink-wrapped tray and lid type box.

The box art shows a Cub in all white paint job with Czeck roundels on it's wings and rudder and a black number 10 on the sides of the fuselage. It has a black engine protruding from the cowling and a wood propeller. It is shown flying over the control tower of an airfield. This box art has no text on it and is suitable for framing.

One side panel has a small color illustration of the nose of a Cub that is all red. 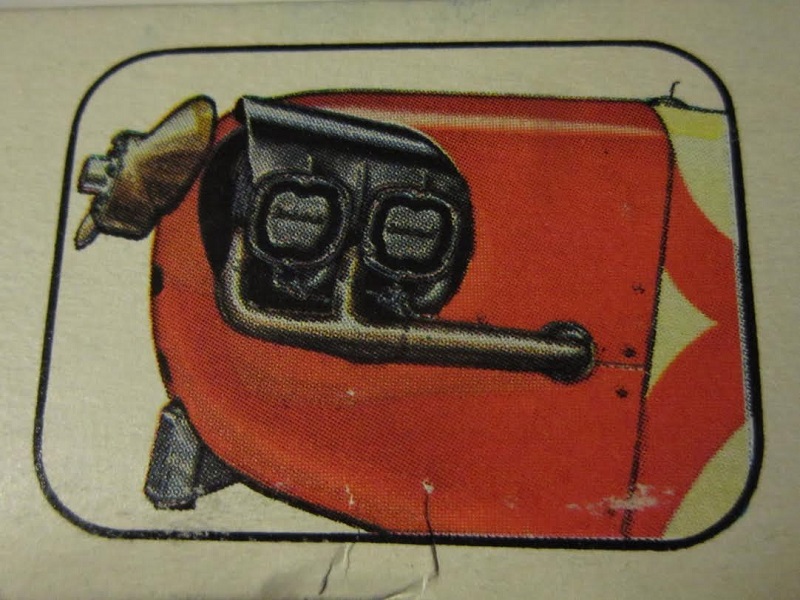 The other side panel has a color profile of the Cub that has the red nose. The red of the nose continues down the length of the fuselage as a scallop. It has the black fuselage lettering OK-YFM on its sides and a Czech flag on the rudder.

Trees are not alphabetized, but have numbers on the sprues. 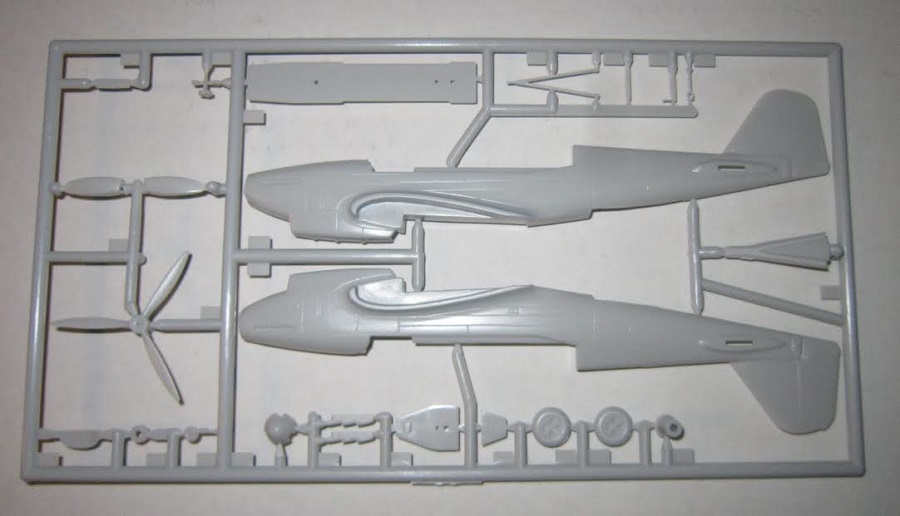 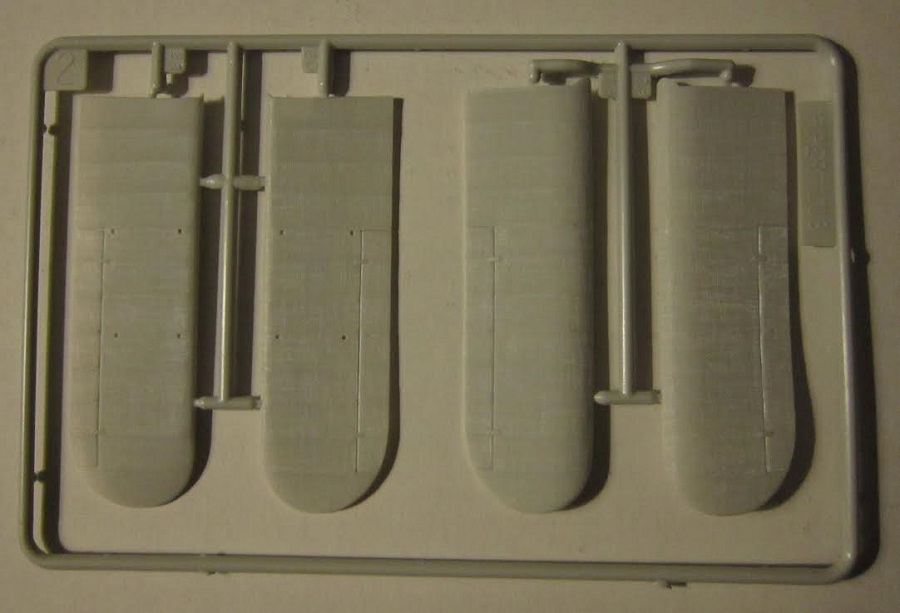 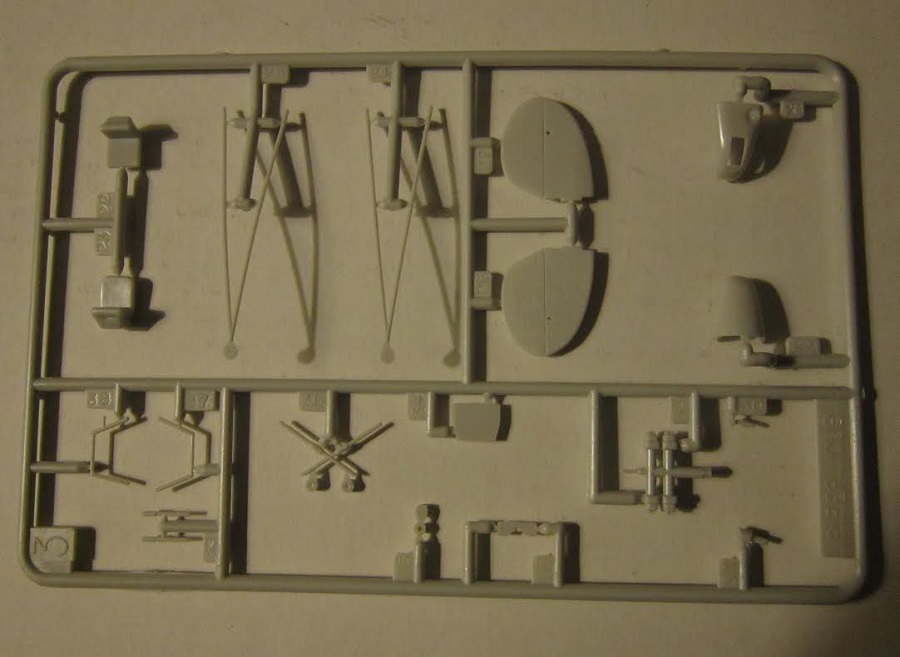 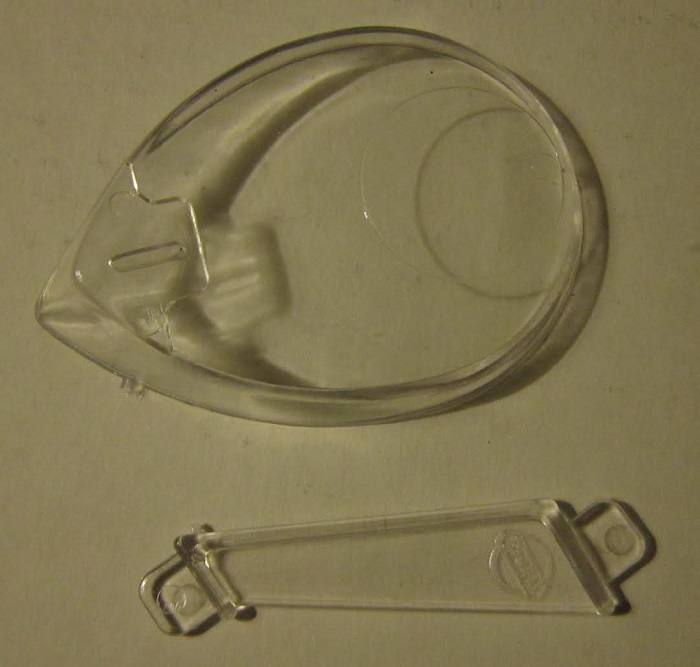 The other clear tree holds the cockpit windows (4 parts). 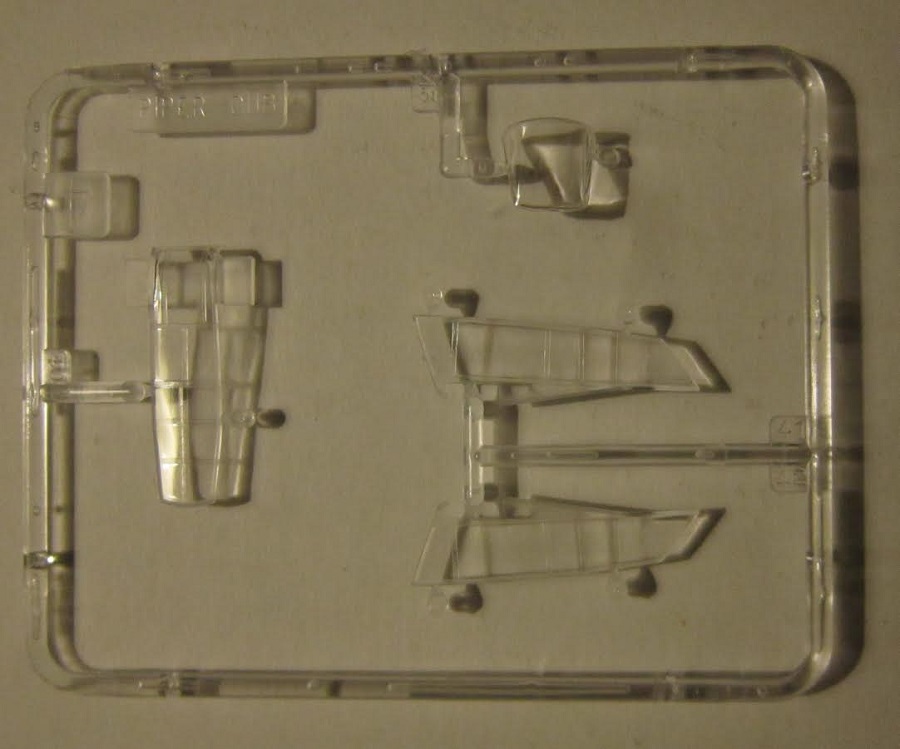 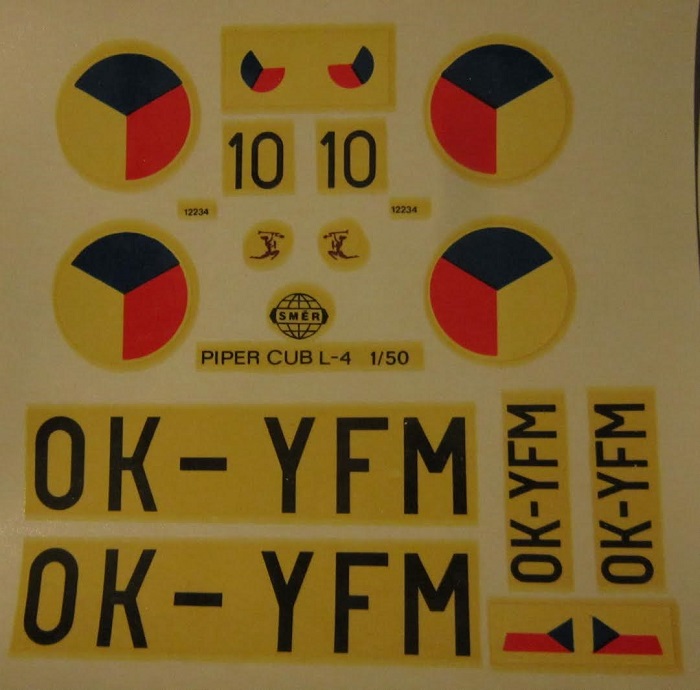 ​The instructions consist of a single sheet that is folded in the center to create 4 pages in 11 3/4" x 8 1/2" page format, folded again to fit the box.

Page 1 begins with a color repeat of the box art, followed by the history of the Cub in Czech.

Page 2 continues with the history in Czech, followed by 8 assembly steps spread across half of the page and half of page 3.

The other half of page 3 has a black and white photo of a pilot kneeling next to a Cub that is the box art one on a snow covered airfield.

Page 4 has a black and white photo of the actual no. 10 aircraft and a 3-view color illustration of it, with a lot more Czech text.

There is no pilot or passenger figure in the kit.

It has nice detail and lightly engraved panel lines. Control surfaces are molded solid and would take surgery to re-position. State of the art for a kit this old.