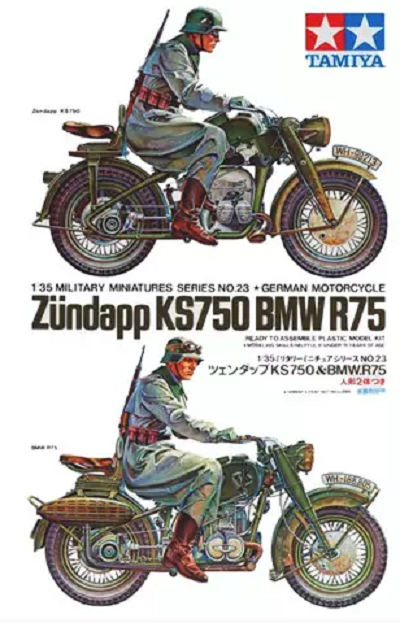 The Zündapp KS 750 is a World War II-era motorcycle and sidecar combination developed for the German Armed Forces during the Second World War by the German company Zündapp G.m.b.H. After entering service in 1941, it served on all the major German battlefronts and was used in a variety of roles.

A payload of 500 kg, corresponding to three fully equipped soldiers.
A fully loaded permanent speed of 80 km/h on the Autobahn and 95 km/h maximum speed. The minimum speed had to be 4 km/h to accompany marching troops.

A minimum ground clearance of 150 mm and enough clearance under the mudguards in order to use snow chains.

The BMW R75 is a World War II-era motorcycle and sidecar combination produced by the German company BMW.

In the 1930s BMW were producing a number of popular and highly effective motorcycles. In 1938 development of the R75 started in response to a request from the German Army.

Pre Production models of the R75 were powered by a 750 cc side valve engine, which was based on the R71 engine. However it was quickly found necessary to design an all-new OHV 750 cc engine for the R75 unit.

This OHV engine later proved to be the basis for subsequent post-war twin BMW engines like the R51/3, R67 and R68.

The third side-car wheel was driven with an axle connected to the rear wheel of the motorcycle. These were fitted with a locking differential and selectable road and off-road gear ratios through which all four and reverse gears worked.

This made the R75 highly manoeuvrable and capable of negotiating most surfaces. A few other motorcycle manufacturers, like FN and Norton, provided an optional drive to sidecars.

The BMW R75 and its rival the Zündapp KS 750 were both widely used by the Wehrmacht in Russia and North Africa, though after a period of evaluation it became clear that the Zündapp was the superior machine

In August 1942 Zündapp and BMW, on the urging of the Army, agreed upon standardization of parts for both machines, with a view of eventually creating a Zündapp-BMW hybrid (designated the BW 43), in which a BMW 286/1 side-car would be grafted onto a Zündapp KS 750 motorcycle.

They also agreed that the manufacture of the R75 would cease once production reached 20,200 units, and after that point BMW and Zündapp would only produce the Zündapp-BMW machine, manufacturing 20,000 each year.

Since the target of 20,200 BMW R75's was not reached, it remained in production until the Eisenach factory was so badly damaged by Allied bombing that production ceased in 1944. A further 98 units were assembled by the Soviets in 1946 as reparations.

However the standardization program meant that machines that were produced by BMW and Zündapp used 70% of the same components. This simplifies the supply of spare parts for these vehicles, many of which are still in the hands of historic motorcycle enthusiasts.

These vehicles are still highly desirable as collector's items because of their complex and durable technology, and are correspondingly expensive. A well-restored R75 can be still used for everyday purposes, on or off-road without problems.

During World War 2 the Soviet Union quietly purchased five units of the R-71 (the R-75's predecessor) via Swedish intermediaries to study and subsequently build their own version, the M-72, which Stalin approved for production.

In 1954 a small number of modified R75 models were produced at Eisenach (then in Soviet-controlled East Germany) for testing under the designation AWO 700, but were not put into full production.

The success and reliability of the shaft-driven R75 during the war led to the US Army requesting that Harley-Davidson produce a similar shaft-driven cycle for American troops.

This led to Harley producing their first ever shaft-driven model, the Harley-Davidson XA, which was a near duplicate of the R75.

Tamiya is a old prolific model company based in Shizuoka City, Japan.

Both motorcycles are overall panzer grey. The Zundapp has a white license plate on the front fender with serial no. WH-99213 in black on it.

The BMW also has a white license plate on the front fender with serial no. WH-188805 in black on it.

The riders are in field grey uniforms with steel helmets with goggles strung around them, black jack boots, leather belts with ammo pouches on them and 98k carbines slung on their backs.

These two illustrations are posed against one of Tamiya's signature all white box art backgrounds that they use for the majority of their box arts.

No kit numbers are provided for these 3 kits.

​The other side panel repeats the 2 motorcycles box art pictures smaller with paragraphs about them only in Japanese.

The kit contains 2 very dark green trees of parts and the decal sheet in a sealed clear cello bag and the instructions.

The instructions consists of a single-sheet that is printed on both sides in 7 1/2" x 20" page format, folded 3 times along it's length to fit the box.

The face side begins with a black and white repeat of the box art showing the 2 bikes overlapping each other, over the history of the bikes, a line drawing of a kettenkraftrad and a unit organization chart.

Below this is the painting and marking guides for the 2 figures and the bikes. There are 2 markings for Wehrmacht, SS and Luftwaffe bikes. Text is all in Japanese.

Trees are alphabetized, but not illustrated in the instructions. 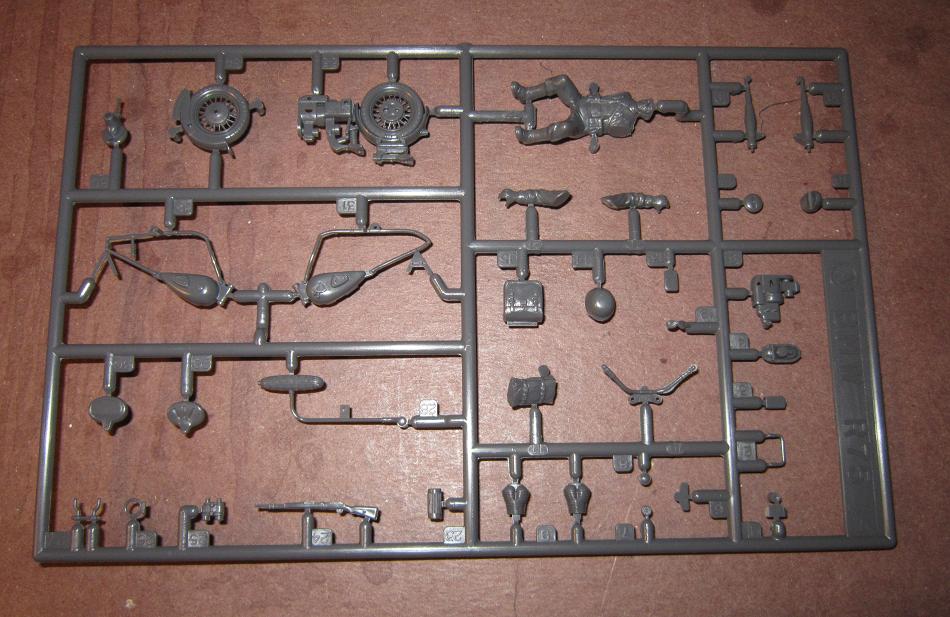 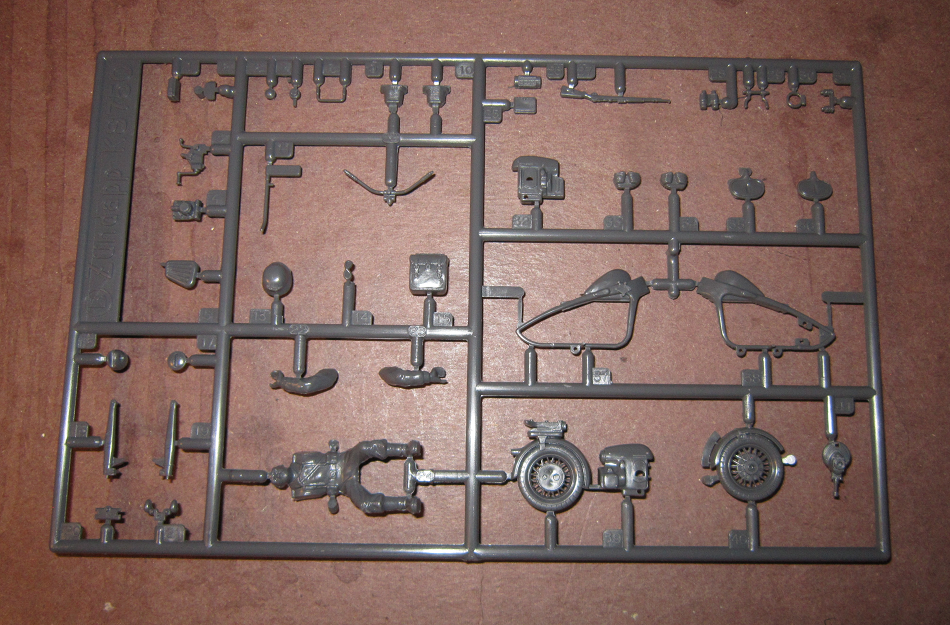