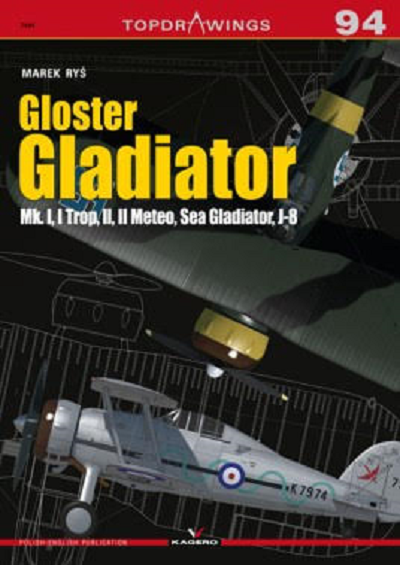 The Gloster Gladiator is a British fighter constructed at the Gloster Aircraft Company. The prototype was created in 1934. It was powered by a 645 hp Bristol Mercury VIS engine.

The Gloster Gladiator Mk. I had a 8,382mm long fuselage, which consisted of four numbered sections. The first of these included the engine bed, the second front fuselage, the third – the rear fuselage, and the fourth – tail. The arrangement and equipment inside the truss was marked with letters and numbered from one to eight fuselage partitions corresponding to the distances between the frames.

Clearly straight main panels with a span of 9,845 mm were built around two Hawker steel girders. The upper and lower supports of the girders were made of rolled octagonal elements, and the wavy lining provided strong points for attaching four aerodynamically profiled traverse struts.

Such wing structure was finished with light alloy ribs, stringers and steel and duralumin spreader bars. The Goster Mk. I drive was a manually started Bristol Mercury Mk. IX engine.

It was a nine-cylinder, air-cooled, single star unit, with a displacement of 3,860.8 cm. It could generate 830 hp. The Gladiator undercarriage consisted of two metal legs with a conical profile, covered with aerodynamically profiled wooden housings. The legs widened downwards to form a rigid A-shaped structure.

Dowty system impact absorbing wheels were internally arched due to a lack of oil-air shock absorber and placed on the hubs. Dunlop aerodynamic tires with dimensions of 178 x 483 mm were used. The radio was placed on a metal shelf in fuselage segment number 4, behind the cockpit .

It was an amplitude-modulated Plessey TR9 high-frequency (HF) transceiver for aIr-to-ground and air-to-air communication.

Kagero Pulishing is based in Lublin, Poland

This book is in both Polish and English.

The cover art shows a color illustration of a Gloster Gladiator Mk. I side view and a top view, on a black background that has a white line drawing of the top of a Gladiator on it.

The Mk. I I overall light-grey. It has a red cowling front, a long black stripe the length of the fuselage sides that ends with a lack serial no. K7974. The British roundel is atop the stripe. The K7974 is also on the rudder flap in black. There is a black winged sword insignia on the left side of the rudder and a illustration of Popeye the Sailor on the right side rudder.

Above the fuselage stripe there are 4 medium-grey tops of circles.

This Gladiator was with the 87th RAF Squadron, England, around 1938. The winged sword emblem was the logo of the 601st RAF Squadron, that never flew Gladiators. On the 1st of August, 1940 in Sudan, P/O Green flying this plane shot down an Italian    Caproni Ca. 133.

The second Gladiator in color and as a top view is a Gladiator Mk. II, with the Finnish Air Force of the 2nd/LeVel 16, Hirvas Base, summer 1942. It is in a wave pattern of 2 greens, over a light-grey undercarriage. The back half of the cowling is yellow and it has a yellow wide fuselage band with black serial no. GL-264 on it. It has a white spinner. The Finnish Air Force swastika insignia is a white circle with a blue swastika on it. It is on the fuselage sides and under the lower wings. The lower wings have wide yellow tips. On top of the upper wings the swastika are along in blue outlined in white. There is a logo of a pale alligator with a long tail on the sides of its rudder.

There are two loose fold out sheets inserted into the center of this book. They are both in 15 ½” x 22 ½” single-sheets printed on both sides and folded twice to fit the book.

The first on has a 1/32nd scale 5-view line drawing on it of the Gloster Mk. I on it and its fuselage bulkheads.

The reverse side shows another 5-view in 1/32nd scale of the Mk. I and the bulkheads.

The second fold out sheet is the same size format. The face side shows a 1/32nd scale 5-view line drawing of the Sea Gladiator.

The reverse side shows a 1/32nd scale 5-view line drawing of the Mk. II.

This is one neat book on the Gladiator. It will be of great interest to modelers contemplating building a model of a Gladiator and of interest to aviation historians alike.

I want to sincerely thank Casemate Publishers, the North American distributor of Kagero books for this review sample. All Kagero book titles can be viewed on Casemate’s website at:
www.casematepublishers.com
​Highly Recommended.