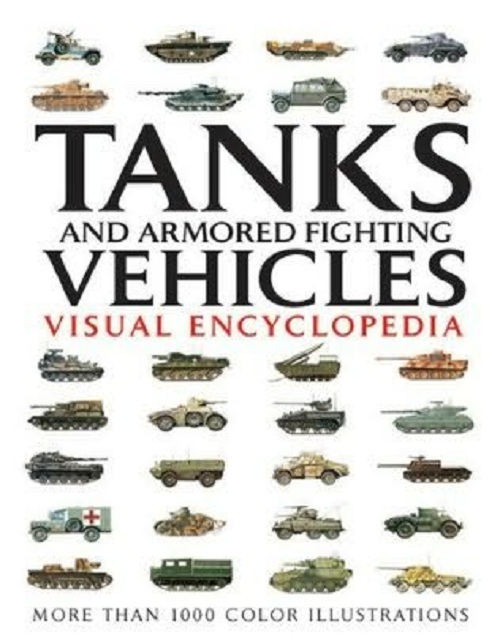 Bargain price: $19.98
Since World War I, weapons of war have become increasingly more sophisticated as industrialization and computerization have taken a hold in weapons design and manufacture.

Tanks and Armored Fighting Vehicles Visual Encyclopedia is a directory of more than 1000 of the finest tanks, jeeps, trucks, tank destroyers, engineer vehicles, self-propelled artillery, and armored cars built in the last 100 years.

Arranged chronologically, the book provides a comprehensive visual guide to the development of over 1000 of the most interesting armored fighting vehicles that have been in service. Each featured vehicle is illustrated with an excellent full-color artwork in profile or 3-quarter view, showing in great detail the features and the various color schemes used for different marks or for the vehicles used in different theatres of war. The camouflage schemes are very well done. There is no scale mentioned that these color profiles are done to, but I gage that they are to 1/72nd and 1/48th approximately. There are either 2 to a page or 3 to a page throughout the book. Every so often there are larger color illustrations in about 1/32nd scale. Usually a top and a bottom view in that size. Below them is a very large color illustration that is about 1/24th scale maybe and most of these have some part of their anatomy done as cut-away, showing the interior details. The tanks that get this largerillustration treatment are very well known ones.

Illustrations are shown from 1904 until the present therefore. Each tank is accompanied by a detailed caption and specification box, listing weight, dimensions, range, armor, powerplant and performance.

This book will prove to be essential reading for enthusiasts and modelers. Highly recommended.

I purchased my copy at Barnes and Nobles. Nice to get a great book full of good profiles at a bargain price.