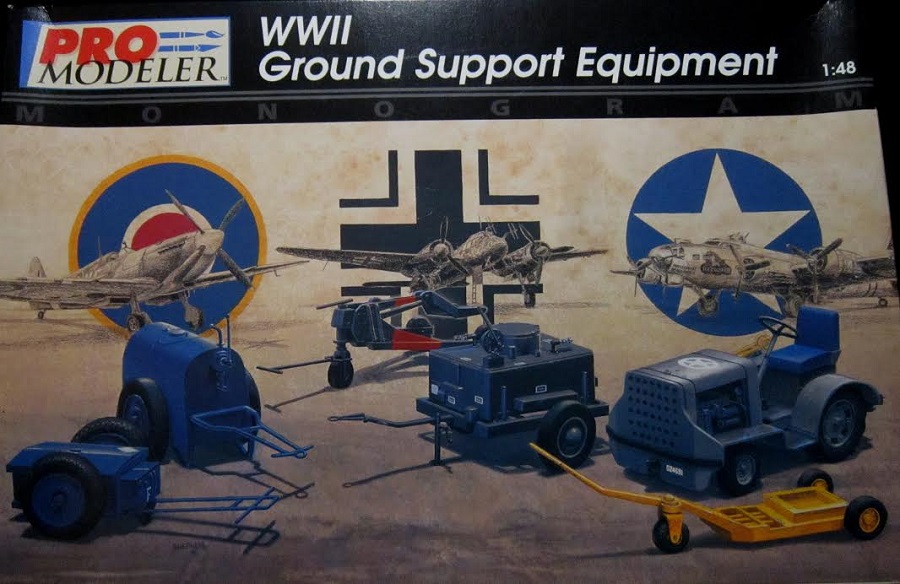 Ever since powered flight began with the Wright Brothers in 1903, aircraft have required supporting ground equipment designed for their special needs and operations. Military aircraft in particular have been supported by a wide variety of ground equipment which has become increasingly sophisticated, along with the aircraft it supports.

During WWII, the most common ground equipment included tractors to move the heavier aircraft around, starter carts to crank the large reciprocating engines, refueling carts to pump the large quantities of aviation gasoline into the aircraft, and bomb carts to transport and load ordnance on to the aircraft.

Whenever aircraft were parked on the ground, these items of equipment were in almost constant use as aircraft were moved around the airfield to be serviced, rearmed, and refueled for their next combat mission.

This Pro-Modeler kit provides six pieces of typical WWII ground equipment. Two pieces each have been selected from the United States, Great Britain and Germany for use in dioramas with ProModeler and other aircraft kits.

Figures are included however with each Pro-Modeler aircraft kits, and these, along with this ground equipment, can be placed around the aircraft to add both life and action to a modeling display.
​THE KIT:

It came in a shrink-wrapped tray and lid type box. The box is way too big for the parts in it. There is a large letter L void around the trees. I get the impression that the box was made to just fit the instruction book. If it had been folded a few times over.

All the contents could have been in a much smaller box. 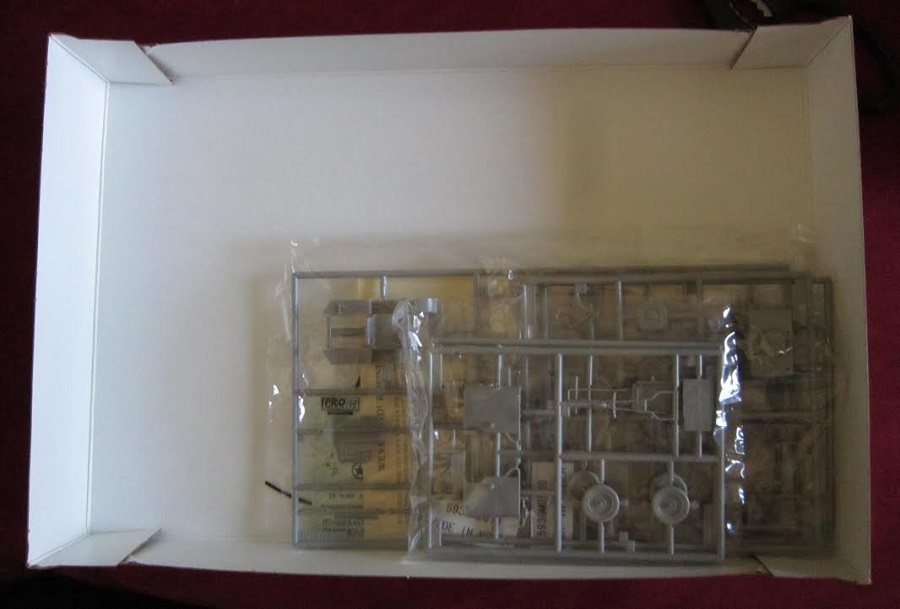 One side panel begins with Revell-Monogram’s web address and phone number, followed by a list of suggested paint colors to use to complete the models. It is said that paint and cement are not included in the kit and the kit contains 59 parts, instructions and is for modelers age 12 to adults. Revell-Monogram’s street address in Morton Grove, Ill is provided.

The other side panel has color photos of the American, British and German equipment made up, followed by the history of the equipment in English and French.
​WHAT’S IN THE BOX:

Each countries equipment is in 3 sealed clear cello bags.

The trees have tabs on them with the countries name identifying the parts as being for that country. They are not alphabetized, but the parts are numbered. There are no parts trees illustrations in the instructions.

There are 2 light grey trees in each cello and each cello has a slip in it that says MADE IN KOREA. 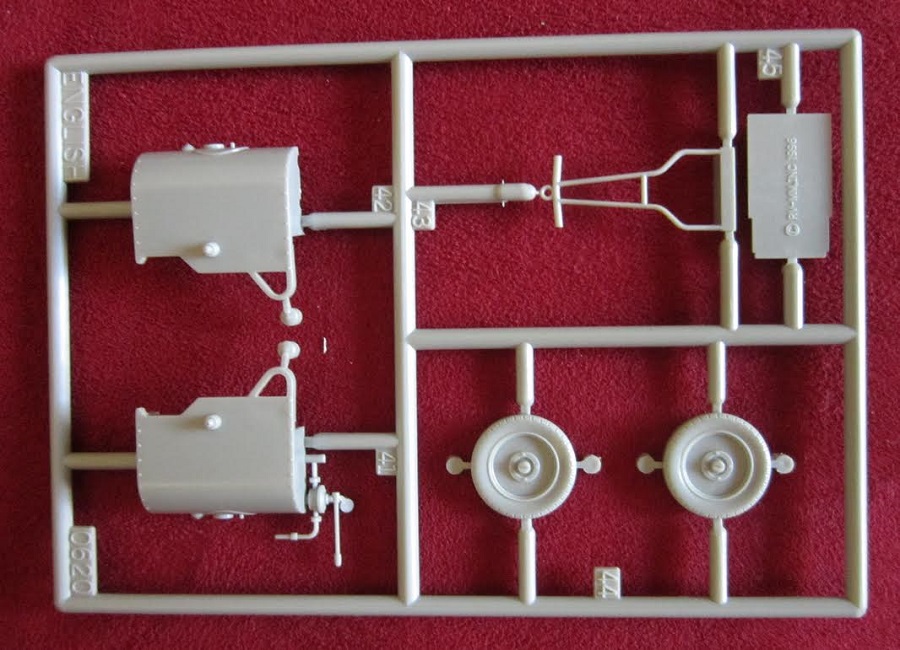 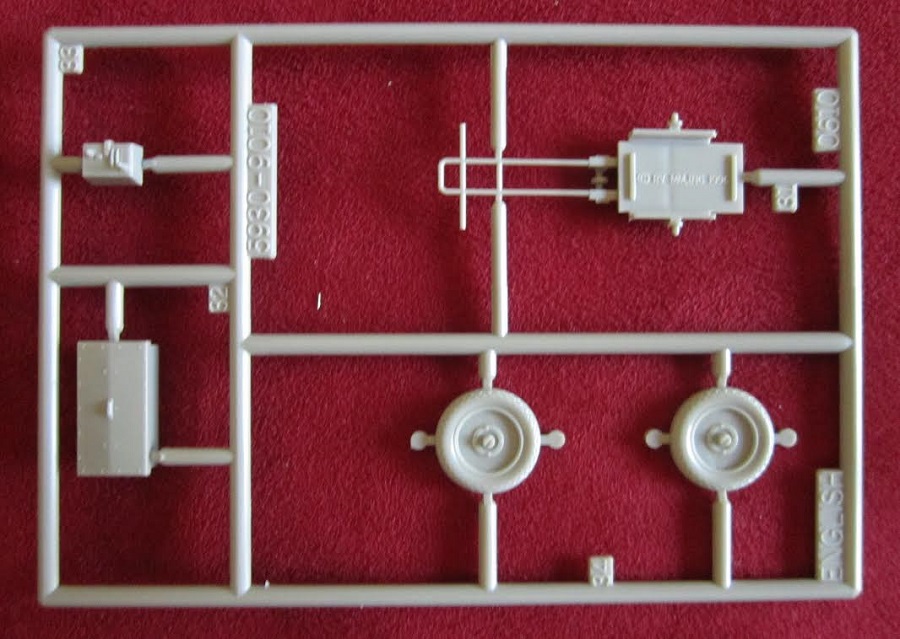 A section of the vinyl tubing is to be used with both of the above carts.
​The 1st light grey GERMAN tree holds: parts for the refueling cart (9 parts)

Another section of the vinyl tubing is to be used for it. 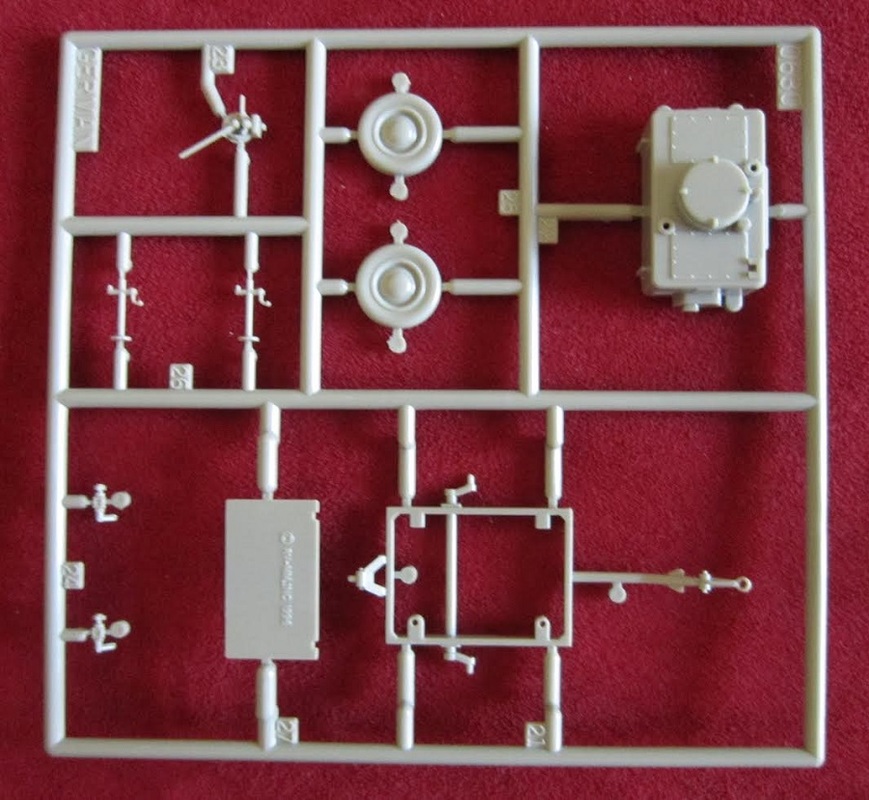 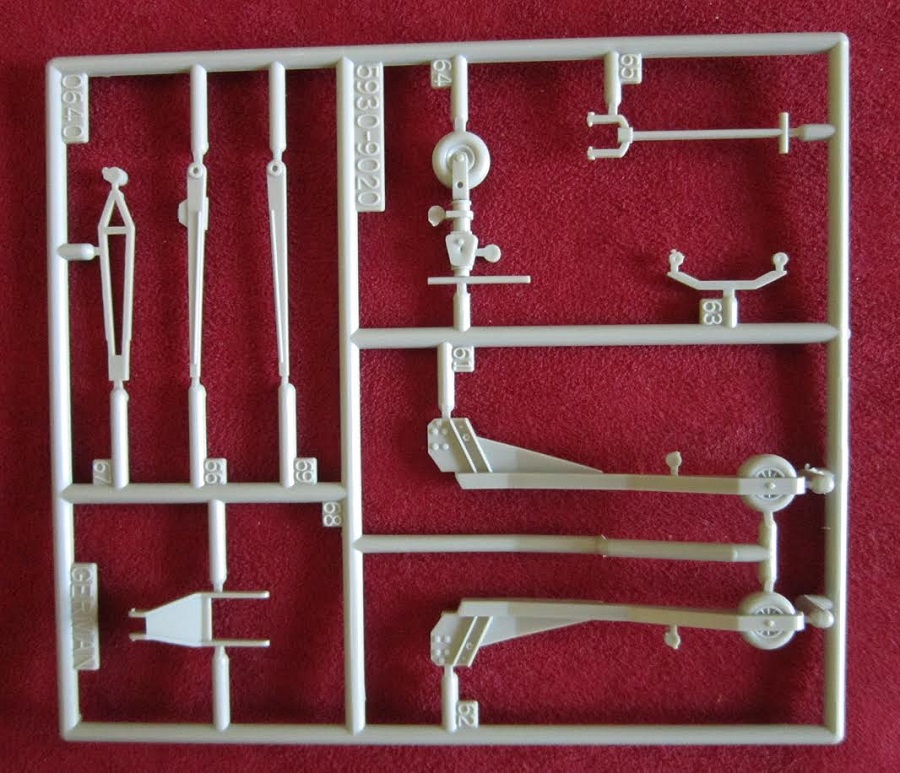 The 1st light grey AMERICAN tree is the largest of the 2 trees for their equipment. This tree holds: parts for the tractor. (22 parts) 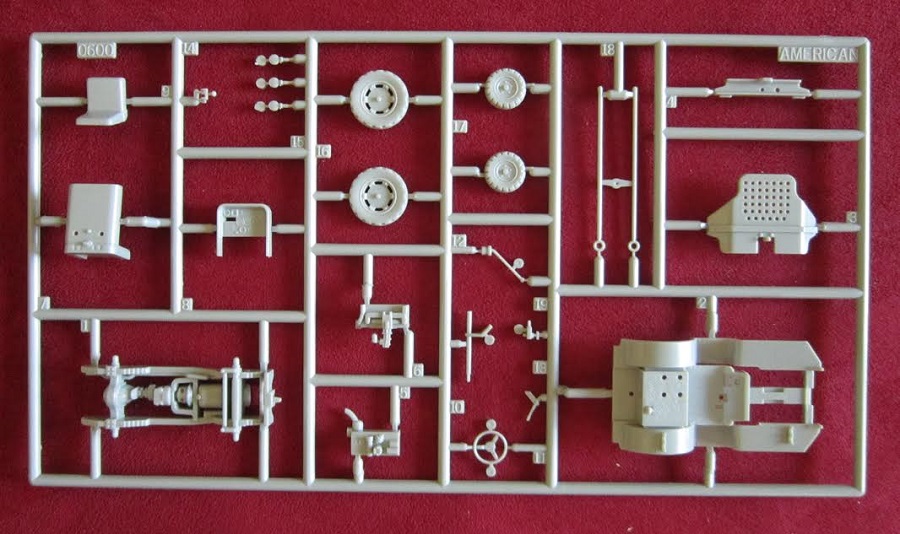 The 2nd light grey AMERICAN tree is smaller and it holds: the parts for the bomb cart (5 parts) 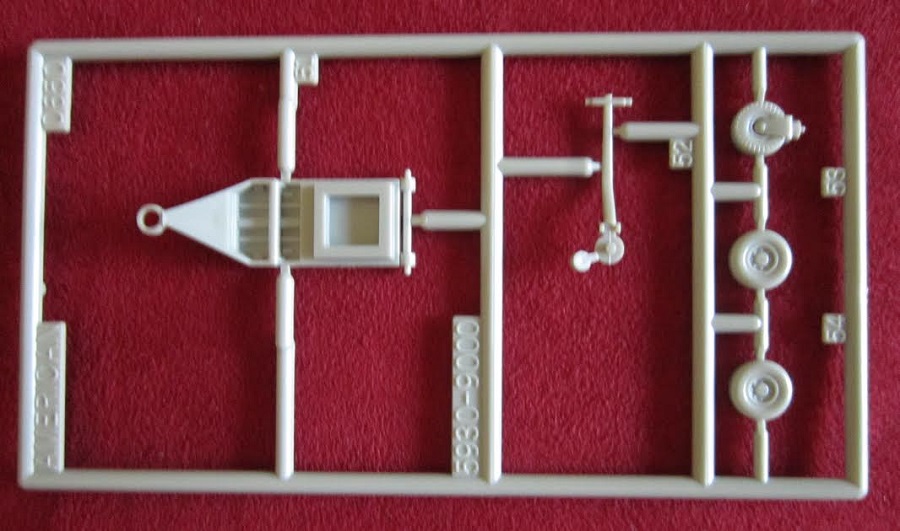 ​The black vinyl tubing is next. It is long enough to divide into 3 parts to use on the 3 equipment mentioned above. There are no clear parts in the kit, nor any figures. 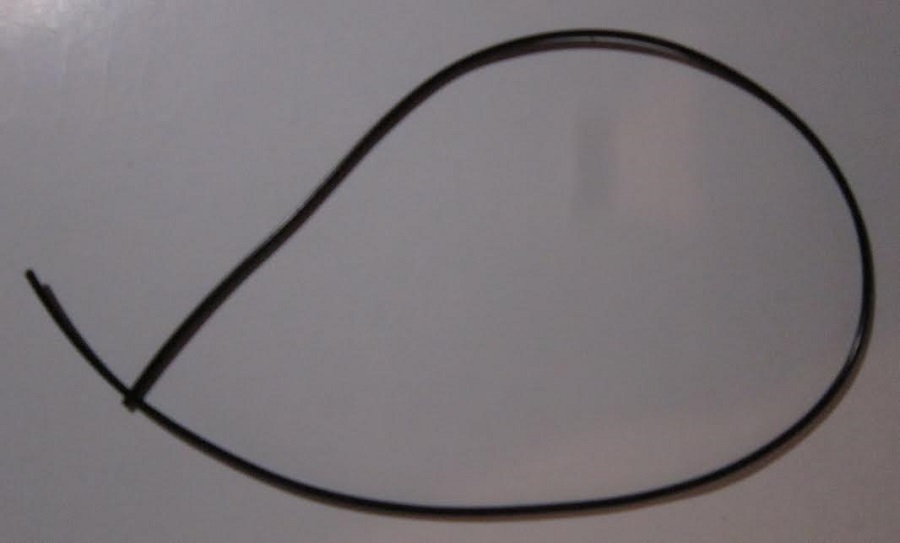 The decal sheet holds markings for the American and British equipment (mostly serial numbers), but the German just has data panels. There are dash board instruments for the American tractor and white stars in circles. 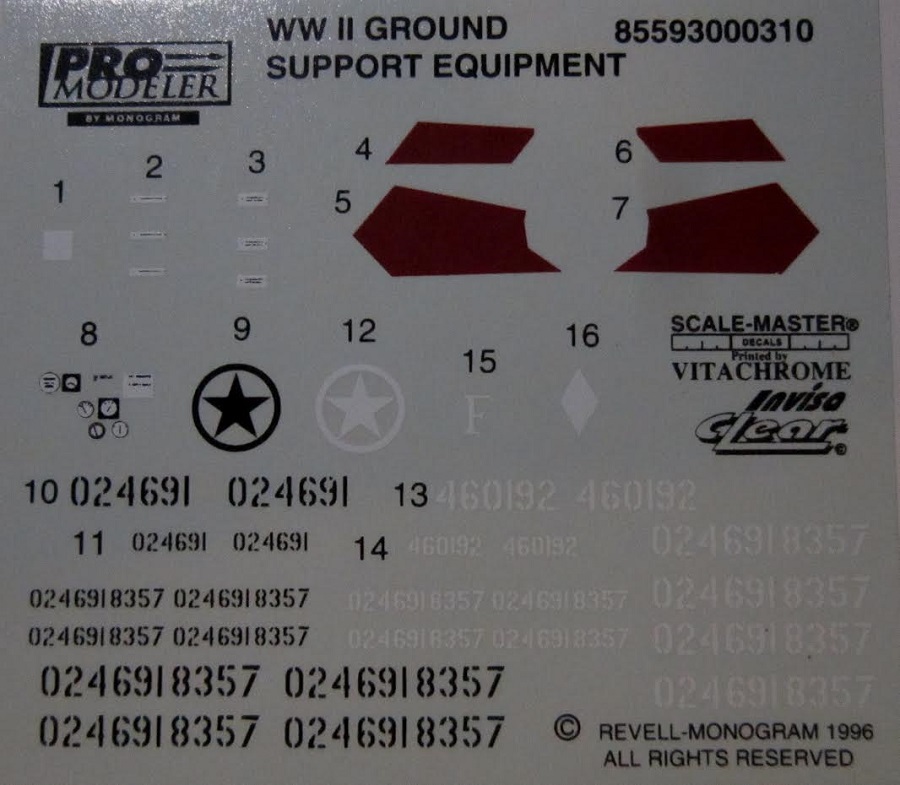 The instructions and a customer’s opinion card complete the kit’s contents.

The instructions consist of a unbound booklet of 8 pages in 8 ½” x 11” page format.

Page 1 begins with a black and white photo of all the equipments made up, followed by the history of the equipment.

The bottom of the page has Revell-Monogram Inc.’s street address in Morton Grove, ILL, the copyright date of 1996 and MADE IN U.S.A.

Page 2 begins with READ BEFORE YOU BEGIN instructions in 4 languages, including English, followed by international assembly symbol explanations, a list of paint colors suggested to use, a 1-800 phone number to call to get modeling tips and Revell-Monogram’s street address again.

Page 3 has the instructions for the British equipment. Included in these assembly drawings are black and white photos of the actual 2 carts. A lot of text takes you step by step through the assemblies.

Page 4 has the instructions for the German refueling cart, with a black and white photo of an actual cart. Again text walks you through the assembly.

Page 5 has the instructions for the American tractor, text walks you through the assembly here too.

Page 7 is the assembly instructions for the German bomb cart. A lot of text steers you through the assembly of this.

Page 8 begins with decal application instructions, followed by a side view of the German bomb cart and a 3-view of the refueling cart. Both vehicles are to be painted RLM 02 gray, FS 16185.

Next is a side view of the British refueling cart and a 3-view of their started cart. Both vehicles are be painted PRU blue, FS 35164.

This equipment will really be useful for making an airfield diorama for either of these 3 countries. However, some figures would have been nice to have been included that are in poses that fit the equipment.

Kit was courtesy of my wallet back in 1990’s at my local hobby shop.