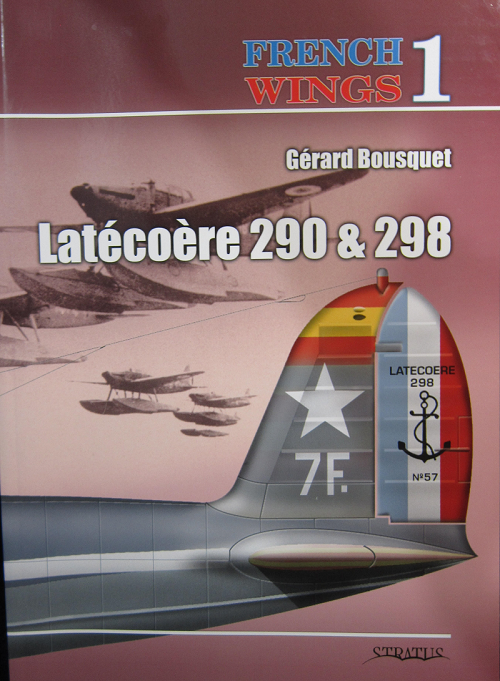 The Latécoère 290 was a torpedo bomber float plane produced in France during the 1930s. Designed by Latécoère in response to an Aéronavale specification for such an aircraft, the 290 was based on its successful Laté 28.3 mail plane.
It was a conventional high-wing, strut-braced monoplane that carried a single torpedo externally under the fuselage.

It was tested first with undercarriage installed and then on its intended floats; following which a batch of 20 was ordered by the navy, followed by an order for 10 more.

These entered service in 1934, equipping two torpedo squadrons. All were relegated to training duties in early 1939, but four were returned to active service for coastal anti-submarine duties at the outbreak of the Second World War.

The Latécoère 298 (sometimes abridged to Laté 298) was a French seaplane that served during World War II. It was designed primarily as a torpedo bomber, but served also as a dive bomber against land and naval targets, and as a maritime reconnaissance aircraft.

Of a sturdy and reliable construction and possessing good maneuverability, it was France's most successful military seaplane, and served throughout the war in various guises.
​SPECIFICATIONS:

The cover art shows a group of 6 Latecoere's with a color illustration of just the tail of a Latecoere 298 in the foreground. This aircraft is shown in a full color profile on page 45 of the book.

It is overall grey with a white stripe down the length of the fuselage. The tip of the rudder and underneath the nose has red, yellow, red Vichy markings. The rudder flap has the French vertical tri-colors blue, white, red on it with LATECOERE 298 over a anchor and no. 57 in black. Under the Vichy marks on the front on the rudder is a white star over a white 7F.

This was the aircraft of Capitaine de Corvette. Suquet, commander of 7F. It has the combined insignia of units 5T & 6T on its nose.

The book contains 135 black and white wartime photos, 31 color profiles
(including 2 on the back cover), three color 2-views, and a 4-view.

There is one color photo of a real Latecoere in flight and color illustrations of 10 unit insignia.

This is a neat book about these floatplanes. It will be of great interest to aircraft historians and modelers alike.

I want to thank Casemate publishing,  the N.American distributor of MMP books for this review sample and Roger Wallsgrove, Editor-in-Chief of MMP Publishing and the folks at Stratus too.

All MMP titles can be viewed on the Casemate site at:
www.casematepublishing.com