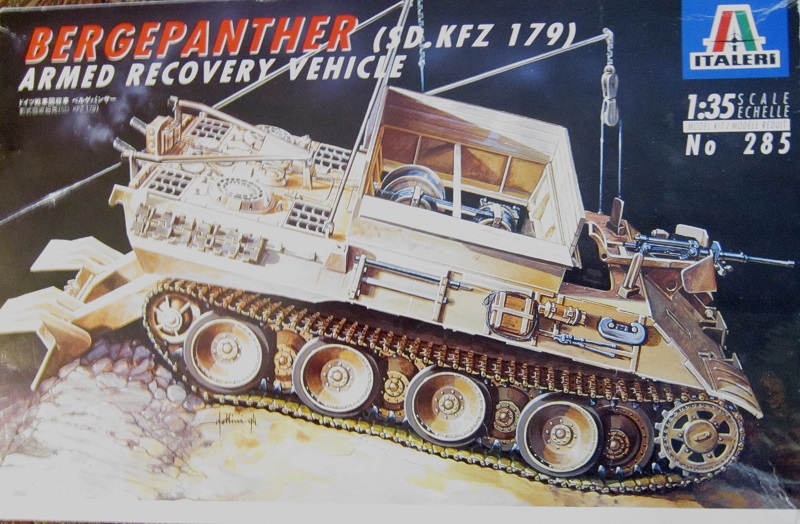 OUT OF PRODUCTION (copyright 1995)
HISTORY:

The Bergepanther was based upon the Panther tank. It was developed to furnish tank units with a powerful armored vehicle to recover heavy tanks damaged in combat or having mechanical failures. Furthermore, it was equipped with a heavy duty winch, which was useful for front line field too shop operations. Most of the Bergepanthers were built on the Ausf.D chassis.

The kit comes in a shrink wrapped tray and lid type box.

The box art shows a Bergpanther posed against a black background (maybe at night ?).  It is on a slope and has it’s ground spade lowered and a cable deployed out the rear. It is overall earth yellow. No markings are shown on it.

One side panel has one paragraph histories of the Bergpanther in 8 languages that are each labeled with color illustrations of the flags of the countries that speak those languages (including English).

The other side panel continues with the one paragraph histories in 3 more languages marked with the flags. This is followed by a list of Model Master paint colors and a warning that the kit is not suitable for children under 3 due to sharp parts in 10 languages (including English) The copyright of the kit is 1995. The kit is intended for modelers over 10. Italeri’s street address in Italy is provided.

The kit contains three light tan trees of parts, 2 silver colored vinyl rubber-band  type runs of tracks, the decal sheet and the instructions. Parts are all loose and not cello-bagged.

The instructions consist of a large single sheet that accordion folds out into ten pages in 7” x 12” page format. There is a small sheet printed on both sides with IMPORTANT INFORMATION CONCERNING THIS KIT in 20 languages, including English.

Page one begins with the history of the vehicle in ten languages, including English. The bottom of the page gives decal application instructions.

Page two begins with “attention – useful advice”, again in the same ten languages. This is followed by parts tree illustrations of two of the three parts trees and the vinyl tracks.

Page three begins with the third parts tree illustration and a couple of international assembly symbol explanations. This is followed by a list of Model Master brand paint colors suggested for use in painting and camouflaging the model. The bottom of the page gives the first two assembly steps.

Pages four through the top of page ten give the balance of a total of 31 assembly steps. The bottom of page ten gives a lone 4-view marking and painting illustration of a Bergepanther in overall tan paint scheme with the German cross on the hull sides and small white number “02” on the right rear fender. The decal sheet gives very small German crosses and small white numerals 0 through 9. No division or tactical signs are given.

The ground anchor spade, at the rear of the Bergepanther and the V-shaped towing bar can be shown deployed or stored - your choice. A plastic cable (part no. 139b) and the cables molded into the winch drum would be better replaced with some string that looks like cable in 1/35th scale. 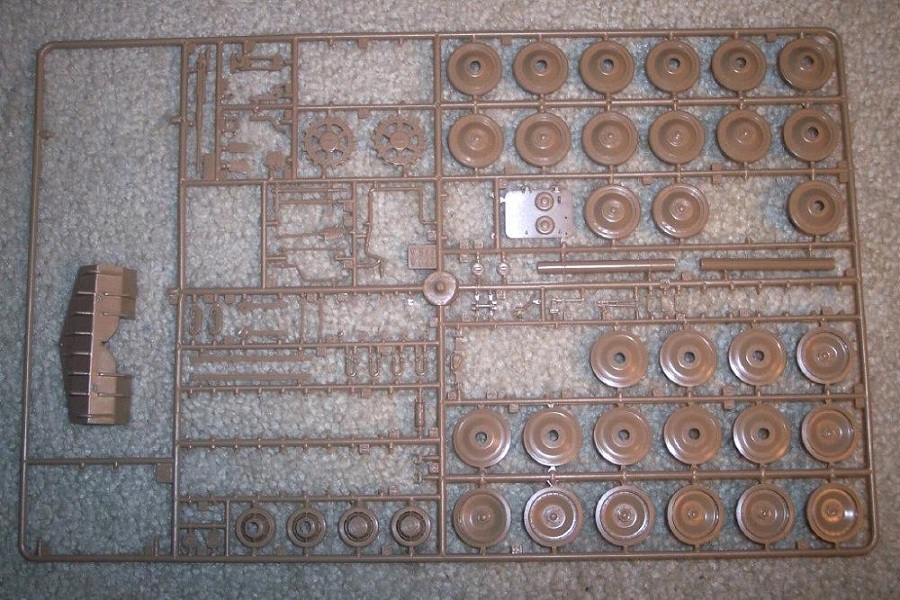 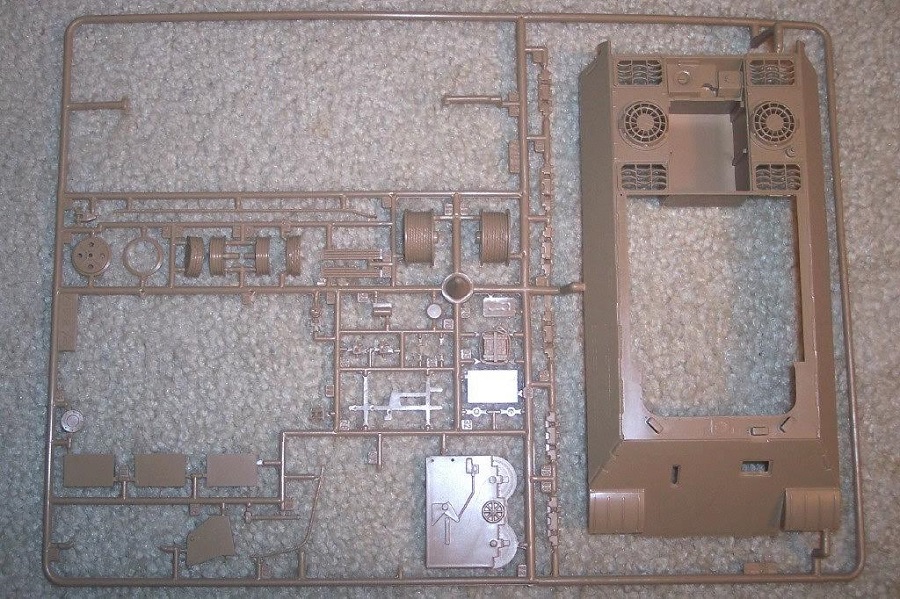 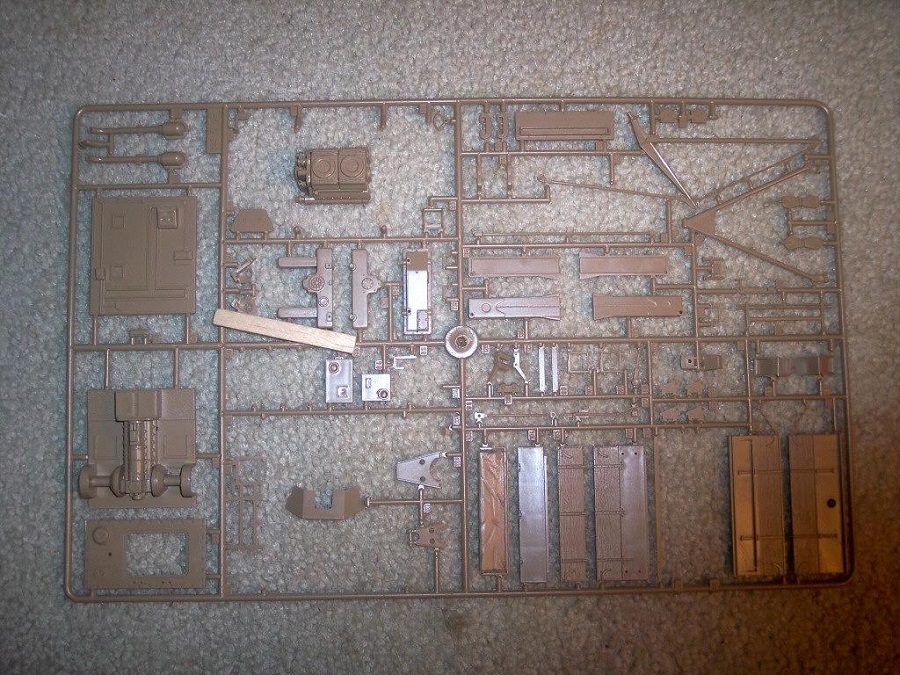 There are no crew figures provided, nor any clear parts. In a open-topped vehicle like this it cries out for some figures.

There are two identical trees of steel colored vinyl treads. There are two lengths of tracks & six spares per tree. These are of the type of vinyl treads that have to be welded with a hot screwdriver. They are not of the newer glueable vinyl tracks seen in some kits. You will have to do four welds per track to put them together, and then hope the welds will hold. I have found, in the past, that just one weld per track run sometimes parts company later. Modelers will probably want to invest in some after-market individual tracks for this kit. On the plus side, detail on the inside and outside of these vinyl tracks is very good. 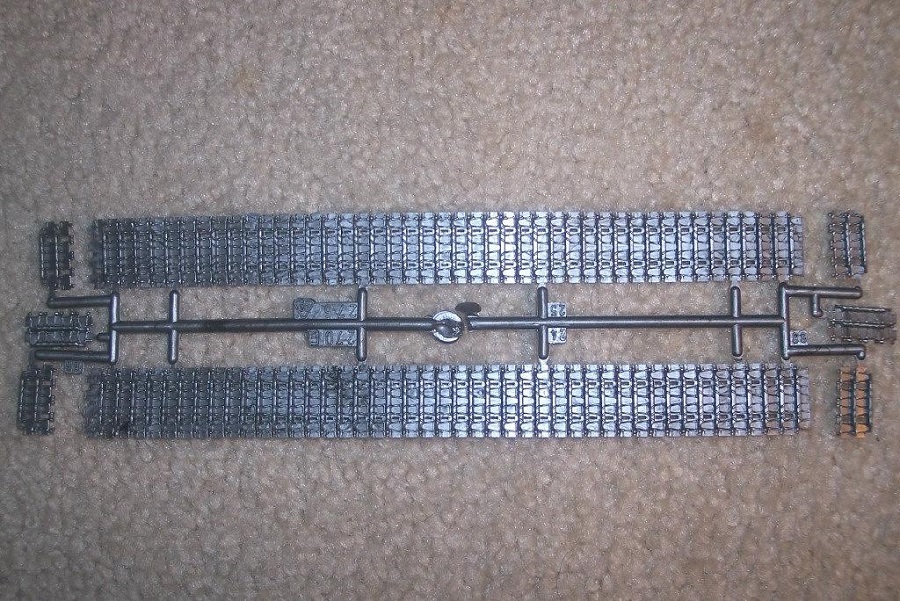 The kit has some nice detail inside the driver’s compartment. However, the steering wheel is totally WRONG. Panther tanks were steered with levers. So some scratch building in that respect is needed.

I started to assemble this kit and then set it on the back burner for a couple of years. Cannot remember what distracted me, but I am going to get back to it and finish it.

Because I have partially assembled this model, you will see voids in the pictures of the parts trees. I apologize for that. 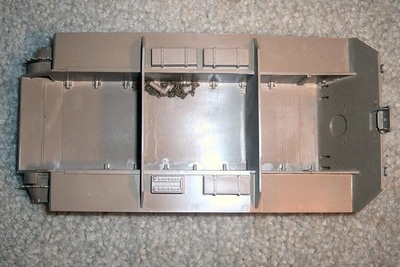 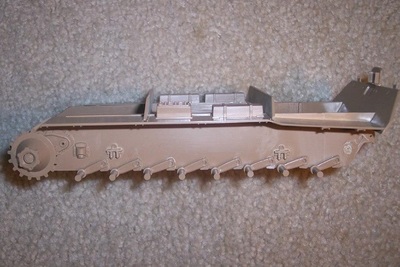 In steps 1 & 2 I have assembled the final drive transfer housings to the hull, added the hull top extension plates and rear wall, some tow rings and the suspension rubber dampers.

In steps 3 & 4 I assembled the suspension arms and left the road wheels off until the rubber on them is painted.

I then jumped to step & and glued the 4 storage bins onto the fenders.

I again jumped to step 9 and glued the two bulkheads inside the hull.

I then stopped assembly.

I purchased the Eduard PE set designed specifically for this Italeri kit. It is set no. 35119. It provides many detail parts, engine air intake screens and a photo-negative part with the dash board instrument faces on it.

I have an old Military Modeler magazine (now long out of business) from October 1989. It has a build article in it for a scratch-built Bergpanther that was cobbled together form 2 or more kits and a build review off the web that I copied in 1997. That review was of this Italeri kit. I also purchased some model railroad metal chain to replace the plastic ones in this kit. 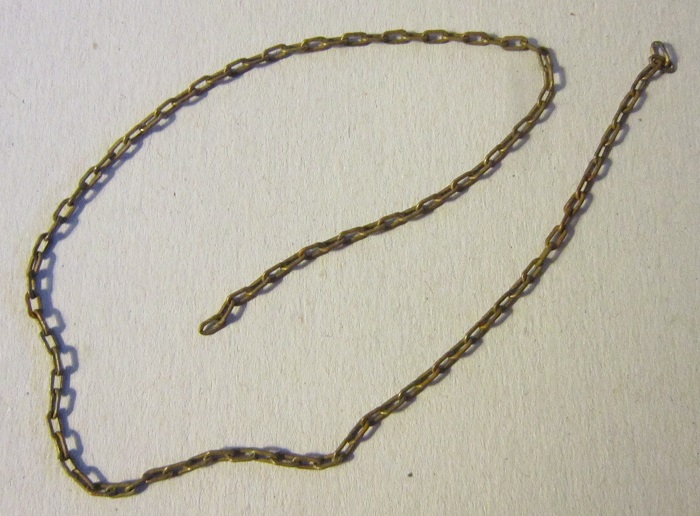 Highly recommended. This kit was courtesy of my wallet.