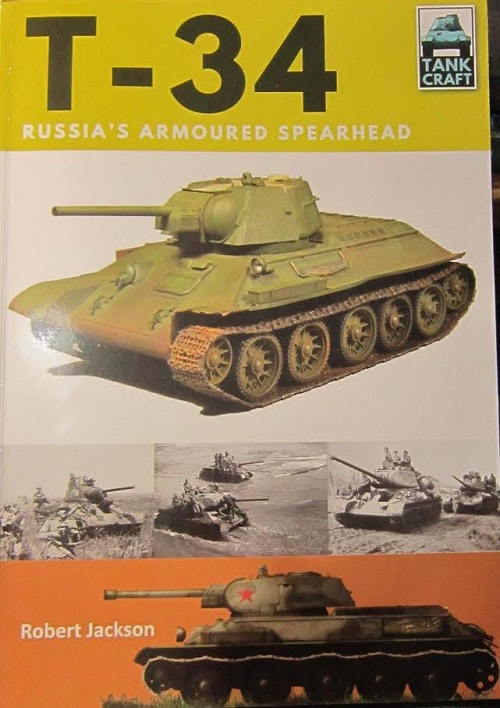 MSRP: $22.95
​Von Kleist, one of Hitler's best panzer leaders, described the T-34 as "The finest tank in the world". There could have been no finer accolade from a commander whose panzer divisions experienced the full fury of its devastating attacks on the Eastern Front.

Without a doubt, the T-34 was one of the best tanks of all time, and in this volume in the TankCraft series Robert Jackson tells its story. He describes its conception in the 1930's, its development during WWII, and its postwar deployment to over thirty countries within the Soviet sphere of influence.

His book is an excellent reference work for the modeler, providing details of available kits, together with artworks showing the color schemes applied to the T-34 by its operators throughout the world.

Photographs, many in color, illustrate the T-34 in action and there is a section dealing with the range of armored vehicles that were built using the T-34 chassis.
Robert Jackson's introduction to the T-34 is necessary reading for tank enthusiasts and tank modelers alike.

Pen & Sword Publishing is based in the U.K.

There are several shots of Soviet individuals and German ones.

The book has 16 color profile illustrations showing various turret markings. There are wartime color photos between each two profiles.

There are two color profiles of T-34's in captured German markings and one in Egyptian Army markings.

The first showcased built up T-34 model is by modeler Brian Richardson using the Trumpeter 1/16th scale kit. There are 20 color walk-around photos of his model.

The second showcased built up T34/76 model is by modeler Philipp Gross using the ICM 1/35th scale kit with Dragon old-style tracks. There are 13 color walk-around shots of his model.

The third showcased built up T-34/76 model is by modeler Gary Riley using the Dragon kit in 1/35th scale. There are 7 color walk-around shots of it on a diorama base.

The fourth showcased buit up T-34/85 model is by modeler Dyeol Han using the Dragon 1/35th scale kit. There are 16 color walk-around photos of it.

Kits available that are shown are: the AFV Club one, Tamiya's, Academy's, Maquette's, Trumpeter's, Airfix's, Dragon's and Zvesta's.

There is a black and white wartime photo of a Ilyushin IL-2 Sturmovik aircraft and a German Henschel Hs-129B-1 and a female Soviet pilot Aleksandra Samusenko who was the only female commander of the Red Guards tank Army.

An advertisement showing Pen & Swords book Tiger I & Tiger II Tanks is shown at the back of the book.

This is one neat book and aimed at modelers. It will also interest AFV historians also. Highly recommended.

I want to thank the folks at Casemate Publishing who sent me this review sample and also the folks at Pen & Sword in the UK.

All Pen & Sword titles can be seen on Casemate's web site at:
www.casematepublishing.com
or
​www.pen-and-sword.co.uk