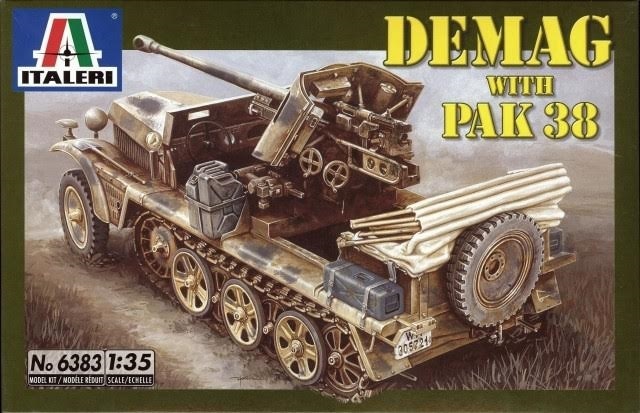 The one-ton half-track, Demag 7, was used by the German Army all over Europe and North Africa during WWII. Due to its excellent cross-country characteristics and its sturdy design, the D7 went through a number of modifications to accommodate anti-aircraft and anti-tank guns which were needed throughout the war.

This version, equipped with a Pak 38 50mm gun, was one of the first to be used on the Eastern Front. The engine and the driver's compartment were protected by armor plates which were generally field conversions.

Italeri is a older prolific model company based in Italy. They manufacture all manner of model subjects in the popular scales.

This kit came in a shrink-wrapped tray and lid type box. The tray was flimsy and is badly crushed in my kit. It did not stand the weight of my other kits on top of it in my stash.

The box art shows a Demag with a PAK 38 anti-tank gun mounted on it  It is in a base of earth yellow with dark green and red-brown splotches over it. The white license plate on the left rear has the black number WH 305721 on it.

One side panel of the box says "This kit contains an unassembled plastic model kit. Cement and paint needed to finish model as shown are not included. Multilingual instruction sheet with drawings and decal sheet included. Suitable for children age 10 and over". This is said in 6 languages, including English. Followed by "Not suitable for children under 3 years. May contain small parts with sharp points". Again in the 6 languages.

The kit was made in Italy and Italeri's street address there is provided, along with their web address. The copyright of the kit is 2003.

This is followed by a listing of Model Master brand hobby paints suggested to use to finish the model and 2 color photos showing the side and front of the model made up with the license plate on the front having the number WH 394713.

The other side panel of the box has a one paragraph history of the Demag in 6 languages each labeled with a color illustration of the flag of the country that speaks that language, including English. This is followed by a color photo showing the model made up from above.

The tray to this kit is badly crushed and did not stand up very well to the weight of other kits I piled on top of it in my stash.
​WHAT'S IN THE BOX:

Inside the box are five panzer-grey colored plastic trees of parts, the decal sheet, and the instructions.

Parts trees are NOT cello bagged. 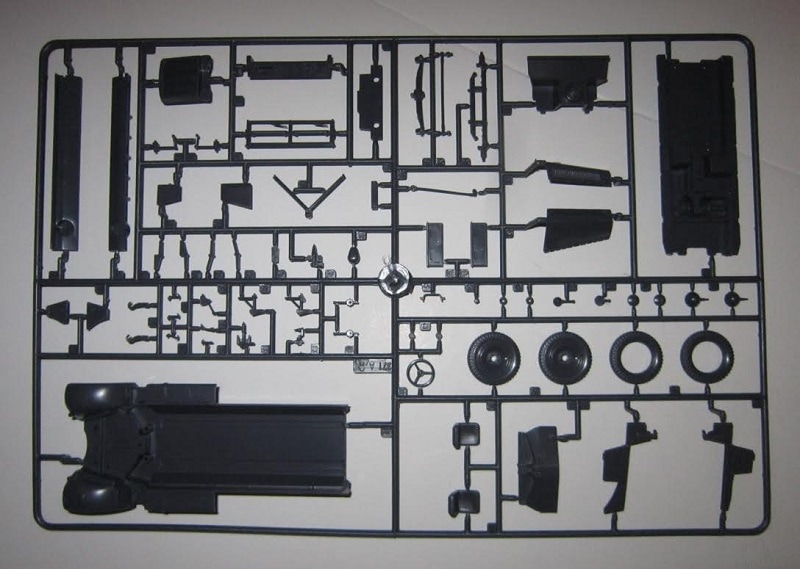 ​ One part on this tree is shaded out in the parts trees illustrations as being excess and not needed to complete the kit. It is the windshield frame for the type of windshield with glass panels. However, in this kit there is an armored plate where the windshield goes with peep slots in it. There is no clear parts in the kit anyway.
​The first tree of parts for the Pak 38 is also lettered as A on the instructions, but not on the parts tree. So, refer to the parts tree drawing for this on the plans. It holds: the inside shield, elevation and traverse wheels, sides and cradle parts (20 parts). 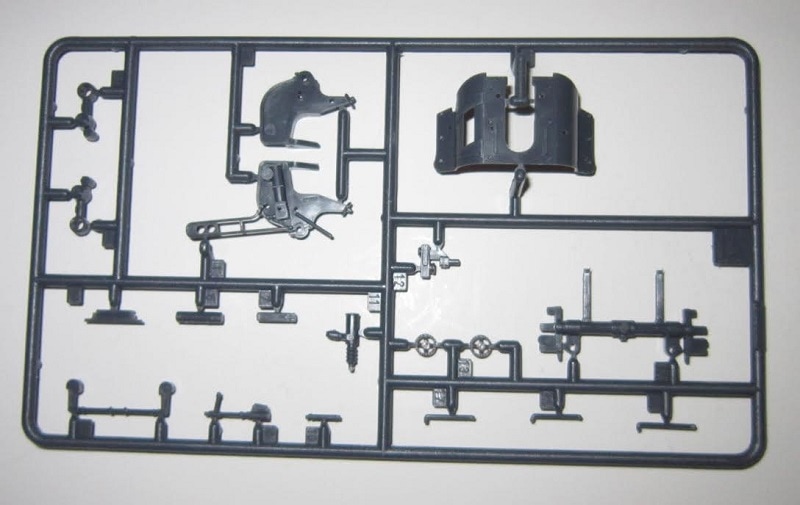 ​The second panzer-grey , and final parts tree for the Pak 38 is lettered as B on the instructions, but - again - not on the tree. It holds: the outside shield, the gun barrel, the barrel trough, rounds of two types of ammo, an ammo case etc. (28 parts) 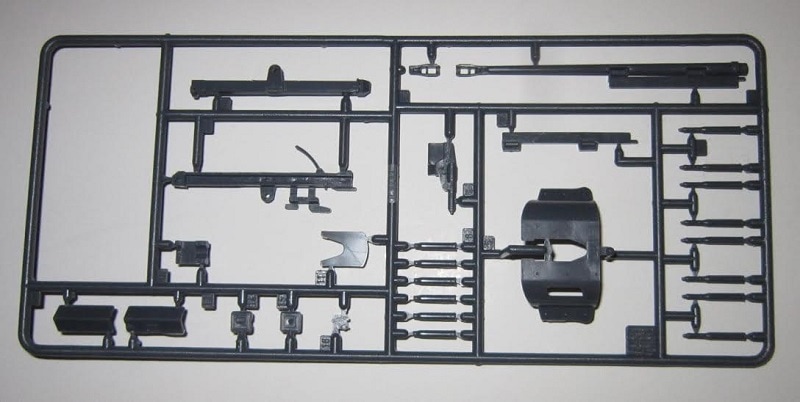 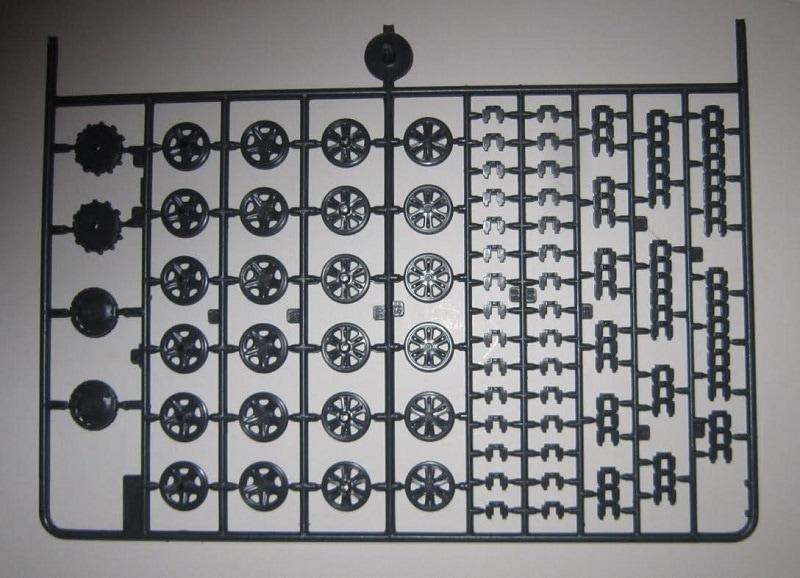 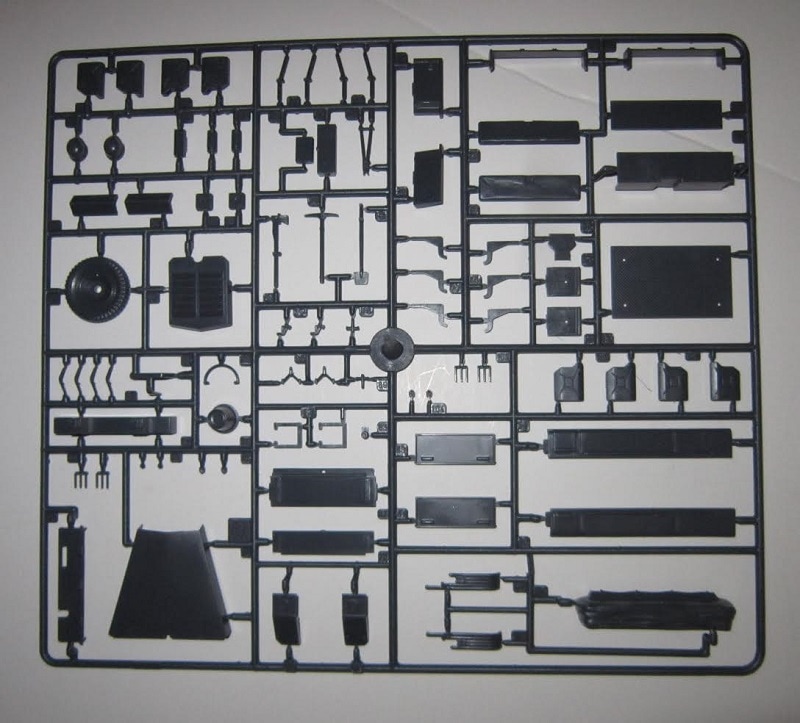 ​The instructions are a single large sheet that accordion-folds out into 10 pages in 13" x 7 1/" page format.

Page one of the instructions gives the vehicle's history in six different languages, including English. The bottom of the page gives some general warnings in the same six languages.
Page two begins with parts tree drawings of the parts for the vehicle only and explanations of the alphabet letters, used throughout the assembly drawings, that indicate what colors to use. The bottom of the page gives the first of 14 total assembly steps for just the vehicle itself.

The bottom of page no. 7 shows the two parts tree drawings of parts for the Pak 38 only and then re-starts assembly steps of 1 through 4 total for just the Pak itself, with the 4th assembly showing the mating of the Pak to the vehicle. Page 9 of the instructions gives us three different paint and markings schemes:

An unknown unit, Russia 1944.
A vehicle with the 57th Infantry Division, Russia 1942.
And another vehicle of a second unknown Unit* Russian winter 1941/42. (*The division marking for this one is a large white letter "G" which I know indicates the Guderian Kampfgruppe).

The tactical markings are a wedge shape on wheels, which indicates an anti-tank motorized unit.
A search of some good books, on the subject of this vehicle, would probably show some other markings and theatres that this vehicle served in. So, you probably would not be locked in on the Russian Front only for markings.
​The 10th page of the instructions gives some general information, in no less than 20 different languages, concerning the kit. This is followed by a mail in coupon, to use for obtaining any missing parts from Italeri.
The decal sheet for the above versions. 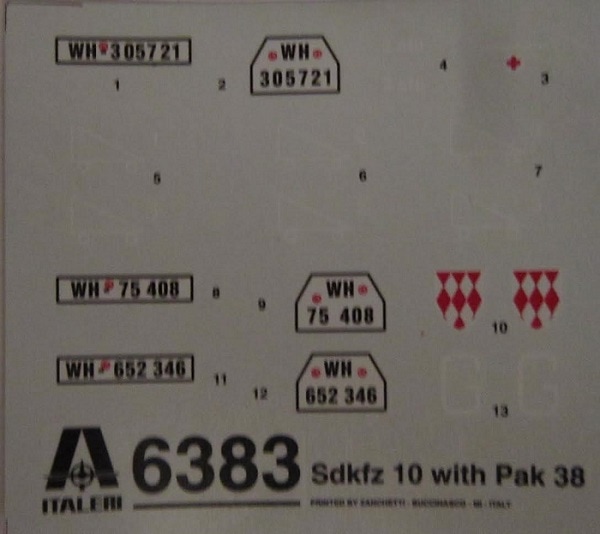 This kit is very well molded and free of any flash. It looks like it will really make up nicely into a welcome addition to any armor modelers display shelf.

The only negative I have about this kit is that there are no figures included. It sorely needs at least a driver figure and a gun crew would really be welcome.

Otherwise highly recommended.
​I bought my kit at my local hobby shop years ago