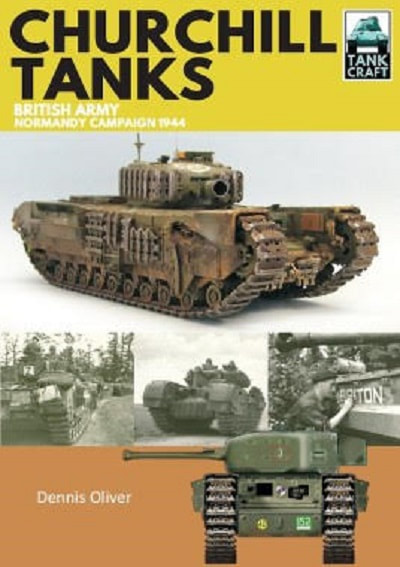 This new book has just been released this year. Copyright is 2017.

Unit histories of the Churchill battalions that operated on the Western Front during 1944-1945.

Technical analysis and lists of modifications.

Color and black and white photographs of model kits in available scales.

The tank first saw action in 1942 and the basic design was constantly re-worked and up-gunned, culminating in the Mark VII version, which was capable of taking on the heaviest German Tanks.
The Churchill was also one of the most versatile armoured vehicles of the Second World War, being converted to many specialist roles, including flame-thrower, bridge-layer and armoured recovery vehicle,.

In his fourth book in the Tank Craft series, Dennis Oliver uses archive photographs and theroughly researched, vividly presented color profiles to tell the story of these iconic British tanks.

As readers have come to expect from the Tank Craft series, the large full color section of this book features available model kits and accessories as well as aftermarket products.

In addition to the color profiles there is  gallery of expetly constructed and painted models. A seperate section explains technical details and production modifications giving the modeller ll the information and knowledge required to recreate an authentic reproduction of one of the tanks that contributed so much to the British effort in the battles for Western Europe.

Dennis Oliver is the author of over twenty works on the Second World War armoured vehicles, including "British Armour in North-West Europe", "Codename Swallow", "British Sherman Tanks at Alamein", "The New Breed" and "Jungle Armour".

The front cover of the book shows at the top a Churchill Mk. IV AVRE built and painted by modeller Marcos Serra in 1/35th Scale.

In the center, left to right, is a Churchill VII of the 107th RAC, photographed in Normandy in mid-July 1944. A Churchill Mk. IV also of the 107th RAC. A photo of trooper McGuinnes of B Squadron putting the finishing touches to his tank's name.

At the bottom of the page is a head-on view of a Mk. IV.

The back cover, top to bottom, shows a photo of a Churchill Mk. VII of the 3rd Scots Guards Armoured Brigade photographed in April 1945.

A Churchill VII Crocodile flame-thrower of A Squadron, 141st RAC, photographed in Germany in 1945. When the regiment was attached to the 79th Armoured Division, this tank replaced the original tank nicknamed "Stallion" which was lost in Normandy.

There are color photos of a Mk. IV built by Marcos Serra, using the AFV Club kit.

A Mk. IV AVRE built by Sheng Hui using the AFV Club kit. He owns an after-market PE company and used his products on his model.

Tamiya's kits box arts are show and photos of their Mk. VII made up.

7 walk around photos of Mk. III and the decal sheet.

3 box arts of DML Dragon Churchill variants, a decal sheet and 3 walk around shots of the kits made up.

A shot of Airfix's Crocodile box art and their bridge-layer kit made up.

The box art of Matchbox and Revells Churchill kits.

The box art and 2 photos of Hasegawa's Mk. I made up.

A box art of an unknown version of Churchill by Plastic Soldier in 1/72nd scale.

A 3-view of brass parts by RB Model.

A 2-view of Armoury Model Group's resin and PE Churchill made up in 1/73rd scale.

A 6-view of Eduard accessories.

A 4-view of Voyager accessories.

A 20-view of Resicast accessories.

A 4-view of after-market tracks.

A 6-view of after-market decal sheets.

The last pages of the book show the cover arts of 5 other AFV books that Pen & Sword publish:

Images of War, British Tanks in the Second World War

Images of War, Armoured Warfare in the Battle for Normandy

This is one neat book. It will be of great interest to AFV modellers as well as historians.

I want to thank the folks at Casemate Publishing, the North American distributor of Pen & Sword books for this review sample and Pen & Sword also.

A full list of Pen & Sword titles can be found on the Casemate site at:
www.casematepublishing.com