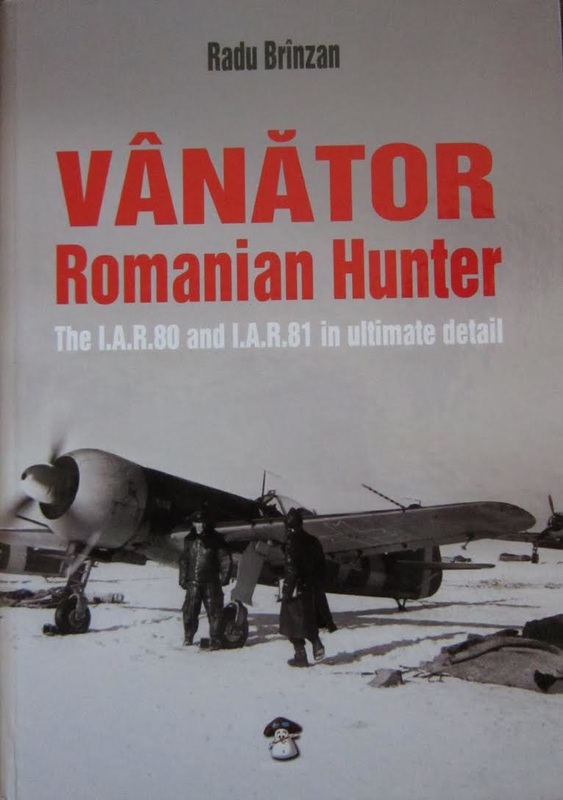 The IAR 80 was a Romanian World War II low-wing, monoplane, all-metal monocoque fighter and ground-attack aircraft. When it first flew, in 1939, it was comparable to contemporary designs such as the German Messerschmitt Bf 109B, the British Hawker Hurricane Mk.I, and the American Curtiss P-40B/Tomahawk Mk.I and superior to the Dutch Fokker D.XXI and Polish PZL P.24. Production problems and lack of available armament delayed entry of the IAR 80 into service until 1941. It remained in front-line use until 1944.

Mushroom Model Publications is based in the U.K. All their books are published by their associate Stratus in Sandomierz, Poland in English. Stratus also does their own line of books in both Polish and English.

I looked up the word VANATOR  on a web site that translates Polish into English to see what it means. I came up with HUNTER, SPORTSMAN, POACHER, HUNTSMAN and FORAGER.

It is a detailed and comprehensive illustrated technical history of the I.A.R. 80 and I.A.R. 81 – Romanian WWII fighter and ground-attack aircraft. This elegant, but little known aircraft was the mainstay of the Romanian Air Force’s fighter arm throughout WWII. It was involved in fighting against both the Allies and then against the Axis. It was heavily involved in aerial battles against USAAF heavy bombers attacking Romanian oil fields.

The different versions of the plane are described and illustrated, all the changes in specifications and performance are recorded. There are many many drawings and data charts from the original technical manuals. Also, full dimensional details and over 400 black and white wartime photos, with a few photos of of surviving relics (just bits and pieces of these aircrafts) No full example exists anywhere. All aspects of the frame, inside and out are shown. There are a few color wartime photos and 60 color profile illustrations complete the book’s content.

There are some 1/48th scale plans included. The profiles show many colorful schemes applied to these aircrafts.

Inside the book are 2 card sheets, the size of the pages, that are printed on one side in Polish. I got curious as to what these said on them and translated the top line. It says “Cavalry in Operation and Battle”. What else is said I don’t know.

On the back cover of the book is the cover art of MMP’s book titled “IL-2 Sturmovik” (reviewed elsewhere here).

It literally shows every nut, bolt and washer of these aircraft and a modeler need not go elsewhere for info about them.

I want to thank Dr. Roger Wallsgrove, Editor-in-Chief of MMP and the folks at Casemate that sent me this book.

Casemate in Pennsylvania is the N. American distributor for MMP books and a full listing of MMP book titles can be seen on Casemate’s web site at:
http://www.casematepublishing.com