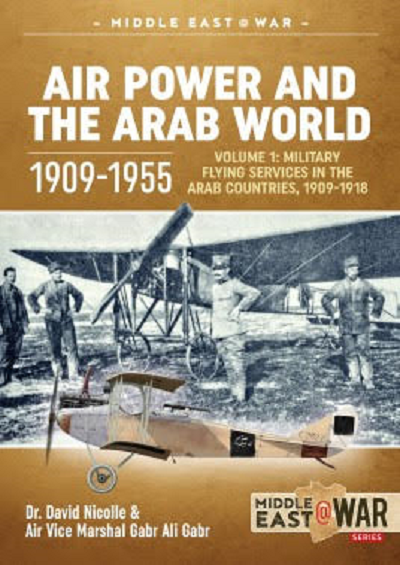 MSRP: $29.95
​At a time when multiple wars were raging across much of the Middle East, it is almost forgotten that it was Abu-al-Qusin Abbas ibn Eirnas ibn Wirdas at-Takurni-an Andalusian inventor, physician and engineer - who was the first person to undertake experiments in flying with any degree of success.

That was back in the 9th Century A.D. Night on a thousand years later the Arab World's critical strategic location made it almost inevitable that these regions would be drawn into the imperial rivalries of the leading European powers, while the Ottoman Empire struggled to maintain its existing position in the area.

This in turn meant that the first bombs to be dropped by military aircraft fell on Arab soil. Not surprisingly, as the Arab countries slowly achieved their independence, they too wanted to have air forces.

In 1948 the first such Arab air forces were thrown into battle in the ill-fated attempt to keep Palestine as a primary Arab country.

Based on decades of consistent research, but also newly available sources in both Arabic and various European languages, and richly illustrated with a wide range of authentic photography, Volume 1 of the Air Power and the Arab World, 1909-1955, mini-series is telling the story of the men and machines of the first half century of military aviation in the Arab world.

Helion and Company Ltd. is based in the UK.

The cover art shows a black and white photo of the Bleriot of Capt. Carlo Piazza at the newly established Italian aerodrome outside Tripoli. Below it is a color profile of a Rumpler C.Ia of the Ottoman 3rd Boluk (3rd Squadron), at Ma'an on what is now Southern Jordan in late March 1918. This rather well worn aeroplane had the Ottoman serial no. R 2627, which is barely visible above the black square national marking on the rudder. It was previously used by the German Luftstreitkrafte Pasha FA 33 Squadron in Palestine where its serial number had been C.2627/16.

The white Koranic inscription on the fuselage national marking was probably added when the machine was based at Madina in the Hijaz, when it was used by the 3rd Foluke in 1917 before being withdrawn to what was then called Southern Syria.

The Arab text is from verse 13 of Surah Al-Saff, the 61st chapter of the Koran and reads "Nasrun min Allah wa Fathun Qaribun" which translates to "Help from God and a speedy victory".

There are 15 color side profiles in the book:

Dr. David C. Nicolle is a British historian specialising in the military history of the Middle Ages, with special interest in the Middle East and Arab countries.
After working for BBC Arabic Service, he obtained his MA at SOAS University of London, followed by a PhD at the University of Edinburgh. He then lectured in art history at Yarmouk University in Irbid, Jordan.

Dr. Nicolle has published over 100 books about warfare ranging from roman times to the 20th century, mostly as sole author. He also co-authored the "Arab Migs" series of books which covered the history of the Arab air forces at war with Israel from 1955 to 1973.

Furthermore, he has appeared in several TV-documentaries and has published numerous articles in specialized press. This is his first installment for Helion's @ War Series.

The late Air Vice Marshal Gabr Ali Gabr, PhD (EAF), served as a pilot in a De-havilland Vampire fighter jet during the Suez War of 1956. After concluding his higher military education at the Air Warfare Institute in 1960, he served as instruction in Air Tactics at the Air Warfare Institute from 1962 -1964 and 1966 - 1967, as Staff Officer during the June 1967 Arab-Israeli War, Chief of Operational Training Branch in the period 1968 -1973, and as Chief of Operations Group during the October 1973 Arab-Israeli War.

Following a tour as instructor in the Art of Operations and Chief of the Air Force, the Chair of High War College from 1977 until 1982, and receiving his PhD at the Nasser High Academy in 1989, he moved into writing and published several books and dozens of articles on the history of air warfare in Egypt and abroad.
This is a neat book about this time in history. It will be of interest to both
modelers and military historians alike. However, I no of know existing models kits available of these aircrafts.

I sincerely thank Casemate Publishers for this review sample and the folks at Helion.

Casemate is the N. American distributor of Helion books and all their titles can be seen on Casemate's website at:
www.casematepublishers.com