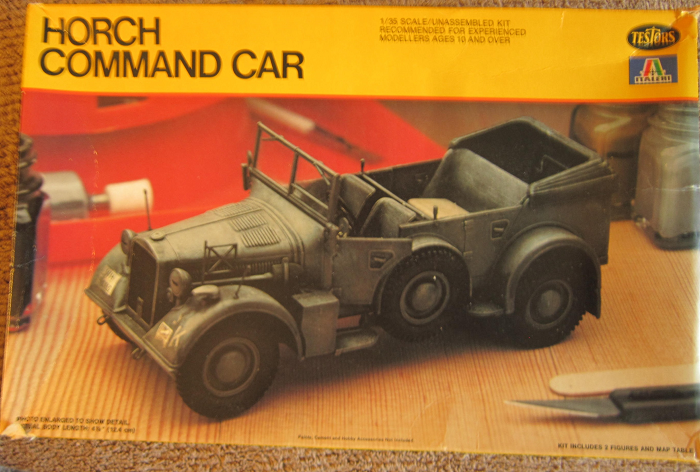 One of many classes of vehicles available to the German war machine during WWII was the personnel car. This category was broken down by engine displacement and vehicle weight into light, medium, and heavy car.

A typical medium personnel car was the Auto-Union-Horch Kfz. 15 4x4, which was used by the German army, the SS, and various Luftwaffe and naval units.
Over 12,000 were turned out between 1937 and 1943.

The Auto-Union Horch design was very sophisticated for its time, having advanced suspension and good cross-country performance. A drawback was that it was heavy, and the complex chassis and suspension required a great deal of maintenance, a problem shared by many other German vehicles of the time.

Nevertheless, these cars were used as staff cars by regimental and higher commanders, as personnel carriers, as artillery spotting vehicles, and occasionally for towing light artillery pieces.

A wooden-bodied van version, the Kfs. 17, was used as a radio van and battlefield telephone exchange.

An interesting feature of the Auto-Union-Horch design was the two side-mounted spare wheels that were mounted on freely rotating (but not powered) axles, so that they could help the car cross rough terrain by eliminating bottoming-out. Although effective, this unique feature was later dropped from the design to simplify production.

The Auto-Union-Horch saw service in all the major campaigns of the war. They were used often with thier doors removed to facilitate rapid exit in the event of strafing attacks by Allied planes.

At least two of these vehicles are known to have been captured intact by British forces and put into use as staff cars.

Testors was based in Rockford, IL. They were associated with Italeri, a old prolific model company based in Italy that manufactures all manner of model subjects in the popular scales.

The kit comes in an end-opening type box that has a inner slide-out tray.
The box art shows a color photo of the Horch made up and sitting on a modeler's work table.

One side panel has a one paragraph history of the Horch, followed by a small color profile of the car.

​The other side panel lists Testors brand glues, bottle and spray paints, hobby tools, brushes and tape, followed by a repeat of the small color side profile again.

​The bottom of the box has 8 color walk-around type photos of the model made up. Four photos show it in the box art scheme. Two show it made up overall sand colored with license no. WH-457228 on the front of the left front fender and a white tactical symbol of crossed swords and a palm-tree with swastika on the front of the right front fender. It is shown with and without its canvas top installed.

It is a Horch with the 220th Motorized Reconnaissance Unit, 164th Light Afrika Division, North Africa, 1942. 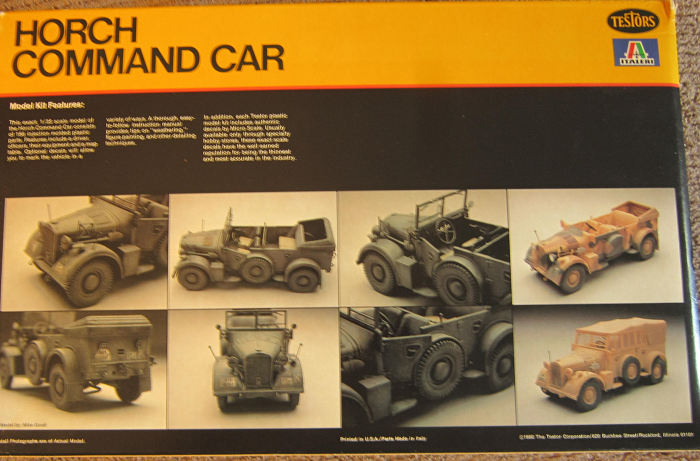 ​These two made up models were assembled by Mike Good. Kit was printed in the USA, parts made in Italy. Copyright date of the kit is 1980 and Testors street address in Rockford, IL is provided.
​WHAT'S IN THE BOX:

This kit contains 2 light-gray trees, a clear tree and black vinyl tires in a clear sealed cello bag, the decal sheet and the instructions.

Page 1 begins with a black and white photo of the model made up, over the history of the Horch, general and painting instructions.

Page 3 through 8 gives 9 assembly steps, with a lot of text.

1. A Horch that is in a wave pattern of dark yellow, dark green and dark red-brown. No markings are shown or unit mentioned.

2. Another Horch in the same pattern.

Page 11 has six 2-views, showing the front and rear of car markings.

It is with Panzer Grenadier Division "Grossdeutschland", USSR 1943.

6. A Horch in overall desert yellow. (already described above.

Page 12 has a black and white photo of the car showing it from above and a side view.

Trees are not alphabetized. Instead they are labeled with geometric symbols - a square, star, solid circle and an outlined circle. 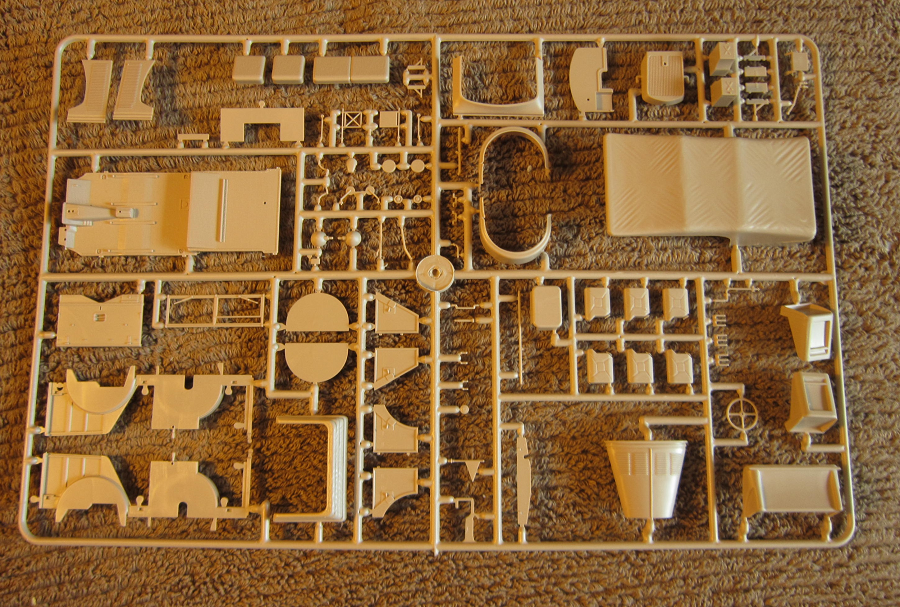 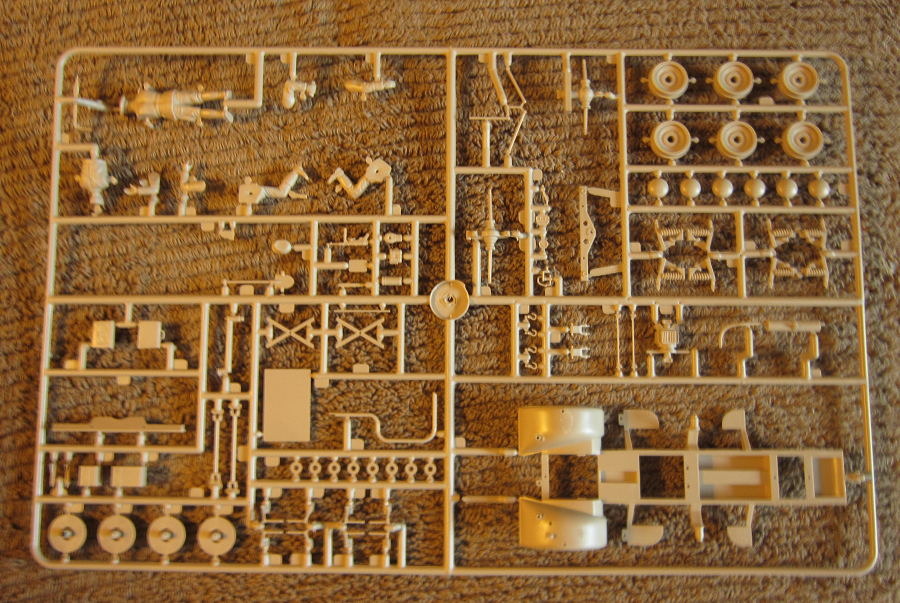 ​The black outlined circle trees is the vinyl tires (6 parts) 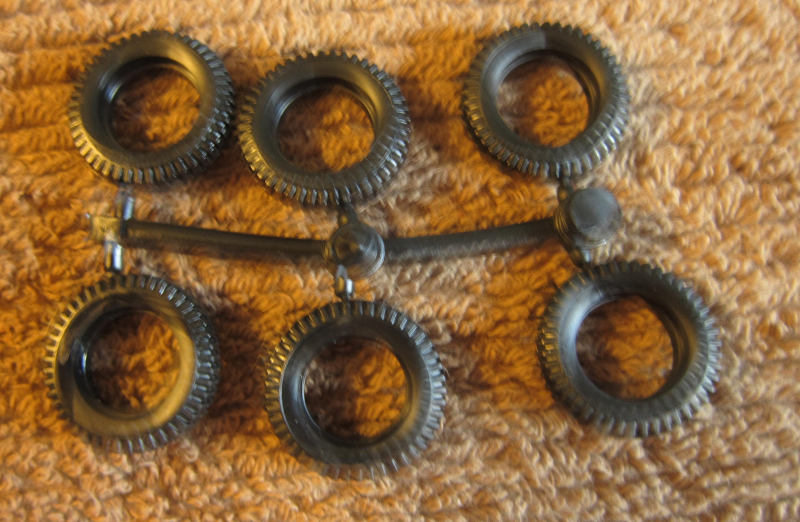 ​There are no figures included.