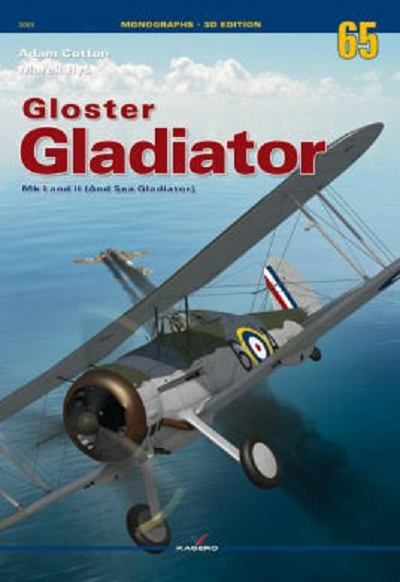 The Gloster Gladiator (or Gloster SS.37) was a British-built biplane fighter. It was used by the Royal Air Force (RAF) and the Fleet Air Arm (FAA) (as the Sea Gladiator variant) and was exported to a number of other air forces during the late 1930's.

It was the RAF's last biplane fighter aircraft and was rendered obsolete by newer monoplane designs even as it was being introduced. Though often pitted against more formidable foes during the early days of the Second World War, it acquitted itself reasonably well in combat.

The Gladiator saw action in almost all theaters during the Second World War, with a large number of air forces, some of them on the Axis side.

The RAF used it in France, Norway, Greece, the defense of Malta, the Middle East, and the brief Anglo-Iraqi War (during which the Royal Iraqi Air Force was similarly equipped). Other countries deploying the Gladiator included China against Japan, beginning in 1938.

Finland (along with Swedish volunteers) against the Soviet Union in the Winter War and the Continuation War.

Sweden as a neutral non-combatant (although Swedish volunteers fought for Finland against USSR as stated above); and Norway, Belgium, and Greece resisting Axis invasion of their respective lands.

The South African pilot Marmaduke "Pat" Pattle was the top Gladiator ace with 15 victories with the type.

It comes with a cardboard pair of glasses, with one red lens and one blue one to view the color illustrations that are in 3D.

It is shooting down an Italian SM-79 tri-motor over the ocean.

A 7 3D walk-around illustrations and 2 4-views of a Swordfish variety Gladiator J8A, ser. no. 279, which fought on the Finish side. It has Finish registration marks on bottom of wing areas, Mahatma Gandhi's caricature on the fuselage of a black circle with white squiggly skull on it. It is in battle-green and navy, with silver skis attached and has a large yellow letter G on the rudder.

A Gloster Gladiator Mk. I, fuselage code NJ + BO, an ex-Latvian aircraft. Flown by Erganzungsgruppe (Training Group) 1942-43, as a side view.

The first page of the book shows 75 black and white cover arts of other aircraft books that Kagero publishes.

The back cover of the book has two side-views of a Gloster Gladiator Mk. II, fuselage code Y 459, behind a character of a mosquito. It is an aircraft of the Portuguese Escadrilho de Espedicionara No. 2 dos, Azores.

This book tells the complete story. The text covers not only the type's remarkable operational history, but also that of the Gloster's journey to its production.

Also examined are the Glatiator's design and construction, and its subsequent technical development. Second-line duties and service with foreign air forces are also briefly covered.

Supporting lavish artwork and 3D exploded views vividly bring the aircraft to life, making it an ideal reference work for the modeler.

I want to thank Casemate Publishers. Who sent me this review sample and the folks at Kagero.

Casemate is the N.American distributor of Kagero books and all their titles can be seen on Casemate's site at:
www.casematepublishers.com