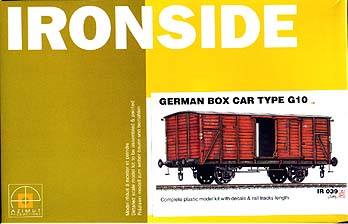 Azimut/Ironside was a model company based in Paris, France. I believe they are long out of business now.

One of the most prolific wagon types before WWII was a design that evolved from a Prussian flat-roofed covered goods wagon (freight / box car in the tongue of  Americans).

G10's were built both with and without brakeman's cabins on the upper end of the roof. Originally, un-braked cabins had neither brake cabins nor brake shoes, but later, some were rebuilt with air brakes and had brake shoes fitted, but still didn't have the cabin.

A lot of early wagons (before the creation of the Deutschen Staatsbahnwagen-Verband) had axle-boxes of an open 'V' form (like the Trix G02). From about the time of the first Verbandsbauart, these axle-box guides were made solid as many Verbandsbauart designs were only modifications of earlier designs.

The box lid is split in half with one side being orange and the other yellow. A white sticker has been glued to it with an illustration of the G-10 sitting on tracks,. It is red with a black undercarriage and steel colored roor. It has numerous white stencil marks on it.

The other side panel gives Azimut Productions street address in Paris, France, their telephone number and fax number. This is followed by “Scale model for the collector over 14 years. Glue and paint not included” in French and English.

The kit contains white styrene trees that are identical and contain the parts for the wheels, axles, brakes etc.

The wheels in the kit are molded as solid vs the spoked wheels shown on the box art. It  appeared early in it’s production with the spoked ones. 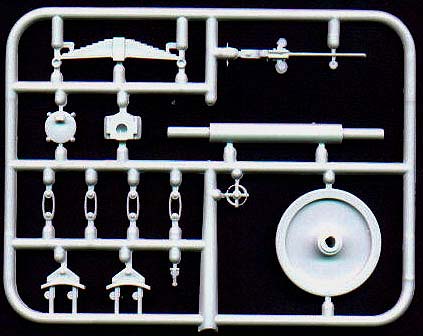 The other five trees of parts in the kit are molded in a medium gray color. No flash is evident anywhere and the parts seem rather beefy and sturdy.
One tree of gray parts holds the rails and ties for the railroad road bed and a concrete telephone pole. Unfortunately there are no instructions in the kit as to how to assemble this telephone pole…groan. 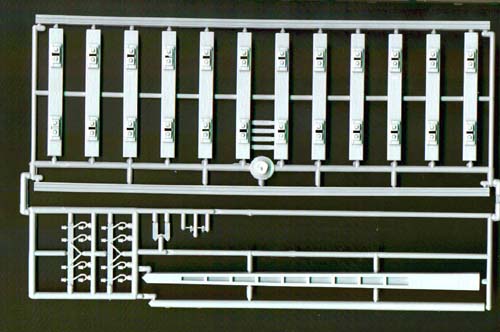 Two other trees are identical for doing the chassis and box car floor. 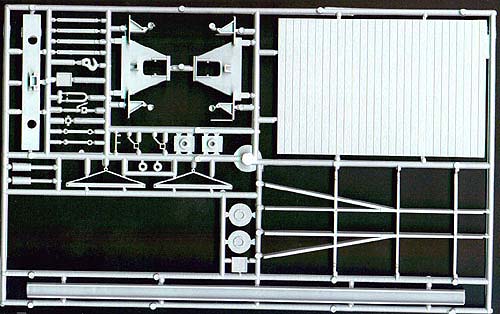 Two more identical trees are for the roof, sides, and doors of the box car. The parts total 108. 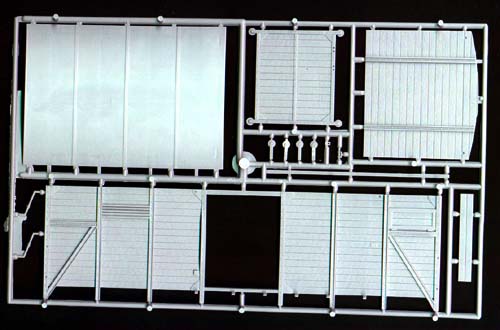 There is also a length of steel rod included to do grab handles.

None of these trees are marked with either a parts tree letter or part numbers. You have to carefully study the instructions and identify the parts by their shapes. This is perhaps the weakest point of the kit. Numbers would have helped.

Instructions consist of a single sheet folded in the center into four pages with five assembly steps as exploded drawings.

There is also a painting and decaling guide drawing. It is the box art subject, already described above.

The first step to do in the kit calls out for shortening the side members and the support beams of the cars bed by 5.5mm. No need to measure this as Azimut/Ironside has scored the parts at that point. Good move Ironside! Instructions are in French and English.

A small decal sheet is provided with all white lettering for all the multitude of stenciling seen on these box cars.

This kit looks like it will make up nicely and will be a welcome addition to the other rail cars I have by DML. I am thinking of displaying it with the doors open and some German soldiers off loading supplies onto maybe a Opel Blitz truck to forward them to the front. I assume that German soldiers also rode in these cars to the front too. I bought some Verlinden brand WWII German propaganda posters set no. 14 to post some of them on the walls of this box car.

I downloaded instructions off a railroad modelers site about how to weather a box car too.

I have done assembly of the undercarriage and have added vertical support beams to the inside of the cabin walls. I managed to drop all this and lost 2 of the wheel brake assemblies. I will have to scratch build new ones.

I think that Azimut has gone out of business. Perhaps this kit can be found somewhere on the internet yet. I did find a site that still has some of Azimut’ other kit releases yet, but the prices are dear because of their rarity. This kit has a copyright of 1999 and I think I paid right around 30 bucks for it back then.