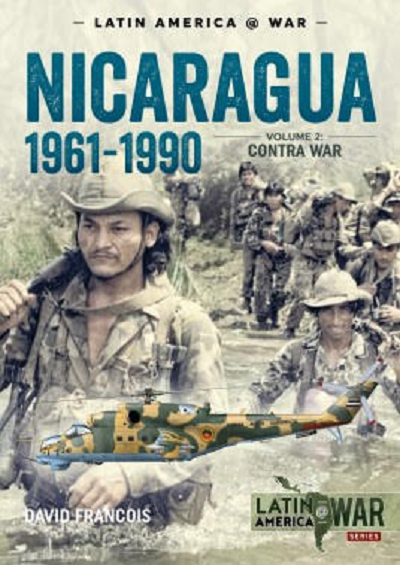 MSRP: $29.95
In 1979, the Sandinista government established itself in Managua, the capital of Nicaragua.

It found the country ruined by the long war against the Somosa dictatorship and natural disasters alike. Nearly half of the population was either homeless or living in exile.

Attempting to restructure and recover the underdeveloped economy, Sandinistas introduced a wide range of reforms and a cultural revolution.

Considering the Sandinistas to be "Cuban-supported Marxists" and therefore a major threat to the U.S. domination of Latin America, in 1980-1981 the U.S.A. began supporting the creation of the Contra-revolutionary forces (better known as "Contras"), and thus helped provoke a new war that was to rage through Nicaragua until 1988.

Leaning upon extensive studies of the armed groups involved, and their combat operations of the 1981-1988 period, "Nicaragua, 1961-1990, vol. 2" provides an in-depth coverage of military history during the second phase of one of the bloodiest, and most-publicised armed conflicts of Latin America in modern times.

Guiding the reader meticulously through the details of the involved forces, their ideologies, organization and equipment, this book offers a uniquely accurate, blow-by-blow account of the Nicaraguan War and is profusely illustrated with more than 120 photos, maps and color artworks.
​THE BOOK:

The cover art is a black and white photo of troops marching down a road. I don't know what side they are for. All are wearing camouflage uniforms and cloth brimmed hats or bare-headed.

Over-top of this photo is a AT-33A helicopter that is repeated in the book.

Usually, Helion repeats their cover arts in their books and have captions for them telling what's going on. Not the case this time.

The back cover has a dim black and white photo of about a dozen troops in a truck that are waving their weapons up in the air. Again, I have no idea who they are troops for.

Over this photo is a color profile of a Sandinista Air Force AT-33A fighter plane.
51 of the black and white photos are of various troops.

There are black and white photos of AFVs that include: a Dodge M37B Jeep, 2 photos of a T-17E-1 Staghound armored car, a M3 half-track, 2 photos of a BTR-60 PB, a T-55, a BTS-2, a BRDM-2 armored reconnaissance vehicle and weapons pictures of a recoilless rifle, PAS-MI-17 rocket launcher and a 6K:32 MC rocket launcher.

There are illustrations of the BCS, the ARDE and the FDN insignias.

A black and white photo of Fidel Castro and Daniel Ortega together.

Black and white aircraft photos include:

There are 5 information lists in the book.

Color profile illustrations include for AFV's:

Color profile illustrations of aircraft include:

There is a one page bibliography at the back of the book, 4 pages of NOTES, acknowledgments and information about the author of the book.

David Francois, from France, earned his PhD in Contemporary History at the University of Burgundy and specialised in studying militant communism, it military history and relationship between politics and violence in contemporary history.

In 2009, he co-authored the Guide des archives de l'Internationale communiste, published by the French National Archives and the Maison des sciences de l'Homme in Dijon.

This book will be of interest to both military historians and modelers alike. Highly recommend.

I want to thank Casemate Publishing, the N. American distributor of Helion & Co. books for this review sample and the folks at Helion .

All Helion book titles can be viewed on Casemates web site at:
www.casematepublishers.com