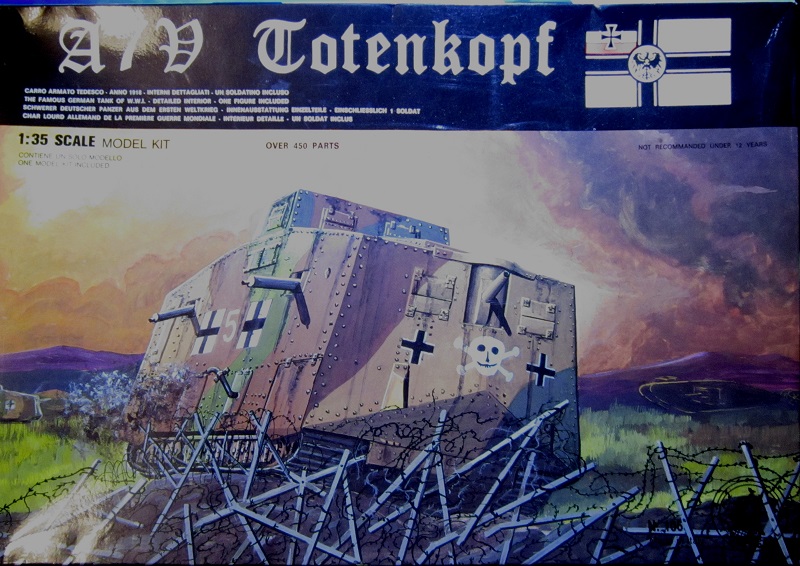 MSRP: $32.85 plus postage directly from Italy

Unfortunately, the very fragmentary history we have of these tanks does not tell us much.

It’s well known that this type tank was only built in no more than 25 to 30 examples. There is not very detailed history of their operative life.

We have proof that four tanks of this series were painted with the macabre badge of the skull and cross-bones and all of them belonged to Abtielung 5. The German tank troops loved to name their tanks with names from German mythology, and two of these tanks were named “Lotte” and “Mephisto”. This is not to be confused with the “Mephisto” shown in the Ausrian War Memorial of Brisbane (Australia), which is the only known surviving model of this tank series left. This example is very different from the tanks of Abteilung 5 and not the original tank that bore the name “Mephisto”.

We should not be surprised at these differences in the A7V tanks. In fact, though the production of the tank was very small, the differences, in some cases were remarkable, even in the armament.

This Tauro kit is the most common model of the A7V.

Tauro is a model company based in Italy. They only ever did 2 or 3 AFV model kit and then stopped. I think they are just barely in business any more.

The kit comes in a shrink-wrapped, large, sturdy tray and lid type box. The box art shows a A7V crashing through a barbed-wire obstacle in no man’s land and with a second A7V in the background. Also, in the background is depicted a British Mark I “Male” tank. The A7V is in a wave pattern of brown, dark green and earth yellow. Each of these colors is outlined with a thin border of black. On the sides there are 2 white squares with black crosses on them. Between these is white number 5. On the bow there is 2 more German crosses that are black with white outlines and more like the WWII type. Between them there is a white skull and crossbones.

Side panels show the box arts of 3 other Tauro kits: the A7V with different box art, lit no. 101, the British Mark I “Male”. Kit no. 102 and a French Char Schneider C.A.1, kit no. 103.. To my knowledge, the Char Schneider was never produced yet by Tauro and I wonder if it ever will be.

Both ends of the box list some details in the kit:  One figure included, detailed interior and a moveable suspension.. This is in English and Italian. Below this is Tauro’s street address in Italy.

Tauro was probably the first model company to tackle WWI tank subjects in 1/35th scale. Years later, Emhar did a few. It is an era that is still wide-open for more subjects and especially for more WWI figures.

Inside the box are 3 large trees of tan parts in a large cello bag. Inside this bag, and also in individual cello bags, is a bag of springs and pins for the suspension and tracks and another bag of black vinyl individual track links. The metal pins are to be used to hold these track links together. However, a friend of mine warned me that the pins do not fit the holes in the links. The holes are too small and pins are flimsy and easily bent. You have to get out the pin vice and drill the holes larger or find some steel wire that is stronger and the size of the existing holes.

The instructions are a large single sheet that accordion folds out into eight pages in 8 ¼” x 11 ½” page format.

Page 1 begins with an actual black and white WWI photo of an A7V that has at least 12 German soldiers riding on top of it. It does not appear to have any markings on it at all.

This is followed by the history of the A7V in Italian and English. The rest of the instructions is also in these two languages.

Page 2 has the parts tree drawings with a name listing of all the components shown, in Italian and English. The trees are not alphabetized and although there are numbers next to the parts in the drawings there are none next to the parts on the actual trees. This will make for very careful study of the plans to get the right parts for assembly. Bad move Tauro.

Pages 3 through 7 give us 17 assembly steps. These are called out alphabetically (A to P), rather than the usual numerical sequences seen in most kits. Different!

Page 8 has the assembly drawing of the single crew figure in the kit. He is posed with his left arm raised and holding the door of the A7V open. He is also shown wearing the unique chain-mail mask that crew members wore during WWI, at times, in this tank. This was to protect their faces from shrapnel supposedly.

This is followed by two paint schemes for the Abtielung 5. Both are in wave camouflage of the same pattern. One has the numeral 5 on the side and the other has a Roman numeral “V” in red. Otherwise the two are pretty much the same scheme.

The first large parts tree holds the front, sides, roof and rear panels of the A7V along with some internal panels, the air intake grills and the single crew figure. He is divided into a body with separate arms. (16 parts) 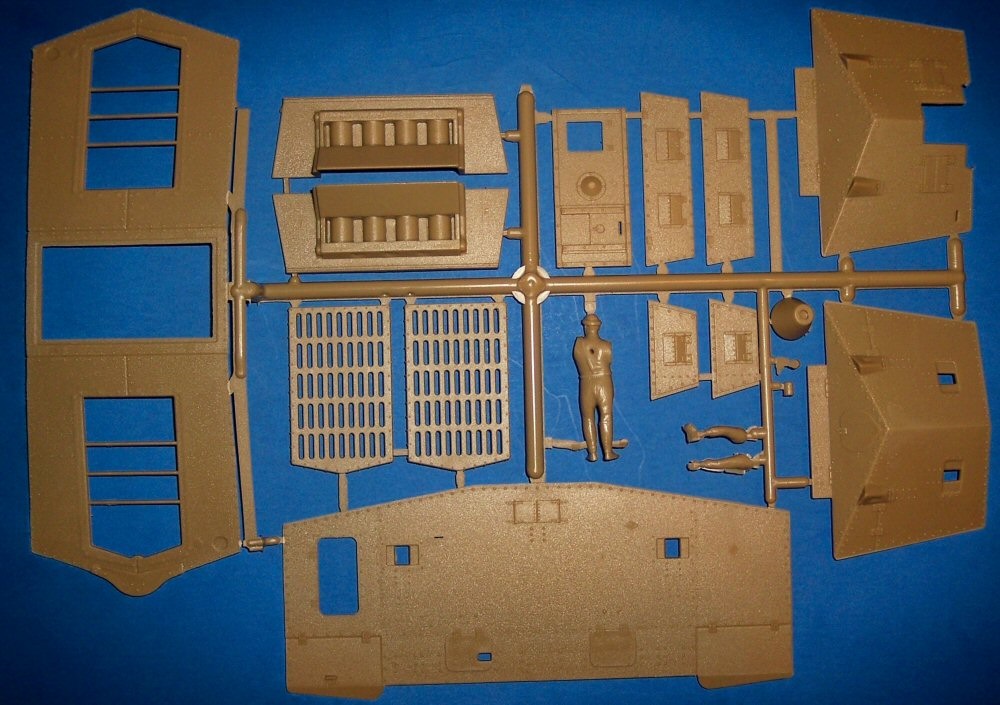 The second large tree holds the floor and deck of the interior of the vehicle along with the machine-guns and main gun, more bulkheads, a ladder etc. (69 parts) 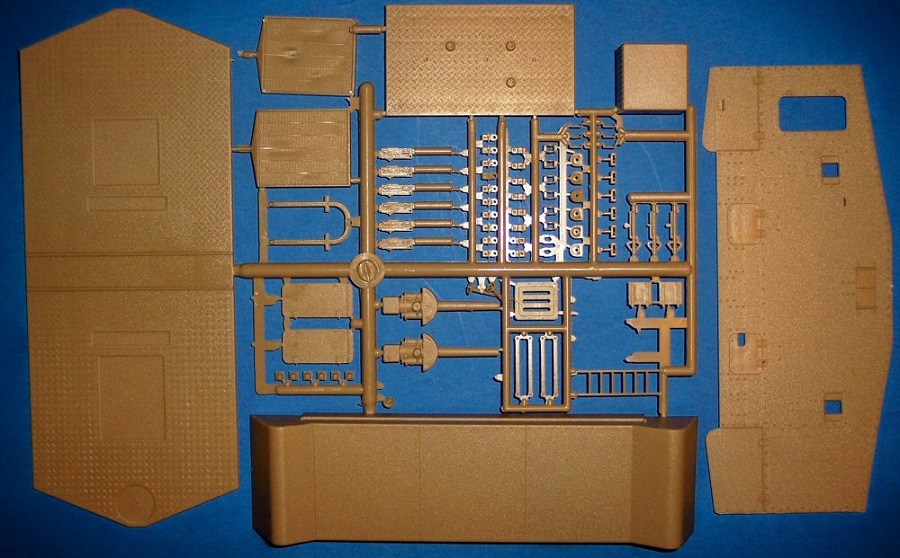 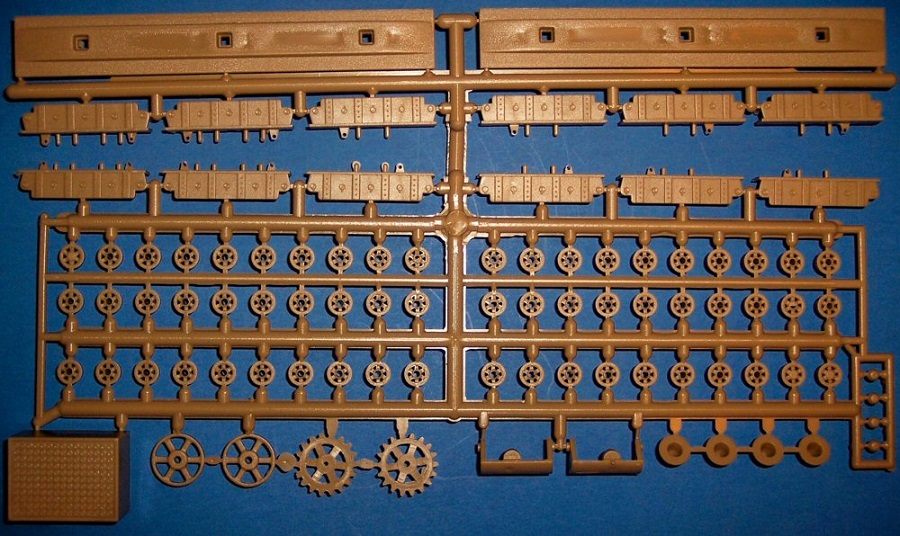 Final parts are molded in black and are the individual track links. There are 10 links per tree. 110 links are needed to do the two track runs (55 each side with a corresponding amount of the metal pins). There are a few extra links in the kit to take care of any mistakes, but very few extra and only a few extra pins too. 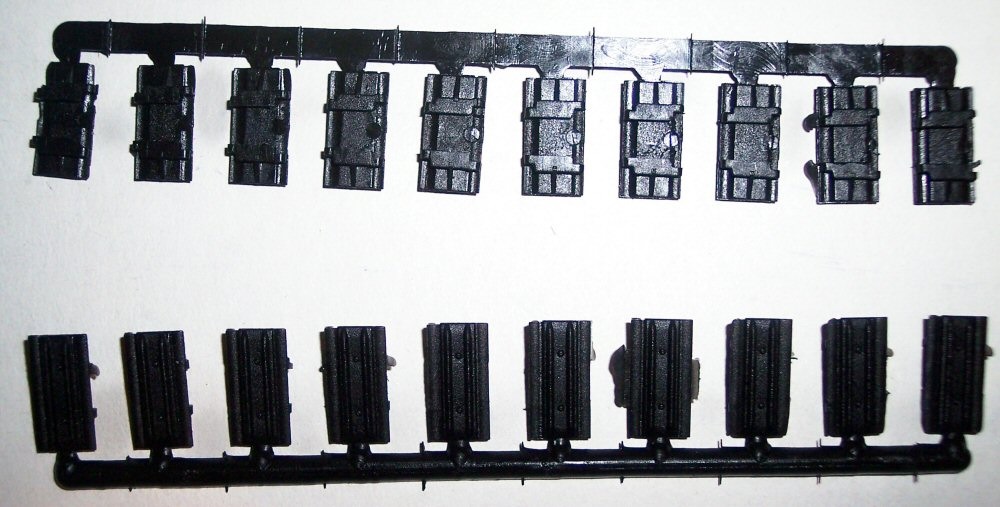 The decal sheet holds the two markings mentioned above. 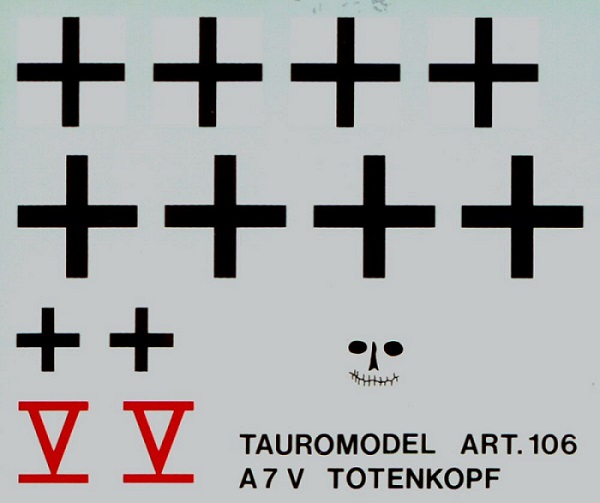 I feel that WWI has been pretty much neglected as far as armor and figure kits and this is really a nice kit. I wish that Tauro would eventually produce that Char Sneider shown on the side panel of this box.

Detail, by and large, is very good on this kit. The original molds are at least 20+ years old.

Highly recommended to modelers interested in the First World War.

I bought my kit directly from Tauro in Italy back in 2007.

I have started assembly of my kit and intend to pose it in a diorama of no man’s land with barbed wire and trenches perhaps. I have a few WWI German infantry figures I could add tool. 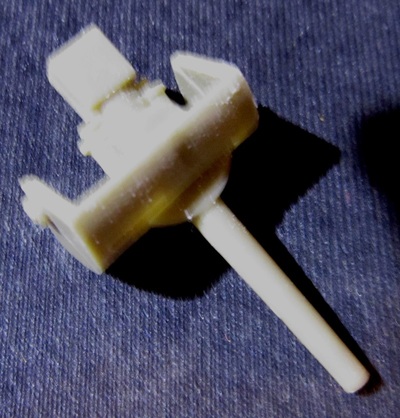 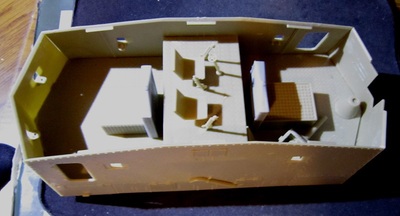