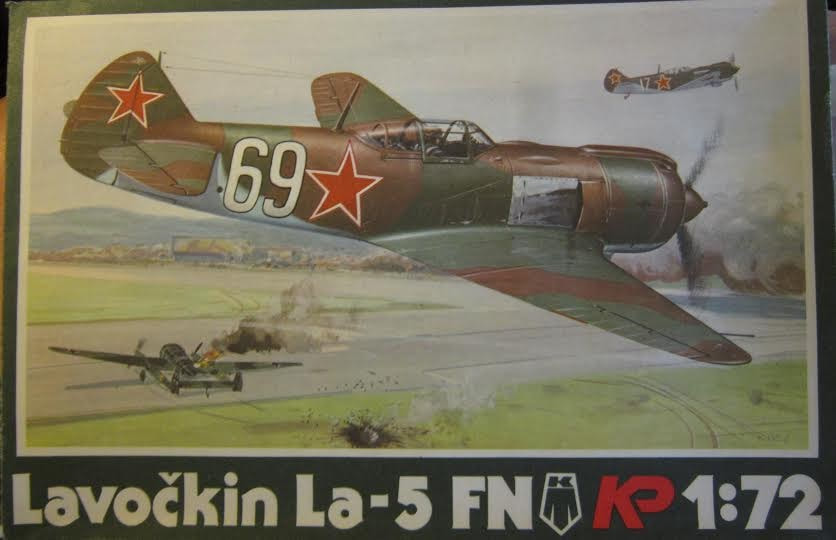 Kit no. 24
By Ray Mehlberger

The Lavochkin La-5 was a Soviet fighter aircraft of World War II. It was a development and refinement of the LaGG-3, replacing the earlier model's inline engine with the much more powerful Shvetsov ASh-82 radial engine. It was one of the Soviet Air Force's most capable types of warplane, able to fight German designs on an equal footing.The La-5's heritage began even before the outbreak of war, with the LaGG-1, a promising yet underpowered aircraft. The LaGG-3 was a modification of that design that attempted to correct this by both lightening the airframe and fitting a more powerful engine. Nevertheless, this was not enough, and the lack of power remained a significant problem.

In early 1942, two of the LaGG-1 and -3's designers, Semyon Lavochkin and Vladimir Gorbunov, attempted to correct this deficiency by experimentally fitting a LaGG-3 with the more powerful Shvetsov ASh-82 radial engine. Since the LaGG-3 was powered by an inline engine, they accomplished this by grafting on the nose section of a Sukhoi Su-2 (which used this engine). By now, the shortcomings of the LaGG-3 had caused Lavochkin to fall out of Joseph Stalin's favour, and factories previously assigned to LaGG-3 construction had been turned over to building the rival Yakovlev Yak-1 and Yak-7.

The design work, which required that the LaGG-3 be adapted to its new engine and still maintain the aircraft's balance, was undertaken by Lavochkin in a small hut beside an airfield over the winter of 1941–1942, all completely unofficially.

When the prototype took flight in March, the result was surprisingly pleasing – the fighter finally had a powerplant that allowed it to perform as well in the air as it had been supposed to on paper. After flying, the LaG-5 (the change in name reflecting that one of the original LaGG designers was no longer with the programme), Air Force test pilots declared it superior to the Yak-7, and intensive flight tests began in April.

By July, Stalin ordered maximum-rate production of the aircraft and the conversion of any incomplete LaGG-3 airframes to the new configuration, now simply known as the La-5. The prototype was put in mass production almost immediately in factories located in Moscow and in the Yaroslav region. Design changes for main production La-5 models included fixed slats to improve all-round performance. While still inferior to the best German fighters at higher altitudes, the La-5 proved to be every bit their match closer to the ground. With most of the air combat over the Eastern Front taking place at altitudes of under 5,000 m (16,404 ft), the La-5 was very much in its element.

Further refinement of the aircraft involved cutting down the rear fuselage to give the pilot better visibility, making this version the La-5F. Later, a fuel-injected engine, a different engine air intake and further lightening of the aircraft led to the designation La-5FN that would become the definitive version of the aircraft.

A full circle turn took 18–19 seconds. Altogether, 9,920 La-5s of all variants were built, including a number of dedicated trainer versions, designated La-5UTI. Very late La-5FN production models had two 20mm Berezin B-20 cannon installed in the cowling in place of the heavier two 20mm ShVAK (both were capable of a salvo weight of 3.4 kg/s). Further improvements of the aircraft would lead to the Lavochkin La-7.

A number of La-5s continued in the service of Eastern Bloc nations after the end of the war, including Czechoslovakia.

KP was a model company based in the Czech Republic. I don't know if it exists anymore??

This kit came in a end-opening type box that was not shrink-wrapped and it was held shut with tape.

I am no fan of end-opening boxes, because invariably parts or the decal sheet find their way past one of the end flaps to become lost forever. Give me a tray and lid type box any day of the week.

This box is flimsy and badly crushed by the weight of other kits in my stash that were atop it.

The La-5FN in the foreground is in a wave pattern of dark-green and brown over a light-blue undercarraige. It has Soviet Air Force red stars outlined in white below the wings, on the fuselage sides and the sides of the  rudder. The fuselage number is white 69 outlined in black.

Both aircraft are in the same scheme colors the one in the distance has the white fuselage number 17 outlined in black on it. They both have bare-metal panels behind the engine exhuast outlets.

The bottom of the box has two 4-views of schemes:

2. A Czech Air Force La-5FN  in olive-drab over light blue undercarraige. Czech roundels above and below the wings and on the rudder sides. It has the white fuselage number C-13 on its sides.

No units are mentioned for either scheme. 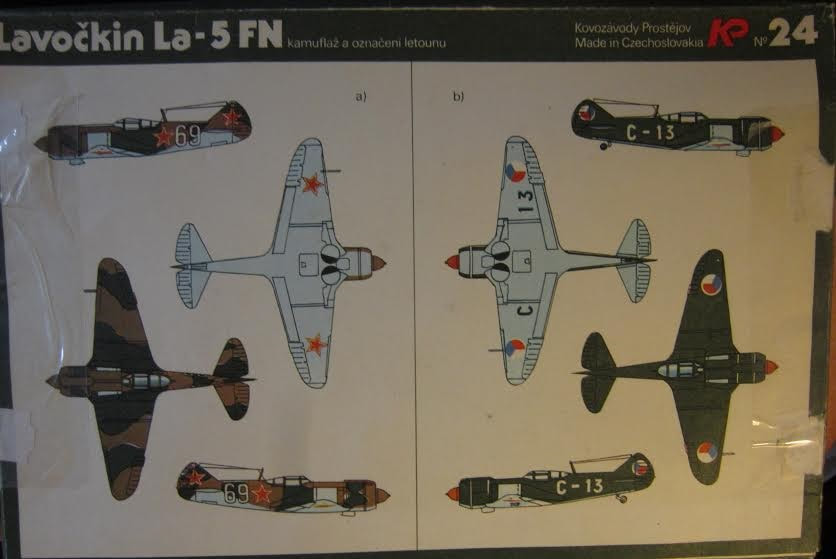 The kit contains one chalk-white tree, a clear tree in 2 sealed cello bags, the decal sheet and instructions.

Trees are not alphabetized and there are no part number tabs next to the parts on them.

The instructions consist of a single sheet in 17" x 12" format printed on both sides and folded twice to fit the box.

The face side begins with a black and white photo of 3 real La-5FN's parked in a hangar. over the history of the aircraft in Czech, German and English and a head-on line drawing of the aircraft  and instructions on how to BUILD the Czech roundels from 3 pieces.

The reverse side has a READ BEFORE YOU START instruction in the 3 languages, over a list of 25 other aircraft kits that KP manufactured and the parts trees illustratons. There are 7 exploded drawings to use for assembly of the kit.

The lone chalk-white tree holds all the parts of the aircraft (45 parts). 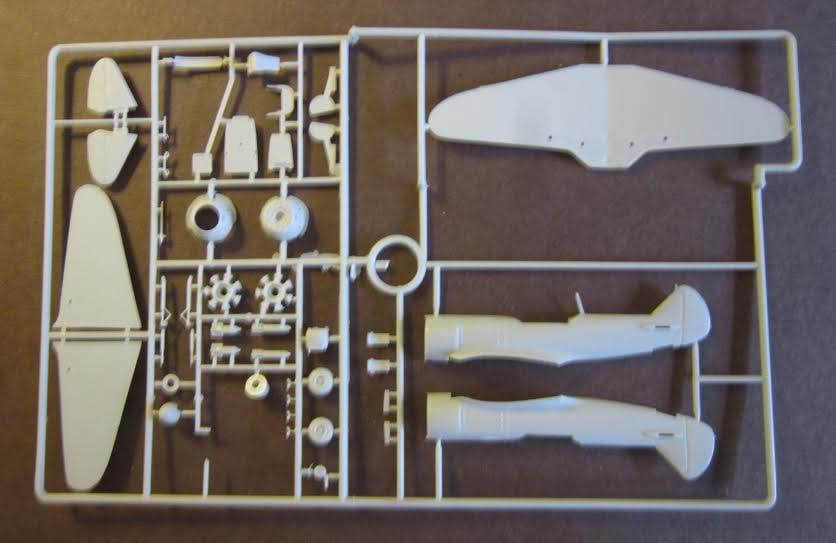 The propeller was broken but can be repaired. 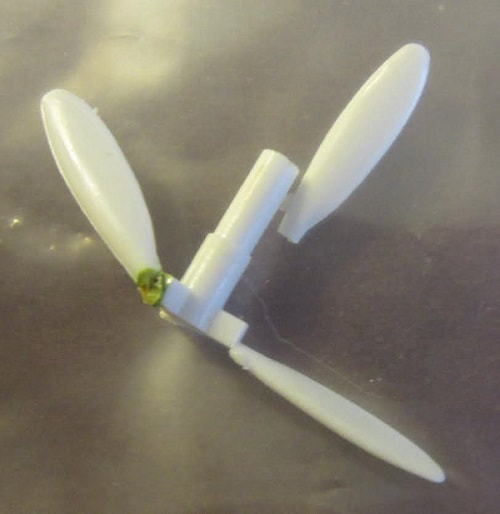 ​The clear tree holds a closed canopy and an open canopy. Also included is a stand. (6 parts). 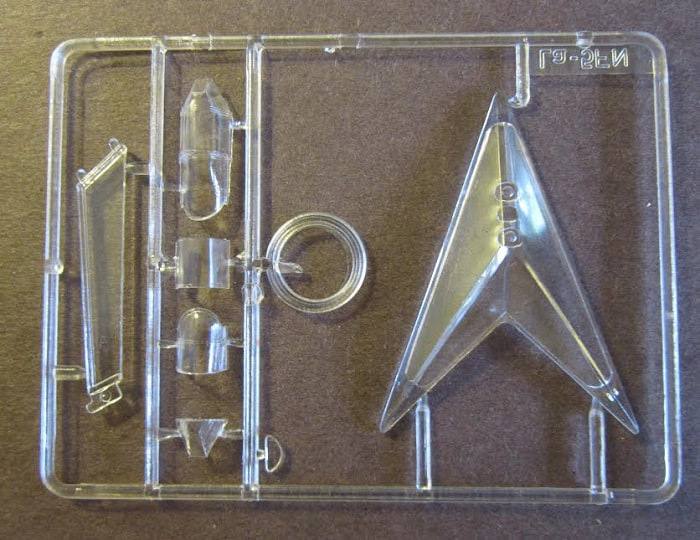 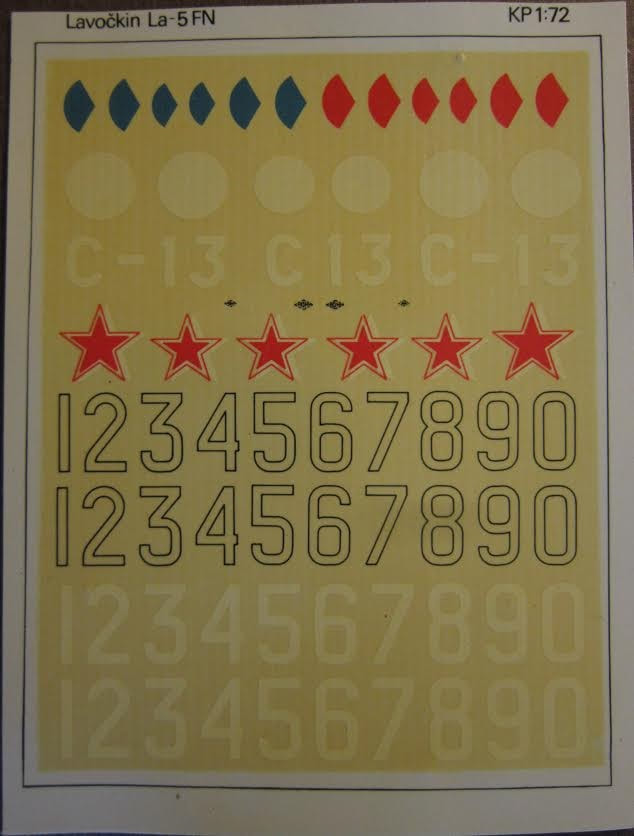 The decal sheet has multiple numbers to choose a fuselage number from and the black outlines for the numbers are seperate. The Czech roundels have to be assembled from 3 parts too.

The kit has raised detail. The wing, elevator and rudder flap are molded solid. All will take surgery to re-position.
​Otherwise recommended.

I got this kit years ago in trade with a modeler in Krakow, Poland.