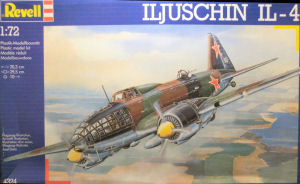 In Box Review of Revell of Germany 1/72nd Scale

Revell is a prolific and elderly model company that has been around for a number of years. They make all manner of model subjects in all the popular scales. They have facilities in both the U.S. and Germany. This kit was produced in Germany.

The Ilyushin IL-4 was a Soviet bomber and multirole aircraft. In 1937, the best all-around bomber of the VVS (Soviet air forces) was the Ilyushin DB-3, an aircraft broadly comparable to an early He-111 or Hampden. In the summer of 1938, one of the many improved versions appeared with M-87A engines (a Tumanskii development of the French 14-cylinder Gnome-Rhone 14K Mistral Major) rated at 950 hp at up to 5000 m (16,400 ft). It drove VISh-23 variable-pitch propellers. The Bluff, turreted nose had been replaced by a longer nose of improved aerodynamic form, with a roof hatch and multiple windows covering each side. At the tip of the nose was a simple Plexiglas cupola with a hand-held 7.62 mm (0.30 in) ShKAS machine-gun. The new nose reduced drag and weight and gave the navigator/bomb-aimer more room. Designated DB-3F (F for forsirovannii, BOOSTED), this more efficient bomber was selected for state acceptance trials, which were successfully completed in June 1939.

The Ilyushin bureau switched immediately to manufacture of the DB-3F, supplies of the M-87A engine being forthcoming, and production of earlier DB-3 models ceased. Deliveries of the improved aircraft began in March or April 1940, and shortly afterwards the Soviet designation system by aircraft function (DB – dalnii-bombardirovshchik, LONG RANGE BOMBER) was abandoned and replaced by a system based on the leader of the responsible design bureau, and the DB-3F thus became the IL-4. It was destined to be the pre-eminent Soviet long-range bomber of WWII.

Though too late to see action in the Winter War against Finland, the IL-4 was serving in substantial numbers when Germany attacked the Soviet Union on May 22, 1941. There were probably almost 1,000, backed up by survivors of the 1,528 earlier DB-3 models. Deliveries seem to have been split roughly in the ratio of 2 to 1 between the ADD (long-range air force) and the MA (naval aviation), there being numerous detail differences between the aircraft used by the two services.

This Revell of Germany kit is probably in its 3rd or 4th reincarnation. The molds are originally by Alfa, a small Russian short run kit producer. The kit was released by them in the 90’s. The molds were also sold under the VEB plasticart label. VEB released several Soviet aircraft, both military and civilian) and some western types, mostly in 1/100th scale. A few were in other scales too (like this one in 1/72nd scale). A lot of their kits were crude molds. Some had display stands, two small tubes of glue and some silver paint. Often the trees were different colors of plastic. The IL-4 is considered one of their best effort. Revell also reboxed their Beriev Be-6 Madge flying boat, which was flawed and had accuracy problems. They also made an excellent Junkers G23/24 in 1/72nd scale. I have this one in my stash.

The kit also appeared under the Zvezda banner (from Russia).

The kit comes in a tray and lid type box. The boxart shows an IL-2 flying over countryside. It is in a wave pattern of anthracite and olive-green and black above and light blue-gray below. Soviet red stars, outlined in white, are carried on the fuselage sides and on each side of the tail. A small white 30 is on the sides of the rudder. The propeller spinners are yellow. The instructions designate this as a long range bomber version 1943 in day colors. It is carrying a external fuel tank under it’s belly.

A side panel has a list of the features of the kit, in 4 languages including English. Next to this is 4 color walk-around photos of the model made up and mounting the large bomb included in the kit under its belly. The other side panel gives a one paragraph history of the Il-4 in the same 4 languages.

Inside the box are three parts trees molded in chalk white. Actually, one of these trees looks like it was removed from the bigger white tree to fit Revell’s box. There is also one black parts tree and one clear one. The decal sheet and instructions complete the kit’s contents.

The instructions consist of a 4 page unstapled booklet. The pages are very close to letter head size.

Page 1 begins with general instructions in 7 languages, including English. This is followed by international assembly symbol explanations and a paint chart. Some colors are indicated to be mixed.

Pages 2 through 5 give a total of 26 assembly steps. Colors are called out as needed in each step and in some steps there is a small illustration of the decal sheet shown, meaning that a decal is needed in that step. This illustration appears in steps number 1, 3, 6 & 7 for applying instrument panel and side console decals.

The fuselage goes together from 4 parts, top, bottom and sides. The inside of the fuselage has nice ribbing molded in the walls. The ailerons on the wings are separate parts. But the rudder and horizontal tail elevators are molded solid.

In step 6, you opt to have the dorsal crew access nose above the nose open or shut.

In step number 18, you opt for the main gear up or down. If you want it down you have to cut the wheel well doors apart.

In step 20, you opt for the crew access door below the nose to be positioned open or shut.

In step 21 you opt to have the rear ventral gun position open or shut. If you want it open and the machine gun deployed you must cut part number 11 (a clear part) in two.

Step 23 is the assembly instructions for 1000 kg sea mine MAB-1 with a wooden stabilizer.

Step 24 is the assembly of the small fuel tank that is positioned behind the torpedo, if you chose this armament to install. This is actually a part of the tropedo system Type 45-36AH.

Step 25 is the assembly of the large fuel tank.

Step 26 shows the above items fully assembled and you now opt to which you want to mount on your model.

Page 6 has a 4-view of the box art subject. Already described above. It is profiles of both sides, the top and the bottom.

Page 7 has a 4-view of another long range bomber version 1944. In night colors. It is in a wave pattern of anthracite, olive green and black above light blue gray below. It’s wing tips are white, above and below the wings. The propeller spinners are green. Soviet red stars outlined in white are applied to the fuselage sides, tthe sides of the tail and under the wings. A white number 35 is low on the sides of the rudder.

Page 8 has another 4-view of a Navy torpedo bomber version 1942. It is in a wave pattern of only the anthracite and olive green above the light blue gray below. The propeller spinners are green. It carries Soviet red stars without the white borders on the fuselage sides, the tail sides and under the wings. There is a yellow number 5 on the rudder. 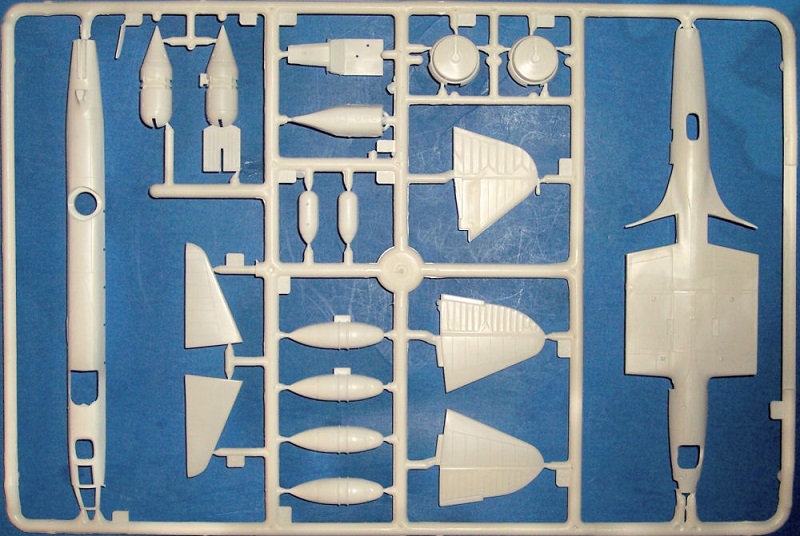 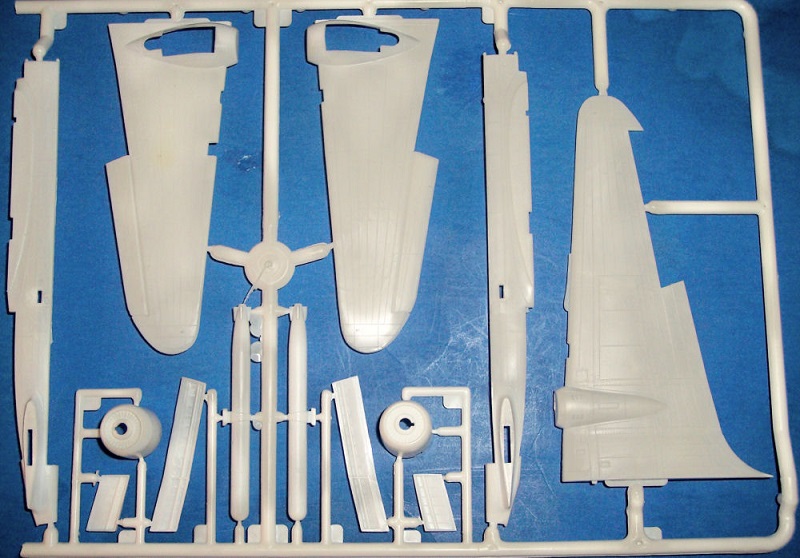 The third smaller white parts tree (that obviously was cut off the end of the second larger white tree) just holds the other wing top half.

Some parts had broken off this tree and were lost and not in the kit. I sent a letter to Revell of Germany and not only did they send me the few parts that were missing but also a WHOLE tree of the black parts. So I got more than enough replacements. Great customer service at Revell !! 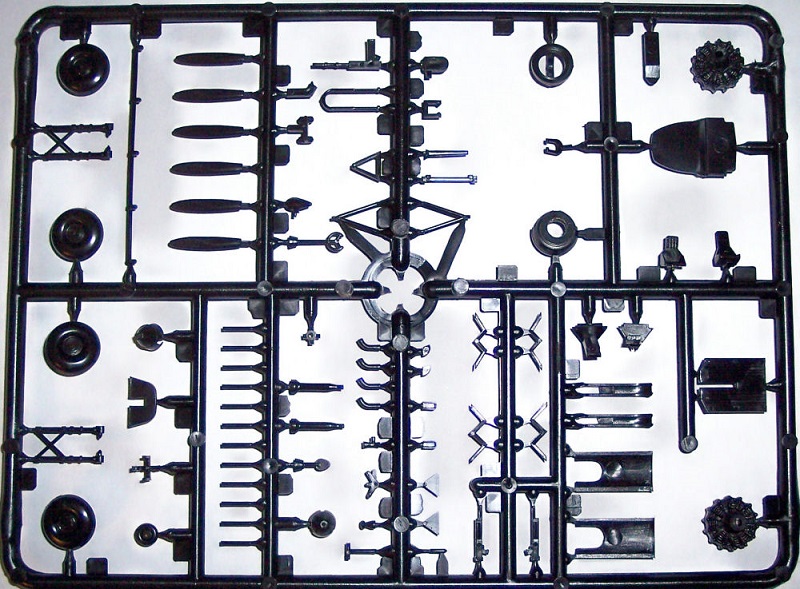 The clear parts tree holds the cockpit and cabin windows, the dorsal turret bubble, ventral gun gondola and wing light lenses (18 parts) Because this aircraft has a quite extensive greenhouse of a nose, there are a lot of frames to be carefully painted, which may not please some modelers.

I was missing one part of the clear ones. Revell again sent me a whole tree to replace that one part! Can’t beat service like that.

Detail, for the most part, is of the raised variety.

The decal Sheet completes the kit's contents. It holds Soviet red stars with and without the white borders,the white wing tips, the yellow 5, the white 65 and 30, instrument and side panel dials. There are also 2 small white dots and 2 white strips that are never called out on the markings instructions. 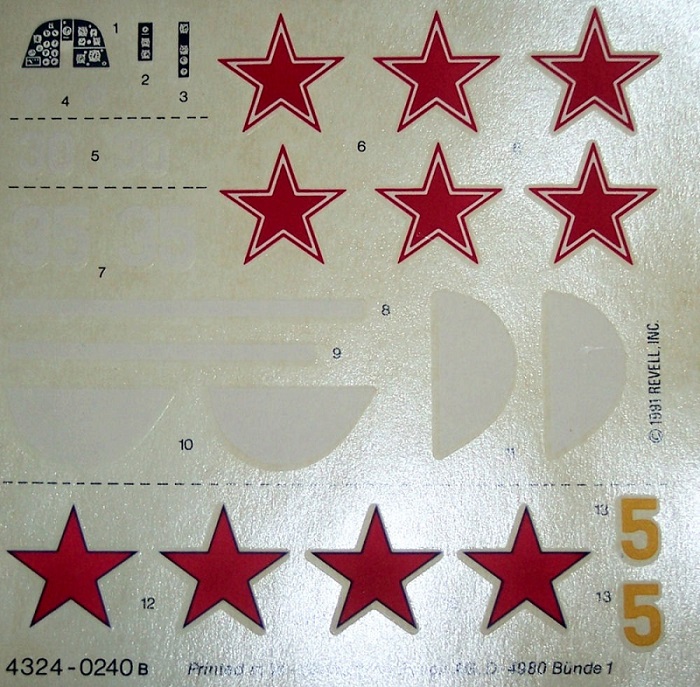 The kit has a copyright date of 1991. Highly recommended to modelers of WWII Soviet aircraft. I purchased my kit at my local hobby shop. I recommend the kit to modelers that have done a few other aircraft kits of this ones complexity.