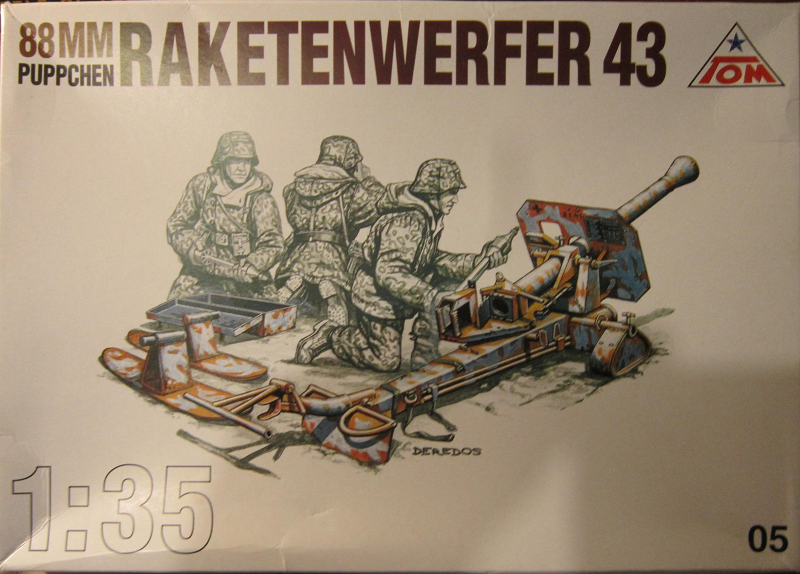 Kit no. 5
By Ray Mehlberger

Available one place in Belgium.

In 1944, the Anhaltisch/Westfalische Spregstogg AG of Reindorf (also known as WASAG), submitted a design for the Armies requirement for a light anti-tank gun. This particular design by Dr. Erich Von Holt was original in its approach.

The idea was to use a "Raketen Panzerbuchse 54", better known as an "Ofenrohr" or "Stove Pipe", similar to the American 2.36 inch Bazooka. The tube unlike the "Stove Pipe" had a simple sliding breach block, which when closed, sealed the rear of the weapon, and gave the specially prepared 88 mm hollow charged rocket a greater velocity and range then the standard Panzerbuchse 54 which had a velocity of 110 meters/per second and a maximum range of about 150 meters.

The Raketenwerfer 43 "Puppchen" had a considerably better performance with an improved muzzle velocity of 180 meters/per second and an effective range of 700 meters.

The ring stabilized 88 mm rocket projectile was competent to perform admirably along side its conventional cousin in penetrating armor plate up to 160 mm thick with the advantage of a single round only weighing 2.60 kg.

About 1,000 "Puppchens" were believed to have been manufactured. The accuracy and the high performance of the weapon was quickly learned by the OKH Oberkommando des Heers, (Army High Command) on the July 1, 1944, stating that "The special badge awarded for single-handed destruction of an enemy was not applicable when a "Puppchen was used in its destruction".

The advantage of the "Puppchen" with the breech loading arrangement presented several disadvantages over conventional light anti-tank weapons. A relatively high recoil required the weapon to be mounted on a standard box section carriage which increased its weight considerably.

However, as a mobile weapon it proved itself to be relatively easy to maneuver and bring into action quickly. The "Puppchen" could be fired with or without the wheels being mounted.

Tom is a model company based in Belgium.

The box art shows a Puppchen with a 3 man crew, posed against an all-white background. Similar to how Tamiya does the majority of their box arts too.

The figures are all wearing camouflaged winter parkas and pants and cloth covers over their steel helmets. Parkas are reversible to white.

The Puppchen is panzer gray with a heavy coating of white winter white-wash.

The figures shown are not included in the kit.
​WHAT'S IN THE BOX:

The kit contains 2 identical pale gray trees and the instructions. Trees are not cello bagged.

Each tree holds the Puppchen parts, the ground skis, a rocket round, the shield, ammo case etc. (38 parts) 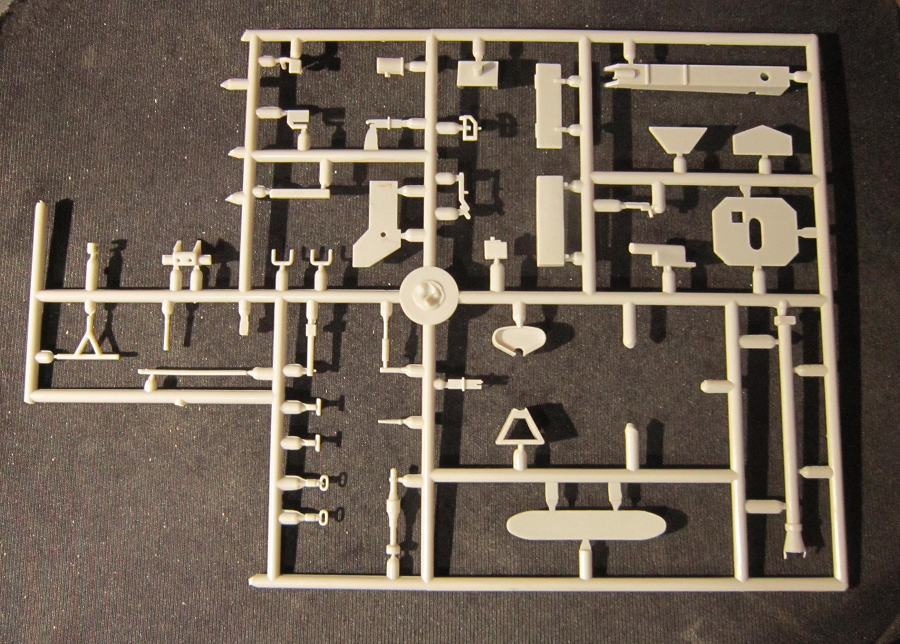 ​In the parts trees illustrations one tree is shown missing 16 parts. I assume this Tom's way of indicating that they are excess and not needed to complete the kit.

The instructions complete the kits contents. As mentioned earlier there are no crew figures or decals included in the kit.

The instructions consist of a single-sheet printed on both sides in 8 1/2" x 11" page format.

The face side of the instructions starts with a line drawing profile of the Puppchen on its ski carriage. Below it is the history of the Puppchen in Belgian  and English. The bottom of the page lists other kits by Tom: