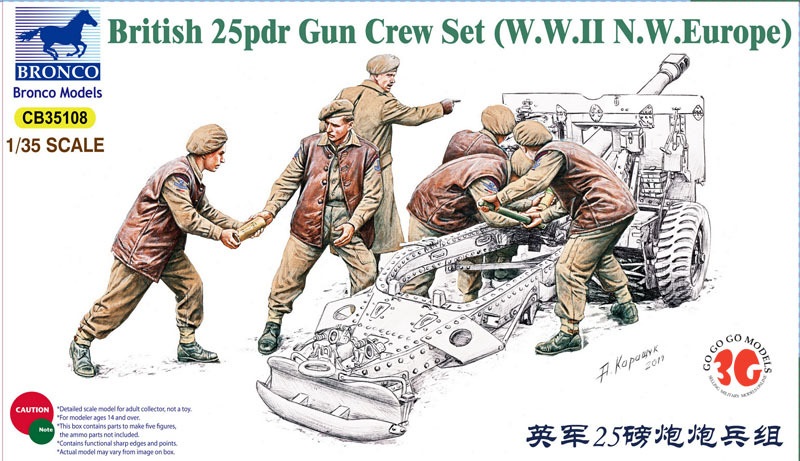 The Ordnance QF 25-pounder, or more simply, 25-pounder or 25-pdr, was introduced into service just before WWII, during which it served as the major dual-purpose British field gun/howitzer. Combining high rates of fire with a reasonably lethal shell in a highly mobile piece, it was the British's primary artillery field piece well into the 1960's, with smaller numbers serving in training units until the 1980's. Many Commonwealth of Nations countries used theirs in active or reserve service until about the 1970's and ammunition for the weapon is currently being produced by Pakistan Ordinance Factories
Bronco is a model company based in Hong Kong China.

The kit comes in an end-opening type box. I am no fan of this type of box, as parts always find their way past the end flaps to become lost. Give me a tray and lid type box any day of the week.

This box is too long, as there is a 3” void in one end of it. The parts surely could have been packaged in a smaller box.

The box art shows a crew of 6. Five figures are of infantry men and one is of an officer. The infantry men are dressed in Khaki uniforms with leather vests and berets on their heads. Their pants are bloused at the bottoms over low shoes. The officer is wearing an officer’s peaked hat and a long overcoat. He is otherwise dressed the same as the infantry men. He holds a pair of binoculars. One infantry man is the gun aimer, Another one is loading a shell into the breech of a 25 pdr. Three are handling the ammo. Although the box art shows the ammo, there is NONE included in the kit. This is sad given the slightly high price of the kit.

One side panel of the kit shows the decal sheet in color and a British flag.  Bronco’s street, e-mail and web addresses are shown.

The other side panel has 2 full color box arts of other kits that bronco markets.

The back of the box serves as the painting and assembly instructions in full color with the parts trees illustrations above this as line drawings.-At the bottom is a paint listing of colors suggested to use to finish the figures. It lists Gunze Sangyo, Hobby Color, Humbrol and Tamiya brands of hobby paints. A red rectangle with white lettering says “Caution: The ammo set is not included. Please purchase this Bronco product AB3512 if required”. It is my personal feeling that this should have been included in this kit. Especially at the MSRP charged.

The kit contains 6 light tan trees of parts in two cello bags and the decal sheet in a cello of it’s own too.

Tree letter A holds the parts of an infantry man that is bent forward at the waist and handling an ammo round. He is divided into seperat head, torso front and back parts, arms and legs. This tree is co-joined to letter C tree. 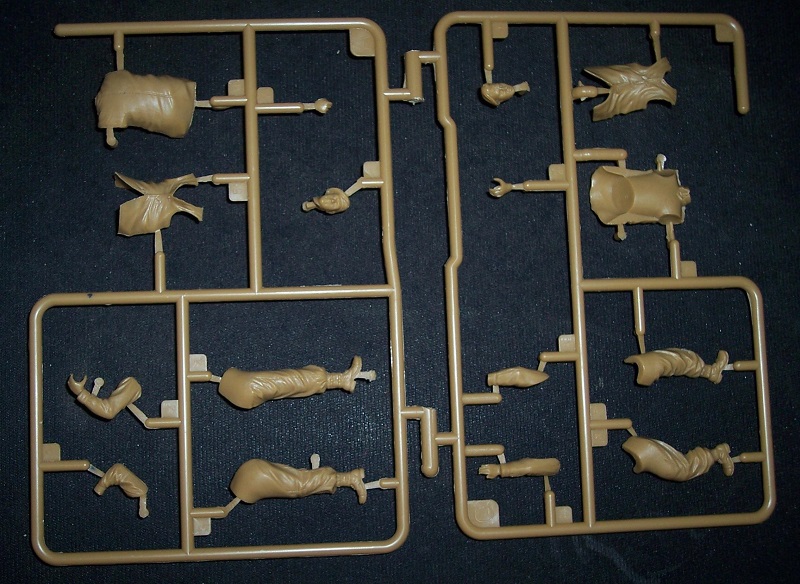 Letter B tree holds holds another infantry man that is handling ammo. He is divided the same.

Letter C tree, as mentioned is co-joined to letter A tree. It holds the infantryman that is the gun aimer.

Letter D tree holds the officer. He is divided into separate head, torso, arms. Front and rear of his long coat from the waist down and his legs. He holds a pair of binoculars in his left hand. This tree is co-joined to letter E tree. 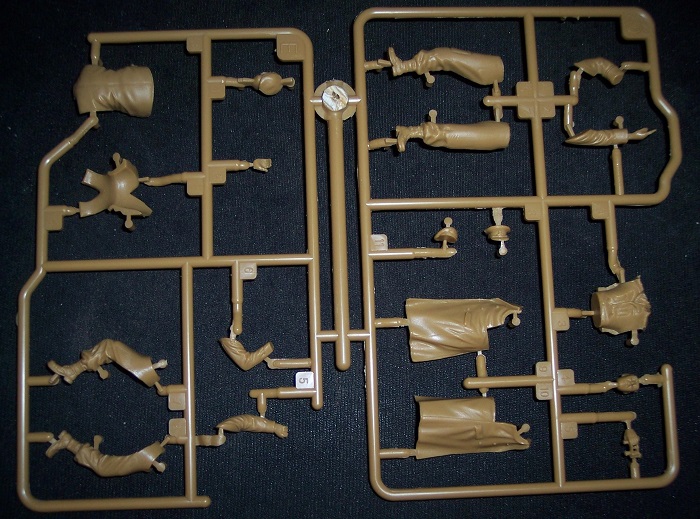 Letter E tree holds an infantry man who is bent forward at the waist also and handling an ammo round. He is divided the same as the other infantry men. This tree is co-joined to letter D tree.

Letter F tree holds infantry man who is ramming a round into the breech of a 25 pdr. with a pole. He also is divided the same as the other infantry men.

To make a complete diorama a person has to obviously buy 3 Bronco kits: these figures, the ammo and a 25pdr. It might have been nice if Bronco had put them all into one kit.

The decal sheet provided is kind of a first for me. I don’t ever remember seeing uniform insignia included in a figure kit. Nice move Bronco. However, we are not told what the two units are that are provided. I looked them up on Wikipedia and found that the one with the letter X on it is for the 52nd  Lowland Div. and the one with the polar bear is for the 49th West Riding Infantry Div. 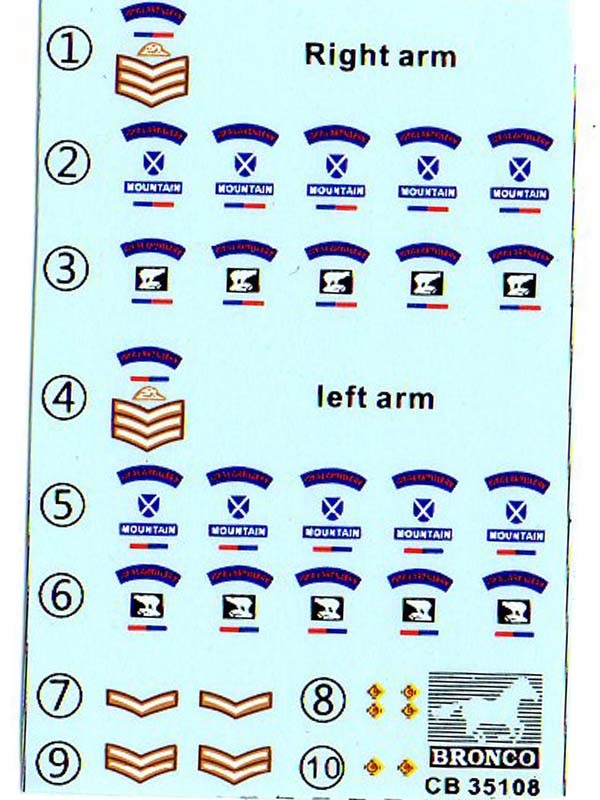 The detail on these figures is very good and I recommend them to all modelers.

I want to thank DML USA for this review sample.