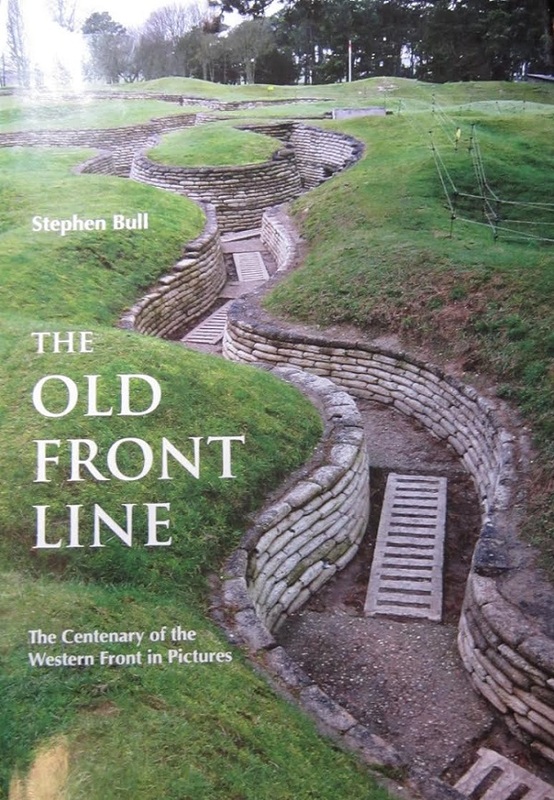 Review of The Old Front Line
The Centenary of the Western Front in Pictures
Author: Stephen Bull

MSRP: $29.95
Now that the last veterans are gone, the First World War is now a completely historical subject governed by archaeology and genealogy, battlefield tourism and military history. The anguish and privations are a bit further away, but there is still huge interest in the awful conditions and carnage endured by a generation of youth who sacrificed their lives for their countries.

"The Old Front Line" is a phrase first coined by the poet John Masefield when he looked back on the battle of the Somme from a distance of just one year, in 1917, and speculated how the Western Front might look in the future. Steven Bull's copiously illustrated work - part travel guide, part popular history - a century on, answers his speculations. The main source material is new and contemporary photographs, as well as some from the intervening century. Taken together these provide a series of exciting vistas and informative details that tell the story of the battles and landscapes. Aerial photography, old and new ground shots - and in a few cases even images taken underground - provide an authoritative summary of the war on the Western Front.

Following an introduction that sets the scene and looks at the early stages of the war, eight chapters examine the Western Front geographically, looking closely at the main areas of fighting and what is visible today: not just the "Iron Harvest" - the scars left by trench and battle - but also the cemeteries, war memorials and statues that remind the visitors starkly of the loss of a generation.

This book is hard-bound of 192 pages in 8 1/2" x 12 1/2" page format.  The cover shows a color photo of preserved trenches at Vimy. The back cover shows a memorial building.

Casemate Publishing is located in Pennsylvania.

There are 184 color photos in the book and another bunch in black and white. They include: 14 photos of British cemeteries, 5 of German cemeteries, 66 black and white WWI photos, 67 photos of statues and memorials, 1 shot of tourists and a archaeologist at sites, a WWI helmet display, a French WWI uniform display, 13 shots of restored bunkers, 33 other museum displays, 19 shots of restored trenches, 12 maps, a Parisian Renault taxi in a museum, 9 photos of French cities today, 13 shots of battlefields, 2 shots of the Chinese Laborer's cemetery, a German advertisement for a trench periscope, shots of the insides of 2 restored French buildings, a German WWI propaganda card, 1 shot of a combined French and German cemetery, an unknown soldier cemetery, a German grave marker, French road signs directing to war cemeteries, 2 photos of French forts, 3 shots of the American cemetery and a French WWI post card.

This book really takes the place of going to Europe and seeing these places. It will be of great interest of WWI historians, but less interest to modelers I'm afraid.
Highly recommended.

I want to thank the folks at Casemate in Pennsylvania for this review copy.
​Listings of all the books they distribute are on their web site.