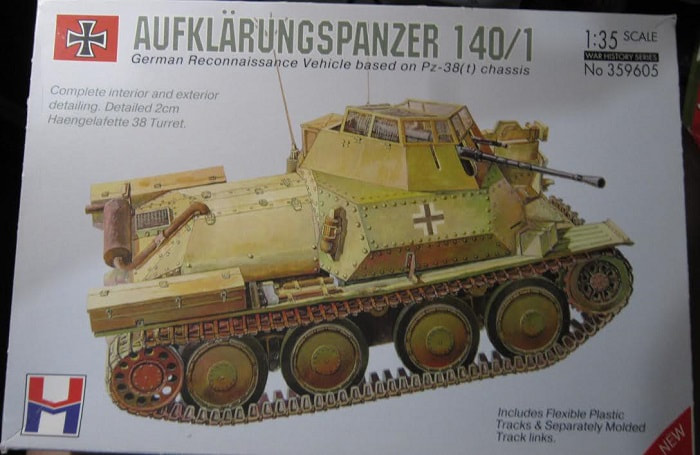 In Box Review of VM 1/35th Scale Aufklarungspanzer 140/1, German Reconnaissance Vehicle Based on the Pz.38(t) Chassis

The Czech built TNHP-S tank was built from 1939 onwards and was one of the most modern vehicles of its time. Production of the vehicle continued under German direction after the occupation onward.

This extremely robust and reliable type formed a quarter of German tank strength in the 1940-41 period. After replacement of later German designs, the excellent chassis was modified and equipped to form a variety of expedient vehicles such as the PanzerJager "Marder" III, Jagdpanzer "Hetzer" and Panzerartillerie "Grille".

The "Hetzer" variant soldiered on with the Swiss Army until the 70's ! A functioning Swiss Hetzer is preserved to this day at the Texas Guard Museum at Camp Mabry in Austin. Not bad for a 1938 design.

A further Pz.Kw. 38(t) variant which came into troop service during 1943 was the Aufkarungspanzer (recon tank) 140/1. These came about initially as field modifications. A new superstructure was fitted to 50 38(t) chassis that were under repair.

On that was mounted a 2 cm Haengelafette turret formarlly used on various armored cars and half-tracks. These vehicles (70 produced) were intended as replacements for the four-wheeled armored car Sd.Kfz. 222 and Sd.Kfz. 250/9 half-track. The open turret was fitted with a 2 cm KwK cannon and a MG 34 machine gun designed for both anti-aircraft and ground attack purposes.

These recon tanks were equipped with a Fu 5 (2 meter) and a Fu 12 (star type aerial) radios.
This 1997 kit, from MV in Russia, is of the standard Sd.Kfz. 140/1. This is the first Pz.Kw. 38(t) type variant produced by VM and probably was not the last. It is molded like the Italeri kit, so that the mold may be used to produce other variants in the future.
​THE KIT:

VM is a model company based in St. Petersburg, Russia.

This kit is the ONLY kit by that company that I have in my stack. I don't know if VM exists any more??

The box art shows a Pz.38(t) 140/1 posed against an all white background. Similar to how Tamiya does all their box arts.

It is overall earth-yellow with a German cross on the sides of the hull.

The box art says the kit has complete interior detailing and a detailed 2 cm turret and individual track links.

One side panel has one paragraph histories of the tank in English, French, German and Russian, with color illustrations of the flag of the countries that speak that language. The copyright of the kit is given as 1997. Kit was made in Russia and is not suitable for children under 3 due to small parts and sharp edges. This is said in multiple languages, including English.

This kit contains 7 dark-grey trees, a PE fret and decals (both in a zip locked cello bag) and all in a large sealed cello bag.

The instructions consist of a single sheet that accordion-folds out into 8 pages in 5 1/2" x 8 1/4" page format.

Page 1 begins with a black and white photo of an actual Pz.38(t) parked outside a factory building, over the history of the tank in 4 languages, including English.

Page 2 through page 7 give a grand total of 12 assembly steps.

The top of page 8 has a single illustration provided for painting and marking purposes.
Humbrol color numbers are below that and markings on the decal sheet are said to be for: 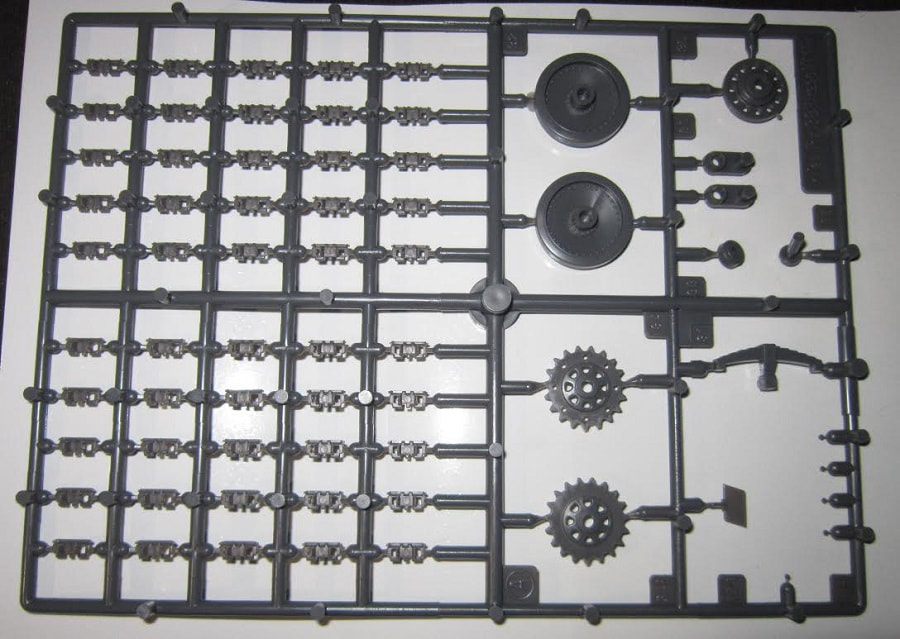 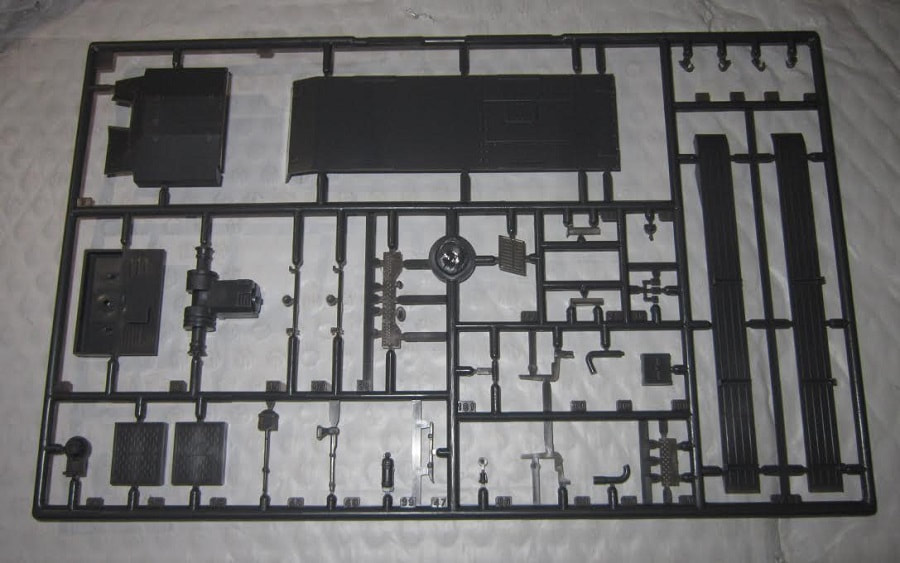 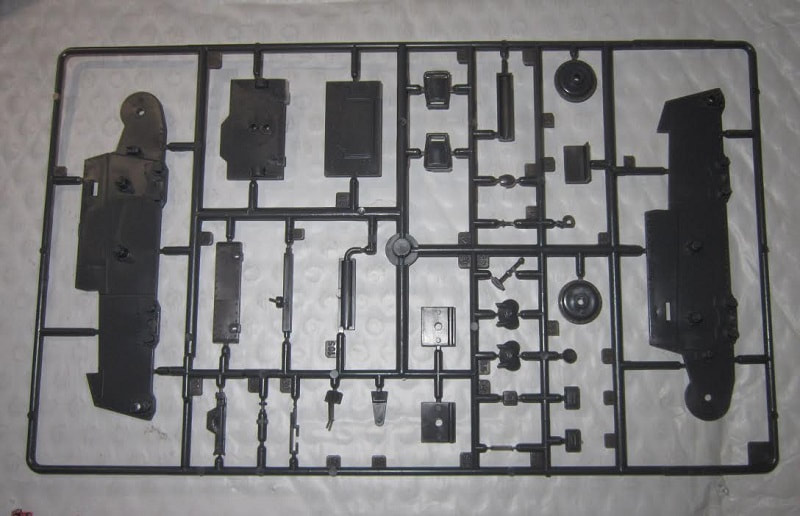 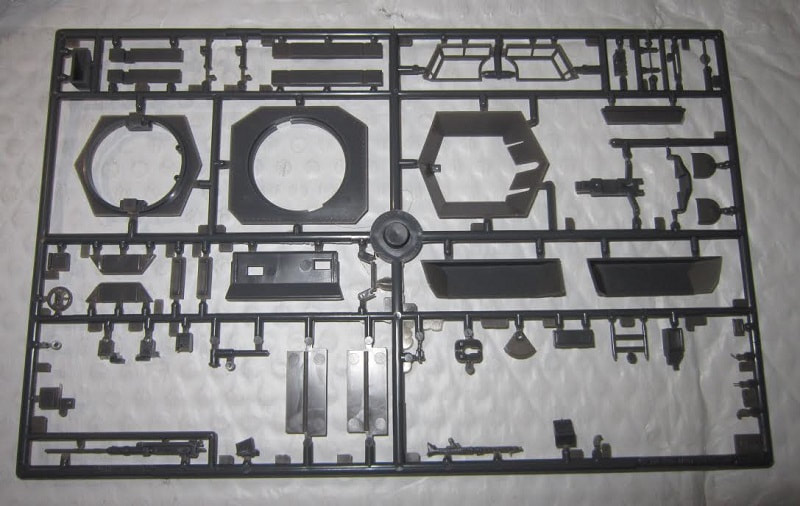 ​The brass PE fret holds 7 parts of the turret screening. 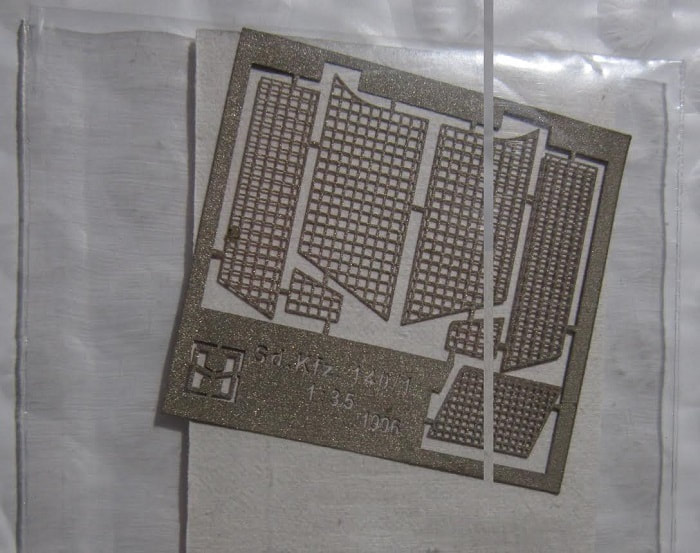 ​
The decal sheet and the instructions complete the kits contents. 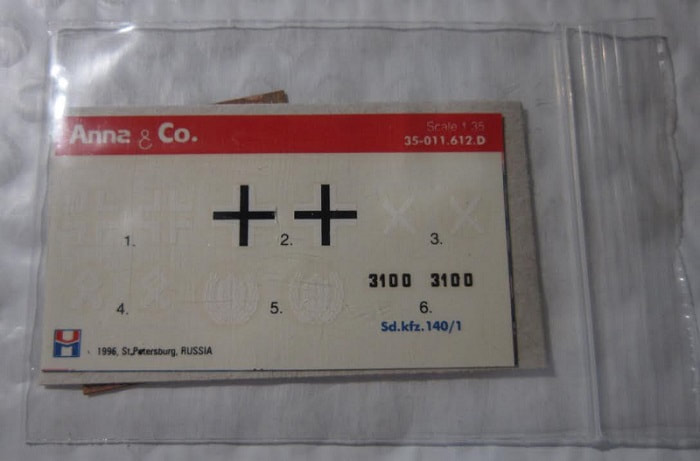 ​This is highly detailed kit, inside and out.